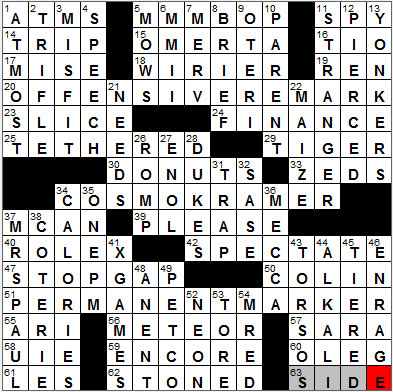 CROSSWORD SETTER: Allan E. Parrish
THEME: Anagram Endings … each of the theme answers ends in a 6-letter word, and all the words are anagrams of each other:

20A. It may be acknowledged with a slap : OFFENSIVE REMARK
34A. TV’s “hipster doofus” : COSMO KRAMER
51A. Bad tool for a toddler to find : PERMANENT MARKER

15. Code that’s dangerous to break : OMERTA
Omerta is a code of honor in southern Italian society. It has been adopted by the Mafia to mean a code of silence designed to prevent a Mafioso from informing to the authorities. For example, the famous Joe Valachi was someone who broke the code of silence in 1963, informing on the New York Mafia. His story was told in the movie “The Valachi Papers”, with Charles Bronson playing Valachi.

17. ___ en scène : MISE
“Mise en scène” is a French phrase, literally meaning “putting on stage”. We use it to describe the setting of props and actors on a stage, or film set, before the action begins.

23. Bad stroke : SLICE
A slice in golf doesn’t head off straight down the fairway, but instead turns off to the right (assuming you’re a right-handed golfer).

33. Reading letters from the end? : ZEDS
The letter named “zed” has been around since about 1400, and it derives from the Greek letter zeta. The spelling and pronunciation of “zee”, used in America today, first popped up in the 1670s.

There are a few locations with the name Reading, but my guess is that the most famous is Reading, the county town of Berkshire in England. Reading is a major railroad junction, and the site of a renowned monastery and a prison. Reading Prison was where American actor Stacy Keach spent 6 months in 1984, convicted of smuggling cocaine into the UK.

34. TV’s “hipster doofus” : COSMO KRAMER
Cosmo Kramer is the outrageous character played by Michael Richards on “Seinfeld”. “Seinfeld” co-creator, Larry David, introduced Kramer into the story, basing the character on real-life comedian Kenny Kramer who used to live across the hall from him.

37. Big name in footwear : MCAN
Thom McAn footwear was introduced in 1922 by the Melville Corporation (now CVS Caremark). The brand was named after a Scottish golfer, Thomas McCann. The brand is epitomized by the comfortable, leather casual and dress shoe, so sales have really been hurt in recent decades by the growing popularity of sneakers.

40. Ticker with cachet : ROLEX
My most prized possession is a stainless steel Rolex watch that my uncle bought while serving with the RAF in Canada during WWII. Rolex watches were made available to the Canadian servicemen at that time as they were shipping overseas. My uncle brought his Rolex home to Ireland after the war. He needed money for booze one weekend and so sold the watch to my Dad, for five pounds. My Dad gave it to me just before he died, as he knew I loved the watch, and my brothers weren’t interested in it. Not so long ago I had it appraised ($3,000!), and my brothers all of a sudden became more interested! Still, it’s not something that will ever be sold, that’s for sure.

“9 to 5” is a really fun movie released in 1980 that tells the story of three female office workers getting their revenge on their sexist boss. It has a great cast: Jane Fonda, Lily Tomlin, Dolly Parton and Dabney Coleman. There is now a stage version of the movie called “9 to 5: The Musical”, that premiered in LA in 2009. I hear it is heading out on tour, and I that’s one I definitely have to see …

55. N.L. West team, on scoreboards : ARI
The Arizona Diamondbacks joined Major League Baseball’s National League in 1998. By winning the World Series in 2001 the Diamondbacks became the fastest expansion team to do so in Major League history.

56. One seen in a shower : METEOR
A shooting star is what we call the visible path of a meteoroid as is it enters the earth’s atmosphere. Almost all meteoroids burn up, but if one is large enough to survive and reach the ground, we call it a meteorite. The word “meteor” comes from the Greek “meteōros” meaning “high in the air”.

57. Ramirez of “Grey’s Anatomy” : SARA
Sara Ramirez is a Mexican-American actress, known for playing Callie Torres in “Grey’s Anatomy”. In 2005 she won a Tony Award for her portrayal of the Lady of the Lake in the original production of “Spamalot” on Broadway.

60. 2006-08 heavyweight champion Maskaev : OLEG
Oleg Maskaev is a professional boxer from Russia. Maskaev now lives in the US in West Sacramento, California.

61. Article in the Louvre? : LES
The Musée du Louvre has the distinction of being the most visited art museum in the whole world. The collection is housed in the magnificent Louvre Palace, which was the seat of power in France until 1682 when Louis XIV moved to Versailles.

Down
6. When the Salt Lake City Olympics took place : MMII
The last Olympic Games held in the US was in Salt Lake City in 2002, a winter games. That made Utah the fifth US state to host the Olympics.

7. Longtime first name in TV talk : MERV
Merv Griffin was quite the entertainer, truly a mogul in the business. He started his career as a singer on the radio during the big band era. In the sixties he hosted his own talk show, and then famously developed such great game shows as “Jeopardy!” and “Wheel of Fortune”.

9. Comical Cheri : OTERI
Cheri Oteri was the SNL cast member who regularly appeared with Will Farrell in the skit featuring a pair of Spartan cheerleaders.

10. Adidas vis-à-vis Reebok : PARENT
The brand name “Adidas” dates back to when Adolf “Adi” Dassler started making his own sports shoes in his mother’s laundry room in Bavaria after returning from WWI. With his brother, Adi founded Dassler shoes. The company’s big break came in 1936 at the Berlin Olympics when Adi persuaded American sprinter Jesse Owens to use his shoes, and with the success of Jesse Owens came success for the fledgling shoe company. After WWII the brothers split, acrimoniously. Adi’s brother, Ru-dolf Da-ssler, formed “Ruda” shoes (later to become Puma), and Adi Das-sler formed “Adidas”.

13. Jon Voight’s New York birthplace : YONKERS
The city of Yonkers is built on land that was granted to Adriaen van de Donck in 1645. Van der Donck was known by locals as the “young gentleman” or “Johnkeer” in Dutch. It is the word “Jonkheer” that gives us the name “Yonkers”.

27. Organic compound : ENOL
An enol is an alkene with a hydroxyl group, sort of part-alkene, part-alcohol. The term “enol” therefore, is a portmanteau of “alkene” and “alcohol”.

28. Scrappers put them up : DUKES
“Dukes” is a slang term for “hands”, as in “put up your dukes”. The term is of uncertain etymology.

32. Response facilitator: Abbr. : SASE
One type of enclosure (ENC) in a letter might be a self-addressed stamped envelope (SASE).

36. Endpoint of pilgrims’ progress? : MECCA
Mecca is in the Makkah province of Saudi Arabia and is the holiest city in Islam. Every year, several million Muslims perform the Hajj, a holy pilgrimage to Mecca.

37. Big name in frozen food : MRS PAUL
In 1946, Edward Piszek started to sell devilled crab cakes in a bar in Philadelphia. Sales were less than anticipated, so Piszek had to freeze most of his stock. When he discovered that the thawed crab cakes tasted almost as good as the fresh, then he decided to start a frozen seafood business. A friend called John Paul gave him a $350 contribution so he named his brand after his investor’s mother, Mrs. Paul. Pizsek bought out his partner in the fifties and sold the company to Campbell Soup in 1982, for about $70 million.

38. Circle : COTERIE
A “coterie” is a small group of friends who hang out together, often sharing a common interest. The term comes to us from French where a coterie was an organization of peasants all of whom held land owned by the same feudal lord.

41. Snowboarders compete in them : X GAMES
The X Games are annual events, with a Summer X Games held every year as well as a Winter X Games. It’s very much a commercial venture, with all aspects controlled by the TV station ESPN. The games focus on extreme action sports, like skateboarding and freestyle motocross in the summer, and various extreme snowboarding events in the winter.

43. Some Rodin pieces : TORSOS
“Torso” is an Italian word meaning the “trunk of a statue”, which we imported into English.

The Rodin Museum is my favorite of all the museums in Paris. The Musée Rodin is very special in that the building and garden that hold all of the works was once Rodin’s actual home and studio. Well worth a visit if you’re in the City of Lights …

48. Apropos of : ANENT
“Anent” is a preposition meaning “regarding, concerning”.

Apropos comes into English directly from French, in which “à propos” means “to the purpose”.

54. He talked only to Wilbur : MR ED
“Mister Ed” first aired in 1961 and ran for almost five years. It was a very successful show (and even made it to Ireland!). Mister Ed, the talking horse, was a palomino that had the real name of Bamboo Harvester. Mister Ed’s “voice” was that of actor Allan “Rocky” Lane, a star of a lot of B-movie westerns from the forties and fifties. In the show, Mister Ed would only talk to the lead (human) character, Wilbur, played by Alan Young, leading to some hilarious situations. Mister Ed had a stunt double and stand-in for the show, another horse called Pumpkin. Pumpkin later played the horse that made frequent appearances on the show “Green Acres”.