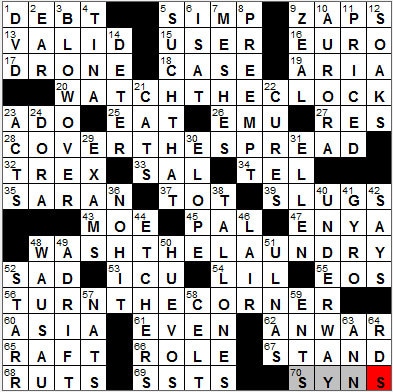 CROSSWORD SETTER: John Dunn
THEME: Synonyms … each of the theme answers is in the form “Word” THE “Synonym of the first word”:


Today’s Wiki-est, Amazonian Googlies
16. Replacement for the mark, franc and lira : EURO
The European Union today stands at a membership of 27 states. The Euro is the official currency of only 16 of the 27. The list of states not using the Euro includes the UK, Denmark, Sweden and Norway.

26. Outback bird : EMU
The emu has had a tough time in Australia since man settled there. There was even an “Emu War” in Western Australia in 1932 when migrating emus competed with livestock for water and food. Soldiers were sent in and used machine guns in an unsuccessful attempt to drive off the “invading force”. The emus were clever, breaking their usual formation and adopting guerrilla tactics, operating as smaller units. After 50 days of “war”, the military withdrew. Subsequent requests for military help for the farmers were ignored. The emus had emerged victorious …

27. Hi-___ monitor : RES
In the digital world, resolution of a display, television, image etc. is defined by the number of pixels that can be displayed in a standard area (say a square inch). The emphasis today is on producing larger area displays/televisions, i.e increasing the number of pixels simply by increasing the size of the screen. In the past couple of decades the emphasis was on adding more pixels within the same screen size to increase resolution. That would just be wasted effort these days as further increases in resolution cannot be perceived by the eye. Now that TV’s are capable of displaying such high resolutions, broadcasters are responding by producing a video signal of “higher resolution”, that they call high-definition television, HDTV.

32. Big-jawed dinosaur, for short : T. REX
The Tyrannosaurus rex (usually T. rex) was a spectacular looking dinosaur. Tyrannosaurus comes from the Greek words “tyrannos” (tyrant) and “sauros” (lizard), and the “rex” is of course Latin for “king”. They were big boys, measuring 42 feet long and 13 feet tall at the hips, and weighing 7.5 tons.

33. Erie Canal mule : SAL
The song “Fifteen Miles on the Erie Canal” was written in 1905. The lyrics are nostalgic and look back to the days when traffic on the canal was pulled by mules, bemoaing the introduction of the fast-moving engine-powered barges. The first line is “I’ve got an old mule and her name is Sal”.

35. Brand of kitchen wrap : SARAN
What’s known as plastic wrap in America, we call cling-film in Ireland. Plastic wrap was one of those unintended inventions, a byproduct of a development program to create a hard plastic cover for cars.

43. One of the Three Stooges : MOE
If you’ve seen a few of the films starring “The Three Stooges” you’ll have noticed that the line up changed over the years. The original trio was made up of Moe and Shemp Howard (two brothers) and Larry Fine (a good friend of the Howards). This line up was usually known as “Moe, Larry and Shemp”. Then Curly Howard replaced his brother when Shemp quit the act, creating the most famous trio, “Moe, Larry And Curly”. Shemp returned when Curly had a debilitating stroke in 1946, and Shemp stayed with the troupe until he died in 1955. Shemp was replaced by Joe Besser, and then “Curly-Joe” DeRita. When Larry had a stroke in 1970, it effectively marked the end of the act.

47. Grammy winner from County Donegal, Ireland : ENYA
Enya’s real name is Eithne Patricia Ní Bhraonáin, which can translate from the Irish into Enya Brennan. Her Donegal family (in the northwest of Ireland) formed a band called Clannad, which included Enya. In 1980 Enya launched her very successful solo career. And she sure does turn up a lot in crosswords!

54. “___ Abner” : LI’L
“Li’l Abner” was created and drawn by Al Capp for over 43 years starting in 1934. Al Capp stopped producing the strip in 1977, largely due to illness (he died from emphysema two years later). As the strip finished up, he went so far as to apologize to his long-standing fans, saying that he should have stopped 3-4 years earlier as he felt that the quality of his work had gone down in those latter years.

55. Line of Canon cameras : EOS
I’ve been using Canon EOS cameras for decades now, and have nothing but good things to say about the cameras and the lenses. The EOS name stands for Electro-Optical System, and was chosen because it evokes the name of Eos, the Titan goddess of dawn from Greek mythology.

60. Where the Himalayas are : ASIA
The magnificent Himalaya range of mountains in Asia takes its name from the Sanskrit for “abode of snow”. Geographically, the Himalayas separate the Indian subcontinent from the Tibetan Plateau to the north.

62. Egypt’s Sadat : ANWAR
Anwar Sadat was the third President of Egypt right up to the time of his assassination in 1981. He won the Nobel Peace Prize in 1978 along with Israeli Prime Minister Menachem Begin, for their role in crafting the Israel-Egypt Peace Treaty of 1978 at Camp David. It was this agreement that largely led to Sadat’s assassination two years later.

69. Concordes, for short : SSTS
The most famous Supersonic Transport (SST) was the Concorde, a plane that’s no longer flying. Concorde had that famous “droop nose”. The nose was moved to the horizontal position during flight to create the optimum aerodynamic shape thereby reducing drag. It was lowered during taxi, takeoff and landing, so that the pilot had better visibility. The need for the droop nose was driven largely by the delta-shaped wings. The delta wing necessitates a higher angle of attack at takeoff and landing than conventional wing designs, so the pilot needed the nose lowered so that he or she could see the ground.

70. Roget offerings (abbr.) … or, loosely, the first and last words of 20-, 28-, 48- and 56-Across : SYNS
Peter Mark Roget was an English lexicographer. He was an avid maker of lists, apparently using the routine of list-making to combat depression, a condition he endured for most of his life. He published his famous thesaurus in 1852, with revisions and expansions being made years later by his son, and then in turn by his grandson.

Down
1. Netflix rental : DVD
The acronym DVD doesn’t actually stand for anything these days, although it originally was short for Digital Video Disk. The use of the word “video” was dropped as DVDs are no longer limited to storing video content.

Netflix was founded in Los Gatos, California in 1997. The company delivered it’s billionth DVD in 2007. I presume the renter wasn’t charged for that movie …

4. Funny Fey : TINA
I was shocked to read that Tina Fey has a scar on her face, a few inches long on her left cheek, the result of a childhood “slashing” incident. When she was just five years old, playing in the front yard of her house, someone just came up to her and slashed her with a knife. How despicable!

10. ___ borealis : AURORA
The spectacular aurora phenomenon is seen lighting up the night sky at both poles of the earth (the Aurora Borealis in the north, and the Aurora Australis in the south). The eerie effect is caused by charged particles colliding with atoms at high latitudes.

23. Each of Shakespeare’s plays has five : ACTS
Shakespeare adopted the five-act structure for all of his plays, using the same format that was used by Seneca for his Roman tragedies. Given five acts, the plays tend to unfold as follows:

31. Talk show host DeGeneres : ELLEN
Ellen DeGeneres is a very, very successful TV personality, having parlayed her career in stand-up comedy into lucrative gigs as an actress and talk show host. Back in 1997 DeGeneres chose the “Oprah Winfrey Show” to announce that she was a lesbian. Her character on “The Ellen Show” also came out as a lesbian, in a scene with her therapist, played by Oprah Winfrey. Nice twist!

41. Greek sandwich : GYRO
A gyro is a traditional Greek dish, a sandwich made with pita bread containing meat, tomato, onion and tzatziki (a yogurt and cucumber sauce). The meat for gyros is usually roasted on a tall vertical spit, and is sliced from the spit as required. The name “gyro” comes from the modern Greek word “gyros” meaning “circle”, a reference to the meat turning as it is grilled, in a rotating circular motion.

52. Ringo who sang “Yellow Submarine” : STARR
Ringo Starr’s real name is Richard Starkey. Before he joined the Beatles (replacing drummer Pete Best), Starkey played with the Raving Texans. It was with the Raving Texans that he adopted the name “Ringo Starr” because he wore a lot of rings, and he thought it sounded “cowboyish”. Back then his drum solos were billed as “Starr Time”.

Paul McCartney wrote “Yellow Submarine” with Ringo Starr in mind as the lead singer. As he said himself, because it was for Ringo, he wrote something that wasn’t “too rangey”. It turned out be more like a children’s song, and a couple of years later in 1968, the song was used as the title for an animated film. The song is full of sound effects, including John Lennon blowing through a straw into a bowl of water to create a “bubbling”, and Lennon and McCartney speaking into tin cans to create the sound of the captain and officer exchanging orders. And at one point in the recording, a backing vocalist leads everyone around the studio on a conga line, while pounding on a bass drum. What a way to make money, and lots of it …

57. D.C. team, informally : NATS
The Washington Nationals baseball team started out life as the Montreal Expos in 1969. The Expos moved to Washington in 2005, becoming the Nats. There are only two Major Leagues teams that have never played in a World Series; one is the Mariners, and the other the Nats.

58. Hibernian, for one : CELT
“Hibernia” is the Latin name for the island of Ireland.

59. Tolkien’s talking tree race : ENTS
Ents are those tree-like creatures that live in J. R. R. Tolkien’s Middle-earth, in his series of books “The Lord of the Rings”. “Ent” is an Old English word for “giant”.