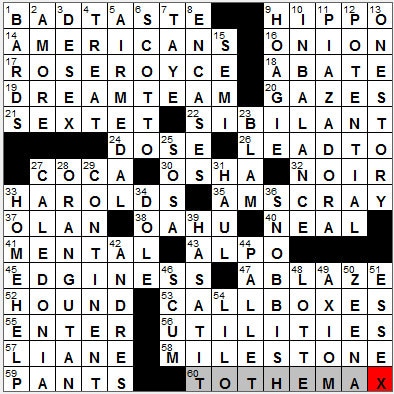 
Today’s Wiki-est, Amazonian Googlies
Across
9. One form of the Egyptian god Set : HIPPO
In Egyptian mythology, Set was a god who killed his brother, Osiris.

17. 1970s-’80s band whose debut album was the soundtrack to a Richard Pryor film : ROSE ROYCE
Rose Royce chose the band’s name to sound like the Rolls Royce car. Rose Royce’s big break came when the group was asked to provide the musical score to the 1976 movie “Car Wash”. The theme song “Car Wash” made it to number one in the charts and was a huge disco era hit.

21. The friends on “Friends,” e.g. : SEXTET
When the incredibly successful sitcom “Friends” was in development it was given a working title “Insomnia Cafe”. This was changed to “Friends Like Us”, before final going to air as “Friends”.

22. Like “sissies” : SIBILANT
“Sibilant” is a word describing a sound of speech, the sound of an “s” or “z”, a hissing sound. The word “sissies” has three sibilant sounds.

27. Something to chew on : COCA
The coca plant is native to South America and is similar in appearance to a blackthorn bush. Coca leaves have been chewed by humans for centuries, perhaps even as far back as 3,000 years ago. Chewing the leaves apparently produces a pleasurable numb sensation in the mouth and a pleasant taste. The most famous alkaloid in the leaf is cocaine, but this wasn’t extracted in its pure form until the mid-1800s. The extracted cocaine was used in a medicines and tonics and other beverages, including the original version of Coca-Cola! Before 1903, a glass of Coke would contain about 9mg of cocaine. Coca-Cola still uses coca leaves, as the flavor is prized, but the cocaine is extracted before it arrives at the bottling plants.

30. Factory-inspecting org. : OSHA
The Occupational Safety and Health Administration (OSHA) was created in 1970 during the Nixon administration. OSHA regulates workplaces in the private sector, and regulates just one government agency, namely the US Postal Service.

32. Genre spoofed by “The Cheap Detective” : NOIR
The expression “film noir” has French origins, but only in that it was “created” by a French critic in describing a style of Hollywood film. The term, meaning “black film” in French, was first used by Nino Frank in 1946. Film noir often applies to a movie with a melodramatic plot and a private eye or detective at its center. Good examples would be “The Big Sleep” and “D.O.A”.

33. ___ Chicken Shack (Chicago-based restaurant chain) : HAROLD’S
Harold’s Chicken Shack is a chain of fried chicken restaurants in the Chicago area. The
first restaurant in the chain was opened by Harold Pierce in 1950.

35. “Make yourself scarce!” : AMSCRAY
Pig Latin is in effect a game, whereby one takes the first consonant of an English word and moves it to the end of the word, and then adds the letters “ay”. So the Pig Latin for the word “nix” is “ix-n-ay”, and for “scram” is “am-scr-ay”

37. “The Good Earth” wife : O-LAN
Pearl S. Buck’s novel “The Good Earth” won a Pulitzer in 1932, and helped Buck win the Nobel Prize for literature a few years later. The story tells of life in a Chinese village and follows the fortunes of Wang Lung and his wife O-Lan. Although “The Good Earth” has been around for decades, it hit the bestseller list again in 2004 when it was a pick for Oprah’s Book Club.

38. Obama’s birthplace : OAHU
Despite rumors to the contrary, I am pretty sure that Barack Hussein Obama II was indeed born in Hawaii. President Obama was born on August 4, 1961 at Kapi’olani Maternity & Gynecological Hospital in Honolulu, Hawaii.

40. Newman’s “Hud” co-star : NEAL
Patricia Neal won her Best Actress Oscar relatively late in her career, for playing the middle-aged housekeeper in 1963’s “Hud”. A few years later she was offered the role of Mrs. Robinson in “The Graduate” but turned it down. Famously, Neil had an affair with Gary Cooper who was married at the time. She became pregnant with his child but he persuaded her to have an abortion. Not long afterwards Neil married British writer Roald Dahl (of “Willy Wonka” fame) and the couple had five children together before divorcing in 1983.

43. Brand once pitched by Lorne Greene : ALPO
The Alpo name is a brand of dog food originally produced by Allen Products, founded in 1936, with “Alpo” being an abbreviation for “Allen Products”. Lorne Greene used to push Alpo in television spots, as did Ed McMahon, and Garfield the Cat would you believe?

45. Tendency to push the envelope : EDGINESS
The phrase to “push the envelope” is a relatively recent one, only dating back to the 1970s. It was popularized in Tom Wolfe’s celebrated book “The Right Stuff”, as it was oft-quoted during the space program. The “envelope” in question was the “mathematical envelope” that had to be “pushed” in order to make the space program successful.

56. Some Monopoly holdings : UTILITIES
The commercial game of Monopoly is supposedly a remake of “The Landlord’s Game” created in 1903 by a Quaker woman called Lizzie Phillips. Phillips used her game as a tool to explain the single tax theory of American economist Henry George. The Landlord’s Game was first produced commercially in 1924. The incredibly successful derivative game called Monopoly was introduced in 1933 by Charles Darrow, making him a very rich man when Parker Brothers bought the rights to the game just two years later in 1935.

57. Former NPR host Hansen : LIANE
Liane Hansen was the very capable host of Weekend Edition Sunday, who retired quite recently from broadcasting. She is married to a fellow NPR broadcaster Neil Conan, although the two have announced that they are in the process of divorcing.

Giacomo Casanova was an 18th century adventurer from Venice. We know so much about him, and his reputation as a womanizer, because he left us his autobiography “Histoire de ma vie” (Story of My Life). A guy recounting stories of his love life and conquests. All true, I am sure …

6. Callas contemporary : SCOTTO
Renata Scotto is an Italian soprano, now retired from the stage, working behind the scenes as a successful opera director. Amongst all the accolades for her performances, Scotto did once have to deal with a hostile audience. In 1974 she was singing Eleni in Verdi’s “I Vespri Siciliani” when a clique of Maria Callas fans continuously called out “Maria, Maria” and “Brava, Callas”. Maria Callas was actually in a box, watching Scotto perform, and refused to acknowledge the interruption. At the end of the opera, Callas rose graciously and led a standing ovation for Ms. Scotto’s performance.

7. “Private Practice” actor Diggs : TAYE
Taye Diggs is an actor most associated with the Broadway show “Rent”, in which he played the nasty landlord Benny. He now costars on the television show “Private Practice”.

9. Long lunch? : HOAGIE
Hoagy is another name for a submarine sandwich. The term “hoagy” (or hoagie) originated in Philadelphia, apparently introduced by Italians working in the shipyards during WWI. The shipyards were located on Hog Island, and the sandwich was first called the Hog Island, which morphed into the hoagy.

11. 1982 Razzie winner for “Butterfly” : PIA ZADORA
Pia Zadora is an American actress and singer. Zadora’s most famous role was in the 1982 film “Butterfly” in which she worked with Orson Welles and Stacey Keach. The film was based on the novel “The Butterfly” by James M. Cain and deals with the difficult subject of father-daughter incest.

Razzie is the familiar name for the Golden Raspberry Award, an award presented annually for the worst in the world of film. The Razzies have been presented on the day before the Oscars since 1981.

25. Six-time Silver Slugger winner : SOSA
Sammy Sosa was right in the public eye in 1998 when he and Mark McGwire were vying to be the first to surpass the home run record held by Roger Maris. McGwire fell out of public favor due to stories of steroid abuse (stories which he later admitted were true) while Sosa fell of out favor when he was found to be using a corked bat in a 2003 game.

27. Scotland, to poets : CALEDONIA
Caledonia is the Latin word for Scotland.

28. Literally, “man of the forest” : ORANGUTAN
Orangutans are arboreal creatures, in fact the largest arboreal animals known to man. They are native to Indonesia and Malaysia, living in the rain forests. Like many animals in rain forests these days, orangutans are endangered, with only two species surviving. The word “orangutan” is Malay, meaning “man of the forest”.

34. Company whose mascot is Bobby Banana : DOLE
James Dole lent his name to today’s Dole Food Company. James Dole was known as the Pineapple King, as he developed the pineapple industry in Hawaii and founded the Hawaiian Pineapple Company, the forerunner to the Dole Food Company. Dole might have had some help on the way, as he was cousin to Sanford B, Dole, President of the Republic of Hawaii from 1894 to 1900.

48. Werther’s love in a Goethe novel : LOTTE
“The Sorrows of Young Werther” is a novel by Johann Wolfgang von Geothe, first published in 1774. The piece is described as being loosely autobiographical, and it brought fame and success to Goethe as a writer within his own lifetime.

Johann Wolfgang von Goethe was a German writer (among other things!). His most famous work is probably his play “Faust”. This epic work was published in parts, starting in 1808. The work was only published in toto after his death in 1832.

51. Robert Devereux’s earldom : ESSEX
Robert Devereux was the 2nd Earl of Essex, and a favorite in the court of Queen Elizabeth I of England. Eventually however, Essex fell foul of the government and was found guilty of treason. He was executed on Tower Green in the Tower of London. Famously, his executor took three strokes of the axe to complete the beheading. Essex was the last person to be beheaded at the Tower.

54. Title character of a 2002 Disney film : LILO
“Lilo & Stitch” was released by Disney in 2002. Compared to other Disney feature-length cartoons, “Lilo & Stitch” was relatively cheaply produced, using the voices of lesser known actors. One interesting change had to take place in the storyline during production, when Lilo was meant to fly a Jumbo Jet through downtown Honolulu in one sequence. This was replaced with a sequence using a spaceship instead, as the producers were sensitive to public sentiment after the September 11 attacks.