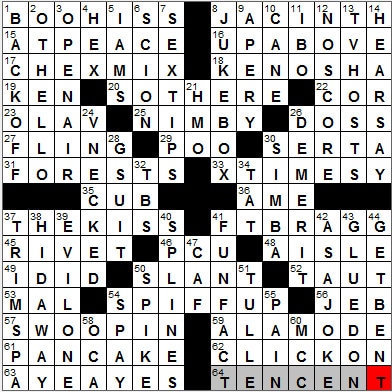 
Today’s Wiki-est, Amazonian Googlies
Across
8. Reddish-orange gem : JACINTH
Jacinth is a red transparent form of the mineral zircon that is of gemstone quality. Jacinth takes its name from the hyacinth plant which has flowers of the same color.

17. High-carb party snack : CHEX MIX
The original Chex cereal was introduced in 1937 by Ralston Purina. Ralston Purina had a logo with a checkerboard square on it, which gave the pattern to the cereal as well as its name. Chex used characters from the “Peanuts” comic strip in its advertising for many years.

18. Midwest birthplace of Orson Welles and Don Ameche : KENOSHA
Kenosha, Wisconsin is a city on the western shore of Lake Michigan. Given its location, Kenosha has strong ties with both Milwaukee and Chicago. The name Kenosha is an anglicized form of “gnozhé”, the Native American name for an early settlement in the area that translates as “place of the pike”.

19. Berry of “Mayberry R.F.D.” : KEN
Ken Berry is an actor, singer and dancer from Moline, Illinois. Berry is most associated with his role as single parent Sam Jones on television’s “Mayberry RFD”. Berry led the cast of this “Andy Griffiths Show” spin-off, in effect taking over from Andy Griffith when he decided to leave the original show.

The Roman Emperor Hadrian is best remembered today for building Hadrian’s Wall, a barrier marking the northern limit of Roman Britain. Construction of the stone wall was started in AD 122, and the end result was the most fortified border in the whole of the Roman Empire. Much of Hadrian’s Wall can still be seen today, and I’ve had the privilege of walking along part of it when visiting Northern England.

23. Norway’s Order of St. ___ : OLAV
Of the many kings of Norway named Olaf/Olav (and there have been five), Olaf II is perhaps the most celebrated as he was canonized and made patron saint of the country. Olaf II was king from 1015 to 1028, and was known as “Olaf the Big” (or Olaf the Fat) during his reign. Today he is more commonly referred to as “Olaf the Holy”. After Olaf died he was given the title of Rex Perpetuus Norvegiae, which is Latin for “Norway’s Eternal King”.

26. Avoid work, in Britain : DOSS
“Doss” is a slang word used in the UK for “sleep”. What we’d call a flophouse here in the US, an establishment offering a bed for the night and little else, is called a doss-house on the other side of the Atlantic. By extension, the term can also be used to mean “to avoid work”.

30. Perfect Day maker : SERTA
Serta was founded in 1931 when a group of 13 mattress manufacturers came together, essentially forming a cooperative. Today, the company is owned by eight independent licensees in a similar arrangement. Interesting …

John-Paul Sartre was a leading French philosopher, as well as a writer and political activist. He is one of the few people to have been awarded a Nobel Prize who refused to accept it. He was named winner of the prize for Literature in 1964, for his first novel “Nausea”. Before his win, Sartre knew that his name was on the list of nominees so he wrote to the Nobel Institute and asked to be withdrawn from consideration. The letter somehow went unread, so he found himself having to refuse the award after he had been selected.

37. Musée Rodin masterpiece : THE KISS
“The Kiss” is a most beautiful sculpture created in 1889 by Auguste Rodin. I’ve had the privilege of standing beside the original, life-size marble work on a few occasions as it is housed in the Rodin Museum, my favorite of all museums in Paris. The Musée Rodin is very special in that the building and garden that hold all of the works were Rodin’s actual home and studio. Well worth a visit if you make it to Paris …

41. Home of the U.S. Army Airborne Forces : FT BRAGG
Fort Bragg in North Carolina is a very large Army installation that covers over 250 square miles. The base is named for General Braxton Bragg, the native North Carolinian who commanded the Confederate Army forces during the Civil War.

54. Make stylish : SPIFF UP
A spiff is a well-dressed man.

56. Bush much seen around Florida : JEB
I always thought that Jeb was an American nickname for James or Joseph but I must be wrong, because George and Barbara’s son John Ellis Bush is called “Jeb”. A kind blog reader has suggested the the name “Jeb” may have been chosen as JEB are the initials of John Ellis Bush.

59. Stylish : A LA MODE
In French “à la mode” simply means “fashionable”. In America it has come to describe a way of serving pie, usually with ice cream or, as I recall from my days in Upstate New York, with cheese.

64. ___ Beer Night (1974 baseball promotion that ended in a riot) : TEN CENT
In a 1974 game with the Texas Rangers, the Cleveland Indians management ran a promotion offering fans as many beers as they wanted for just 10 cents each (about 47 cents today). The crowd became more and more unruly as the game progressed, with several fans running onto the field individually and others throwing objects from the stands. At the bottom of the ninth, a fullblown riot developed, with fans crowding onto the field, many wielding knives, chains and ripped up stadium seats. The players had to run for their lives. The Indians forfeited that game, even though the score was tied when play was halted.

Down
2. His opening line is “‘Tis better as it is” : OTHELLO
The most famous Moor in literature has to be Othello, the title character in William Shakespeare’s tragedy “Othello, the Moor of Venice”. The word “Moor” describes various peoples of North Africa, usually of the Muslim faith. At the height of their geographic influence the Moors occupied much of the Iberian peninsula, calling it Al Andalus (from which modern Andalusia gets its name).

3. Like some markets and headphones : OPEN-AIR
Open-air headphones have the back of the earcups open, allowing in some ambient sound. Apparently this gives a more natural listening experience.

4. Bit of witchery : HEX
“Hexen” is a German word meaning “to practice witchcraft”. The use of the word “hex” in English started with the Pennsylvania Dutch in the early 1800s.

5. Brand with a paw print in its logo : IAMS
Iams dog food was produced by the animal nutritionist Paul Iams. He felt that household pets were suffering somewhat by being fed a diet of table scraps, so he developed a dry dog food that he felt was more nutritious and suitable for pet dogs. He founded the Iams company, now part of Proctor & Gamble, in 1946.

6. Progeny : SCION
Scion comes from the old French word “sion” or “cion”, meaning “a shoot or a twig”. In botanical terms today, a scion is used in grafting two compatible plants together. In grafting, one plant is selected for its root system (the “rootstock”), and the other plant is selected for its stems, leaves and fruit (the “scion”). The term scion migrated naturally into the world of family history. A scion is simply a descendant, a son or a daughter and therefore a branching point in the family tree.

7. Advice from Dr. Ruth : SEX TIPS
Dr. Ruth Westheimer is a German sex therapist who made a name for herself as a media personality. Westheimer was the daughter of Orthodox Jews and was sent away from Germany by her family just before WWII. She ended up in Palestine and participated in the 1948 Palestine War serving as a scout and sniper. She was seriously wounded, and spent several months unable to walk. She moved to France in 1950, and soon after arrived in the US. It was in the US where she did her training as a sex therapist.

8. Target of Fonzie’s fist bumps : JUKEBOX
Fonzie is a character in the sitcom “Happy Days” that was originally aired from 1974 to 1874. The Fonz was written as a secondary character, but eventually took over the show. Fonzie is of course played by Henry Winkler.

11. Nigerian people : IBO
The Igbo (or Ibo) people are an ethnic group living in southeastern Nigeria.

Like all of Michael Moore’s films, his 2007 documentary “Sicko” tends to polarize his audience. The film deals with the health care system in the United States, comparing it with the systems in place in other countries. Having lived in two of the countries covered in the movie, France and the UK, I can attest that the basic facts presented about those foreign health care systems are accurate. Now Moore’s style of presentation of those facts … that might give rise to some debate …

28. It might prevent a blackout : G-SUIT
A G-suit is needed when astronauts and aviators are subject to high accelerations. Such acceleration can cause blood to pool in the lower part of the body, reducing the supply to the brain and possibly leading to a black-out. A G-suit is basically a special pair of tight-fitting pants that are fitted with inflatable bladders. The bladders inflate during high accelerations, tightening around the legs and abdomen, reducing the amount of blood pooling.

30. Friend of Pumbaa : SIMBA
Simba is the main character in the Disney animated feature, “The Lion King”. “Simba” is the Swahili word for “lion”.

Timon and Pumbaa are a pair of characters in Disney’s “The Lion King”, a meerkat and warthog.

34. Skin pic? : TAT
The word “tattoo” was first used in English in the writings of the famous English explorer Captain Cook. In his descriptions of the indelible marks adorning the skin of Polynesian natives, he anglicized the Tahitian word “tatau” into our “tattoo”.

37. Big name in weight-loss pills : TRIMSPA
TrimSpa is a dietary supplement touted as a weight loss aid. Its active ingredients are stimulants (like caffeine). TrimSpa became quite famous when the manufacturers hired Anna Nicole Smith as spokesperson for the product.

44. Bart Simpson catchphrase : GET BENT
Bart Simpson is the main character in television’s “The Simpsons”. Bart’s name was chosen by the writers as it is an anagram of “brat”.

The word “tutu”, used for a ballet dancer’s skirt, is actually a somewhat “naughty” term. It came into English from French in the early 20th century. The French “tutu” is an alteration of the word “cucu”, a childish word for “cul” meaning the “bottom, backside”.

58. Andean tuber : OCA
The plant called an oca is also known as the New Zealand Yam. The tubers of the oca are used as a root vegetable.