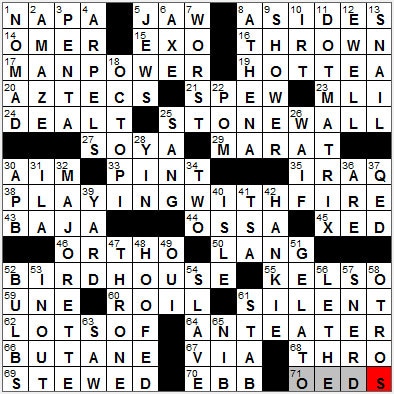 CROSSWORD SETTER: Susan Gelfand
THEME: PLAYING WITH FIRE … each of the theme answers has two components, which can be combined with the word FIRE:

17A. *Staffing level : MANPOWER (fireman & firepower)
25A. *Refuse to cooperate : STONEWALL (firestone & firewall)
38A. Inviting danger … the end of which can precede each half of the answer to each asterisked clue : PLAYING WITH FIRE
52A. *Woodcraft hobbyist’s creation : BIRDHOUSE (firebird & firehouse)
64A. *Toothless mammal : ANTEATER (fire ant & fire eater)

14. Counting of the ___ (observance after Passover) : OMER
In the Jewish tradition, the 49 days before Passover and before Shavout are verbally counted in the practice known as counting of the Omer.

19. Flu sufferer’s quaff : HOT TEA
Influenza is an ailment that is caused by a virus. The virus is readily inactivated by the use of soap, so washing hands and surfaces is especially helpful in containing flu outbreaks.

20. Montezuma’s people : AZTECS
The Aztec people of Central America dominated the region in the 14th – 16th centuries. Two traits of the Aztec people are oft cited today. They built some magnificent pyramids, and they also engaged in human sacrifice. The two traits were linked in a way … for the consecration of the Great Pyramid of Tenochtitlan, 84,400 prisoners were sacrificed over a period of four days.

25. *Refuse to cooperate : STONEWALL (firestone & firewall)
Firestone is another name for flint or pyrite, a mineral that was used to light a fire.

27. Protein-rich bean : SOYA
What are known as soybeans here in the US are called soya beans in most other English-speaking countries. So, I drink soy milk here in America, but when I am over in Ireland I drink “soya milk”.

29. Revolutionary killed in his bathtub : MARAT
Jean-Paul Marat was a prominent figure in the French Revolution. He was famously murdered in his bath by a young woman who was a Royalist, an event that was immortalized in a celebrated painting by Jacques-Louis David

35. “Axis of evil” member : IRAQ
The “axis of evil” is a term originally used by President George W. Bush, describing the regimes in Iran, Iraq and North Korea.

43. Tijuana’s peninsula : BAJA
Baja California is both the most northern, and the most western of the Mexican states.

Tijuana is the largest city in the Mexican state of Baja California, and lies just across the US-Mexico border from San Diego. Tijuana is also the most westerly of all Mexican cities. A lot of Tijuana’s growth took place in the twenties, as tourists flocked south of the border during the days of prohibition in the US. One of the many casinos and hotels that flourished at that time was Hotel Caesar’s, in the Avenida Revolución area. Hotel Caesar’s claims to be the birthplace of the now ubiquitous Caesar Salad.

44. Peak in “The Odyssey” : OSSA
Mt. Ossa in Greece is located between Mt. Pelion in the south, and the famed Mt. Olympus in the north. Mount Ossa is also known as Kissavos.

is the stage name of Kathryn Dawn Lang, a Canadian singer and songwriter. Beyond her performing career, she is a noted activist focused on animal rights, gay rights, and human rights in Tibet.

59. A, in Arles : UNE
A few years ago I had the privilege of living just a short car ride from the beautiful city of Arles in the South of France. Although it has a long and colorful history, the Romans had a prevailing influence over the city’s design. It has a spectacular Roman amphitheater, arch, circus as well as old walls that surround the center of the city. In more modern times, it was a place Vincent van Gogh often visited, and where he painted his famous “Cafe Terrace at Night

“, as well as “Bedroom in Arles

” is a romantic comedy film from France that was released in 2011. The movie is unusual for a contemporary work in that is a silent film, and was filmed in black and white.

64. *Toothless mammal : ANTEATER
Anteaters tear open ant and termite nests using their sharp claws and then eat up the eggs, larvae and mature ants using their tongues. They have very sticky saliva which coats the tongue hence making the feeding very efficient. The tongue also moves very quickly, flicking in and out of the mouth at 150 times per minute.

66. Zippo filler : BUTANE
The “smaller” alkanes are gases and are quite combustible. Methane (CH4) is the main component of natural gas with ethane (C2H6) being the second largest component. Propane (C3H8) is also found in natural gas and is heavy enough to be readily turned into a liquid, by compression, for ease of transportation and storage. Butane (C4H10) is also easily liquefied under pressure and is used as fuel in cigarette lighters and as a propellant in aerosol sprays. The heavier alkanes are liquids and solids at room temperature.

71. Ref. works sometimes sold with magnifying glasses : OEDS
The “Oxford English Dictionary” (OED) contains over 300,000 “main” entries, and 59 million words in total. It is said it would take a single person 120 years to type it out in full. The longest entry for one word in the second edition of the OED is the verb “set”. When the third edition was published in 2007, the longest entry for a single word became the verb “put”. Perhaps not surprisingly, the most-quoted author in the OED is William Shakespeare, with his most quoted work being “Hamlet”. The most-quoted female author is George Eliot (aka Mary Ann Evans).

Down
4. Van Cleef & ___ (French jeweler) : ARPELS
Van Cleef & Arpels is a jewellery, watch and perfume company that is based in France. As perhaps one might expect, the company was founded by a Charles Arpels and an Alfred Van Cleef, back in 1906 in Paris.

5. Moe, Larry and Curly, ethnically : JEWS
If you’ve seen a few of the films starring “The Three Stooges

” you’ll have noticed that the line up changed over the years. The original trio was made up of Moe and Shemp Howard (two brothers) and Larry Fine (a good friend of the Howards). This line up was usually known as “Moe, Larry and Shemp”. Then Curly Howard replaced his brother when Shemp quit the act, creating the most famous trio, “Moe, Larry And Curly”. Shemp returned when Curly had a debilitating stroke in 1946, and Shemp stayed with the troupe until he died in 1955. Shemp was replaced by Joe Besser, and then “Curly-Joe” DeRita. When Larry had a stroke in 1970, it effectively marked the end of the act.

8. Parthenon goddess : ATHENA
The most recognizable building that stands on the Acropolis in Athens is the Parthenon

, also known as the Temple of Athena.

10. N.Y.C.’s first subway : IRT
The Interborough Rapid Transit Company (IRT) was the original private operator of the New York Subway when it opened in 1904. The city took over ownership of the system in 1940, but the lines originally operated by the IRT are still known by the IRT moniker.

11. Obsolescent printer type : DOT MATRIX
A dot matrix works somewhat like an old typewriter. The printer head runs back and forth across the stage striking the paper through an inked ribbon, creating the printed characters from small dots.

” is a 1955 movie by Billy Wilder, based on a stage play of the same name by George Axelrod. It stars Marilyn Monroe and Tom Ewell (as the guy with “the itch”). Perhaps the most famous scene in the film is the one with Monroe standing over a subway grate allowing the updraft to billow the skirt of her white dress above her knees. It was meant to cool her down, but I think it had the opposite effect on some in the audience! The phrase “seven year itch” had been used by psychologists to describe declining interest in staying monogamous after seven years of marriage.

18. Prey for moray eels : OCTOPI
Morays are a large group of about 200 species of eels found across the world’s oceans. They are carnivorous and look pretty scary but they’re quite shy when confronted and present no threat to humans. One interesting thing about morays is that they will sometimes work in cooperation with the grouper fish found in reefs, the two helping each other hunt for food.

is a breed of small dog, named for the Pomerania region of Europe (part of eastern Germany and northern Poland). The breed was much loved by the royalty of Europe in the 17th and 18th centuries. In the 19th century, Queen Victoria owned a particularly small Pomeranian. Due to the notoriety of the monarch’s pet, the Pomeranian was bred for small size, so that during the Queen’s admittedly long reign, the size of the average “pom” was reduced by 50% …

30. Alert for the squad, for short : APB
An All Points Bulletin (APB) is a broadcast from one US law enforcement agency to another.

came to prominence as a member of the Commodores, becoming a solo artist in 1982.

37. Proof letters : QED
QED is used at the end of a mathematical proof or a philosophical argument. The acronym stands for the Latin “quod erat demonstrandum” meaning “that which was to be demonstrated”.

The Idlewild Golf Course was taken over by the city of New York in 1943, and construction started on a new airport to serve the metropolis and relieve congestion at La Guardia. The Idlewild name still persists, even though the airport was named after Major General Alexander E. Anderson from the first days of the project. When the facility started operating in 1948 it was known as New York International Airport, Anderson Field. It was renamed to John F. Kennedy International Airport in 1963, one month after the President was assassinated.

49. Vote in Parlement : OUI
“Parlement” is the French word for “parliament”.

51. Cold dessert : GELATO
Gelato is the Italian version of American ice cream, differing in that it has a lower butterfat content than its US counterpart.

56. River of Hades : LETHE
The Lethe is one of the five rivers of Hades in Greek mythology. All those who drank from the river Lethe experienced complete forgetfulness. The Greek word “lethe” means “oblivion, forgetfulness”.

, but he also worked with Mortimer Snerd.

58. Others, in Oaxaca : OTROS
Oaxaca is in the southern part of Mexico on the Pacific coast. The state takes the name of Oaxaca, its largest city.

65. Penpoint : NIB
“Nib” is a Scottish variant of the Old English word “neb”, with both meaning the beak of a bird. This usage of “nib” as a beak dates back to the 14th century, with “nib” meaning the tip of a pen or quill coming a little later, in the early 1600s.