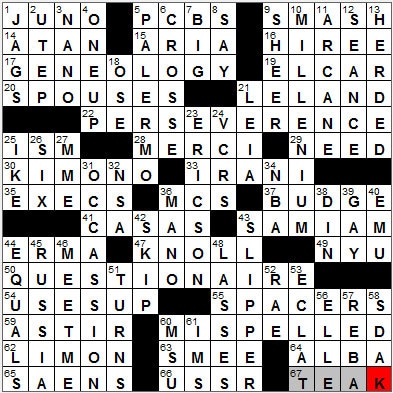 CROSSWORD SETTER: Neville Fogarty
THEME: MISPELLED … the six longest answers in the grid are words that are commonly misspelled, and they’re misspelled here as well:


Today’s Wiki-est, Amazonian Googlies
1. 2007 Ellen Page film : JUNO
“Juno” is a great comedy-drama released in 2007 that tells the story of a spunky teenager who is faced with an unplanned pregnancy. The film won an Oscar for Best Original Screenplay. The relatively low-budget movie earned back its initial budget in the first day of its full release to the public. Low-budget blockbuster; my kind of movie …

15. Da capo ___ : ARIA
An “aria da capo” is an operatic aria that has three sections, with the final section being very similar to the first, a “recap” as it were. This form was very popular during the Baroque era. The composer quite often wrote out the first and second sections in full, and then simply specified “da capo” for the third section (literally “from the head”) indicating that the first section should be played and sung again in full.

19. Dana of “MacGyver” : ELCAR
Dana Elcar was an actor most noted for his recurring role on television’s “MacGyver”. In “MacGyver” he played Peter Thornton, MacGyver’s best friend and boss. Elcar developed glaucoma for the last years of his life, which eventually caused him to go blind. He continued acting even with his affliction. As he lost his sight, Elcar’s condition was written into the “MacGyver” storyline. He also played the blind character Vladimir in his last stage performance, in Samuel Beckett’s “Waiting for Godot”.

21. Henry who founded Cadillac : LELAND
Henry Leland was an automotive industry icon, as well as an inventor. One of Leland’s inventions was the electric barber clippers. At the other end of the scale, Leland created the Cadillac automobile and then founded the Lincoln automotive company, later purchased by Ford..

28. French comment that may elicit the reply “de rien” : MERCI
“Rien” is the French word for “nothing”. “De rien” translates literally from the French as “of nothing”, and is used to mean “you’re welcome” or “don’t mention it”. The Spanish have the same expression “de nada”, also translating to “of nothing” and used the same way.

30. Article with an ushiromigoro : KIMONO
The lovely Japanese kimono is a garment worn by men, women and children. The word “kimono” translates simply as “thing to wear”, with “ki” meaning “wear” and “mono” meaning “thing”.

The “ushiromigoro” is the main panel of fabric in the back of a kimono.

33. Dinar spender : IRANI
A kind blog reader has pointed out that the dinar isn’t the currency used in Iran. Iranis use rials.

The denarius (plural “dinarii”) is a small silver coin that was used in Ancient Rome. Derived from the Latin “deni” meaning “containing ten”, a denarius had the value of ten asses. Today the dinar is a common coin in the Arab world that is named for the old Roman coin. The dinar name was chosen in the days when Arabs were conquering large swathes of the old Roman Empire.

41. They’re on haciendas : CASAS
A “hacienda” is a large estate.

43. Persistent Seuss character : SAM I AM
You know, I probably should read a Dr. Seuss book some day. They weren’t big where I grew up. I understand that the character called Sam in the book “Green Eggs and Ham” is also known as “Sam-I-Am”.

49. Where Spike Lee earned his M.F.A. : NYU
New York University (NYU) is comprised of fifteen schools, one of which it the Tisch School of the Arts. The Tisch is famous for its acting program, with notable alumni such as Debra Messing, Christopher Guest and Josh Radnor.

Shelton Jackson Lee is the real name of Spike Lee, the film director and producer. His first feature-length film, released in 1986, was “She’s Gotta Have It”. Lee shot the film in just twelve days, helping keep the movie within its relatively small budget of only $175,000. It grossed over $7 million …

63. Role in “Hook” : SMEE
In J. M. Barrie’s play and novel about Peter Pan, Smee is one of Captain Hook’s pirates and is Hook’s right-hand man. Smee is described by Barrie as being “Irish” and “a man who stabbed without offence”. Nice guy!

64. Scottish Gaelic name for Scotland : ALBA
Alba is the Scots Gaelic word for Scotland. Alba is the root word that ultimately made its way into the name Albany, the state capital of New York.

65. Composer Camille Saint-___ : SAENS
Camille Saint-Saens was one of the great French composers in my opinion. Even his light and airy “The Carnival of the Animals” is a lovely work.

66. Red letters? : USSR
The former Soviet Union (USSR) was created in 1922, not long after the Russian Revolution of 1917 that overthrew the Tsar. Geographically the new Soviet Union was roughly equivalent to the old Russian Empire, and was comprised of fifteen Soviet Socialist Republics.

67. Furniture wood : TEAK
Teak is a hardwood tree in the mint family, commonly found in monsoon forests of Asia.

Down
1. Pricey cars, informally : JAGS
Jaguar started out as a manufacturer of sidecars for motorcycles back in 1922, when the company was known as the Swallow Sidecar Company (SS for short). The company changed its name to Jaguar after WWII, because of the unfortunate connotations of the letters “SS” at that time.

2. Sch. with the mascot Paydirt Pete : UTEP
The University of Texas at El Paso (UTEP) was founded in 1914, originally as the Texas State School of Mines and Metallurgy. To this day there is a mineshaft on the campus. The mascot of the school’s sports teams is Paydirt Pete, a prospector from the mining industy.

5. City gained by Rome during the First Punic War : PALERMO
Palermo is the capital of the Italian autonomous region of Sicily. Palermo was founded by the Phoenicians over 2700 years ago.

The First Punic War was the first of three wars fought between Ancient Rome and Ancient Carthage. With Carthage on the North African coast and Rome on the east coast of Italy, the Punic wars were largely fought to control the western Mediterranean Sea and centered on the island of Sicily.

6. La ___, Wis. : CROSSE
The city of La Crosse, Wisconsin is located on the Mississippi River, on the eastern border of the state.

21. Speaker of the line “Help me, Obi-Wan Kenobi. You’re my only hope” : LEIA
Princess Leia was played by Carrie Fisher in the original “Star Wars” trilogy. Carrie Fisher has stated that she hated the famous “cinnamon bun hairstyle” that she had to wear in the films, as she felt it made her face look too round. She also had to to sit for two hours every day, just to get her hair styled. Two hours to get your hair done? It takes me just two seconds …

23. Explorer born around A.D. 970 : ERICSON
Leif Eiriksson was a Norse explorer and was the first European to land in North America, some 500 years before Christopher Columbus’s landing in 1492. Eiriksson built a small settlement called Leifsbudir, which archaeologists believe they have found in modern day Newfoundland, at L’Anse aux Meadows. The settlement discovered in Newfoundland is definitely Norse, but there is some dispute over whether it is actually Eiriksson’s Leifsbudir.

25. Five-star W.W. II hero, informally : IKE
There doesn’t seem to be any good reason why President Eisenhower was called “Ike”. However, it is known that the nickname dates back to his childhood as his parents called him “Ike” as well as “Dwight”.

32. Org. associated with U.S. Cyber Command : NSA
The National Security Agency (NSA) was set up in 1952 by President Truman, a replacement for the Armed Forces Security Agency that had existed in the Department of Defense since 1949. The NSA has always been clouded in secrecy and even the 1952 letter from President Truman that established the agency was kept under wraps from the public for over a generation. I really like the organization’s nickname … “No Such Agency”.

US Cyber Command (USCYBERCOM) is located in Fort Meade, Maryland, a home it shares with the National Security Agency. USCYBERCOM has the mission to ensure the US has freedom of action in cyberspace and to deny such freedom to US adversaries.

38. Bedlam let loose : DIN
Bethlem Royal Hospital is a facility in London in the UK for treating mental illness. The original facility was a hospital way back in the 1300s, and had the name “Bedlam”. In the 1700s and 1800s the hospital actually made money out of its patients as it charged a penny to members of the public allowing them to visit the hospital and view the unfortunate inmates in their cells. Tens of thousands of such paid visits were made each year. Our word “bedlam” meaning uproar and confusion is derived from the hospital’s name, and it reflects the cruel and inhumane treatment endured by the inmates in days gone by.

39. John who wrote “The Beggar’s Opera” : GAY
“The Threepenny Opera” (“Die Dreigroschenoper”) is a musical written by Bertolt Brecht and Kurt Weill that was first performed in Berlin in 1928, an adaptation of “The Beggar’s Opera” written by Englishman John Gay in the 18th century. The most famous song from the show is “Mack the Knife”, which was introduced into the popular music repertoire by Louis Armstrong. Armstrong had a hit with the song in 1956, but it was the Bobby Darin recording of 1959 that came to be known as the definitive, English-language version. I love it …

40. Prey for a dingo : EMU
The emu has had a tough time in Australia since man settled there. There was even an “Emu War” in Western Australia in 1932 when migrating emus competed with livestock for water and food. Soldiers were sent in and used machine guns in an unsuccessful attempt to drive off the “invading force”. The emus were clever, breaking their usual formation and adopting guerrilla tactics, operating as smaller units. After 50 days of “war”, the military withdrew. Subsequent requests for military help for the farmers were ignored. The emus had emerged victorious …

The dingo is a wild dog of Australia. The dingo is thought to have originated from domesticated dogs that were brought to Australia with the humans that settled the land centuries ago.

53. Fanfare : ECLAT
Éclat can mean a brilliant show of success, or the applause or accolade that one receives. The word derives from the French “éclater” meaning “to splinter, burst out”.

56. International magazine founded in France in 1945 : ELLE
“Elle” magazine was founded in 1945 in France and today has the highest circulation of any fashion magazine in the world. “Elle” is the French word for “she”.

57. Single-mom sitcom of the 2000s : REBA
Reba McEntire is a country music singer and television actress. McEntire starred in her own sitcom called “Reba” that aired on the WB and the CW cable channels from 2001 to 2007.

58. Its state sport is rodeo: Abbr. : S DAK
The state of South Dakota is bisected north to south by the Missouri River. One half of the state is known as East River and the other West River, and each has a contrasting history and geography. Most of the state’s residents live east of the river, having settled in that part of South Dakota known for its fertile soil. As a result, East river’s economy has historically been associated with agriculture, and the farming of corn and wheat. West River’s economy has been dependent on ranching and mining.

“Rodeo” is a Spanish word, which is usually translated as “round up”.

61. Pre-texting texts, for short : IMS
Those would be Instant Messages (IMs) …