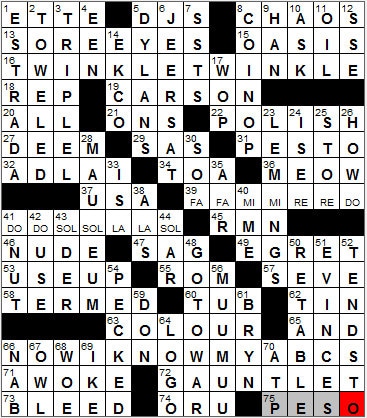 
Today’s Wiki-est, Amazonian Googlies
5. Some CD players : DJS
The world’s first radio disk jockey was one Ray Newby of Stockton, California who made his first broadcast in 1909, would you believe? When he was 16 years old and a student, he started to play his records on a primitive radio located in the Herrold College of Engineering and Wireless in San Jose. The records played back then were mostly recordings of Enrico Caruso.

8. Source of Erebus and Gaia, in Greek myth : CHAOS
In Greek mythology, Chaos was the first of the primeval gods born at the creation of the universe. Following Chaos came:

15. Spring locale : OASIS
The most famous oasis in the US is … Las Vegas, in the middle of the Mojave Desert.

16. Words sung to the beginning of 41-/39-Across : TWINKLE TWINKLE
“Twinkle Twinkle Little Star” is an English nursery rhyme. The words for the rhyme are taken from a poem called “The Star” written by Jane Taylor, by far her most famous work (although she rarely gets the credit). The rhyme is sung to a French folk tune called “Ah! vous dirai-je, Maman”, the same tune used by Mozart for a charming and famous set of variations.

19. Community near Los Angeles : CARSON
Carson, California is a suburb of Los Angeles located south of downtown about 14 miles from LAX airport.

29. Carrier whose main hub is Kastrup airport : SAS
SAS was formerly known as Scandinavian Airlines System and is the flag carrier of three countries: Denmark, Norway and Sweden.

Copenhagen Airport is located in the small town of Kastrup, Denmark. Originally called Kastrup Airport, it opened in 1925 and was one of the first private airports in the world.

31. ___ alla genovese : PESTO
The term “pesto” applies to anything made by pounding. What we tend to know as “pesto” sauce is more properly called “pesto alla genovese”, pesto from Genoa in northern Italy.

32. Two-time opponent of 69-Down : ADLAI
Adlai Stevenson ran for president unsuccessfully against Eisenhower in 1952. Some years later he served under President Kennedy as Ambassador to the United Nations. He was always noted for his eloquence and had a famous exchange in a Security Council meeting during the Cuban missile crisis. He bluntly demanded that the Soviet representative on the council tell the world if the USSR was installing nuclear weapons in Cuba, saying. “Don’t wait for the translation, answer ‘yes’ or ‘no’!” and then followed up with, “I am prepared to wait for my answer until Hell freezes over!”

39. See 41-Across : FA FA MI MI RE RE DO
41. With 39-Across, a familiar tune : DO DO SOL SOL LA LA SOL
The solfa syllables are: do, re, mi, fa, sol, la & ti. The solfa scale was developed from a six-note ascending scale created by Guido of Arezzo in the 11th century. He used the first verse of a Latin hymn to name the syllables of the scale:

45. D.D.E.’s veep : RMN
President Richard Milhous Nixon used “Milhous” in his name in honor of his mother, Hannah Milhous who married Francis Nixon. Richard was born in a house in Yorba Linda, California. You can visit that house today as it is on the grounds of the Richard Nixon Presidential Library. It’s a really interesting way to spend a few hours if you ever get to Yorba Linda …

49. Cousin of a bittern : EGRET
At one time the egret was in danger of extinction as it was hunted for its feathers, which were used as plumes in hats.

Bitterns are wading birds in the heron family. Unlike most of their heron cousins, bitterns tend to have short necks.

57. Ballesteros of golf : SEVE
Seve Ballesteros was a very entertaining golfer from Spain, once ranked as the world’s number one player. Sadly, Ballesteros died from brain cancer in 2011, at the age of 54.

60. Place for a butcher and two others : TUB
The nursery rhyme “Rub-a-Dub-Dub” dates back to at least 1798 when it was first published in London:

66. Words sung to the beginning of 41-/39-Across : NOW I KNOW MY ABCS
“The Alphabet Song” was copyrighted in 1835 in the US. The tune that goes with the words is the French folk song “Ah! vous dirai-je, Maman”, used by Mozart for a set of piano variations. The same tune is used for the nursery rhyme “Twinkle Twinkle Little Star”.

72. Part of a duelist’s uniform : GAUNTLET
Gauntlets are gloves, usually with an extended cuff that extends to cover the forearm. Gauntlets were often made of metal and were used as part of a suit of armor. In days of yore a knight might “throw down the gauntlet”, tossing one of his gauntlets to the ground symbolizing that he has issued a challenge. The prospective opponent would pick up the gauntlet if he accepted that challenge.

74. Tulsa sch. : ORU
Oral Roberts University is a private school in Tulsa, Oklahoma. It was founded relatively recently, in 1963, by the late evangelist Oral Roberts.

75. Capital of Chile : PESO
The land of Chile has a very distinctive shape. It is a narrow strip that runs up the west coast of South America. The average width of the country is only a little over 100 miles, and its length is about 2,700 miles. Chile is touted as the longest country in the world, although I am not so sure what that means exactly. I mean, Russian extends about 4,800 miles from east-to west …

3. Still life feature? : TRIPLE L
There is a run of three letters L in the term “still life”.

5. “Bob ___ Greatest Hits” (1967 top 10 album) : DYLAN’S
As we all know, the real name of singer Bob Dylan is Robert Zimmerman. Zimmerman chose that particular stage name because he was greatly influenced by the poetry of Welshman, Dylan Thomas.

7. Former fliers : SSTS
The most famous Supersonic Transport (SST) was the Concorde, a plane that’s no longer flying. Concorde had that famous “droop nose”. The nose was moved to the horizontal position during flight to create the optimum aerodynamic shape thereby reducing drag. The nose was lowered during taxi, takeoff and landing, so that the pilot had better visibility. The need for the droop nose was driven largely by the delta-shaped wings. The delta wing necessitates a higher angle of attack at takeoff and landing than a conventional wing design, so the pilot needed the nose lowered in order that he or she could see the ground.

9. Solo in space : HAN
Han Solo was the space smuggler in “Star Wars” played by Harrison Ford. Ford was originally hired by George Lucas just to read lines for actors during auditions for “Star Wars”, but over time Lucas became convinced that Ford was right for the pivotal role of Han Solo.

11. Monet medium : OIL
Claude Monet painted the harbor of Le Havre in the north of France in 1872, giving it the title “Impression, Sunrise”. The painting is not a “realistic” representation of the scene in front of him, hence the name “impression”. It was this very painting that gave rise to the name of the Impressionist movement.

17. Doo-___ : WOP
Doo-wop developed in the 1940s and can be described as a vocal-based R&B music. Even though the style has been around since the forties, the name doo-wop wasn’t introduced until the early sixties.

23. Mindless followers : LEMMINGS
Lemmings are small rodents that live in cold climates, usually in or around the Arctic. There is a misconception that lemmings are prone to commit mass suicide. What is true is that like many animal species, lemmings are prone to mass migration, especially when the population in one area gets too great. Lemmings can swim, and will jump into a body of water in order to cross it. However, some lemmings may drown in the attempt. So, the lemmings jump en masse into a body of water to cross it, not to commit suicide. Then there was the famous Disney “White Wilderness” incident. Disney shot footage of lemmings “committing mass suicide” for the 1958 film “White Wilderness”. In fact, the lemmings in the morbid scene were flown to the location of the shoot, and were launched off a cliff using a turntable. Despicable …

24. Rhône feeder : ISERE
The Isère river gives its name to the French Department of Isère, located partly in the French Alps. Isère gave its name to a somewhat famous ship called the Isère, which in 1885 delivered the Statue of Liberty from France to America, in 214 crates.

28. Resting place : MAUSOLEUM
One of the Seven Wonders of the Ancient World was the grave of King Mausolus of Persia, known as the Mausoleum of Halicarnassus. So, King Mausolus gave us our modern word “mausoleum”: a building containing a burial chamber. The most famous mausoleum in the world has to be the Taj Mahal in Agra, India.

33. Puerto Rico, e.g. : ISLA
Puerto Rico is located in the northeastern Caribbean (in the Atlantic Ocean), east of the Dominican Republic. The name “Puerto Rico” is Spanish for “rich port”. The locals often call their island Borinquen, the Spanish form of “Boriken”, the original name used by the natives.

40. Handy sort? : MIME
A mime might use his or her hands to get a message across, absent use of the voice.

50. Push back further : RETABLE
These “tabling” and “shelving” idioms drive me crazy, because they are always misused. If a topic is shelved, it is set aside. If a topic is tabled, it is brought “off the shelf” and put “on the table” for discussion. But, maybe it’s just me …

56. Waikiki wear : MUUMUU
A muumuu is a loose dress that originated in Hawaii. Many muumuus are brightly colored and made of the same material as the ubiquitous Hawaiian shirt. The word “mu’umu’u” means “cut off” in Hawaiian.

61. ___ Mawr : BRYN
I used to live not far from Bryn-mawr (also “Brynmwar”) in Wales, the town with the highest elevation in the country. Appropriately enough, “bryn mawr” is Welsh for “big hill”. There is also a Bryn Mawr in Pennsylvania (note the different capitalization) that is named after its Welsh counterpart. At the Pennsylvania location there’s a Brynn Mawr college, a private women’s school that was the first American university to offer graduate degrees to women.

67. Pooh pal : OWL
Owl is one of the characters in A. A. Milne’s classic children’s tales featuring “Winnie-the-Pooh”. Owl is depicted as the archetypal “wise old owl”, but in the original books he tends not to exhibit very good judgment.

69. Two-time opponent of 32-Across : IKE
There doesn’t seem to be any good reason why President Eisenhower was called “Ike”. However, it is known that the nickname dates back to his childhood as his parents called him “Ike” as well as “Dwight”.

“Open” is the autobiography of tennis professional Andre Agassi, published in 2009. An amazing revelation in the book is that Agassi’s famous head of hair was actually a wig for much of his playing career. Can you imagine how hard it must have been to play tennis at his level with a rug stuck on?