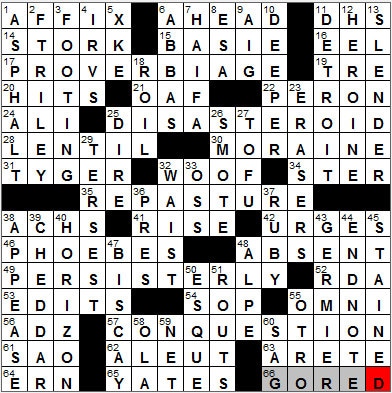 CROSSWORD SETTER: Steven E. Atwood
THEME: AFFIX onto Word Stems … each of the theme answers is combination of two words, with the word stem overlapping. The first part of the clue indicates a prefix with the word stem, and the second the word stem with a suffix. The result is an invented portmanteau word:

11. Players who spend most of their time on the bench, briefly : DHS
Designated hitter (DH).

14. ___ Club, 1930s-’60s New York hot spot : STORK
The Stork Club was a New York City night club that operated from 1929 to 1965. This renowned hangout for A-list celebrities actually featured in a television show called “The Stork Club” that ran for five years in the fifties. The show was directed by Yul Brynner (in the days before he moved in front of the camera) and featured the club’s owner, Sherman Billingsley, interviewing guests as he moved from table to table.

15. Peer of Ellington : BASIE
“Count” Basie’s real given name was “William”. Count Basie perhaps picked up his love for the piano from his mother who played and gave him his first lessons. Basie’s first paying job as a musician was in a movie theater, where he learned to improvise a suitable accompaniment for the silent movies that were being shown.

Duke Ellington was a band leader and composer believed by many to have elevated jazz to the same level as other respected genres of music. Ellington tended not to use the word “jazz” to describe his compositions, preferring the term “American Music”.

22. See 36-Down : PERON
Nowadays, President Juan Perón of Argentina is perhaps less well known than his second wife, Eva Perón of “Evita” fame. Juan and Eva Perón were overthrown in a military coup in 1955, although Juan Perón was returned to power in 1973 when he served for only nine months before he passed away. He was succeeded in office by his third wife, Isabel Perón.

24. ___ Shuffle (boxing move) : ALI
Muhammad Ali had a famous move in the ring that he called the “Ali Shuffle”. It was a little dance move that he used to exhibit some arrogance when he felt that his opponent was about to go down. The move apparently wasn’t his own invention, although he did popularize it. The shuffle was first used by the boxer Jersey Joe Walcott.

25. Threat in “Armageddon”? : DIS(ASTER)OID
As one might expect from the title, “Armageddon” is a disaster movie, released in 1998. It tells the story of attempts to destroy an asteroid that is on a collision course with Earth. The cast includes quite a few big names, led by Bruce Willis. “Armageddon” was a huge success when released, grossing more money even than “Saving Private Ryan” that came out the same year. That, I cannot explain, because I think “Armageddon” is a very average film, and “Saving Private Ryan” is a masterpiece …

30. Pile of glacial debris : MORAINE
Moraines are fields of debris that formed due to the presence or action of glaciers. Long Island in New York State, for example, is formed largely from two glacial moraines.

31. When repeated, words before “burning bright” to start a William Blake poem : TYGER
“The Tyger” is a famous poem by Englishman William Blake, first published in 1794. The word “tyger” is an archaic spelling of our modern word “tiger”. The interesting thing is that, even in Blake’s day, the “tyger” spelling had been superseded by “tiger” and Blake used the contemporary spelling outside of this particular poem. We all learned this one at school:

34. Nap finish? : -STER
In its first and most famous incarnation, Napster was a peer-to-peer file sharing service. Basically, the service allowed people to easily share files over the Internet. What happened was that users opened up mainly their music files for sharing, and as a result there was massive copyright infringement taking place. The music industry sued Napster, and the company went bankrupt in 2002.

46. Fly-catching birds : PHOEBES
The phoebe is a small, insect-eating bird that is native to North and South America.

55. Old Dodge : OMNI
The Dodge Omni was basically the same car as the Plymouth Horizon, and was produced by Chrysler from 1978-90. The Omni is a front-wheel drive hatchback, the first of a long line of front-wheel drive cars that were very successful for Chrysler. The Omni was actually developed in France, by Chrysler’s Simca division. When production was stopped in the US in 1990, the tooling was sold to an Indian company that continued production for the Asian market for several years.

56. Sharp-edged tool : ADZ
An adze (also adz) is similar to an axe, but different in that the blade of an adze is set at right angles to the tool’s shaft. An axe’s blade is set in line with the shaft.

61. Festa de ___ João : SAO
The Festa de Sao João do Porto is a lively street festival held in the city of Porto in Northern Portugal on the 24th of June each year. The event is a tribute to Saint John the Baptist, and is the city’s most important festival.

A parka is a hooded, often fur jacket that is worn in cold weather. The original parka was a pullover design, but nowadays it is usually zipped at the front. “Parka” is the Russian name for the garment , absorbed into English in the late 1700s via the Aleut language.

63. Sharp-crested ridge : ARETE
An arete is ridge of rock defining the border between two parallel valleys that have been formed by glaciation. If this ridge is rounded, it is called a “col”. However, if it is “sharpened”, with rock falling way with successive freezing and thawing, then it is called an “arete”. Arete is the French word for “fish bone”.

65. Peter who directed “The Dresser” : YATES
Peter Yates was an English film director and producer. His first film as a director is very well known by folks back in my part of the world. Released in 1963, the film “Summer Holiday” is a very lightweight vehicle for the singer Cliff Richard. Over in the US Yates is better remembered for directing the likes of “Bullitt” (1968), “Breaking Away” (1979) and “The Deep” (1977).

“The Dresser” is an excellent film directed by Peter Yates, released in 1983. It tells the story of an actor’s personal assistant played by Tom Courtenay, and his aging charge played by Albert Finney.

66. Like an unlucky encierro participant : GORED
“Encierro” is the Spanish term for the “Running of the Bulls”. Such events are held all around the world, but the most famous is in Pamplona in Spain.

Down
1. Urban playground surface : ASPHALT
It turns out that the asphalt surface on roads (or basketball courts) is more properly called asphaltic concrete, because asphalt itself is just a sticky black liquid that comes from crude petroleum. Asphalt is used as a binder with aggregate to form asphaltic concrete.

2. Kansas mil. post built in 1853 : FT RILEY
Fort Riley is an active military installation in Northeast Kansas. The original fort was built in 1853 and was named for a Major General Bennet C. Riley who led the first military escort along the Santa Fe trail. The fort itself was established to protect travellers on the Oregon, California and Santa Fe Trails. Fort Riley became a major post for the US Cavalry and, in 1865, it was home to the renowned George Custer.

4. Sportscaster Cross and others : IRVS
Irv Cross is a former professional footballer and a sportscaster. Cross was hired by CBS Sports in 1971 and became the first African American to work full-time as a sports analyst on network television.

5. Classic Jaguar : XKE
Jaguar started out as a manufacturer of sidecars for motorcycles back in 1922, when the company was known as the Swallow Sidecar Company (SS for short). The company changed its name to Jaguar after WWII, because of the unfortunate connotations of the letters “SS” at that time.

6. Arafat successor : ABBAS
Mahmoud Abbas is very much in the news these days. He took over as Chairman of the Palestine Liberation Organization in 2004 after the death of Yasser Arafat. He is also the President of the Palestinian National Authority, equivalent to the post of “head of state”.

Yasser (also Yasir) Arafat was born in Cairo in 1929, the son of two Palestinians and the second-youngest of seven children. Arafat was beaten by his father as a child and so did not have a good relationship with him. Arafat did not attend his father’s funeral, nor did he visit his grave. The beatings were apparently administered because the young Arafat was repeatedly attending religious services in the Jewish quarter of Cairo. This infuriated his father, while Arafat’s explanation was that he wanted to “study the mentality” of the Jewish people.

9. Insurance giant on the N.Y.S.E. : AIG
AIG is the American International Group, a giant insurance corporation (or I should say, “was”). After repeated bailouts by American taxpayers, the company made some serious PR blunders by spending large amounts of money on executive entertainment and middle management rewards. These included a $444,000 California retreat, an $86,000 hunting trip in England, and a $343,000 getaway to a luxury resort in Phoenix. Poor judgment, I’d say …

11. City named after the French for “strait” : DETROIT
Detroit is the largest city in the state of Michigan. Detroit was founded in 1701 by the French explorer Antoine de la Mothe, sieur de Cadillac. The city takes its name from the Detroit River, which in French is called “le détroit du Lac Érié” meaning “the strait of Lake Erie.

12. Princess Leia, e.g. : HEROINE
Princess Leia was played by Carrie Fisher in the original “Star Wars” trilogy. Carrie Fisher has stated that she hated the famous “cinnamon bun hairstyle” that she had to wear in the films, as she felt it made her face look too round. She also had to to sit for two hours every day, just to get her hair styled. Two hours to get your hair done? It takes me just two seconds …

13. Not Rubens’s type : SLENDER
Peter Paul Rubens was a Flemish painter who worked in the city of Antwerp in Belgium. When Rubens was 53-years-old, four years after the death of his first wife, he married a 16-year-old girl. It was his young wife who inspired many of the voluptuous figures with whom Rubens became associated later in his career.

27. It’s sold in tubs : TOFU
Tofu is another name for bean curd, and is a Japanese word meaning just that … bean that has “curdled”. Tofu is produced by coagulating soy milk, using either salt or something acidic. Once the protein has coagulated, the curds are pressed into the familiar blocks. Personally I love tofu, but my wife, she hates it …

33. Former intelligence agcy. : OSS
The Office of Strategic Services (OSS) was formed during WWII in order to carry out espionage behind enemy lines. A few years after the end of the war the OSS functions were taken up by a new group, the Central Intelligence Agency that was chartered by the National Security Act of 1947.

39. Cheeseburger cheese : CHEDDAR
Cheddar cheese takes its name from the English village of Cheddar in Somerset. Over 50% of the cheese sold in the UK is cheddar. Here in the US cheddar is the second most popular cheese sold, behind Mozzarella.

47. Europe’s Bay of ___ : BISCAY
The Bay of Biscay is that large gulf that sits north of Spain and west of France. The bay is named after the Spanish province of Biscay located in Basque country.

48. L’Eiger, e.g. : ALPE
The Eiger is a mountain in the Bernese Alps in Switzerland. It is a noted peak for mountain climbing, with its treacherous north face being the most famous approach to the summit. Over sixty climbers have died since 1935 on that north face.