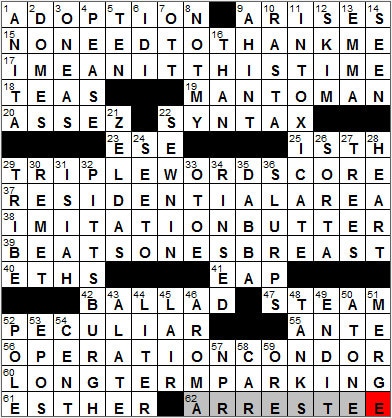 23. Guam-to-Tahiti dir. : ESE
Guam is a US territory in the western Pacific Ocean, the largest of the Mariana Islands. Guam is also the first territory in the United States to see the sun rise on any particular day. As such, the territory has adopted the motto, “Where America’s day begins”. During WWII, the US territory of Guam was occupied by the Japanese for 31 months until it was liberated in the Battle of Guam in July 1944. Of the 18,000 Japanese men holding the island, only 485 surrendered, so almost all perished in the invasion. One Japanese sergeant hid out on the island for an incredible 28 years, finally surrendering in 1972!

Captain Cook landed in Tahiti in 1769, although he wasn’t the first European to do so. But Cook’s visit was the most significant in that it heralded a whole spate of European visitors, who brought with them prostitution, venereal disease and alcohol. Paradoxically, they also brought Christianity. Included among the subsequent visitors was the famous HMS Bounty under the charge of Captain Bligh.

25. Common canal locale: Abbr. : ISTH
The word “isthmus” (plural “isthmi”) comes the Greek word for “neck”. An isthmus is a narrow strip of land that usually connects two large land masses. The most notable examples of the formation are the Isthmus of Corinth in the Greek peninsula, and the Isthmus of Panama, connecting North and South America.

29. Great red spot? : TRIPLE-WORD SCORE
The game of Scrabble has been around since 1938, the invention of an architect named Alfred Moshoer Butts. Butts determined the optimum number of tiles of each letter and the appropriate point value of each tile, by analyzing letter distributions in publications like our beloved “The New York Times” …

Because of the distribution of letters in the set of Scrabble tiles, the only 7-letter word in English that cannot be played is PIZZAZZ. You can get close by using the Z-tile with the two blank tiles to get to three of the required four Zs, but there’s no way to get to the fourth Z.

41. “The Black Cat” writer’s inits. : EAP
Edgar Allan Poe lived a life of many firsts. He is considered to be the inventor of the detective-fiction genre. He was also the first notable American author to make his living through his writing, something that didn’t really go too well for him as he was always financially strapped. In 1849 he was found on the streets of Baltimore, delirious from either drugs or alcohol. He died a few days later in hospital at 39 years of age.

“The Black Cat” is a short story written by Edgar Allen Poe, first published in 1843. It is a dark tale about a man who murders his wife and is taunted by the couple’s black cat.

42. “Yesterday,” e.g. : BALLAD
“Yesterday” is such a beautiful ballad. It was written by Paul McCartney, who also routinely performed the song as a solo piece. “Yesterday” wasn’t originally released as a single, and first appeared as a track on the 1965 Beatles album, “Help!” In several polls over in the UK, “Yesterday” has been named the number one pop song of all time.

Jackie Chan is an actor from Hong Kong, noted for his action and martial arts films. When Chan was 17-years-old he featured as a stunt actor in Bruce Lee movies. He also starred in the 1982 Hong Kong action film “Dragon Lord” which includes a fight scene that required an amazing 2900 takes, a record in the movie industry.

61. Megillah book : ESTHER
Purim is a festival commemorating the deliverance of the Jewish people from a plot to wipe them out by Haman the Agagite, as recorded in the Book of Esther. During the celebration of Purim, the Book of Esther (or Megillah) is read aloud, once in the evening and once the following morning. By the way, Esther is the only book in the Old Testament that doesn’t mention “God”.

3. They’re in the first draft : ONE-A’S
The US government maintains information on all males who are potentially subject to military conscription using what is called the Selective Service System (SSS). In the event that a draft is held, men registered would be classified into groups to determine eligibility for service. Class 1-A registrants are those available for unrestricted military service. Other classes are 1-A-O (conscientious objectors available for noncombatant service), 4-A (registrants who have completed military service) and 4-D (ministers of religion).

6. First name in 1970s tyranny : IDI
Idi Amin received most of his military training in the British armed forces, eventually achieving the highest rank possible for a Black African in the British Colonial Army in 1959, that of Warrant Officer. On his return to Uganda he joined the military and quickly rose to the rank of Deputy Commander of the Army. During that time he was quite the athlete. He was a noted rugby player and swimmer, and for nine years held the Ugandan national light-heavyweight boxing title. By the early seventies Amin was commander of all the armed forces of Uganda, and in 1971 seized power in a military coup, displacing the country’s president Milton Obote. There followed seven years of brutal rule by Amin during which it is estimated that between 100,000 and 500,000 people were murdered. Amin was ousted from power in 1979 after a war with Tanzania, and fled to Libya where he stayed for a year. He then moved to Saudi Arabia, where he was financially supported by the Saudi Royal Family for the remainder of his life. He died in 2003.

The San Francisco Giants have won more games than any other team in baseball, partly because they are one of the oldest teams in the league. The Giants started out as the New York Gothams in 1883 and became the New York Giants in 1885. The team moved to California in 1958.

10. Dreaded believer? : RASTA
I must admit that I don’t really understand Rastafarianism. I do know that a Rasta, like Bob Marley, is a follower of the movement. Some say it is a religion, some not. It does involve the worship of Emperor Haile Selassie I of Ethiopia.

Dreadlocks are matted coils of hair nowadays usually formed intentionally, although if one lets hair grow out without grooming then it naturally forms twisted and matted dreadlocks. The hairstyle is associated with the Rastafarian movement in which the term “dread” is a very positive one, meaning “fear of the Lord”.

13. Actress Watson : EMMA
Emma Watson is the English actress famous for playing Hermione Granger in the “Harry Potter” movies. Watson is continuing her education while pursuing her acting career, and is currently enrolled at Brown University in Providence, Rhode Island.

31. N.B.A. great Thomas : ISIAH
Isiah Thomas played his whole professional basketball-playing career with the Detroit Pistons, and he is now the head coach with Florida International University’s Golden Panthers. When you’re out shopping for popcorn, keep an eye out for the Dale &Thomas brand, as it’s co-owned by Isiah Thomas.

32. Pirates’ hangout : PITTSBURGH
The Pittsburgh Pirates were an early team in the National Baseball League, joining in 1887 just six years after the league was formed. The Pirates played in the first ever World Series, in 1903, and won their first World Series in 1909.

33. Plains people : OTOE
The Otoe were the first Native American tribe encountered in the West by Lewis and Clark. The explorers met with the Otoe (and Missouria) tribes in 1804 at a spot that became known as Council Bluff. The site is now a National Historic Landmark called Fort Atkinson, Nebraska as a fort was built there on Lewis’s recommendation.

43. Winged : ALATE
Something that is “alate” has winglike extensions (as in a leaf perhaps), or is actually winged, like a bird.

46. Starbucks has one : AROMA
Starbucks is a coffee company based in Seattle, Washington. It is the largest coffeehouse company in the world and has over 19,000 stores. In the 1990s, Starbucks was opening one new store every single day! Starbucks is named after the chief mate on the Pequod in the Herman Melville book “Moby Dick”.

52. John Paul II, e.g. : POLE
Pope John Paul II led the Catholic Church from 1978 until 2005, over 26 years. That made him the second longest serving Pope in history, after Pius IX who reigned for over 31 years in the mid 1800s. Paradoxically, John Paul II’s predecessor was John Paul I who only ruled for 33 days. John Paul II was a native of Poland, and was the first non-Italian Pope to lead the church since 1523.

53. “Beowulf” or “Gilgamesh” : EPOS
Epos is the Greek word for a story or a poem. We have absorbed it into English as “epic”, describing a long, narrative poetic work describing heroic deeds and ventures.

The “Epic of Gilgamesh” is an epic poem from Mesopotamia. It is one of the earliest known works of literature that has survived. Fragments of the first version of the epic date back to the 18th century BC.

57. “Tell Me More” broadcaster : NPR
National Public Radio (now just called NPR) was launched in 1970, after President Johnson signed into law the Public Broadcasting Act of 1967. The intent of the act was to provide funding for radio and television broadcasting that wasn’t simply driven by profit. As a longtime fan of the state-funded BBC in the UK, I’d have to agree with that intent …

“Tell Me More” is a daytime talk show on NPR hosted by journalist Michel Martin.