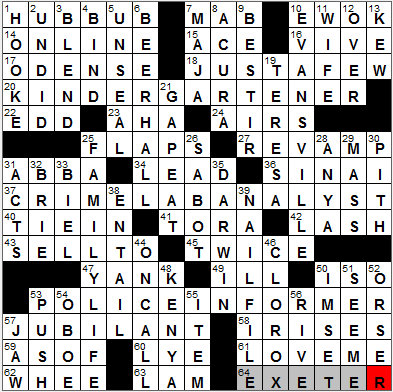 
Today’s Wiki-est, Amazonian Googlies
7. Queen in a speech by Mercutio : MAB
In Shakespeare’s “Romeo and Juliet”, Mercutio refers to the fairy known as Queen Mab. It seems that Queen Mab was Shakespeare’s creation, although she became popular in subsequent works of literature. For example, she is referred to in Herman Melville’s “Moby Dick”, in Jane Austen’s “Sense and Sensibility”, and Percy Bysshe Shelley wrote a large poetic work called “Queen Mab: A Philosophical Poem”.

10. Denizen of the Endor world in “Return of the Jedi” : EWOK
The Ewoks are creatures who live on the moon of Endor, first appearing in “Star Wars Episode VI: Return of the Jedi”. They’re the cute and cuddly guys that look like teddy bears.

14. Two-thirds of AOL : ONLINE
Founded as Quantum Computer Services in 1983 the company changed its name in 1989 to America Online. As America Online went international, the acronym AOL was used in order to shake off the “America-centric” sound to the name. During the heady days of AOL’s success the company could not keep up with the growing number of subscribers, so people trying to connect often encountered busy signals. That’s when users referred to AOL as “Always Off-Line”.

The wonderful storyteller Hans Christian Andersen became very successful in his own lifetime. In 1847 he visited England for the summer and made a triumphal tour of English society’s most fashionable drawing rooms. There he met with the equally successful Charles Dickens, and the two seemed to hit it off. Ten years later Andersen returned to England and stayed for five weeks in Dickens’ home as his guest. Dickens published “David Copperfield” soon after, and supposedly the less than lovable character Uriah Heep was based on Dickens’ house guest, Hans Christian Andersen. That wasn’t very nice!

20. One who engages in finger painting : KINDERGARTENER
Kindergarten is of course a German term, literally meaning “children’s garden”. The term was coined by the German education authority Friedrich Fröbel in 1837, when he used it as the name for his play and activity institute that he created for young children before they headed off to school. His thought was that children should be nourished educationally, like plants in a garden.

22. TV announcer Hall : EDD
Edd Hall is most famous as the former announcer for Jay Leno on “The Tonight Show”.

31. “Take a Chance on Me” group : ABBA
I am an unapologetic fan of ABBA’s music. ABBA was of course the Swedish group who topped the charts in the seventies and eighties. The name ABBA is an acronym formed from the first letters of the given names of each of the band members, namely: Agnetha, Benny, Bjorn and Anni-Frid.

36. Mount ___ Hospital : SINAI
Mount Sinai Hospital in New York is a large teaching hospital, one of the oldest in the country. It was opened in 1852, originally called the Jews’ Hospital in the City of New York with the remit of serving the rapidly growing Jewish immigrant community.

41. When said three times, 1970 film on the Pearl Harbor attack : TORA
The pre-determined code word to be used by the Japanese if they managed to achieve surprise in their attack on Pearl Harbor was “tiger”, or “tora” in Japanese. This gave the name to the excellent 1970 movie “Tora! Tora! Tora!”.

50. Prefix with bar : ISO-
An isobar is a line on a weather map connecting points of equal barometric pressure.

58. Van Gogh painting dominated by green and blue : IRISES
Van Gogh painted his “Irises” while he was in an asylum in the south of France, the year before he committed suicide. The original owner was a French art critic and supporter of Van Gogh who paid 300 francs to purchase the painting. “Irises” was sold for $53.9 million in 1987 making it the most expensive painting sold up to that point. But, the buyer didn’t actually have the necessary funds, so it had to be resold in 1990. It was bought by the J. Paul Getty Museum in Los Angeles, where you can see it today.

60. Soapmaker’s supply : LYE
Soap is basically made by adding a strong alkali (like lye) to a fat (like olive oil). The fats break down in the basic solution in a process called saponification. The crude soap is extracted from the mixture, washed, purified and finished in molds.

“Love Me” is a song recorded in 2009 by the young Canadian performer Justin Bieber.

64. Locale in Devon or New Hampshire : EXETER
Exeter is a historic city in the country of Devon in the southwest of England. The city takes its name from the river on which it lies, the River Exe.

Exeter is a town in New Hampshire, originally incorporated back in 1638. Exeter takes its name from the Exeter River that passes through the town.

Down
1. Pioneering scientist Robert : HOOKE
Robert Hooke was an Englishman, very much an expert in a number of disciplines ranging from science and architecture to philosophy. Hooke spent part of his working life as assistant to the 17th century scientist Robert Boyle.

6. Locale of a 1923 Munich putsch : BEER HALL
The Beer Hall Putsch was an unsuccessful attempt in 1923 by Adolf Hitler and others from the Nazi Party to seize power in Bavaria. The rebellion was inspired by the successful March on Rome that had brought Benito Mussolini and the Fascists to power in Italy the prior year. As a result of the failed coup attempt Hitler was sentenced to five years in jail, during which time he wrote his famous memoir, “Mein Kampf”.

7. Goya subject : MAJA
Francisco Goya was a Spanish painter, often called the last of the Old Masters and the first of the moderns. Two of his most famous works are “The Nude Maja” and “The Clothed Maja”.

10. Indiana city on the Ohio : EVANSVILLE
Evansville, Indiana is the largest city in the southern part of the state. It sits on a bend of the Ohio River, and is sometimes known as “River City”.

19. Nobel winner Mother ___ : TERESA
Mother Teresa was born in 1910 in the city that is now called Skopje, the capital of Macedonia. She was given the names Agnes Gonxha Bojaxhiu (“Gonxha” means “little flower” in Albanian). She left home at the age of 18 and joined the Sisters of Loreto, and headed to Loreto Abbey in Rathfarnham in Dublin, Ireland in order to learn English. Her goal was to teach in India, and English was the language used there for instruction by the nuns. After Mother Teresa passed away in 1997, she was beatified by Pope John Paul II, a step on the road to canonization. In order for her to be beatified there had to be documented evidence of a miracle that was performed due to her intercession. The miracle in question was the healing of a tumor in the abdomen of a woman due to the application of a locket containing a picture of Mother Teresa. Documentation of a second miracle is required for her to be declared a saint.

26. Wooden shoe : SABOT
There is a story that disgruntled textile workers would kick their wooden shoes, called sabots, into the looms in order to disable them so that they didn’t have to work. This act of vandalism was named for the shoe, an act of … sabotage.

29. Part of W.M.D. : MASS
The first recorded use of the term “Weapon of Mass Destruction” (WMD) was in 1937. The words were used by Cosmo Gordon Lang, the Archbishop of Canterbury at the time, in reference to the bombardment of Guernica in Spain during the Spanish Civil War by the German Luftwaffe. He said, “Who can think without horror of what another widespread war would mean, waged as it would be with all the new weapons of mass destruction?”

31. Book after John : ACTS
The Acts of the Apostles is the fifth book of the New Testament.

32. Creamy cheese : BRIE
Brie is a soft cheese, named after the French province of Brie where it originated.

33. Jessica of “The Illusionist” : BIEL
Jessica Biel is an actress, known for acting the part of Mary Camden on television’s “7th Heaven”. Her first film role was playing Peter Fonda’s granddaughter in “Ulee’s Gold”. Biel’s fiance is singer and actor Justin Timberlake.

35. Traveler on the Beagle : DARWIN
Englishman Charles Darwin studied medicine at the University of Edinburgh in Scotland but neglected his studies largely due to his interest in nature and natural history. In the early 1830s, a friend put forward Darwin’s name as a candidate for the post of “collector” on the voyage of HMS Beagle. The Beagle was intending to spend two years at sea primarily charting the coast of South America. The voyage ended up taking five years, during which time Darwin sent back copious letters describing his findings. Back in Britain these letters were published as pamphlets by a friend and so when Darwin eventually returned home in 1836, he had already gained some celebrity in scientific circles. It was while on the Beagle that Darwin developed his initial ideas on the concept of natural selection. It wasn’t until over twenty years later that he formulated his theories into a scientific paper and in 1859 published his famous book “On the Origin of the Species”. This original publication never even mentioned the word “evolution” which was controversial even back then. It was in 1871 that Darwin addressed head-on the concept that man was an animal species, in his book “The Descent of Man, and Selection in Relation to Sex”.

46. Bleach brand : CLOROX
Clorox bleach was first produced by a business called the Electro-Alkaline Company in 1913, just a few miles from where I live here on the east side of San Francisco Bay. I use a generic version of Clorox as the source of chlorine for my swimming pool. It’s the same chemical solution as that sold for pools, just half as concentrated and a lot cheaper!

48. Home of Barack Obama Sr. : KENYA
Barack Obama, Sr. was first married at the age of 18 in his home country of Kenya, and had two children during that marriage. He left his wife and children back in Kenya when he enrolled in the University of Hawaii in 1959, as the school’s first African foreign student. There Obama met Ann Dunham in a Russian language course. The two entered into a romantic relationship and Dunham became pregnant. Obama told Dunham that he was divorced from his first wife (not true), and the pair were married on Maui in 1961. Six months later Barack Obama II was born, destined to be come the 44th President of the United States. Soon after the birth of their child, Ann Dunham moved with their son to Seattle, Washington. The couple were divorced in 1964.

54. Cousin of a bassoon : OBOE
The oboe is perhaps my favorite of the reed instruments. The name “oboe” comes from the French “hautbois” which means “high wood”. When you hear an orchestra tuning before a performance you’ll note (pun intended!) that the oboe starts off the process by playing an “A”. The rest of the musicians in turn tune to that oboe’s “A”. Oh, and if you want to read a fun book (almost an “exposé”) about life playing the oboe, you might try “Mozart in the Jungle” by oboist Blair Tindall. I heard recently that HBO are working towards a pilot based on the book and I can’t wait to see it!

57. Tyrannosaurus rex had a big one : JAW
The Tyrannosaurus rex (usually T. rex) was a spectacular looking dinosaur. Tyrannosaurus comes from the Greek words “tyrannos” (tyrant) and “sauros” (lizard), and the “rex” is of course Latin for “king”. They were big boys, measuring 42 feet long and 13 feet tall at the hips, and weighing 7.5 tons.