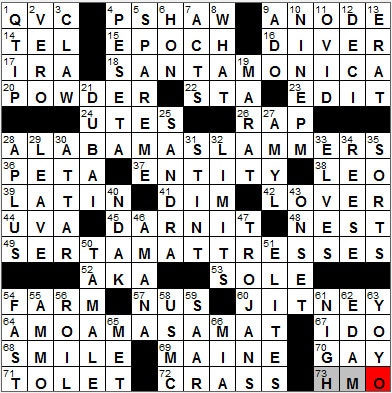 CROSSWORD SETTER: Paula Gamache
THEME: LATIN LOVER … one of the theme answers is AMOS AMAS AMAT, and the other three answers contain those same Latin words hidden between two words:


Today’s Wiki-est, Amazonian Googlies
1. TV shopper’s channel : QVC
The QVC shopping channel was founded in 1986 in West Chester, Pennsylvania. The company now has operations not only in the US but also in the UK, Germany, Japan and Italy. That means QVC is reaching 200 million households. The QVC acronym stands for Quality, Value and Convenience.

9. Cathode’s counterpart : ANODE
The two terminals of a battery are called the anode and the cathode. Electrons travel from the anode to the cathode creating an electric current.

14. Part of AT&T: Abbr. : TEL
The original AT&T Corporation was first known as the American Telephone and Telegraph Company.

18. Neighbor of Venice : SANT(A MO)NICA
The city of Santa Monica, California was named by the Spanish after Saint Monica of Hippo, as the area was first visited by Spanish explorers on her feast day.

24. Western Indians : UTES
The Ute are a group of American Indian tribes that now reside in Utah and Colorado. The Ute were not a unified people as such, but rather a loose association of nomadic groups.

36. Anti-bullfighting org. : PETA
People for the Ethical Treatment of Animals (PETA) is a very large animal rights organization, with 300 employees and two million members and supporters worldwide. Although the group campaigns for animal rights across a broad spectrum of issues, it has a stated focus in opposition of four practices:

44. Charlottesville sch. : UVA
The University of Virginia (UVA) was of course founded by Thomas Jefferson, who sat on the original Board of Visitors with former US Presidents James Madison and James Monroe. In fact, the original UVA campus sat on land that was once a farm belonging to President Monroe.

49. Perfect Sleeper and others : SERT(A MAT)TRESSES
Serta was founded in 1931 when a group of 13 mattress manufacturers came together, essentially forming a cooperative. Today, the company is owned by eight independent licensees in a similar arrangement. Interesting …

57. N N N, to Greeks : NUS
The Latin equivalent of the Greek letter nu is “N”. An uppercase nu looks just like the Latin capital N, however, the lowercase nu looks like our lowercase “v”. Very confusing …

60. Small bus : JITNEY
A jitney is a small bus that carries passengers. The term was first used in the early 1900s when passengers on a jitney bus were usually charge a nickel as the fare. The term “jitney” was slang back then for any small coin.

69. New Brunswick neighbor : MAINE
It seems that no one is certain of the exact etymology of the name of the state of Maine. One theory is that is named for the former French province of Maine.

The Province of New Brunswick takes its name from the city of Braunschweig in Lower Saxony in northern Germany. Braunschweig, known as Brunswick in English, was the ancestral home of the British King George III.

Down
1. Common makeup applicator : Q-TIP
Cotton swabs were originally marketed under the name “Baby Gays”, but this was changed in 1926 to “Q-Tip”, with the Q standing for “quality”.

2. Florida’s ___ Beach : VERO
Vero Beach, Florida was the home of spring training for the Brooklyn/Los Angeles Dodgers from 1948 to 2008 (after which the team moved to Arizona).

4. Old Spanish coin : PESETA
The peseta is the former currency of Spain, replaced by the euro in 2002.

11. Poet banished by the emperor Augustus : OVID
The Roman poet Publius Ovidius Naso is today known simply as Ovid. He is usually listed alongside the two other great Roman poets, Horace and Virgil.

13. Quod ___ demonstrandum : ERAT
QED is used at the end of a mathematical proof or a philosophical argument. The acronym stands for the Latin “quod erat demonstrandum” meaning “that which was to be demonstrated”.

19. The Marquis de Sade delivered his eulogy : MARAT
Jean-Paul Marat was a prominent figure in the French Revolution. He was famously murdered in his bath by a young woman who was a Royalist, an event that was immortalized in a celebrated painting by Jacques-Louis David.

The Marquis de Sade was a French aristocrat with a reputation for a libertine lifestyle. He was also a writer, well known for his works of erotica. He fell foul of the law for some his more extreme practices and for blaspheming the Catholic church. On an off, he spent 32 years of his life in prison and in insane asylums.

27. ___ nitrate : AMYL
Amyl nitrite is intended for use as a vasodilator but it is also psychoactive when inhaled, so it has been abused as a recreational drug.

30. Oil from flower petals : ATTAR
Attar is a fragrant essential oil obtained from flowers, and the term may particularly refer to attar of roses.

34. Pee Wee of baseball : REESE
Pee Wee Reese met Jackie Robinson after he was signed to the Brooklyn Dodgers in 1947. As Reese tells the story, when he greeted Robinson it was the first time he had shaken hands with a black man. Back then life was difficult for Robinson, and Reese made himself very visible as a friend, supporting the breaking down of racial barriers despite very vocal opposition.

40. Fargo’s state: Abbr. : N DAK
Fargo, North Dakota is the biggest city in the state. The original name for the city was Centralia, when it was a stopping point for steamboats that traveled the Red River in the late 19th century. The town really grew with the arrival of the Northern Pacific Railway, so the name “Fargo” was adopted in honor of one of the railroad company’s directors, William Fargo (of Wells Fargo Express fame).

46. Big appliance maker : AMANA
The Amana Corporation takes its name from the location of its original headquarters, in Middle Amana, Iowa.

47. Paris and Hector, e.g. : TROJANS
In Greek legend, Paris was the son of the king of Troy. He eloped with Helen, the Queen of Sparta, and this act was a major trigger for the Trojan War. Also, it was Paris who fatally wounded Achilles by shooting him in the heel with an arrow.

As described in Homer’s “Iliad”, Hector was a Trojan prince and a great fighter. During the war with the Greeks, in order avoid a bloody battle, Hector challenged any one of the Greek warriors to a duel. Ajax was chosen by the Greeks, and the two fought for an entire day before they declared a stalemate.

50. “Hot” dish : TAMALE
Hot Tamales are a cinnamon candy made by Just Born. They look like red versions of the other Just Born candy called Mike and Ike. That’s no coincidence, as Hot Tamales were developed as a way to make use of rejected Mike and Ike candy. The dark red color and intense cinnamon flavor was added to the Mike and Ike rejects, masking the original flavor and color.

58. “The Few, the Proud …” grp. : USMC
“The few, the proud, the Marines” is the modern day recruiting slogan used by the US Marine Corps.

59. Coal-rich region of Germany : SAAR
The Saar is a river that rises on the border between Alsace and Lorraine in France, flows through western Germany and finally entering the Moselle. Historically the Saar river valley was an important source for coal, iron and steel.

62. Cheese coated in red wax : EDAM
Edam cheese takes its name from the Dutch town of Edam in North Holland. The cheese is famous for its coating of red paraffin wax, a layer of protection that helps it travel well and prevents spoiling. You might occasionally come across an Edam cheese that is coated in black wax. This means that the underlying cheese has been aged for a minimum of 17 weeks.

63. Fad item of 1962 : YO-YO
Would you believe that the first yo-yos date back to 500 BC? There is even an ancient Greek vase painting that shows a young man playing with a yo-yo. Centuries later Filipinos were using yo-yos as hunting tools in the 1500s. “Yo-yo” is a Tagalog (Filipino) word meaning “come-come” or simply “return”.

66. Hamm of soccer : MIA
Mia Hamm is a retired American soccer player, a forward who played on the US national team that won the FIFA women’s World Cup in 1991. Mia Hamm is quite the player and has scored 158 international goals, more than other player in the world, male or female.