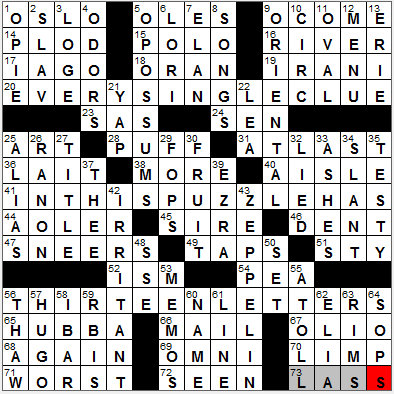 CROSSWORD SETTER: Randall J. Hartman
THEME: THIRTEEN LETTERS … the wording of each and every clue int he puzzle is limited to just thirteen letters, and we are in formed of this fact in three answers in the grid itself:


Today’s Wiki-est, Amazonian Googlies
1. Norwegian city : OSLO
Oslo, the capital of Norway, is an ancient city founded around 1048. The medieval city was destroyed by fire in 1624, and was rebuilt by the Danish-Norwegian king Christian IV and renamed Christiana. In 1877, there was an official change of the spelling to “Kristiana”, and then more recently in 1925 the name was restored to the original Oslo. Things have almost gone full circle for now the center of Oslo, the area that would have been contained by the original medieval walls, has apparently been renamed Christiana.

9. Start of a carol : O COME
The lovely hymn “Adeste Fideles” (aka “O Come, All Ye Faithful”) was written by one John Francis Wade in the 13th century. Well, he wrote the original four verses, with four more verses being added over time.

15. Explorer Marco : POLO
Marco Polo was a merchant from Venice and a famous traveler throughout Asia. He journeyed with his father and uncle on an epic tour of Central Asia and China that lasted 24 years. Marco tends to be the member of the party we remember today though, because it was he who documented their travels in his book “Il Milione”.

16. Mississippi, e.g. : RIVER
The Mississippi River runs right through the Midwest. It originates in Lake Itasca, Minnesota and flows into the Gulf of Mexico about a hundred miles below New Orleans. The name Mississippi is a corruption of a Native American name “misi-ziibi”, meaning “Great River”.

17. “Othello” bad guy : IAGO
Iago is the schemer in Shakespeare’s “Othello”. Iago is a soldier who fought alongside Othello and feels hard done by, missing out on promotion. Iago hatches a plot designed to discredit his rival Cassio, by insinuating that Cassio is having an affair with Desdomona, Othello’s wife. By the end of the play, it’s Iago himself who is discredited, and Othello (before committing suicide) apologizes to Cassio for having believed Iago’s lies. Heavy stuff …

18. Port of Algeria : ORAN
Oran lies on the Algerian coast, and is famous for being the port where the French Navy was largely destroyed by the British during WWII in order to avoid the French vessels falling into the hands of Nazi Germany after France surrendered. This decisive and unexpected action by the British sent a very strong message around the world that Britain was willing to fight alone against the axis powers if necessary.

19. Modern Persian : IRANI
Before 1935, the country we know today as Iran was called Persia by the Western world. The official name of the country since the Iranian Revolution of 1979 is the “Islamic Republic of Iran”.

The acronym KLM stands for “Koninklijke Luchtvaart Maatschappij”, which translates from Dutch as “Royal Aviation Company”. KLM is the flag carrier for the Netherlands, and is the oldest airline in the world still operating with its original name. It was founded in 1919.

24. Pres. Obama, once : SEN
President Obama served three terms in the Illinois State Senate, from 1997 to 2004. He ran unsuccessfully for the US House of Representatives in 2000, and then successfully for the US Senate in 2004. Famously, then-State Senator Obama delivered the keynote address to the Democratic National Convention in 2004, just a few months before winning that US Senate seat.

28. Magical dragon : PUFF
“Puff the Magic Dragon” is a song released in 1963 by Peter, Paul and Mary. It was written by Leonard Lipton and Peter Yarrow (the “Peter” of the singing trio). There has been an urban myth since the song’s release that the lyrics refer to the use of drugs. In fact, the words are based on a poem that Lipton wrote when he was 19-years-old in 1959, inspired by an Ogden Nash poem called “Custard the Dragon”.

44. Buddy List user : AOLER
Founded as Quantum Computer Services in 1983 the company changed its name in 1989 to America Online. As America Online went international, the acronym AOL was used in order to shake off the “America-centric” sound to the name. During the heady days of AOL’s success the company could not keep up with the growing number of subscribers, so people trying to connect often encountered busy signals. That’s when users referred to AOL as “Always Off-Line”.

49. Bugler’s melody : TAPS
“Taps” is played nightly by the US military, indicating “lights out”. It’s also known as “Butterfield’s Lullaby” as it is a variation of an older bugle call named the “Scott Tattoo”, arranged during the Civil War by the Union Army’s Brigadier General Daniel Butterfield. The tune is called “taps”, from the notion of drum taps, as it was originally played on a drum, and only later on a bugle.

52. Surreal ending? : -ISM
The cultural movement known as Surrealism emerged in the 1920s, and grew out of the Dada activities that were a response to WWI. The first person to coin the word “surrealist” was Guillaume Apollinaire, when he used it in the preface of his play “Les Mamelles de Tirésias”.

65. Half a wolf’s cry : HUBBA
The slang interjection “hubba-hubba” has been around since WWII.

67. Odd collection : OLIO
Olio is a term meaning a hodgepodge or a mixture, coming from the mixed stew of the same name. The stew in turn takes its name from the Spanish “olla”, the name of the clay pot used when cooking the stew.

69. Old Dodge model : OMNI
The Dodge Omni was basically the same car as the Plymouth Horizon, and was produced by Chrysler from 1978-90. The Omni is a front-wheel drive hatchback, the first of a long line of front-wheel drive cars that was very successful for Chrysler. The Omni was actually developed in France, by Chrysler’s Simca division. When production was stopped in the US in 1990, the tooling was sold to an Indian company that continued production for the Asian market for several years.

73. Glasgow lovely : LASS
Glasgow is the largest city in Scotland and sits on the River Clyde. Back in the Victorian Era Glasgow earned a reputation for excellence in shipbuilding and was known as “Second City of the British Empire”. Glasgow shipyard’s were the birthplaces of such famous vessels as the Lusitania, the Queen Mary and the Queen Elizabeth.

Down
1. Boy of Mayberry : OPIE
Ron Howard sure has come a long way since playing Opie on “The Andy Griffith Show”. He has directed some fabulous movies, including favorites of mine like “Apollo 13”, “A Beautiful Mind” and “The Da Vinci Code”. And today, Opie is a grandfather …

2. Serbian or Pole : SLAV
The Slavic peoples are found in the majority in communities that cover over half of Europe. This large ethnic group is traditionally broken down into three smaller groups:

4. Secret targets? : ODORS
Secret is an antiperspirant/deodorant made by Proctor & Gamble, first introduced in 1956 as a cream that was applied with the fingers (ick!). There followed a roll-on version in 1958, a spray in 1964 and the solid stick in 1978.

5. Pogo and others : OPOSSUMS
“Pogo” is a comic strip that was launched in 1948, the creation of cartoonist Walt Kelly. The story centers on animals that live in the Okefenokee Swamp that lies on the Georgia-Florida border, with the title character “Pogo Possum” being an anthropomorphic opossum.

6. Actress Singer : LORI
Lori Singer is an actress, and also a cellist. Her most famous acting role was the daughter of the Reverend Shaw Moore (played by John Lithgow) in “Footloose”.

7. Personal flair : ELAN
Our word “élan” was imported from French, in which language the word has a similar meaning to ours i.e “style” or “flair”.

11. Nascar circuit : OVAL
NASCAR stands for the National Association for Stock Car Auto Racing. NASCAR is very, very popular and commands the second largest television audience of any professional sport in America, second only to football.

13. Sandusky’s lake : ERIE
Sandusky, Ohio is a city on the shores of Lake Erie. My son is always talking about Sandusky as a place he’d like to visit, as it is home to one the largest collections of roller coasters in the world.

29. Beau Brummells : FOPS
Beau Brummell was a friend of the future King George IV of England, and established himself as the arbiter of men’s fashions at the time. He claimed that it took him five hours to get dressed properly, and that he had his boots polished with champagne. It was Brummell that popularized the fashion of wearing a fitted jacket and pants with a knotted cravat. So, we have Brummell to thank/blame for us guys having to wear business suits with ties.

39. Pound of poetry : EZRA
Ezra Pound was an American poet who spent much of his life wandering the world, spending years in each of London, Paris, and Italy. In Italy, his work and sympathies for Mussolini’s regime led to his arrest at the end of the war. His major work was the epic, albeit incomplete “The Cantos”. The poem is divided into 120 sections, each known as a canto.

43. Former airship : ZEPPELIN
The Zeppelin airship was developed by the German Count Ferdinand von Zeppelin, the design of which was granted a US patent 1899. When Zeppelins went into service, they were operated by the company Deutsche Luftschiffahrts-AG (DELAG), making the company the world’s first commercial airline, operating flights even before WWI. Famously, that big spire at the top of the Empire State Building was designed to be a docking point for Zeppelin airships, but after several attempts to use it as such the idea was abandoned, as the updrafts coming up from the streets below made docking too hazardous a maneuver.

57. Boss of fashion : HUGO
Hugo Boss started a clothing company in a small town just south of Stuttgart in Germany in 1924. He joined the Nazi party before the war, and made a lot of money as an official supplier of uniforms to the likes of the SS and Hitler Youth. He paid the price of collaboration after the war (a fine), but his business survived. Boss the boss died in 1948, but the Hugo Boss company is still going strong today.

60. Facebook entry : NAME
Everything I know about Facebook I learned from the very entertaining movie “The Social Network”, from 2010. I have a Facebook page for this blog, but I really have no idea how to use it!

62. Director Kazan : ELIA
Elia Kazan won Oscars for best director in 1948 for “Gentleman’s Agreement” and in 1955 for “On The Waterfront”. In 1999 he was given an Academy Lifetime Achievement Award. He also directed “East of Eden”, which introduced James Dean to movie audiences, and “Splendor in the Grass”, which included Warren Beatty in his debut role.