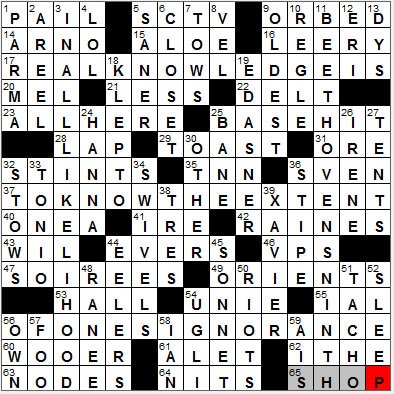 17A. Start of a Confucian aphorism : REAL KNOWLEDGE IS
37A. Aphorism’s middle : TO KNOW THE EXTENT
56A. Aphorism’s end : OF ONE’S IGNORANCE

5. Candy used to be seen on it : SCTV
John Candy was a Canadian comedian and actor. He was an alum of Canada’s famed comedy troupe called the Second City. In the world of movies I have to say my favorite of his performances were in supporting roles, as in “Stripes” and “Home Alone”. Sadly, Candy died of a heart attack in 1994, when he was only 43 years old.

15. Ingredient in traditional medicine : ALOE
Aloe vera has a number of alternate names that are descriptive of its efficacy as a medicine. These include the First Aid plant, Wand of Heaven, Silent Healer and Miracle Plant.

22. Arm raiser, informally : DELT
The deltoid muscle is actually a group of muscles, the ones that cover the shoulder and create the roundness under the skin. The deltoid is triangular in shape resembling the Greek letter delta, hence the name.

23. Like the gang, in an old song : ALL HERE
“Hail, Hail, the Gang’s All Here” is a song written in 1917, although the tune comes from Gilbert & Sullivan’s “The Pirates of Penzance”.

35. TV network that broadcast live from Opryland USA : TNN
The Nashville Network (TNN) was a country music cable channel that operated from 1983 to 2003. When TNN closed down it was relaunched with a completely different format as Spike, marketed as “the first television channel for men”.

36. Two-time Oscar-winning cinematographer Nykvist : SVEN
Swedish cinematographer Sven Nykvist won two Academy Awards and is best known for his work with Ingmar Bergman. In fact, his Oscars came for his contribution to two Bergman films, “Cries and Whispers” and “Fanny and Alexander”.

40. Draftable : ONE-A
The US government maintains information on all males who are potentially subject to military conscription using what is called the Selective Service System (SSS). In the event that a draft is held, men registered would be classified into groups to determine eligibility for service. Class 1-A registrants are those available for unrestricted military service. Other classes are 1-A-O (conscientious objectors available for noncombatant service), 4-A (registrants who have completed military service) and 4-D (ministers of religion).

43. Actor Wheaton : WIL
Wil Wheaton is the actor who grew up playing Ensign Crusher on the best of the “Star Trek” TV series, “Star Trek: The Next Generation”. In recent years Wheaton has become a de facto spokesman for the so-called “geek” or “nerd” community via a weblog that he writes called “Wil Wheaton Dot Net”. He has been playing Dungeons & Dragons for years, and is also someone you’ll see at celebrity poker games on TV.

44. Medgar ___ College : EVERS
Medgar Evers was an African American civil rights activist from Mississippi, assassinated by the Klu Klux Klan in 1963. A year after the murder, one Byron De La Beckwith was arrested and charged with the crime. Two trials failed to return a decision on Beckwith’s guilt as the juries, composed completely of white males, deadlocked both times. New evidence was unearthed some thirty years later so Beckwith could be retried and he was finally convicted of the murder in 1994. Back in 1963 Evers was buried with full military honors in Arlington National Cemetery. Evers had served in the US Army in France during WWII and left the military with the rank of sergeant.

47. Some galas : SOIREES
“Soir” is the French word for “evening” and a “soirée” is an “evening party”. The French word “soirée” has an acute accent over the first “e”, but we tend to drop this when using the word in English.

As well as being a town on southern coast of France, Toulon is a military port and home to the French Mediterranean Fleet. In particular it is the home port of the French Navy’s sole aircraft carrier, the Charles de Gaulle.

65. Word with china or chop : SHOP
After a car is stolen it might be delivered to a “chop shop”, a workshop that can break it up so that it can be sold for parts.

Down
1. Cheese city : PARMA
Parma is a city in northern Italy and is famous for its ham and cheese.

9. Guinness superlative : OLDEST
“The Guinness Book of World Records” holds some records of its own. It is the best-selling, copyrighted series of books of all time and is one of the books most often stolen from public libraries! The book was first published in 1954 by two twins, Norris and Ross McWhirter. The McWhirter twins found themselves with a smash hit, and eventually became very famous in Britain on a TV show based on world records.

10. “La ___ du jeu” (1939 Renoir film) : REGLE
“The Rules of the Game” (“La Règle du jeu”) is a 1939 film by the celebrated French director Jean Renoir. Since its release, the film has been consistently ranked as one of the greatest films in history.

Jean Renoir was a very successful French movie director. He was also the son of the famous impressionist painter, Pierre-Auguste Renoir.

11. Music featured in “A Clockwork Orange” : BEETHOVEN’S NINTH
Beethoven’s Ninth Symphony is of course his wonderful “Choral” symphony. When it was composed in 1824 it was the first time that a major composer had used voices in a symphony. By the time of the Ninth’s premier, Beethoven was essentially deaf. He insisted on sharing the stage with the musical director (who was conducting), and was visibly counting out time but was off by quite a few measures. When the last notes were played there was enthusiastic applause, although Beethoven was still conducting. The lead contralto has to walk over to Beethoven, stop him, and turn him to the audience to receive his adulation.

“A Clockwork Orange” is a novella by Anthony Burgess, first published in 1962. The story is about a young teenager, Alex, who leads a small gang on violent rampages each night. The story has been adapted for the big and small screens, most famously in a 1971 film by Stanley Kubrick. It’s way too violent for me …

12. “___ tu” : ERI
The aria “Eri tu” is from Verdi’s opera “Un ballo in maschera” (A Masked Ball). The opera tells the story of the assassination of King Gustav III of Sweden during a masked ball.

18. One who’s working out of pocket, informally? : KLEPTO
Kleptomania is the compulsion to steal, whether or not one is need of what is stolen. The term derives from the Greek word for “to steal”, “kleptein”, with the suffix “-mania”.

19. “Elf” co-star, 2003 : ED ASNER
Ed Asner is most famous for playing the irascible but lovable Lou Grant on “The Mary Tyler Moore Show” and on the spin-off drama “Lou Grant”. Off-screen Asner is noted for his political activism. He served two terms as president of the Screen Actors Guild (SAG), and was very involved in the 1980 SAG strike. When “Lou Grant” was cancelled in 1982, despite decent ratings, there was a lot of talk that the cancellation was a move by the network against Asner personally. In fact one of Asner’s activist colleagues, Howard Hesseman (who played Johnny Fever), found that his show “WKRP in Cincinnati” was also cancelled … on the very same day …

“Elf” is a Christmas comedy film released in 2003 starring Will Farrell.

26. Memorable 2011 hurricane : IRENE
Hurricane Irene caused extensive flooding as it travelled through the Caribbean, up the East Coast of the United States and into the Atlantic seaboard of Canada. The hurricane was unusual in that it came so far north up the North American coast. 55 deaths were attributed to Irene.

27. Sights at Occupy protests : TENTS
The Occupy movement is a protest directed against economic and social inequality worldwide. The first such protest to garner major attention took place in Wall Street in 2011 and from there similar protests spread around the world.

33. “Pagliacci” clown : TONIO
“Pagliacci” is an opera by Ruggero Leoncavallo, first performed in 1892 in Milan. Included in the opera is one of the most famous arias of all time, “Vesti la giubba” (“put on the costume”).

36. Mushroom stem : STIPE
A mushroom isn’t a complete living organism per se but rather is one part of a fungus, the fruiting body that is responsible for distributing reproductive spores. The mushroom generally has three main components: the stipe (or stem), the pileus (or cap) and the lamellae (or gills) under the cap which distribute the spores.

39. Chicago’s Saint ___ University : XAVIER
Saint Xavier University is a school located on the southwest side of Chicago. The university was founded back in 1846 by the Sisters of Mercy as Saint Francis Xavier Female Academy, but the school is now coeducational. The original campus burnt down in the Great Chicago Fire of 1871 and had to be rebuilt at a new site.

44. Fishermen with traps : EELERS
An eeler is someone who fishes for eels. Eeling is also known as “sniggling”.

45. Browning piece : SONNET
A sonnet is a short poem with varying rhyming schemes but always with 14 lines. The sonnet form has been around at least since the 13th century.

48. Hindu princess : RANEE
A ranee (also spelled rani) is the female equivalent of a raja in India.

51. Prefix with -meter : TACHO-
The tachometer takes its name from the Greek word “tachos” meaning “speed”. A tachometer measures revolutions per minute (rpm).

54. ___ fruit : UGLI
The ugli fruit is a hybrid of an orange and a tangerine and was first discovered growing wild in Jamaica where most ugli fruit comes from today.

58. N.H.L.’s Laperriere : IAN
Ian Laperrière is a hockey player with the Philadelphia Flyers. Laperrière hasn’t played since 2010 as he is suffering from post-concussion syndrome after being hit in the face twice by pucks in the 2009-2010 season.