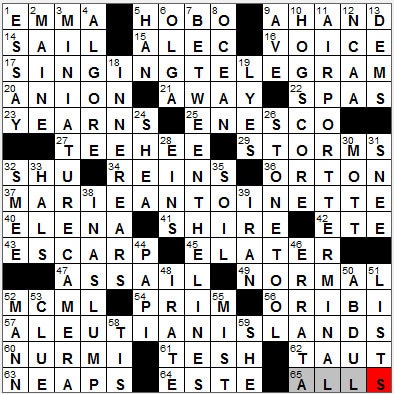 
Today’s Wiki-est, Amazonian Googlies
1. Title matchmaker of early 19th-century literature : EMMA
“Emma” is just a wonderful novel by Jane Austen, first published in 1815. I had the privilege a few years ago of attending the premiere of “Emma”, a delightful musical adaptation for the stage. If you ever get the chance to see it, I highly recommend it …

5. Drifting type : HOBO
No one seems to know for sure how the term “hobo” originated, although there are lots of colorful theories. My favorite is that “hobo” comes from the first letters in the words “ho-meward bo-und”, but it doesn’t seem very plausible. A kind blog reader tells me that according to Click and Clack from PBS’s “Car Talk” (a great source!) “hobo” comes from “hoe boy”. Hoe boys were young men with hoes looking for work after the Civil War. Hobos differed from “tramps” and “bums”, in that “bums” refused to work, “tramps” worked when they had to, while “hobos” traveled in search of work.

22. Spots for rubs and scrubs : SPAS
The word “spa” migrated into English from Belgium, as Spa is the name of a municipality in the east of the country that is famous for its healing hot springs. The name “spa” comes from the Walloon word “espa” meaning “spring, fountain”.

32. Moo ___ : SHU
Moo shu pork is a traditional dish from northern China, with the main ingredients being shredded pork and scrambled egg.

37. Revolutionary Tribunal casualty : MARIE ANTOINETTE
Marie Antoinette was the wife of Louis XVI, the last king of France. She was the fifteenth of sixteen children born to the Empress Maria Theresa of Austria. The marriage to Louis, Marie Antoinette’s second cousin once removed, was arranged while the two were very young. The prospective bride was “handed over” to the French at a border crossing in 1770 and two weeks later she was married to the future king. Marie Antoinette was just 14 years of age, and Louis only a year her senior.

The Revolutionary Tribunal was a court that tried political offenders during the French Revolution. At one point the tribunal was condemning to death almost 30 people per day.

41. Oxford attachment? : -SHIRE
Oxfordshire is a country in the southeast of England. As one might expect, the main city in the county is Oxford. If you are visiting Oxfordshire, don’t forget to go see the magnificent Blenheim Palace in Woodstock. Among other things, Blenheim was the birthplace and ancestral home of Sir Winston Churchill.

43. Fort’s steep slope : ESCARP
An escarp or escarpment is a steep slope or cliff. The term is also used for the inner wall of a ditch that is dug around a fortification.

45. Click beetle : ELATER
The click beetle belongs to the family Elateridae, and is also called an elater. The click beetle is so called because it can snap a spine on its back into a notch created a “click” which launches the beetle into the air. This click serves as a means of escape from predators, and also allows the beetle to right itself should it end up on its back.

52. Korean War outbreak year : MCML
The Korean War took place from 1950 to 1953 and was fought between the Republic of Korea (the South) and the Democratic People’s Republic of Korea (the North). The war came about because, at the end of WWII, Korea was divided by the allies along the 38th Parallel, with the Soviet Union controlling territory north of the line, and the US occupying the south. North Korean troops invaded the south in 1950, which started the armed conflict. An armistice was signed in 1953 which restored the border, but there are outbreaks of fighting to this very day, as we all well know.

Vitus Bering was a Danish navigator who worked for the Russian Navy. He was the first European to discover Alaska, which he did in 1741. Bering died on the same voyage of discovery and was buried on the largest of the Commander Islands, now called Bering Island in his honor.

60. Paavo ___, track’s Flying Finn : NURMI
Paavo Nurmi was one of a group of Finnish runners to earn the nickname “the Flying Finn”. Nurmi dominated middle and long distance running in the 1920s. He was the most successful athlete at the 1924 Paris Olympics, winning five gold medals.

61. “Live at Red Rocks” pianist : TESH
John Tesh is a pianist and composer, as well as a radio and television presenter.

Red Rocks Amphitheatre is an open-air venue for the performing arts near Morrison, Colorado.

64. City in Padua province : ESTE
Este is a town in the Province of Padua in the north of Italy. The town gave its name to the House of Este, a European princely dynasty.

65. Shakespeare title contraction : ALL’S
“All’s Well That Ends Well” is a play by William Shakespeare, one with elements of both tragedy and comedy.

Down
1. Steele work : ESSAY
Richard Steele was an Irish writer, the co-founder of the magazine “The Spectator”. Steele also founded “The Tatler” magazine, for which he wrote 188 essays.

2. Where “ayuh” is an affirmative : MAINE
“Ayuh” is a word that’s commonly used in Maine to mean “yes”.

3. What 007 might shoot with : MINIATURE CAMERA
James Bond was of course the creation of the writer Ian Fleming. Fleming “stole” the James Bond name from an American ornithologist. The number 007 was “stolen” from the real life English spy John Dee. Dee would sign his reports to Queen Elizabeth I with a stylized 007 to indicate that the reports were for “her eyes only”.

4. He declared “The planet has a fever” : AL GORE
Al Gore was born in Washington DC, the son of Al Gore, Sr., then a US Representative for the state of Tennessee. After deferring his military service in order to attend Harvard, Gore became eligible for the draft on graduation. Many of his classmates found ways of avoiding the draft, but he decided to serve and even took the “tougher” option of joining the army as an enlisted man. Actor Tommy Lee Jones shared a house with Gore in college and says that his buddy told him that even if he could find a way around the draft, someone with less options than him would have to go in his place and that was just wrong.

6. Pasternak mistress Ivinskaya : OLGA
Olga Ivinskaya was the mistress of the writer Boris Pasternak. As such, she was the inspiration for the famous Lara character in Pasternak’s epic novel “Dr. Zhivago”.

9. GPS screen abbr. : AVE
GPS stands for Global Positioning System. The modern GPS system that we use today was built by the US military who received the massive funding needed because of fears during the Cold War of the use of Intercontinental Ballistic Missiles. We civilians, all round the world, owe a lot to President Ronald Reagan because he directed the military to make GPS technology available to the public for the common good. He was moved to do so after the Soviet Union shot down KAL flight 007 carrying 269 people, just because it accidentally strayed into Soviet airspace.

10. Curling rink line seven yards from the tee : HOG SCORE
In the sport of curling, the stones that are launched towards the target must come to rest between the back line (behind the target) and the hog line (11 m in front of the backboard).

12. Scholarship-offering org. : NCAA
The National Collegiate Athletic Association (NCAA) dates back to the Presidency of Theodore Roosevelt. When President Roosevelt’s son broke his nose playing football at Harvard, Roosevelt turned his attention to the number of serious injuries and even deaths occurring in college sports. He instigated meetings between the major educational institutions, leading in 1906 to the formation of the Intercollegiate Athletic Association of the United States (IAAUS) that was given the remit of regulating college sports. The IAAUS became the NCAA in 1910.

18. Semicircular canals’ locales : INNER EARS
The three semicircular canals in the inner ear are in three different orientations, allowing the brain to sense movements of the head in all directions.

19. Burning solutions : LYES
Today, when we purchase what is labelled as “lye”, it is caustic soda (sodium hydroxide). To clean out drains we might buy Crystal Drano which is sodium hydroxide (lye) mixed with sodium nitrate, sodium chloride (table salt) and aluminum. The contents of Drano work in concert to clear the clog. The lye reacts with any fats creating soap which may be enough to break up the clog. Also, the finely divided aluminum reacts with water creating tremendous heat so that that mixture boils and churns, then any hair or fibers are cut by the sharp edges of the nitrate and chloride crystals. Having said all that, I find that boiling water poured down the drain almost always does the job …

24. 2008 demolition target : SHEA
Shea Stadium in Flushing Meadows, New York was named after William A. Shea, the man credited with bringing National League baseball back to the city, in the form of the New York Mets. Shea Stadium was dismantled (not imploded) in 2008-2009, and the site now provides additional parking for the new stadium that’s nearby, called Citi Field.

26. Eolith or neolith : STONE TOOL
Eoliths are chipped flint nodules. They were once thought to be the first stone tools, but the general opinion today is that eoliths are produced by natural processes such as glaciation.

A neolith is a stone tool that was produced during the Neolithic Era, the last part of the Stone Age.

30. Glam rock’s ___ the Hoople : MOTT
Mott the Hoople was a glam rock band from England that was big in the mid-seventies. The name of the band come from the title of a novel by Willard Manus.

I remember the days of glam rock so well, as it was a hugely popular genre of music in the British Isles during the early seventies. Artistes wore the wildest of clothes, big hair, shiny outfits and really high platform boots. Names associated with glam rock are T. Rex, David Bowie, Roxy Music and Gary Glitter.

31. Old dagger : SNEE
“Snick or snee” is the name given to cut and thrust while fighting with a knife. The phrase is rooted in a pair of Dutch words, and it gave its name to a “snee”, a light sword-like knife.

32. Hook helper : SMEE
In J. M. Barrie’s play and novel about Peter Pan, Smee is one of Captain Hook’s pirates and is Hook’s right-hand man. He is described by Barrie as being “Irish” and “a man who stabbed without offence”. Nice guy!

33. Dutch Golden Age painter : HALS
Frans Hals was a painter from the Dutch Golden Age, born in Antwerp but who lived and worked in Haarlem. Hals is best known for his portraits, the most famous of which is probably “The Laughing Cavalier”.

44. Spanish term of endearment : PAPI
“Papi” is Spanish for “Daddy”.

46. Printed slips : ERRATA
Errata is the past participle of the Latin word “errare” meaning “to err”. We use “errata” to mean a list of errors that have been noted in some publication.

50. “The X Factor” panelist : ABDUL
Paula Abdul is primarily a singer and dancer, and someone who endeared herself even more to the American public in recent years as a judge on “American Idol”. She had a famous husband for a couple of years, as she was married to actor Emilio Estevez from 1992-94.

52. “Doctor Faustus” novelist : MANN
Thomas Mann was a German novelist whose most famous work is probably his novella “Death in Venice”, originally published in German in 1912 as “Der Tod in Venedig”. The story was famously adapted for the big screen in 1971, in a movie starring Dirk Bogarde.

“Doctor Faustus” is a novel by Thomas Mann first published in 1947. It is a retelling of the legend of Faust but set in Germany in the first half of the 20th century.