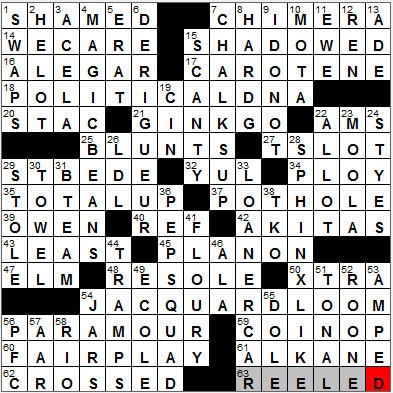 
Today’s Wiki-est, Amazonian Googlies
7. Impossible dream : CHIMERA
In Greek mythology, a chimera was a female monster with the body of a lioness, a tail that ended in a snake’s head, and the head of a goat that emanated from the lioness’s spine. The term chimera has entered into our modern language, meaning a fanciful illusion or fabrication.

14. Clichéd company claim : WE CARE
“Cliché” is a word that comes from the world of printing. In the days when type was added as individual letters into a printing plate, for efficiency some oft-used phrases and words were created as one single slug of metal. The word “cliché” was used for such a grouping of letters. It’s easy to see how the same word would become a term to describe any overused phrase. Supposedly, “cliché” comes from French, from the verb “clicher” meaning “to click”. The idea is that when a matrix of letters was dropped in molten metal to make a cliché, it made a clicking sound.

16. Onetime pickling liquid : ALEGAR
Alegar is vinegar that is produced by the fermentation of ale.

17. Pumpkin is rich in it : CAROTENE
Carotene is an orange pigment that plants use in the process of photosynthesis. Carotene gives carrots their orange color, and it is carrots that give the pigment its name. “Carota” is the Latin for “carrot”.

20. Abbr. accompanying some dotted notes : STAC
Staccato is a musical direction signifying that notes should be played in a disconnected form. The opposite of staccato would be legato, long and continuous notes played very smoothly.

21. Urban planting favorite : GINKGO
The Ginkgo tree is quite remarkable in that it is regarded as a living fossil. This means that it has not evolved as a living organism and, based on fossil evidence, is the same species today as it was million of years ago. It is a remarkably successful species, having survived many extinction events that wiped out so much of life on the planet.

29. Only Englishman named a Dr. of the Church : ST BEDE
The Venerable Bede was a monk in the north of England in the first century AD. His is mainly known as an author and scholar, publisher of “The Ecclesiastical History of the English People”.

32. Tony’s “Taras Bulba” co-star, 1962 : YUL
Yul Brynner was a Russian-born actor. Brynner was well known for his great performances, but also for his shaved head and his deep rich voice. He first encountered the “hairstyle” while playing the King of Siam in the stage version of “The King and I”, and he stuck with it.

“Taras Bulba” is a film released in 1962 that is based on the short novel of the same name by Nikolai Gogol. The leading roles are played by Yul Brynner and Tony Curtis.

42. Good dogs for pulling loads : AKITAS
The Akita breed of dog is named for its point of origin, the Akita Prefecture in Japan. When Helen Keller visited Japan in 1937, she asked for and was given an Akita breed of dog, with the name of Kamikaze-go. Sadly, the dog died within a year from distemper. The following year the Japanese government officially presented Keller with a replacement dog. Supposedly Keller’s dogs were the first members of the breed to be introduced into the US.

54. Maker of fabrics with intricate designs : JACQUARD LOOM
The Jacquard loom was developed in 1801 by Joseph Marie Jacquard. The loom is controlled by punched cards which simplify the process of making complex patterns like brocade and damask.

56. Tryst figure : PARAMOUR
A paramour is a lover, particularly one in an adulterous relationship. As one might expect, “paramour” comes from the French, an adverb “par amour” meaning “with strong love”. Given the current usage of the term, it’s paradoxical that the word first came into English in the 1300s as a term women used for Christ, and men used for the Virgin Mary.

In its most general sense, a tryst is a meeting at an agreed time and place. More usually it is associated with a prearranged meeting between lovers. The term comes from the Old French “triste”, a waiting place designated when hunting.

59. Running quarterly, for short? : COIN-OP
Something that is coin-operated might run on quarters.

61. C3H8, e.g. : ALKANE
The “smaller” alkanes are gases and are quite combustible. Methane (CH4) is the main component of natural gas with ethane (C2H6) being the second largest component. Propane (C3H8) is also found in natural gas and is heavy enough to be readily turned into a liquid by compression, for ease of transportation and storage. Butane (C4H10) is also easily liquefied under pressure and can be used as the fuel in cigarette lighters or as the propellant in aerosol sprays. The heavier alkanes are liquids and solids at room temperature.

Down
2. Spartan toiler : HELOT
The helots were a population of poorly treated slaves who served the citizens of Sparta.

3. ___ Express : ACELA
The Acela Express is the fastest train routinely running in the US, getting up to 150 mph at times. The service runs between Boston and Washington D.C. via Baltimore, Philadelphia and New York. The brand name “Acela” was created to evoke “acceleration” and “excellence”.

4. What Jack got in exchange for a cow, in a children’s story : MAGIC BEANS
“Jack and the Beanstalk” is a fairy tale from England. In the story, young Jack sells the family cow for some magic beans. He plants the beans and a massive beanstalk grows up into the sky. At the top of the beanstalk there lives an ogre. Jack climbs the beanstalk, and adventures ensue …

6. Proper : DE RIGUEUR
We use the French term “de rigueur” to refer to a rigorous style of manner.

8. Grand entrance? : HARD G
The first letter of the word “grand” is a hard G.

10. Longtime Dodgers coach Manny : MOTA
Manny Mota is a retired MLB outfielder who has been coaching for the Dodgers since 1980. Mota’s tenure with the Dodgers is the second longest in Major League Baseball history.

11. Feta milk source : EWE
Feta is a Greek cheese made from sheep’s milk, or a mixture of sheep’s and goat’s milk. The cheese is salted and cured in a brine solution for several months before it is eaten.

13. Ending for AriZona flavors : -ADE
The AriZona Beverage Company makes a line of flavored iced teas. Paradoxically, the company is based in Woodbury, New York.

19. N.L. Central city : CIN
The Red Scare (i.e. anti-communist sentiment) following WWII had such an effect on the populace that it even caused the Cincinnati baseball team to change its name from the Reds. The team was called the Cincinnati Redlegs from 1953-1958, as the management was fearful of losing money due to public distrust of any association with “Reds”.

26. “Bad” cholesterol, briefly : LDL
LDL (low-density lipoprotein) is one of the compounds responsible for transporting fats around the body. When combined with cholesterol it can be referred to as “bad cholesterol” as it can build up on the inner walls of blood vessels leading to atherosclerosis.

30. Spa handout : TOWEL
The word “spa” migrated into English from Belgium, as Spa is the name of a municipality in the east of the country that is famous for its healing hot springs. The name “spa” comes from the Walloon word “espa” meaning “spring, fountain”.

38. A 40-Across may call it : TKO
In boxing, a knockout (KO) is when one of the fighters can’t get up from the canvas within a specified time, usually 10 seconds. This can be due to fatigue, injury, or the participant may be truly “knocked out”. A referee, fighter or doctor may also decide to stop a fight without a physical knockout, especially if there is concern about a fighter’s safety. In this case the bout is said to end with a technical knockout (TKO).

51. Like the Navajo language : TONAL
There are more speakers of the Navajo (also “Navaho”) language than any other Native American language north of the US-Mexico border. Famously, the Navajo language was used by the “code talkers” in the Pacific Theater during WWII to send secure communications by radio. These Navajo “coded” messages were used in fast tactical communications, with one bilingual Navajo speaker talking over the radio to another speaker, and the two acting as translators at either end of the conversation. The Navajo code was never broken by the Japanese.

52. ABC’s Arledge : ROONE
Roone Arledge was an executive at ABC. He made a name for himself in sports broadcasting and then took over ABC News in 1977, a position he held until his death in 2002.

55. World’s largest fruit company : DOLE
James Dole lent his name to today’s Dole Food Company. James Dole was known as the Pineapple King as he developed the pineapple industry in Hawaii and founded the Hawaiian Pineapple Company, the forerunner to the Dole Food Company. Dole might have had some help on the way as he was cousin to Sanford B. Dole, President of the Republic of Hawaii from 1894 to 1900.

57. Swiss stream : AAR
The Aar (also called the Aare in German) is the longest river entirely in Switzerland. A famous spot along the river is the Reichenbach Falls in the center of the country, actually a series of waterfalls near the city of Meiringen. These falls are celebrated in the world of literature as it was here that Sherlock Holmes fell to his supposed doom with his nemesis Professor Moriarty (in “The Adventure of the Final Problem”).