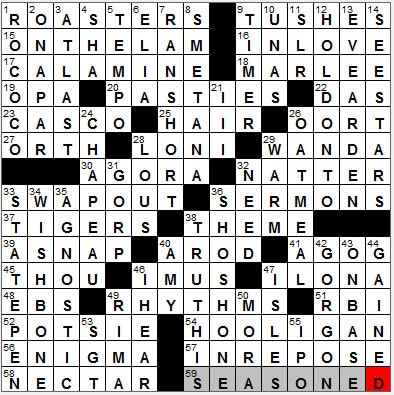 CROSSWORD SETTER: Matt Ginsberg
THEME: UPSTAIRS, DOWNSTAIRS … There’s a note with this puzzle that reads, “This puzzle has two bonus answers in appropriate places. Can you find them?” in the middle of the gird there is a diagonal of black squares running upwards from left to right, somewhat like a staircase. The letters to the left/top of this “staircase” are UPSTAIRS, and the letters directly to the right/under the “staircase” are DOWNSTAIRS. Clever!
COMPLETION TIME: 45m 36s
ANSWERS I MISSED: 0


Today’s Wiki-est, Amazonian Googlies
9. Seat cushions? : TUSHES
“Tush”, a word for the backside, is an abbreviation of “tochus” that comes from the Yiddish “tokhes”.

15. Loose : ON THE LAM
To be “on the lam” is to be in flight, to have escaped from prison. It is American slang that originated at the end of the 19th century. The word “lam” also means to “beat” or “thrash”, as in “lambaste”. So “on the lam” might derive from the phrase “to beat it, to scram”.

16. Like Fiennes’s Shakespeare : IN LOVE
I found the 1998 movie “Shakespeare in Love” to be an entertaining romantic comedy, a fictional account of Shakespeare having a love affair while in the middle of writing his famous “Romeo and Juliet”. The great cast includes Gwyneth Paltrow, Colin Firth and Judi Dench, with Joseph Fiennes in the title role.

Joseph Fiennes is an English actor, probably best known for playing the title character in the 1998 movie “Shakespeare in Love”. He comes from a family that’s full of celebrities, including his brother Ralph Fiennes who has take on many noted film roles.

17. Supply in a camper’s first-aid kit : CALAMINE
Calamine is mainly zinc oxide, with a small percentage of iron (III) oxide. Calamine is incorporated into a lotion that is used for many things, including treatment of sunburn and itching.

18. Actress Matlin : MARLEE
Marlee Matlin won her well-deserved Oscar for her role in “Children of a Lesser God”. Matlin played opposite William Hurt in the movie, and won her Academy Award in in 1986 when she was just 21 years old. My favorite performance of hers though, was the recurring role she had in “The West Wing”.

19. W.W. II inits. : OPA
President Franklin D. Roosevelt set up the Office of Price Administration (OPA) during WWII, with the intent of stabilizing prices and rents during the emergency.

20. British meat pies : PASTIES
A pasty is a meat pie, traditionally filled with beef, potato, rutabaga (swede) and onion. The most famous variety of the pie is the Cornish pasty sold in Cornwall in England. Cornish miners brought the recipe with them as they emigrated, so various versions are found around the world. I always get a pasty when I am in the Upper Peninsula of Michigan, for example.

23. Maine’s ___ Bay : CASCO
Casco Bay is on the southern part of the Maine coast, an inlet on the Gulf of Maine. The city of Portland lies on Casco Bay.

26. Kind of cloud : OORT
The Oort Cloud is a hypothetical spherical cloud of comets that lies about a light-year from the sun. It is postulated that periodic comets that enter our solar systems (like Halley’s Comet) originate in this cloud.

28. Anderson who wrote “My Life in High Heels” : LONI
Loni Anderson’s most famous role was that of Jennifer Marlowe on the sitcom “WKRP in Cincinnati”. Anderson has been married four times, most famously to actor Burt Reynolds from 1988 to 1993.

29. 1950s-’60s singer Jackson, the Queen of Rockabilly : WANDA
Wanda Jackson was one of the first female rockabilly singers, coming to prominence in the mid-fifties and sixties. As such, she earned the nickname “Queen of Rockabilly”.

30. Forum : Rome :: ___ : Athens : AGORA
In early Greece the agora was a place of assembly. Often the assemblies were quite formal, perhaps for the reading of a proclamation. Later in Greek history, things became less formal as the agora evolved into a market place. Our contemporary word “agoraphobia” comes from agora, in the sense that a sufferer has a fear of open spaces, a fear of “public meeting places”.

40. See 51-Across : A-ROD
Poor old Alex Rodriguez earned more nicknames than just A-Rod. He has been called “the Cooler” by some players as there is a perception that teams go cold when he joins them and hot when he leaves. He has also been called “A-Fraud” by teammates because of another perception, that he is over-demanding.

Howard Stern is one of the original “shock jocks” who seems now to have found his niche on uncensored satellite radio (Sirius XM). Apparently he is quite a chess player, and was invited to play in the 2010 US Chess Championships.

47. Massey of “Frankenstein Meets the Wolf Man” : ILONA
Ilona Massey was a Hollywood actress, a native of Budapest in Hungary. Given her cultural background and the period at which she hit the big screen, she was marketed by the studios as “the new Dietrich”.

48. “This is a test. For the next 60 seconds …” org. : EBS
The Emergency Broadcast System (EBS) actually doesn’t exist anymore. It was an emergency warning system that was in use in the US from 1963 to 1997. It started out as a system for the use of the US President, so that he (or she, one day let’s hope!) could address the nation in time of crisis. Towards the end of its life it was also used by state and local authorities. Thankfully, the EBS never had to be used for a national emergency. It was replaced in 1997 by the Emergency Alert System (EAS), which is still in place today.

52. Nickname for Warren Weber in an old sitcom : POTSIE
Anson Williams played the lovable Warren “Potsie” Weber character on “Happy Days”. After “Happy Days” finished its run, Williams moved into directing and has directed episodes of “Star Trek: Deep Space Nine”, “Xena: Warrior Princess”, “Sabrina the Teenage Witch”, “Melrose Place”, “Beverly Hills 90210” and other shows. But Williams’ true claim to fame has to be that he is the second cousin of Dr. Henry Heimlich, who invented the Heimlich Maneuver!

56. “I’m a walking, talking ___”: Larry David : ENIGMA
Larry David was one of the creators of the sitcom “Seinfeld”, and was a co-writer of many of the episodes. He also stars in the HBO comedy “Curb Your Enthusiasm”.

Down
1. Plain’s opposite : ROCOCO
The Rococo style is also known as “Late Boroque”. It is a very floral and playful style, very ornate.

4. Doo-wop syllable : SHA
Doo-wop developed in the 1940s and can be described as a vocal-based R&B music. Even though the style has been around since the forties, the name doo-wop wasn’t introduced until the early sixties.

5. Grave, for one : TEMPO
The tempo of a piece of music is usually designated with an Italian word on the score. For example, “grave” is slow and solemn, “andante” is at a walking pace, and “allegro” is fast, quickly and bright.

8. “The Brandenburgers in Bohemia” composer : SMETANA
Bedřich Smetana was a Czech composer, known as the father of Czech music. Just like Beethoven, Smetana was still composing at the end of his life even though he was totally deaf.

9. Scrabble accessory : TIMER
The game of Scrabble has been around since 1938, the invention of an architect named Alfred Moshoer Butts. Butts determined the optimum number of tiles for each letter in the alphabet and the appropriate point value of each tile, by analyzing letter distributions in publications like our beloved “The New York Times” …

10. Final pharaoh of the Fifth Dynasty, whose pyramid is near Cairo : UNAS
Unas was an Ancient Egyptian Pharaoh who reigned from 2375 BC to 2345 BC.

11. Canon type, briefly : SLR
SLR stands for “single lens reflex”. Usually cameras with changeable lenses are the SLR type. The main feature of an SLR is that a mirror reflects the image seen through the lens out through the viewfinder, so that the photographer sees exactly what the lens sees. The mirror moves out of the way as the picture is taken, and the image that comes through the lens falls onto unexposed film, or nowadays onto a digital sensor.

13. Classic actress who played the principal in “Grease” : EVE ARDEN
Eve Arden’s most famous role early in her career was playing the high school teacher in the 1950’s radio and television show “Our Miss Brooks”. Years later she played the Principal of Rydell High School in the movies “Grease” (great!) and “Grease 2” (terrible!).

28. “___ on First” (1981 comedian’s biography) : LOU’S
Lou Costello was of course half of the Abbot & Costello double act. One tragic and terrible event in Lou Costello’s life was the death of his baby son, Lou Costello, Jr. Lou was at NBC studios one night for his regular broadcast when he received word that the 11-month-old baby had somehow drowned in the family swimming pool. With the words, “Wherever he is tonight, I want him to hear me”, he made the scheduled broadcast in front of a live, unsuspecting audience.

31. Hiking snack : GORP
“Gorp” is the name sometimes used for trail mix, particularly by hikers. It’s not really known for sure how this name came about, but some say it stands for “good old raisins and peanuts” or perhaps “gobs of raw protein”.

35. Uncommitted : AGNOSTIC
An agnostic is someone who thinks it is impossible to know if there is a God or perhaps, more loosely, someone who is skeptical about the existence of a God.

36. Sacagawea, for one : SHOSHONE
Sacagawea was the Shoshone guide who accompanied Lewis and Clark on their famous expedition. She was hired as a guide along with her husband, a French-Canadian trapper called Toussaint Charbonneau. When the expedition set out, Sacagawea was pregnant and had her child on the journey, in early 1805. Three years after the journey ended, Charbonnonneau and his family settled in St. Louis, Missouri where Sacagawea died in 1812.

40. Minnesota senator Klobuchar : AMY
Amy Klobuchar is the first elected female senator for the State of Minnesota. For much of 2009 Klobuchar was Minnesota’s only senator, as there was that famously close race for the second senate seat between Al Franken and Norm Coleman.

42. Homer’s “dread monster” : GORGON
The Gorgons were feared female creatures of Greek mythology. They were three sisters who had hair made up of living snakes. Anyone who looked on their faces would be turned to stone instantly.

49. Italian lyrical verse : RIMA
“Rima” is the Italian for “rhyme”.

53. ___ Friday : SGT
Jack Webb played Sergeant Joe Friday on “Dragnet” on both TV and radio … and what a voice he had! Off the screen Webb was a lover of jazz, and he played the cornet. It was within the world of jazz that he met and fell in love with Julie London, the famous singer with “the smoky voice”. The couple married and had two kids together.

55. Bit of news in the financial sect. : IPO
An Initial Public Offering (IPO) is the very first offer of stock for sale by a company on the open market. In other words it marks the first time that a company is traded on a public exchange. Companies have an IPO to raise capital to expand (usually). Anyone owning stock in the company prior to the IPO can find that after that IPO that stock is now worth something on the market (as opposed to just on paper), and can become quite wealthy overnight.