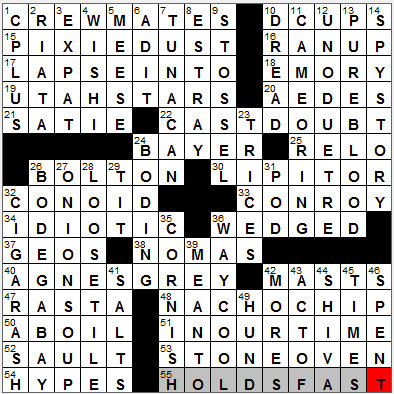 CROSSWORD SETTER: Mark Diehl
THEME: None
COMPLETION TIME: Did not finish
ANSWERS I MISSED: Several, all in the very top right of the grid


Today’s Wiki-est, Amazonian Googlies
1. Aldrin, Armstrong and Collins : CREWMATES
Apollo 11 was the most memorable of all space missions, landing the first humans on the moon on July 20, 1969. Neil Armstrong and Buzz Aldrin touched down on the moon’s surface in their landing craft “Eagle”, while Michael Collins orbited in the command module “Columbia”. It was to be the first of five moon landings that would take place from 1969-1972.

18. University next to the Centers for Disease Control headquarters : EMORY
Emory is a private school in Atlanta, with a focus on graduate research. The school was named after a Methodist Episcopal bishop called John Emory, who was very popular at the time of the school’s founding in 1836.

19. A.B.A. team that signed Moses Malone out of high school : UTAH STARS
The ABA team called the Utah Stars folded in 1975 having run out of money. The team had been founded as a charter member of the ABA in 1967 when it played in California as the Anaheim Amigos. In 1968 the franchise became the Los Angeles Stars, and finally the Utah Stars in 1970.

Moses Malone played in both the ABA and NBA. When he retired in 1995 he was the last former player from the defunct ABA who was still playing professional basketball.

20. Yellow fever carrier : AEDES
The Aedes genus of mosquito is the most invasive mosquito in the world. The word “aedes” is an Ancient Greek term meaning “unpleasant, odious”, which I think it very apt …

Yellow fever is a viral hemorrhagic disease transmitted by female mosquitoes. There are about 30,000 deaths each year from yellow fever, with almost all of them occurring in Africa.

21. “Vexations” composer : SATIE
Erik Satie was a French composer most famous for his beautiful composition, the three “Gymnopédies”. I have tried so hard to “enjoy” other works by Satie but I find them so very different from the minimalist simplicity of “Gymnopédies”.

24. Flintstones vitamins maker : BAYER
Bayer AG is a German pharmaceutical company founded in 1863. The company’s most famous product is its original brand of aspirin. The company logo, the Bayer cross, was introduced in 1904. That same logo can be seen on an illuminated sign in Leverkusen where the company is headquartered. It is the largest illuminated sign in the world.

26. U.S. United Nations representative, 2005-06 : BOLTON
John Bolton was the US Ambassador to the United Nations under President George W. Bush from 2005 to 2006. Back in 2010 Bolton publicly indicated that he might run for President in 2012, but a year later announced that he would not do so. Newt Gingrich announced that is he was elected president he would ask Bolton to serve as Secretary of State. But then, Bolton endorsed Gingrich’s opponent in the race, Mitt Romney.

30. Pfizer brand since 1997 : LIPITOR
Lipitor is the Pfizer brand name of the drug atorvastatin. Lipitor is used to lower cholesterol levels, and in 2008 was the highest-selling brand drug in the world.

37. Storms on the road : GEOS
Geos were small vehicles manufactured by General Motors mainly in the nineties. They were designed to compete head-to-head with the small imports that were gaining market share at the time in the US. Some Geo models that you might remember are the Metro, the Prizm and the Storm. The cars were actually built as joint-ventures with Japanese manufacturers. The Prizm was a GM/Toyota project, the Metro was GM/Suzuki, and the Storm was GM/Isuzu.

The term “uncle”, meaning “stop, I quit”, is a very North American expression. It has been around since the early 1900s but I could not unearth its etymology.

40. Anne Brontë’s first novel : AGNES GREY
Anne was the youngest of the three sisters in the literary Brontë family. Her older sisters wrote novels that are more recognized, but Anne’s two novels do have a following. “Agnes Grey” is based on her own experiences working as a governess. Her other novel, “The Tenant of Wildfell Hall” is written as a long letter from a young man describing the events leading up to his first meeting with his wife-to-be. Anne Brontë’s writing career was cut short in 1849, when she died of pulmonary tuberculosis, at only 29 years of age.

42. The U.S.S. Constitution has three : MASTS
“Old Ironsides” was a nickname given to the USS Constitution even though it is actually a wooden-hulled ship. She was launched in 1797 and can still be seen at sea today. She is the oldest commissioned naval vessel in the world. You can visit Old Ironsides at the Boston Navy Yard, where I had the privilege of touring her in 2011. As an old sailor, I’d say she is the best-maintained ship I’ve ever been on and paradoxically, she is also the oldest. Really, really beautiful …

47. Grounation Day celebrant : RASTA
I must admit that I don’t really understand Rastafarianism. I do know that a Rasta, like Bob Marley, is a follower of the movement. Some say it is a religion, some not. It does involve the worship of Emperor Haile Selassie I of Ethiopia.

Down
2. Loop taken on a drive? : RIATA
A riata is another name for a lariat or a lasso. So it’s a rope with a noose on the end that can be thrown from a horse, usual to catch some animal. “Riata” comes from the Spanish word for lasso, “reata”.

5. Thornburgh’s predecessor as attorney general : MEESE
Ed Meese was born in Oakland, California just down the road here, and spent 24 years in the office of the Treasurer of Alameda County, the county in which I live. After military service he earned himself a law degree at UC Berkeley. Later, as Chief of Staff for President Reagan, he was instrumental in a famous decision to crack down on student protesters at Berkeley which resulted in one protester dying and a two-week occupation of the city by the California National Guard.

Dick Thornburgh served as the Governor of Pennsylvania for eight years before becoming the US Attorney General in 1988. He served in the White House under both President Reagan and President Bush.

6. Mine entrance : ADIT
An adit is specific type of mine access, a horizontal shaft that extends into the mine. This can be compared with the more traditional vertical shaft that is used for access into most mines. Adits make sense when the ore is located inside a mountain or hill, as opposed to “underground”, as they allow the mine entrances to be on the valley floor.

8. Animal that has escaped from its owner : ESTRAY
An “estray” is … a stray! I think “estray” is mainly used as a legal term these days.

11. Provider of relief for a finger? : CAMEO RING
Cameo is a method of carving, often the carving of a gemstone or a piece of jewelry. The resulting image is in relief (sits proud of the background), whereas an engraved image would be produced by the similar carving method known as intaglio. Nowadays, the term cameo is used for any piece of oval-shaped jewelry that contains the image of a person’s head, usually in profile.

14. Le Carré specialty : SPY STORY
John Le Carré is the pen name of David Cornwell, an English author famous for his spy novels. Cornwell worked for British Intelligence during the fifties and sixties, even as he was writing his spy thrillers. He left MI6in 1963 soon after his most famous novel, “The Spy Who Came in from the Cold”, became such a great success.

26. Coastal setting of “The Birds” : BODEGA BAY
Bodega Bay is a charming little hamlet on the California coast just 40 or so miles north of San Francisco. Bodega Bay was made famous when Alfred Hitchcock used the town as a backdrop for his famous movie “The Birds”.

“The Birds” is a 1963 film made by Alfred Hitchcock based on a short story by Daphne du Maurier. I’ve read the story and seen the film and find them both strangely disturbing (it’s probably just me though!). I can’t stand the ending of either, as nothing resolves itself!

29. Bit of retribution : TIT
The phrase “tit for tat”, meaning some sort of retaliation, has been around an awfully long time, since the mid-1500s. It might be derived from “tip for tap”, meaning “blow for blow”.

31. Locust tree feature : POD
The various species known as the locust tree are apparently so called because their seed pods resemble the insect.

35. From Land’s End, e.g. : CORNISH
Cornwall is the county at the very southwest of England. The interior of Cornwall is noted for its series of stark upland moors, such as Bodmin Moor in which is found the highest elevation in the county. Cornwall is also home to Land’s End, a headland that is the most westerly point on the mainland of England.

42. Rules of conduct : MORES
Mores are the accepted customs and practices of a particular group. “Mores” is the plural of the Latin word “mos” which means “custom”.

44. Trinity member : SHIVA
The Hindu Trinity is composed of Brahma the creator, Vishnu the maintainer or preserver, and Shiva (also Siva) the destroyer or transformer. Shiva is a Sanskrit word meaning “auspicious, kind, gracious”.