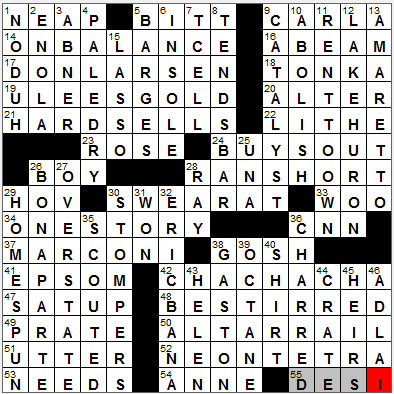 5. Mooring post on a ship : BITT
A bitt is a post mounted on the bow of a boat, used for fastening lines and cables. It is designed to be strong enough to hold a towline if necessary.

9. Head nurse on “Scrubs” : CARLA
The head nurse on the TV series “Scrubs” is a character called Carla Espinosa. Carla is played by Judy Reyes.

“Scrubs” is a comedy-drama TV show set in a fictional hospital. The show’s main character is Doctor J. D. Dorian, played by Zach Braff. “Scrubs” ran from 2001 to 2010.

16. Nautical direction : ABEAM
The beam is the widest part of a vessel. Something pointed out as lying “abeam” is something that it is 90 degrees from a line through the bow and the stern, in other words off to the right or the left.

17. Pitcher of the only no-hitter in World Series history : DON LARSEN
Don Larsen is a former Major League Baseball pitcher. Larsen pitched the sixth perfect game ever (out of 20 in MLB history) back in game 5 of the 1956 World Series. That perfect game is the only one to have been pitched in a World Series, and was in a game in which the New York Yankees beat the Brooklyn Dodgers.

18. Small truck manufacturer : TONKA
The toy manufacturer today known as Tonka started out as a manufacturer of garden implements in Mound, Minnesota in 1946. By 1955, toys had become the main line for the company. At that time the owners decided to change the company name and opted for “Tonka”, a Dakota Sioux word meaning “great, big”.

19. Highly rated 1997 film with the song “Tupelo Honey” : ULEE’S GOLD
“Ulee’s Gold” is a highly respected film from 1997 in which Peter Fonda plays the title role of Ulee. Ulee’s “gold” is the honey that Ulee produced. It is a favorite role for Peter Fonda and he has shared that the role brought into mind his father, Henry Fonda, who himself kept a couple of hives. So if you see Peter Fonda in “Ulee’s Gold” you’re witnessing some characteristics that Peter saw in his father.

22. Like yoga instructors : LITHE
In the West we tend to think of yoga as a physical discipline, a means of exercise that uses specific poses to stretch and strengthen muscles. While it is true that the ancient Indian practice of yoga does involve such physical discipline, the corporeal aspect of the practice plays a relatively small part in the whole philosophy. Other major components are meditation, ethical behavior, breathing and contemplation.

29. ___ lane : HOV
In some parts of the country one sees high-occupancy vehicle lanes (HOV lanes), but out here in California, we call them carpool lanes.

37. Inventor given a gold medal by Titanic survivors : MARCONI
Guglielmo Marconi was an inventor, famous for development of a radio telegraph design that was used across the world. Marconi did a lot of his early radio work in his native Italy, but moved to England as the British government was very interested in supporting his developments.

41. U.K. Triple Crown racecourse site : EPSOM
The Surrey town of Epsom in England is most famous for its racecourse, at which is run the Epsom Derby every year, one of the three races that make up the English Triple Crown. You might also have heard of Epsom salt. Epsom salt is magnesium sulfate, originally prepared by boiling down mineral waters. Epsom was indeed a spa town at one time.

42. Dance trio? : CHA-CHA-CHA
The cha-cha-cha is a Latin dance with origins in Cuba, where it was introduced by composer Enrique Jorrin in 1953.

49. Go on : PRATE
“To prate” is to talk idly and at length, a word that comes to us from Middle Dutch “praten”, meaning to talk or chatter.

52. Colorful Amazon swimmer : NEON TETRA
The neon tetra is a freshwater fish, native to parts of South America. It is a very popular aquarium fish and millions are imported into the US every year. Almost all of the imported tetras are farm-raised in Asia and very few come from their native continent.

55. “The Lucy-___ Comedy Hour” : DESI
Desi Arnaz was of course famous for his turbulent marriage to Lucille Ball. Desi Arnaz was a native of Cuba, and was from a privileged family. His father was Mayor of Santiago and served in the Cuban House of Representatives. However, the family had to flee to Miami after the 1933 revolution led by Batista.

Down
2. Name on a famous B-29 : ENOLA
As we all know, the Enola Gay was the B-29 that dropped the first atomic bomb, on Hiroshima in August 1945. Enola Gay was the name of the mother of the pilot, Col. Paul W. Tibbets, Jr.

3. Mammy’s son : ABNER
“Li’l Abner” was created and drawn by Al Capp for over 43 years starting in 1934. Al Capp stopped producing the strip in 1977, largely due to illness (he died from emphysema two years later). As the strip finished up, he went so far as to apologize to his long-standing fans saying that he should have stopped 3-4 years earlier as he felt that the quality of his work had gone down in those latter years.

4. Adjective applied to ginger ale : PALE DRY
The brand most closely associated with ginger ale is Canada Dry. “Canada Dry Pale Ginger Ale” was first formulated in 1904 by a Canadian chemist called John McLoughlin from Ontario. Prohibition in the United States helped sales of the drink as it was particularly effective in masking the taste of illegally-produced homemade liquor.

7. Certain lymphocyte : T CELL
T cells are a group of white blood cells that are essential components of the body’s immune system. T cells are so called because they mature in the thymus, a specialized organ found in the chest.

13. Tiramisu ingredient, often : AMARETTO
Amaretto is an Italian liqueur with a sweet almond flavor. Even though the drink is sweet, it has a bitterness lent to it by the bitter almonds that are often used as a flavoring. The name “amaretto” is a diminutive of the Italian “amaro” meaning “bitter”.

Tiramisu is an Italian cake. The name “tiramisu” translates from Italian as “pull me up”.

15. Frequent photo prop for Will Rogers : LASSO
Will Rogers was so successful as an actor that he was the highest paid Hollywood star in the 1930s. His career was cut short sadly, when he died in a plane crash in 1935. Piloting the doomed plane was famed aviator Wily Post, the first person to fly solo around the world.

26. Bourbon enemy : BONAPARTE
Despite having gone through the turmoil of the French Revolution, Napoleon Bonaparte was able to reestablish a hereditary monarchy in France and took the name of Emperor Napoleon I. He crowned himself in Notre Dame de Paris in 1804, and then crowned his wife Josephine as Empress.

32. Star of Ang Lee’s “Hulk” : ERIC BANA
Eric Bana is an Australian actor who enjoyed a successful career in his home country before breaking into Hollywood playing an American Delta Force sergeant in “Black Hawk Down”. A couple of years later he played the lead in Ang Lee’s 2003 movie “The Hulk”, the role of Dr Bruce Banner. More recently he played the Romulan villain Nero, in the 2009 “Star Trek” movie.

38. Leroux who created the Phantom : GASTON
Gaston Leroux was a French author and journalist best known for writing “The Phantom of the Opera”, first published in 1910. As a journalist, Leroux was involved in an investigation into the Paris Opera. The basement of the opera house contained a cell that was used to hold prisoners in 1871, something that Leroux featured in his most famous novel.

39. Premium number : OCTANE
The difference between a premium and regular gasoline is its octane rating. The octane rating is measure of the resistance of the gasoline to auto-ignition, it’s resistance to ignition just by virtue of being compressed in the cylinder. This auto-ignition is undesirable as multiple-cylinder engines are designed so that ignition within each cylinder takes place precisely when the plug sparks, and not before. If ignition occurs before the spark is created, the resulting phenomenon is called “knocking”.

40. What a dickey simulates : SHIRT
A dickey is a false shirt-front that can be worn with a tuxedo. Dickeys were popular in the late 1800s and were actually made of celluloid plastic. The advantage to a dickey was that it was waterproof and stain resistant.

43. Lady of Paris : HELEN
In Greek mythology, Helen of Sparta was the daughter of Zeus and Leda. She became known as Helen of Troy, as the Trojan War started when she was abducted by Paris and taken from Sparta to Troy.

In Greek legend, Paris was the son of the king of Troy. He eloped with Helen, the queen of Sparta, and this act was a major trigger for the Trojan War. Also, it was Paris who fatally wounded Achilles by shooting him in the heel with an arrow.

46. “We’re Madly for ___” (old campaign song) : ADLAI
Adlai Stevenson ran for president unsuccessfully against Eisenhower in 1952. Some years later he served under President Kennedy as Ambassador to the United Nations. He was always noted for his eloquence, and had a famous exchange in a Security Council meeting during the Cuban missile crisis. He bluntly demanded that the Soviet representative on the council tell the world if the USSR was installing nuclear weapons in Cuba, saying. “Don’t wait for the translation, answer ‘yes’ or ‘no’!” and then followed up with, “I am prepared to wait for my answer until Hell freezes over!”