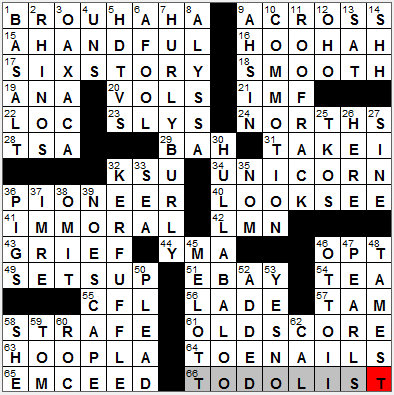 
Today’s Wiki-est, Amazonian Googlies
1. *Rumpus : BROUHAHA
“Brouhaha” was a French word that back in the 1550s meant “the cry of the devil disguised as clergy” . Wow …

19. Santa ___ : ANA
Santa Ana is the county seat of Orange County, California and takes its name from the Santa Ana River that runs through the city. The Santa Ana winds are the very dry air currents that sweep offshore late in the year in Southern California. Because they are so dry, they are noted for their influence over forest fires in the area, especially in the heat of the fall. The winds arise from a buildup of air pressure in the Great Basin that lies between the Rocky Mountains and the Sierra Nevada. Under the right conditions, that air spills over the peaks of the Sierra Nevada and basically “falls” down the side of the Sierra range, heading for the ocean. As the air falls it becomes drier and heats up, so that relative humidity can fall to below 10% by the time it hits the coast.

21. World financial grp. : IMF
The International Monetary Fund was established at the end of 1945 with 29 major economies supporting and funding the effort to stabilize economies across the globe after WWII. Headquartered in Washington, D.C., today the IMF has 187 member countries.

22. Footnote abbr. : LOC
Loc. cit. is short for “loco citato” meaning “in the place cited”. Loc. cit. is used in a footnote instead of op. cit. as it refers not only to a prior work, but also the same page in that work.

23. Stallone and Stone : SLYS
If ever there was a movie that defines a career breakthrough for an actor, it would have to be “Rocky” for Sylvester Stallone. Stallone was a struggling actor in 1975 when a Muhammad Ali fight inspired Stallone to write a screenplay for a boxing movie, which he did in just three days. His efforts to sell the script went well but for the fact that the interested studios wanted a big name for the lead role, and Stallone was determined to be the star. Stallone persevered and “Rocky” was made with him in the lead, and the movie won three Oscars. “Sly” Stallone had arrived …

Sly and the Family Stone are a rock, funk and soul band from San Francisco that’s still performing today, although their heyday was from 1966 to 1983. They were one of the first rock bands to have a racially integrated lineup, as well as representatives of both sexes.

28. Inits. on many uniforms since 2002 : TSA
The Transportation Security Administration (TSA) was of course created in 2001, soon after the 9/11 attacks.

31. George of “Star Trek” : TAKEI
Mr. Sulu was of course played by George Takei in the original “Star Trek” series. Takei has played lots of roles over the years and is still very active in television. Did you know that he appeared in the 1963 film, “Pt-109”? Not only did Takei play the helmsman on the Starship Enterprise, he played the helmsman steering the Japanese destroyer that ran down John F. Kennedy’s motor torpedo boat.

32. The Wildcats of the N.C.A.A. : KSU
The athletic teams of Kansas State University (KSU) are called the Wildcats. The Wildcats official “colors” are just one, Royal Purple. There are very few college teams with just one official color. As well as KSU there is Syracuse (Orange) and Harvard (Crimson).

34. Figure on Scotland’s coat of arms : UNICORN
The Royal Coat of Arms of Scotland was the official coat of arms used by the Scottish monarchs until the United Kingdom of Great Britain (uniting Scotland and England) was formed in 1707. The coat of arms features a shield supported by two chained unicorns on either side.

51. Web site that includes the heading “Dolls & Bears” : EBAY
eBay is an auction site with a twist. If you don’t want to enter into an auction to purchase an item, there’s a “Buy It Now” price. Agree to pay it, and the item is yours!

55. Calgary Stampeders’ grp. : CFL
The Canadian Football League was formed back in 1958, and has helped increase the popularity of football in the country, although the sport still lags behind ice hockey.

The Calgary Stampeders are the professional football team in Calgary, Alberta.

56. Ready for shipping : LADE
The verb “lade” meaning “to load” comes from an Old English word “hladan”. Lade also used to mean “to draw water” and indeed gave us our word “ladle”. So, lade and ladle, are close cousins.

58. Attack from above : STRAFE
We’ve been using “strafe” to mean an attack on a ground position from low-flying aircraft since WWII. Prior to that, the word was used by British soldiers to mean any form of attack. It was picked up from the German word for “punish” as it was used in “Gott strafe England” meaning, “May God punish England”.

63. *Foofaraw : HOOPLA
The term “hoopla” means “boisterous excitement”. It probably comes from the “houp-là”, something the French say instead of “upsy-daisy”. Then again, “upsy-daisy” probably isn’t something said very often here in the US …

65. Ran the show : EMCEED
“Emcee” come from “MC”, an abbreviation for the Master or Mistress of Ceremonies.

66. Agenda … or, together, what the seven starred clues and their answers constitute? : TO-DO LIST
“Agenda” is a Latin word meaning “things to done”, coming form the verb “agere” meaning “to do”.

Down
1. Volcanic rock : BASALT
Basalt is a volcanic rock created when lava cools rapidly at the earth’s surface.

2. Zoo critters : RHINOS
There are five types of rhinoceros that survive today, and the smaller, Javan Rhino is the most rare. The rhinoceros is probably the rarest large mammal on the planet, thanks to poaching. Hunters mainly prize the horn of the rhino, as it is used in powdered form in traditional Chinese medicine.

3. Southern Mexican state : OAXACA
Oaxaca is in the southern part of Mexico on the Pacific coast. The state takes the name of Oaxaca, its largest city.

5. Many flat-screens : HDTVS
In the digital world, resolution of a display, television, image etc. is defined by the number of pixels that can be displayed in a standard area (say a square inch). The emphasis today is on producing larger area displays/televisions, i.e increasing the number of pixels simply by increasing the size of the screen. In the past couple of decades the emphasis was on adding more pixels within the same screen size to increase resolution. That would just be wasted effort these days as further increases in resolution cannot be perceived by the eye. Now that TV’s are capable of displaying such high resolutions, broadcasters are responding by producing a video signal of “higher resolution”, which they call high-definition television (HDTV).

8. Milano of “Charmed” : ALYSSA
Alyssa Milano is an actress who started her career at a very young age. She played Samantha Micelli on “Who’s the Boss”, the daughter of the character played by Tony Danza.

9. Bret Harte/Mark Twain play : AH SIN
“Ah Sin” was a disastrous play written by Bret Harte and Mark Twain. The two writers didn’t get on at all well during the writing process, and when the play was produced for the stage it was very poorly received. Nevertheless, Twain suggested a further collaboration with Harte, and Harte downright refused!

25. Match enders, briefly : TKOS
In boxing, a knockout (KO) is when one of the fighters can’t get up from the canvas within a specified time, usually 10 seconds. This can be due to fatigue, injury, or the participant may be truly “knocked out”. A referee, fighter, or doctor may also decide to stop a fight without a physical knockout, especially if there is concern about a fighter’s safety. In this case the bout is said to end with a technical knockout (TKO).

30. *Ruckus : HULLABALOO
Our word “hullabaloo” meaning a “commotion” is a derivative of an older term “hollo-ballo”. “Hollo-ballo” was a word used for an uproar in the north of England and Scotland.

The word “ruckus” is used to mean a commotion, and has been around since the late 1800s and is possibly a melding of the words “ruction” and “rumpus”.

32. *Tumult : KERFUFFLE
“Kerfuffle” comes from the Scottish “curfuffle”, with both words meaning “disruption”.

37. Hungarian hero ___ Nagy : IMRE
Imre Nagy was twice Prime Minister of Hungary. He was ahead of his time, I think. His second term as Prime Minister came during the Hungarian Uprising against the Soviet Union in October 1956. The Soviet’s invaded of course, and arrested Nagy. He was tried in secret, sentenced to death and hanged.

39. 1994 Ray Liotta action film : NO ESCAPE
“No Escape” is a 1994 sci-fi film starring Ray Liotta. It sounds like terrible rubbish to be honest, but it was directed by the talented Martin Campbell, who used to be my next door neighbor many moons ago (just a little name-dropping) …

46. Holy Roman emperor who succeeded his father in 973 : OTTO II
Otto II was also called Otto the Red. He was the son of the Otto the Great and ruled the Saxon or Ottonian dynasty, becoming Holy Roman Emperor in 967 AD.

47. Cultured ones? : PEARLS
Nacre is another name for mother-of-pearl. Nacre is the strong iridescent material laid down by some mollusks on the inside of their shells, and it’s also what makes up pearls. The creature lays down nacre as a defensive mechanism, protecting the soft tissue of its body from the rough surface of the outer shell. Similarly, it uses nacre to encapsulate harmful debris or a parasite that penetrates the shell, and that’s how a pearl is formed.

59. Big gobbler : TOM
A male turkey is called a “tom”, taking its name from a “tomcat”. The inference is, that like a tomcat, the male turkey is relatively wild and undomesticated, sexually promiscuous and frequently getting into fights.

60. “Arabian Nights” bird : ROC
The mythical roc is a huge bird of prey, reputedly able to carry off and eat elephants.

Return to top of page Welcome!
The online version of tomorrow’s New York Times crossword is now available online, so I am probably working on my post as you read this. Tomorrow’s solution and commentary will appear here at midnight PST. Good luck solving the crossword! 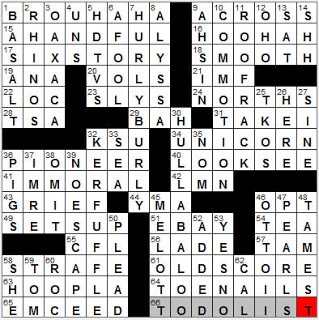