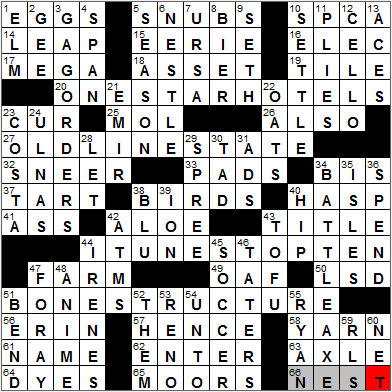 CROSSWORD SETTER: Francesco Trogu
THEME: Hidden Nests … the BIRDS at the center of the grid lay EGGS (1-across) in a NEST (66-across), and each of the themed answers contains the letters NEST hidden way somewhere:


Today’s Wiki-est, Amazonian Googlies
10. Org. that shelters dogs and cats : SPCA
Unlike in other countries, there is no “umbrella” organization in the US with the goal of preventing cruelty to animals. Instead there are independent organizations set up all over the nation using the name SPCA. Having said that, there is an American Society for the Prevention of Cruelty to Animals (ASPCA) that was originally intended to operate across the country, but really it now focuses its efforts in New York City.

16. The “E” of G.E.: Abbr. : ELEC
The General Electric Company is usually referred to simply as “GE”. One of the precursor companies to GE was Edison General Electric, founded in 1890 by the inventor Thomas Edison. What we know today as GE was formed two years later when Edison merged his company with Charles Coffin’s Thomson-Houston Electric Company. In 1896, GE was selected as one of the 12 companies listed on the newly formed Dow Jones Industrial Average. GE is the only one of the original 12 that is still on that list. I spent over ten years with GE at the beginning of my working career, and in fact it was GE who asked me to transfer to the US back in the 1980s …

17. ___ Millions (multistate lottery) : MEGA
The Mega Millions lottery game is available in most states of the US, as is its major rival, Powerball.

19. Mah-jongg piece : TILE
“Mahjong” (also mahjongg and mah-jongg) is the Chinese word for “sparrow”. Mahjong is a game that originated in China, and is usually played by four players. There is a myth that the game was developed by the Chinese philosopher, Confucius. The myth also suggests that Confucius was fond of birds, and hence chose the name “sparrow”.

27. Maryland’s nickname : OLD LI(NE ST)ATE
The Old Line State is one of the three nicknames for Maryland, along with the Free State and the Chesapeake Bay State. Maryland was dubbed the Old Line State during the American Revolution. The “Old Line” was the Maryland Line, the Maryland regular soldiers. Some say that it was George Washington himself who bestowed the name.

40. Lock fastener : HASP
The “hasp” of a lock might refer to more than one thing. The u-shape loop protruding from a padlock is often called a “lock hasp”, for example.

42. Soothing juice : ALOE
Aloe vera has a number of alternate names that are descriptive of its efficacy as a medicine. These include the First Aid plant, Wand of Heaven, Silent Healer and Miracle Plant.

44. Big Apple list : ITU(NES T)OP TEN
iTunes is a very, very successful software application from Apple. It’s basically a media player that works on platforms like the iPad, iPhone and iPod. Of course it connects seamlessly to the iTunes store, where you can spend all kinds of money.

47. Old MacDonald’s place : FARM
There was an American version of the English children’s song “Old MacDonald Had a Farm” (E-I-E-I-O), that was around in the days of WWI. The first line of the US version goes “Old Macdougal had a farm, in Ohio-i-o”.

50. ’60s “acid” : LSD
LSD (also known as “acid”) is short for lysergic acid diethylamide. A Swiss chemist called Albert Hofmann first synthesized LSD in 1938 in a research project looking for medically efficacious ergot alkaloids. It wasn’t until some five years later when Hofmann ingested some of the drug accidentally that its psychedelic properties were discovered. Trippy, man …

51. Osteoporosis threatens it : BO(NE ST)RUCTURE
The name “osteoporosis” is Greek for “porous bones”, a very descriptive name for a disease that is caused by a loss of mineral density in the bones.

56. Leprechaun land : ERIN
Erin is an anglicized version of “Éire”, the Irish word for Ireland (actually it corresponds to “Éirinn”, the dative case of ”
Éire”).

Down
1. Dutch ___ disease : ELM
Dutch elm disease is a fungus that is devastating to all species of elm trees that is transmitted by the elm bark beetle. It is thought to have originated in Asia and is now rampant in Europe and North America. Even though there is a hybrid of elm known as the Dutch elm, the disease isn’t named after the tree. Rather, the disease is called “Dutch” as it was identified in 1921 by a phytopathologist (plant pathologist) in the Netherlands.

6. Food giant whose brands include Gerber and Goobers : NESTLE
Nestlé is the world’s largest food company. It was founded in 1905 in Vevey, Switzerland where the company headquarters is to this day. Although the company came into being as the result of a merger, it retains the name of one of the co-founders, German confectioner Henri Nestlé. Henri Nestlé’s real breakthrough product was baby formula.

7. ___ Major : URSA
The constellation called Ursa Major (Latin for “Larger Bear”) is often just called the Big Dipper because of its resemblance to a ladle, or dipper. Ursa Major also resembles a plow, and that’s what we usually call it back in Ireland, the “plough”.

8. Coffin holder : BIER
Biers are the special stands on which one rests a coffin for a service, or perhaps if the corpse is to lie in state. A bier may have wheels on it so that it can be used to transport the coffin to the graveside. The original biers were just flat pieces of wood on which the body was placed, covered with a shroud. Nowadays, we place the body in a casket, and then onto the biers.

9. Rogen of “Superbad” : SETH
Seth Rogen is a Canadian comedian who got a lot of credit for his supporting role in “The 40-Year-Old Virgin”. That led to him being cast as the lead in the 1970 film “Knocked Up”. I am afraid that I haven’t seen either movie …

“Superbad” is a comedy movie released in 2007. The script for the film was written by Seth Rogen and Evan Goldberg. Rogen and Goldberg started work on the script when they were just thirteen years old, with the first draft being completed by the time they were fifteen.

12. Rostropovich’s instrument : CELLO
When the world famous cellist Mstislav Rostropovich saw the live images of the Berlin Wall coming down, he grabbed his cello and flew from his adopted homeland of America to be part of the historic event. Rostropovich was born in the Soviet Union but had lived in exile since 1974. There is memorable video footage of the great cellist performing for the crowds, sitting on a chair, right beside the wall.

21. Ruler of Kuwait : EMIR
An emir is prince or chieftain, most notably in the Middle East. In English, “emir” can also be written as “amir” and “ameer” (watch out for those spellings in crosswords!).

22. Cheerios are made with them : OATS
Cheerios breakfast cereal has the distinction of being the first oat-based cereal introduced into the market, in 1941. Back then it was called CheeriOats.

35. Spots in the Caribbean : ISLES
The Caribs are an American Indian people that live in the Lesser Antilles islands, part of the West Indies. The Caribbean Sea takes its name from the Carib people.

38. ___-ray Disc : BLU-
A Blu-ray disc looks just like a standard DVD or CD, but it has a lot more capacity for data storage making it an ideal medium for high-definition movies. The name “Blu-ray” comes from the fact that a Blu-ray player uses a “blue laser” to read the disc, unlike a standard DVD which uses a “red laser”.

43. Bean curd : TOFU
Tofu is another name for bean curd, and is a Japanese word meaning just that … bean that has “curdled”. Tofu is produced by coagulating soy milk, using either salt or something acidic. Once the protein has coagulated, the curds are pressed into the familiar blocks. Personally I love tofu, but my wife, she hates it …

44. Actresses Worth and Dunne : IRENES
Irene Worth was an American actress from Nebraska who made a big name for herself not only in this country but also on the stage in London.

Irene Dunne was a wonderful, and beautiful, Hollywood actress. She played a variety of roles, but I always think of her as the leading lady with Cary Grant in the movies “The Awful Truth”, “My Favorite Wife” and “Penny Serenade”. Irene Dunne was great friends with fellow actress Loretta Young and the two often attended church together. Dunne is often described as the best actress never to win an Oscar, even though she was nominated five times for the Best Actress Award.

45. World Cup sport : SOCCER
Uruguay won the soccer gold medals at both the 1924 and 1928 Olympic tournaments. When Jules Rimet, the president of soccer’s international governing body (FIFA), decided to start an international tournament outside of the Olympics, it was decided to give Uruguay the honor of hosting the first competition. Sure enough, Uruguay emerged victorious as the first FIFA World Cup winner in 1930. Sadly, Uruguay haven’t won since.

46. Spuds : TATERS
The term “spud” is used as a slang term for a potato and was first recorded in the mid-1800s, in New Zealand would you believe?

53. City near Lake Tahoe : RENO
Reno, Nevada was named in honor of Major General Jesse Lee Reno, a Union officer killed in the Civil War. The city has a famous “Reno Arch”, a structure that stands over the main street. It was erected in 1926 to promote an exposition planned for the following year. After the expo, the city council decided to keep the arch and held a competition to decide what wording should be displayed, and the winner was “The Biggest Little City in the World”.

Lake Tahoe is up in the Sierra Nevada mountains right on the border between California and Nevada. Lake Tahoe is the largest alpine lake in the country. It’s also the second deepest lake, with only the beautiful Crater Lake in Oregon being deeper. Given its location, there are tall casinos that sit right on the shore on the Nevada side of the state line where gambling is legal.

55. Actor Gosling : RYAN
Ryan Gosling is a Canadian actor who really seems to be riding high right now. He is one of a string of entertainers to graduate from the Mickey Mouse Club on the Disney Channel. I saw him not too long ago in the fun romantic comedy “Crazy, Stupid, Love” starring alongside Steve Carell.

60. Badminton feature : NET
The game of badminton was developed in the mid-1700s by British military officers in India. There was already an old game called battledore and shuttlecock, so the creation of badminton was essentially the addition of a net and boundary lines for play. The game was launched officially as a sport in 1873 at Badminton House in Gloucestershire in England, giving it the name that we now use.