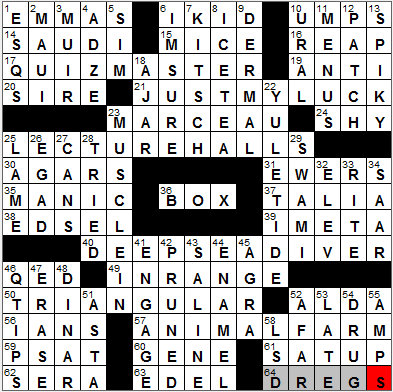 CROSSWORD SETTER: Joe Krozel
THEME: Box in a Box … the letters BOX don’t appear anywhere in the puzzle, except in the box in the middle of the grid:

36A. Enclosure … and an alphabetical listing of letters not appearing elsewhere in this puzzle’s answer : BOX


Today’s Wiki-est, Amazonian Googlies
1. Actress Stone and others : EMMAS
The actress Emma Stone really came to prominence with her performance in the 2010 high school movie called “Easy A”.

14. Meccan, e.g. : SAUDI
Mecca is in the Makkah province of Saudi Arabia and is the holiest city in Islam. Every year, several million Muslims perform the Hajj, a holy pilgrimage to Mecca.

15. Ones sitting on pads : MICE
A computer mouse often sits on a mousepad.

23. French expert in body language? : MARCEAU
Marcel Marceau was the most famous mime of all time, a native of Strasbourg in France. Marceau made a cameo appearance in Mel Brooks’s “Silent Movie”, playing himself. In the scene, Mel Brooks is asking Marceau to appear in his movie (a question asked silently of course, in subtitles), and Marceau turns to the camera and speaks the only word in the whole film, “Non!” (French for “No!”). The mime speaks! Brilliant …

30. Solidifying agents : AGARS
Agar is a jelly extracted from seaweed that has many uses. It is found in Japanese desserts, and can also be used as a food thickener or even as a laxative. In the world of science it is the most common medium used for growing bacteria in Petri dishes.

38. A Ford : EDSEL
It was Henry Ford’s son, Edsel, who gave his name to the Edsel brand of automobile, a name that has become synonymous with “failure”.

46. Logical ending : QED
QED is used at the end of a mathematical proof or a philosophical argument. The acronym stands for the Latin “quod erat demonstrandum” meaning “that which was to be demonstrated”.

52. Host of PBS’s “Scientific American Frontiers” : ALDA
Alan Alda had a great television career, especially of course on “M*A*S*H”. But when it comes to the big screen, my favorite of his movies is the 1978 romantic comedy “Same Time, Next Year” in which he starred opposite Ellen Burstyn.

56. Baseball All-Star Kinsler and others : IANS
Ian Kinsler is a second baseman for the Texas Rangers MLB baseball team.

57. “1984” shelfmate : ANIMAL FARM
“Animal Farm” is the 1945 novella written by George Orwell, a satire of life in the Soviet Union under Joseph Stalin. Orwell had trouble getting his novel published in his homeland of the UK during WWII, as anti-Soviet literature wasn’t a good thing to publish while the UK and USSR were on the same side of a World War. In fact, one publisher who was willing to distribute the book changed his mind after being warned off by the British Ministry of Information. Given his experiences, I find it interesting that Orwell should write “Nineteen Eight-Four” a few years later, and introduce the world to Big Brother.

60. Part of some pools : GENE
A gene is a section of a chromosome that is responsible for a particular characteristic in an organism. For example, one gene may determine eye color and another balding pattern. We have two copies of each gene, one from each of our parents, with each copy known as an allele.

64. Least desirable parts : DREGS
The dregs in wine, the sediment that settles during fermentation (and sometimes in the bottle), is also called “lees”.

Down
1. A.B.A. members’ titles : ESQS
The title “esquire” is of British origin and is used differently today depending on whether one is in the US or the UK. Here in America the term is usually reserved for those practicing the law (both male and female). In the UK it is a term of gentle respect reserved for a male who has no other title that one can use. So a mere commoner like me might receive a letter from the bank say, addressed to W. E. Butler Esq.

2. Wailuku’s county : MAUI
Maui is the second largest of the Hawaiian islands. Maui is sometimes called the “Valley Isle” as it is composed of two volcanoes to the northwest and southeast of the island, each with numerous beautiful valleys carved into them.

Wailuku was the main tourist destination on Maui in the early 20th century. It lies on the north coast of the island. Most people stay at resort towns now though and there are very few hotels in Wailuku.

3. California’s ___ Woods : MUIR
Muir Woods is a National Monument located not too far from here, just north of San Francisco. It is home to enormous old growth Coast Redwood trees. The land was declared a National Monument in 1908 by President Theodore Roosevelt. The name “Muir Woods” was chosen in honor of the naturalist John Muir.

4. Wood shop shaper : ADZE
An adze (also adz) is similar to an axe, but different in that the blade of an adze is set at right angles to the tool’s shaft. An axe’s blade is set in line with the shaft.

5. “Scrooge” star, 1951 : SIM
As far as I am concerned, the definitive screen adaptation of the Charles Dickens novella “A Christmas Carol”, is the 1951 film of the same name starring the wonderful actor Alistair Sim as Ebenezer Scrooge. If you don’t own it, then you have got to buy it for next Christmas!

7. Lawn flamingos and such : KITSCH
“Kitsch” is a German word, an adjective that means “gaudy, trash”.

9. With 12-Down, lidocaine delivery option : DERMAL
(12. See 9-Down : PATCH)
Lidocaine is a very common local anaesthetic used by dentists and doctors.

10. Risk board territory : URAL
Risk is a fabulous board game, first sold in France in 1957. Risk was invented by a very successful French director of short films called Albert Lamorisse. He called his new game “La Conquête du Monde”, which translates into English as “The Conquest of the World”. A game of Risk is a must during the holidays in our house …

18. Cracked open : AJAR
Our word “ajar” is thought to come from Scottish dialect, in which “a char” means “slightly open”.

22. Stocking-up time? : YULETIDE
“Yule” celebrations coincide with Christmas and the words “Christmas” and “Yule” have become synonymous in much of the world. However, Yule was originally a pagan festival celebrated by Germanic peoples. The name “Yule” comes from the Old Norse word “jol” that was used to describe the festival.

26. Quaint euphemism : EGAD
“Egad” developed as a polite way of saying “oh God” in the late 1600s and is an expression of fear or surprise somewhat like “good grief!”.

29. Pundit : SWAMI
A swami is a religious teacher in the Hindu tradition.

34. Mosel tributary : SAAR
The Saar is a river that rises on the border between Alsace and Lorraine in France, flows through western Germany and finally entering the Moselle. Historically the Saar river valley was an important source for coal, iron and steel.

45. Home to a much-visited tomb : AGRA
The most famous mausoleum in the world has to be the Taj Mahal in Agra, India. The Taj Mahal was built after the death of the third wife of Shah Jahan, Mumtaz Mahal (hence the name of the mausoleum). The poor woman died in childbirth delivering the couple’s 14th child!

46. Sticks in a makeup bag : Q-TIPS
Cotton swabs were originally marketed under the name “Baby Gays”, but this was changed in 1926 to “Q-Tip”, with the Q standing for “quality”.

48. Mosul money : DINAR
The denarius (plural “dinarii”) is a small silver coin that was used in Ancient Rome. Derived from the Latin “deni” meaning “containing ten”, a denarius had the value of ten asses. Today the dinar is a common coin in the Arab world that is named for the old Roman coin. The dinar name was chosen in the days when Arabs were conquering large swathes of the old Roman Empire.

Mosul lies in northern Iraq and is the third largest city in the country, after Baghdad and Basra.

51. The Charleses’ pet : ASTA
Asta was the wonderful little dog in the superb movie “The Thin Man” starring William Powell and Myrna Loy (as Nick and Nora Charles). In the original story by Dashiell Hammett, Asta was a female Schnauzer, but on screen Asta was played by a wire-haired fox terrier called “Skippy”. Skippy was also the dog in “Bringing up Baby” with Cary Grant and Katherine Hepburn, the one who kept stealing the dinosaur bone. Skippy retired in 1939, so Asta was played by other dogs in the remainder of “The Thin Man” films.

58. 54-Down for a trip : LSD
LSD (also known as “acid”) is short for lysergic acid diethylamide. A Swiss chemist called Albert Hofmann first synthesized LSD in 1938 in a research project looking for medically efficacious ergot alkaloids. It wasn’t until some five years later when Hofmann ingested some of the drug accidentally that its psychedelic properties were discovered. Trippy, man …