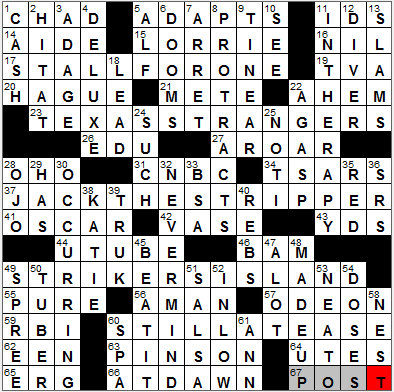 CROSSWORD SETTER: Alan Arbesfeld
THEME: Start with an ST … each of the theme answers are common expressions with the letters ST added to the front of one word:

17. Private quarters in a stable? : (ST)ALL FOR ONE
23. Dallas tourists, perhaps? : TEXAS (ST)RANGERS
37. Name for a bachelorette party performer? : JACK THE (ST)RIPPER
49. Vacation spot for some who stop working? : (ST)RIKER’S ISLAND
60. Not saluting for quite some time? : (ST)ILL AT EASE


Today’s Wiki-est, Amazonian Googlies
1. Africa’s Lake ___, body of water in four countries : CHAD
Lake Chad is a very large and shallow lake in Africa, one that changes size dramatically in a very short space of time. Lake Chad shrank by a massive 95% from 1963 to 1998, but has been recovering ever since. Parts of the lake lie within the countries of Chad, Cameroon, Niger and Nigeria.

15. Moore who wrote “A Gate at the Stairs” : LORRIE
Lorrie Moore is a writer from Glen Falls, New York, who is noted for her short stories.

19. New Deal inits. : TVA
The Tennessee Valley Authority has to be one of America’s great success stories when it comes to economic development. Created in 1933, the TVA spearheaded economic development in the Tennessee Valley at the height of the Great Depression. Central to the success was the federally-funded construction of flood-control and electricity-generation facilities.

20. Court site, with “The” : HAGUE
Den Haag is the Dutch name for the city in the Netherlands that we know in English as The Hague. Even though The Hague is the seat of the Dutch parliament and is where Queen Beatrix resides, it is not the country’s capital city. That honor goes to Amsterdam.

21. Dole : METE
To “mete out” is to distribute by allotments. The verb comes from the Old English word “metan” meaning “to measure”, which is also believed to be the root of our word “meter”.

23. Dallas tourists, perhaps? : TEXAS (ST)RANGERS
The Texas Rangers Major League Baseball team is based in Arlington, Texas just outside Dallas. The team was founded as the Washington Senators in 1961, and ended up in Texas in ten years later. The team is named after the famous Texas Rangers law enforcement agency.

26. URL ender : EDU
A domain name is basically the address of a website on the Internet. About a year ago I moved the website for this blog to a new address (from puzzle.paxient.com to NYTCrossword.com). Like in the real world, one pays for an address. I now own (well rent!) both of the addresses used for this blog, but choose to “do business”, publish the blog, at the more memorable address … NYTCrossword.com. It’s sort of like preferring to have a Park Avenue address instead of one on say Elm Street. In the Internet world, elements of the domain name are intended to indicate what type of activity goes on at a particular address. So an address with “.com” implies a “company” website, a “.org” implies a non-profit website and “.edu” implies an education website. But in reality anyone can rent whatever address they want, as it just goes to the highest bidder. Most folks remember “.com” addresses, so they are the most popular. “.com” is meant to imply a “business address” as I say, but it can even be used for somewhere to chat about crosswords!

31. What may give you the business? : CNBC
CNBC is a business news channel owned by NBC. Launched in 1989, up until 1991 it was known as the Consumer News and Business Channel.

34. Old line in Russia : TSARS
The last ruler of Imperial Russia was Tsar Nicholas II (of the House of Romanov). Famously, the Tsar and his family were murdered in 1918 in the basement of a house in Yekaterinburg, Russia by members of the Bolshevik secret police. The Tsar’s youngest daughter was 16-year-old Anastasia and rumors of her escape have persisted for years. The rumors grew with the help of numerous women who claimed to be Anastasia, but DNA testing has proven that all claims were false. In 2009, DNA testing finally proved that the remains of all of the Tsar’s immediate family, including Anastasia, have been found and identified.

37. Name for a bachelorette party performer? : JACK THE (ST)RIPPER
Jack the Ripper was one of the names given to a serial killer who terrorized the Whitechapel district of London in 1888. The murders were particularly gruesome, and were all directed towards female prostitutes that worked in the area. The victims had their throats cut and then had their abdominal organs mutilated and sometimes removed. Eleven women were killed, and the murderer was never apprehended.

41. Announcement that comes from an envelope : OSCAR
The Academy of Motion Picture Arts and Sciences (AMPAS) is the organization that gives the annual Academy Awards also known as the “Oscars”. The root of the name “Oscar” is hotly debated, but what is agreed is that the award was officially named “Oscar” in 1939.

49. Vacation spot for some who stop working? : (ST)RIKER’S ISLAND
Rikers Island is the main jail in New York City and is located on Rikers Island in the East River, close to the runways of LaGuardia Airport.

57. Classic theater : ODEON
In Ancient Greece an odeon was like a small theater, with “odeon” literally meaning a “building for musical competition”. Odea were used in both Greece and Rome, for entertainments such as musical shows and poetry readings.

59. Result of bringing someone home, for short : RBI
Runs Batted In (RBIs).

64. Pac-12 team : UTES
The Runnin’ Utes are the basketball team of the University of Utah. The team was given the nickname the Runnin’ Redskins back when Jack Gardner was the head coach from 1953 to 1971. The “Runnin'” part of the name was chosen because Gardner was famous for playing quick offenses. The “Redskins” name was later dropped in favor of the less controversial “Utes”.

65. Bit of work : ERG
An erg is a unit of energy or mechanical work. “Erg” comes from the Greek word “ergon” meaning “work”. A dyne is a unit of force. The name “dyne” comes from the Greek “dynamis” meaning “power, force”. Ergs and dynes are related to each other in that one erg is the amount of energy needed to move a force of one dyne over a distance of one centimeter.

Down
5. 1980s sitcom filmed with a puppet : ALF
“ALF” was a sitcom that aired in the late eighties. ALF was a hand-puppet, supposedly an alien that crash-landed in a suburban neighborhood. “ALF” stands for “alien life form”.

7. Stop over in Paris? : ARRET
“Arrêt” is the French word for stop.

18. Alchemy material : LEAD
One of the main goals of the ancient practice of alchemy was to change base metals into gold, a process known as transmutation.

33. Big inits. in camping : BSA
As every little boy knows, the Scouting movement was founded by Lord Baden Powell, in 1907. The Boy Scouts of America (BSA) soon followed, in 1910.

36. Alums-to-be: Abbr. : SRS
An “alumnus” (plural … alumni) is a graduate or former student of a school or college. The female form is “alumna” (plural … alumnae). The word comes into English from Latin, in which alumnus means foster-son or pupil.

38. Actress Holmes : KATIE
Katie Holmes is an actress who first came to prominence in the television drama “Dawson’s Creek”. Off screen she is famous as the wife of Tom Cruise.

39. W.W. II Pacific battle site : TRUK
Chuuk (formely called “Truk”) is an island group in the southwest Pacific. Chuuk was the main base in the South Pacific for the Japanese Empire during WWII.

50. Yam, e.g. : TUBER
Although in the US we sometimes refer to sweet potatoes as “yams”, the yam is actually a completely different family of plant. True yams are more common in other parts of the the world than they are in this country, and especially in Africa.

51. It’s often made with peppers and onions : SALSA
“Salsa” is simply the Spanish for “sauce”.

60. Kind of treatment : SPA
The word “spa” migrated into English from Belgium, as Spa is the name of a municipality in the east of the country that is famous for its healing hot springs. The name “Spa” comes from the Walloon word “espa” meaning “spring, fountain”.

61. Cape ___ : ANN
Cape Ann is 30 miles north of Boston and is on the northernmost edge of Massachusetts Bay. The Cape was first mapped by the explorer John Smith. Early in his adventurous life Smith had been captured and enslaved by the Ottoman Empire. His “owner” in his days of slavery was a woman called Tragabigzanda, and apparently the slave and owner fell in love. What we know today as Cape Ann, Smith originally called Cape Tragabigzanda, in her memory.