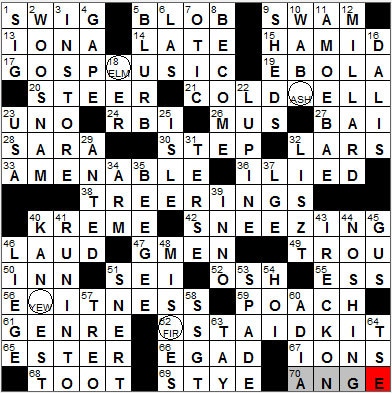 CROSSWORD SETTER: Gareth Bain
THEME: Three-Lettered Trees … this is a rebus puzzle, with four squares each containng a ring, and each ring containing the name of a tree that has three letters in its name:

38A. Indicators of age … and a hint to this puzzle’s theme : TREE RINGS


Today’s Wiki-est, Amazonian Googlies
5. Classic sci-fi terror, with “the” : BLOB
The 1958 horror film “The Blob” was the first movie in which Steve McQueen had a leading role. “The Blob” wasn’t a success at all, until Steve McQueen became a star that is. Using McQueen’s name, the movie was re-released and gained a cult following and was particularly successful at drive-in theaters.

9. Began a triathlon : SWAM
An Ironman Triathlon is a race involving a 2.4 mile swim, a 112 mile bike ride and a marathon run of just over 26 miles. The idea for the race came out of a debate between some runners in the 1977 Oahu Perimeter Relay. They were questioning whether runners, swimmers or bikers were the fittest athletes. The debaters decided to combine three local events to determine the answer, inviting athletes from all three disciplines. The events that were combined to come up with the first triathlon were the Waikiki Roughwater swim (2.4 miles), the Around-Oahu Bike Race (115 miles) and the Honolulu Marathon (26.2 miles). The idea was that whoever finished first “we’ll call him the Iron Man”. The first triathlon was run in 1978, with fifteen starters and only twelve finishers. The race format is used all over the world now but the Hawaiian Ironman is still the event that everyone wants to win.

15. Afghanistan’s Karzai : HAMID
Hamid Karzai is the current President of Afghanistan, coming to power in 2004 after the Taliban were overthrown. He started a second 5-year term as President in 2009.

17. What the annual Dove Awards are awarded for : GOSP(EL M)USIC
The Dove Awards are presented annually by the Gospel Music Association for achievements in the Christian music industry. The awards take their name from the gilded dove that is depicted on each statuette.

19. “The Hot Zone” virus : EBOLA
The Ebola virus causes a very nasty form of hemorrhagic fever. The name of the virus comes from the site of the first known outbreak, in a mission hospital in the Ebola River Valley in the Democratic Republic of the Congo.

“The Hot Zone” is a 1994 book written by Richard Preston, a non-fiction work describing the history of hemorrhagic fevers (and Ebola in particular).

21. Like winter in Siberia : COLD (AS H)ELL
Siberia is a vast area in Northern Asia. The region’s industrial development started with the construction of the Trans-Siberian railway from 1891 to 1916, which linked Siberia to Russia in the west.

23. Game with Skip and Reverse cards : UNO
In my youth I remember being taught a great card game, by a German acquaintance of mine, called Mau Mau. Years later I discovered that Uno is basically the same game, but played with a purpose-printed deck instead of the regular deck of playing cards that’s used for Mau Mau.

27. “The Crow” actress ___ Ling : BAI
Bai Ling is a Chinese actress who moved to the US in 1994. Apparently she claims she is from the moon, and her grandmother still lives there …

28. Song title for both Fleetwood Mac and Starship : SARA
Fleetwood Mac was founded in 1967 in London. The band was started by Peter Green, and he chose the name from two friends in former bands (named Fleetwood and McVie). This is depite the fact the drummer’s name happens to be Mick Fleetwood.

32. Phyllis’s never-seen TV husband : LARS
Phyllis Lindstrom was played by Cloris Leachman in “The Mary Tyler Moore Show”. Phyllis was married to a dermatologist, Dr. Lars Lindstrom. Leachman rated a a spin-off show in 1975 called “Phyllis”, which was set not in Minneapolis but in San Francisco. Phyllis relocated to San Francisco with her daughter after the death of husband.

38. Indicators of age … and a hint to this puzzle’s theme : TREE RINGS
Growth rings can be seen in a horizontal cross section of a tree trunk. These rings are caused by a change in the rate of a growth of a tree that comes with the seasons, so the rings are more easily discerned in trees that grow in regions with marked seasonal changes.

46. Sing a paean to : LAUD
A paean is a poem or song that expresses triumph or thanksgiving. “Paean” comes from the ancient Greek “paian” meaning “song of triumph”.

47. Pursuers of the Sopranos, for short : G-MEN
The nickname “G-men” is short for “Government Men”, and refers to agents of the Federal Bureau of Investigation.

“The Sopranos” is an outstanding television drama that was made by HBO, a story about Italian-American mobsters in New Jersey. “The Sopranos” has made more money than any other television series in the history of cable television. It’s “must see TV” …

50. “Newhart” setting : INN
“Newhart” is a very entertaining sitcom starring Bob Newhart and Mary Frann as innkeepers in rural Vermont. The show is remembered by many for its last episode, which aired in 1990. In that final episode, Bob Newhart wakes up in bed and suggests that the whole of the show’s eight-year run was just a dream. He is lying beside actress Suzanne Pleshette who played his wife in the earlier sitcom “The Bob Newhart Show”. Very, very clever …

52. City of Kyrgyzstan : OSH
Osh is the second largest city in the former Soviet Republic of Kyrgyzstan. Osh was a center of silk production and lies along the old Silk Road, the trade route that traversed Asia.

61. Noir or comedy : GENRE
The expression “film noir” has French origins, but only in that it was “created” by a French critic in describing a style of Hollywood film. The term, meaning “black film” in French, was first used by Nino Frank in 1946. Film noir often applies to a movie with a melodramatic plot and a private eye or detective at its center. Good examples would be “The Big Sleep” and “D.O.A”.

65. Perfumer’s compound : ESTER
Esters are very common chemicals. The smaller low-molecular weight esters are usually pleasant smelling and are often found in perfumes. At the other end of the scale, the higher-molecular weight nitroglycerin is a nitrate ester and is very explosive, and polyester is a huge molecule and a type of plastic.

67. Accelerator particles : IONS
In a particle accelerator, the particles that are accelerated have to have a charge, so are ions. The charged ions are subjected to high magnetic fields that propel them around a circular “racetrack”, before being smashed into something, just to see what happens!

68. Drunken spree : TOOT
“Toot” is slang for a binge of drinking, and for a snort of cocaine. Not good either way, I guess …

Down
2. Ian who won the 1991 Masters : WOOSNAM
I’ve always thought that Ian Woosnam is the most unlikely-looking of golfers. He is just over 5’ 4” tall and yet is noted as a very powerful hitter of the ball. Woosnam is a Welshman, and was ranked the world’s number one golfer for most of 1991.

5. Words on a jacket : BLURB
There is a “blurb” on most book jackets.

10. Indiana river : WAB(ASH)
The Wabash River is the largest northern tributary of the Ohio River. The Wabash is the state river of Indiana and takes its name from the French “Ouabache”. French traders gave it this name after a Miami Indian word meaning “it shines white”.

11. Sights on slides : AMOEBAE
An ameba (or “amoeba” as we spell it back in Ireland) is a single-celled microorganism. The name comes from the Greek “amoibe”, meaning change. The name is quite apt, as the cell changes shape readily as the ameba moves, eats and reproduces.

12. President Fillmore : MILLARD
Vice President Millard Fillmore took over the US Presidency when Zachary Taylor died after only 16 months in office. Fillmore was born in the Finger Lakes region of New York State, but grew up around Buffalo. He was one of the founders of the University of Buffalo and served as chancellor there after he left office in 1853.

18. Name for a bull : (ELM)ER
Elsie the Cow is the mascot of the Borden Company. Elsie first appeared at the New York World’s Fair in 1939, introduced to symbolize the perfect dairy product. Elsie was also given a husband, Elmer the Bull, who eventually moved over to the chemical division of Borden where he gave his name to Elmer’s Glue.

32. “Hungarian Rhapsodies” composer : LISZT
Franz Liszt (1811-1886) was a Hungarian composer and a fabulous pianist. Particularly towards the end of his life, he gained a tremendous reputation as a teacher. While he was in his sixties, his teaching profession demanded that he commute regularly between the cities of Rome, Weimar and Budapest. It is quite remarkable that a man of such advanced age, and in the 1870s, could do so much annual travel. It is estimated that Liszt journeyed at least 4,000 miles every year!

34. Part of a slot machine : ARM
Slot machines earned the nickname “one-armed bandits” simply because they had “one arm”, the handle pulled to operate the machine, and they robbed you of all your money!

35. Any of the “Stayin’ Alive” singers : BEE GEE
The Brothers Gibb (hence, the name “The Bee Gees”) were born in England, but grew up and started their musical careers in Australia. They moved back to Manchester in the north of England, and then hit the big time.

“Stayin’ Alive” was one of the songs from “Saturday Night Fever”. Terrible film, fabulous music …

45. NASA’s Grissom : GUS
Gus Grissom was the second American to fly in space, and the first astronaut at NASA to make two space flights. Sadly, Grissom was one of the three astronauts that died in a terrible launch pad fire 1967.

46. Feudal subject : LIEGE
A liege was feudal lord, one to whom service or allegiance was owed under feudal law.

51. Dog in the funnies : SNERT
Snert is the clever dog who belongs to Hägar the Horrible in the classic comic strip.

“Hagar the Horrible” was created by the late Dik Browne and is now drawn by his son, Chris Browne. “Hagar the Terrible” (not “Horrible”) was the nickname given to Dik by his sons.

53. Classic Bogart role : SPADE
The classic detective novel “The Maltese Falcon” was written by Dashiell Hammett, and first published in 1930. The main character if of course Sam Spade, famously played by Humphrey Bogart in the third movie adaptation of the book, released in 1941.

54. ___ polloi : HOI
“Hoi polloi” is a Greek term, literally meaning “the majority, the many”. In English it has come to mean “the masses” and is often used in a derogatory sense.

57. Palm smartphone : TREO
The Treo is a smartphone that was originally developed by a company called Handspring. Handspring was bought by Palm Inc.

58. Army NCO : SSGT
Staff Sergeant is a rank of Non-Commissioned Officer in the army.

60. 1998 Sarah McLachlan hit : ADIA
Apparently the song “Adia”, co-written by Sarah McLachlan, was intended as an apology to her best friend … for stealing her ex-boyfriend and then marrying him!

63. Scotland’s Firth of ___ : TAY
The Firth of Tay is an inlet on the east coast of Scotland into which empties Scotland’s largest river, the Tay. The city of Dundee lies on the Firth, and the city of Perth just inland on the Tay.

64. Mao ___-tung : TSE
Mao Zedong was born on December 16, 1893 in the Hunan Province of China. As he was the son of a peasant farmer his prospects for education were limited. Indeed he left school at age 13 to work on the family farm but did eventually get to secondary school in Changsa, the provincial capital. In the years following he continued his education in Beijing, and actually turned down an opportunity to study in France.