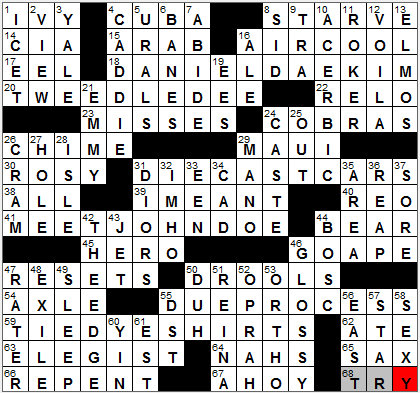 
Today’s Wiki-est, Amazonian Googlies
1. Brown, Penn or Harvard : IVY
The term “Ivy League” originally defined an athletic conference, but now it is used to describe a group of schools of higher education that are associated with both a long tradition and academic excellence. The eight Ivy League Schools are: Brown, Columbia, Cornell, Dartmouth, Harvard, Princeton, the University of Pennsylvania, and Yale.

4. Locale of Guantánamo Bay : CUBA
The Guantánamo Bay Naval Base is often referred to by using abbreviation “GTMO” or simply “Gitmo”.  Gitmo is the oldest overseas base operated by the navy and dates back to the Cuban-American Treaty of 1903, at which time the US leased the facility as a fueling station. A perpetual lease was offered by Tomas Estrada Palma, the first President of Cuba, after the US took over control of Cuba from Spain following the Spanish-American War of 1898.

14. “The Good Shepherd” org. : CIA
“The Good Shepherd” is a spy movie released in 2006, directed by Robert De Niro. The lead roles are played by Matt Damon and Angelina Jolie. The film is a fictional account of real events that led to the birth of counter intelligence within the CIA. This is normally my kind of plotline but somehow I missed seeing this one. I’ll have to put it on the list …

15. Omani or Yemeni : ARAB
Oman lies on the southeast coast of the Arabian Peninsula, neighbored by the OAE, Saudi Arabia and Yemen. The capital city of Muscat has a strategic location on the Gulf of Oman and has a history of invasion and unrest. Centuries of occupation by the Persians ended in 1507 when the Portuguese took the city in a bloody attack. The Portuguese held Muscat for much of the next one hundred years until finally ousted by local Omani forces in 1648. A Yemeni tribe invaded the area in 1741 and set up a monarchy that has been in place ever since.

Yemen is located on the Arabian Peninsula, lying just south of Saudi Arabia and west of Oman. Yemen is the only state on the peninsula that is a republic (its official name is the Republic of Yemen). Everyone over the age of 18 gets to vote, but only Muslims can hold elected office.

24. “King” serpents : COBRAS
The king cobra isn’t a cobra at all and rather belongs to its own genus. The king cobra is the world’s longest venomous snake and can grow to over 18 feet in length.

29. Site of Haleakala National Park : MAUI
If you visit Maui, a visit to the Haleakala National Park is a must. One section of the park features the spectacular Haleakala Crater, where you would swear you are on the moon. The second part of the park is the Kipahula section, which features the very picturesque pools accessed along the Road to Hana. When we visited (quite a few years ago), the Road to Hana was a tad undeveloped and rental car companies would not allow you to drive their cars there. Funnily enough, the only cars you’d meet on the Road to Hana were rental cars …

40. ___ Speedwagon : REO
The REO Speed Wagon (note the space between “speed” and “wagon”) is the vehicle. REO Speedwagon is the American rock band.

I can’t tell you how many of Frank Capra’s movies are on my list of all-time favorites. He directed such classics as “It Happened One Night”, “Mr. Deeds Goes to Town”, “Lost Horizon”, “Mr. Smith Goes to Washington”, “Meet John Doe”, “Arsenic and Old Lace” and the holiday favorite “It’s a Wonderful Life”. Capra also did his bit during WWII, enlisting just a few days after Pearl Harbor was attacked. Given his great talent, and the fact that he enlisted at the relatively advanced age of 44, the US Army put him to work directing 11 documentary war films in the “Why We Fight” series, for which he was awarded the Distinguished Service Medal.

55. Cornerstone of the American legal system : DUE PROCESS
“Due process” calls for the state to respect the legal rights of the individual. The concept was first articulated in the historic English charter known as the Magna Carta in 1215. Due process is incorporated into the US Constitution, although the words “law of the land” are used instead of “due process”, but with the same meaning.

63. Writer of sad poems : ELEGIST
An elegy is a mournful poem or funeral song, also known as a dirge. Perhaps the most famous elegy in the English language is that written by Thomas Gray, completed in 1750. His “Elegy Written in a Country Churchyard” is the source of many oft-quoted phrases, including:

Down
1. “Cop Killer” singer who went on to play a cop on TV : ICE-T
Rapper Ice-T must be sick of having his name come up as an answer in crossword puzzles. Maybe he should have stuck to his real name, Tracy Marrow. Then again, maybe not …

3. Alma mater for Bill and Hillary Clinton : YALE
President Bill Clinton was born not as a Clinton, but as William Jefferson Blythe. His father was killed in a car accident just three months before he was born. His mother remarried a few years later, to Roger Clinton. Bill didn’t formally adopt the Clinton name until he was fourteen years old, although he used it as he was growing up.

When Hillary Rodham Clinton was appointed US Secretary of State, she became the first former First Lady to serve in a president’s cabinet. Hillary met her husband, President Bill Clinton, when the two were studying at Yale law school.

4. Golfer’s assistant : CADDIE
“Caddie” is a Scottish word, as one might expect given the history of the game of golf. “Caddie” is a local word derived from the French “cadet”, meaning a younger son or brother, and also a student officer in the military.

5. They divide Europe and Asia : URALS
The eastern side of the Ural Mountains in Russia is generally regarded as the natural divide between the continents of Europe and Asia.

8. Caesar of comedy : SID
Sid Caesar achieved fame in the fifties on TV’s “Your Show of Shows”, but to be honest, I know him mainly from the fun film version of “Grease” in which he played Coach Calhoun.

11. Al of “Today” : ROKER
Al Roker is best known as the meteorologist on the “Today” show on NBC. He has successfully branched out from that platform though, and even co-wrote a novel called “The Morning Show Murders”, about a celebrity chef and TV host who get entangled in mystery. Topical stuff …

13. St. ___ fire : ELMO’S
St. Elmo is the patron saint of sailors. He lends his name to the electrostatic weather phenomenon (often seen at sea) known as St. Elmo’s fire. The “fire” is actually a plasma discharge caused by air ionizing at the end of a pointed object (like the mast of a ship), often observed during electrical storms.

21. TV award : EMMY
The Emmy Awards are the television equivalent of the Oscars in the world of film, the Grammy Awards in music and the Tony Awards for the stage. Emmy Awards are presented throughout the year, depending on the sector of television being honored. The most famous of these ceremonies are the Primetime Emmy Awards and the Daytime Emmy Awards. The distinctive name of “Emmy” is a softened version of the word “immy”, the nickname given to the video camera tubes found in old television cameras.

24. Social class : CASTE
Many creatures organize themselves into a social structure, a phenomenon known as “eusociality”. Examples of such creatures would be ants, bees and wasps, where there are queens, workers and soldiers. The groups within such a hierarchical structure are known as castes. The word “caste” was borrowed from the class divisions in Indian society (although the word and concept was actually introduced by the Portuguese).

28. ___ of Man : ISLE
The Isle of Man is a large island located in the middle of the Irish Sea between Great Britain and Ireland. I used to spend a lot of time there in my youth, and a very interesting place it is indeed. The Isle of Man is classed as a British Crown Dependency and isn’t part of the United Kingdom at all. It is self-governing and has its own parliament called the Tynwald. The Tynwald was created in AD 979 and is arguably the oldest continuously-running parliament in the world. The inhabitants of the island speak English, although they do have their own language as well called Manx that is very similar to Irish Gaeilge and Scottish Gaelic. And then there are those Manx cats, the ones without any tails. I’ve seen lots of them, and can attest that they are indeed found all over the island.

31. Some expensive dresses : DIORS
Christian Dior was a French fashion designer. As WWII approached, Dior was called up by the French military, drawing a temporary halt to his career in fashion. He left the army in 1942 and for the duration of the war designed clothes for wives of Nazi officers and French collaborators. After the war his designs became so popular that he helped reestablish Paris as the fashion center of the world.

42. U2 guitarist : THE EDGE
The Edge is the stage name of U2 band member David Evans.

44. Pear type : BOSC
Bosc is a cultivar of the European Pear grown in the northwest of the United States. The Bosc is that pear with a skin the color of a potato, with a long neck. I always seem to use the potato as my point of reference. How Irish am I …?

48. Punishment for Napoleon : EXILE
Napoleon was sent into exile twice. A coalition of European powers sent him to the island of Elba in Tuscany in 1814, only for him to escape after a year and return to power. After Wellington defeated him at Waterloo, Napoleon was dispatched to the British-owned island of St. Helena in the South Atlantic where he spent the last six years of his life.

51. Madrid’s ___ Sofia Museum : REINA
The Sofia in Madrid is Spain’s national museum of 20th century art. It is named for the current queen of Spain, the wife of King Juan Carlos I. The museum’s collection includes works by Pablo Picasso and Salvador Dali, the most famous of Spain’s 20th century masters. The most celebrated painting in the Sofia is Picasso’s “Guernica”.

52. Noted talk show retiree of 2011 : OPRAH
What can you say about Oprah? Born into poverty to a single mother, and with a harrowing childhood, Oprah is now the greatest African American philanthropist the world has ever known. Oprah’s name was originally meant to be “Orpah” after the Biblical character in the Book of Ruth, and that’s how it appears on her birth certificate. Apparently folks had trouble pronouncing “Orpah”, so she’s now “Oprah”.

55. Mar.-to-Nov. hours : DST
On the other side of the Atlantic, Daylight Saving Time (DST) is known as “summer time”. The idea behind summer/daylight-savings is to move clocks forward an hour in spring and backwards in the fall so that afternoons have more daylight.