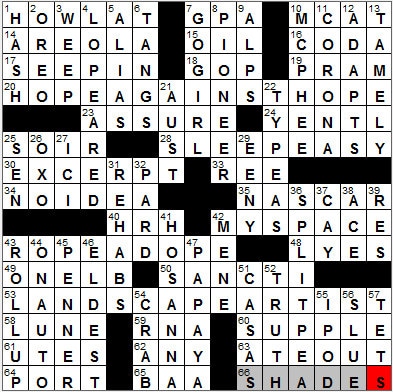 CROSSWORD SETTER: Julian Lim
THEME: SPLIT PEA … all of the theme answers are multiple words, the letters PEA being shared between the end of one word and the start of the next:

14. Colored part of the iris : AREOLA
The word areola comes from Latin, meaning “small open space”, and is a diminutive of the Latin word “area”, meaning “open space”.

16. Final measures? : CODA
In music, a coda is primarily a passage that brings a movement to a conclusion. “Coda” is Italian for “tail”.

17. Enter via osmosis : SEEP IN
Osmosis is the movement of a solvent (often just water) across a semi-permeable membrane. The solvent tends to flow from an area of less concentration to an area of higher concentration.

19. Baby buggy, to Brits : PRAM
Another word used in the UK that’s rarely used over here is “pram”, which in my day was the most common term for what is/was called a baby carriage in the US. “Pram” is short for “perambulator”.

24. 1983 Barbra Streisand musical drama : YENTL
“Yentl” is a play that opened in New York City in 1975. The move to adapt the play for the big screen was led by Barbara Streisand, and indeed she wrote the first outline of a musical version herself as far back as 1968. The film was eventually made and released in 1983, with Streisand performing the lead role.

25. Evening for Yves : SOIR
“Soir” is the French word for “evening” and a “soirée” is an “evening party”. The French “soirée” has an acute accent over the first “e”, but we tend to drop this when using the word in English.

Riddle-me riddle-me riddle-me-ree,
Perhaps you can tell what this riddle may be:
As deep as a house, as round as a cup,
And all the king’s horses can’t draw it up.
And the answer is … a well!

35. Org. with the Sprint Cup Series : NASCAR
NASCAR stands for the National Association for Stock Car Auto Racing. NASCAR is very, very popular and commands the second largest television audience of any professional sport in America, second only to football.

42. Facebook competitor : MYSPACE
From 2005 to 2008, Myspace was the most popular social networking site in the world, getting even more hits than the Google website for a while in 2006. But, the site’s popularity is declining, as it loses market share to Facebook. In 2011 Myspace was sold to Specific Media, with singer Justin Timberlake taking a major ownership share in the company.

43. *Muhammad Ali ring tactic : RO(PE-A)-DOPE
The Rumble in the Jungle was that celebrated fight between Muhammad Ali and George Foreman that took place in Zaire (now the Democratic Republic of the Congo). The fight was set in Zaire because of financial arrangements between promoter Don King and Zaire’s President Mobuto Seko. Ali coined the term “Rope-a-dope” to describe his incredibly successful strategy in the contest. From the second round onwards, Ali adopted a protected stance on the ropes letting Foreman pound him with blows to the body and head, with Ali using his arms to dissipate the power of the punches. He kept this up until the eighth round and then opened up and downed the exhausted Foreman with a left-right combination. I hate boxing but I have to say, that was an fascinating fight.

48. Caustic cleansers : LYES
When we purchase what is labelled as “lye” today, it is caustic soda (sodium hydroxide). To clean out drains we might buy Crystal Drano which is sodium hydroxide (lye) mixed with sodium nitrate, sodium chloride (table salt) and aluminum. The contents of Drano work in concert to clear the clog. The lye reacts with any fats creating soap which may be enough to break up the clog. Also, the finely divided aluminum reacts with water creating tremendous heat so that that mixture boils and churns, then any hair or fibers are cut by the sharp edges of the nitrate and chloride crystals. Having said all that, I find that boiling water poured down the drain almost always does the job …

49. .454 kg. : ONE LB
The unit of mass that we know today as a “pound” is descended from the old Roman unit of weight known as a “libra”. That “libra” connection is why we abbreviate pound to “lb”. The name “pound” though comes from the Latin “pondo” meaning “weight”.

53. *John Constable or Camille Pissarro : LANDSCA(PE A)RTIST
John Constable is the most English of painters, although during his lifetime his work was more popular in France than it was in his native country. His most famous painting is “The Hay Wain” from 1821, which you can see in the National Gallery in London.

Camille Pissarro was a French artist, noted for working in both the Impressionist and Post-Impressionist styles. As such, he is sometimes considered as a “father figure” for many of the famous Impressionist painters that admired him, including Paul Cézanne, Vincent van Gogh and Paul Gaugin.

61. Indians who gave their name to a state : UTES
The Ute are a group of American Indian tribes that now reside in Utah and Colorado. The Ute were not a unified people as such, but rather a loose association of nomadic groups.

Down
2. Modern ice cream flavor : OREO
The Oreo was the biggest selling cookie in the 20th century, and almost 500 billion of them have been produced since they were introduced in 1912 by Nabisco. In those early days the creme filling was made with pork fat, but today vegetable oils are used instead. If you take a bite out of an Oreo sold outside of America you might notice a difference from the homegrown cookie, as coconut oil is added to give a different taste.

4. *Like some bunnies and puppies : LO(P-EA)RED
A creature that is “lop-eared” has bent or drooping ears.

8. Davy Crockett, e.g. : PIONEER
The pioneer Davy Crockett is often referred to as “King of the Wild Frontier”. Crockett was from East Tennessee. After serving in the local militia he entered politics and represented his state in the US House of Representatives from 1827 to 1831. He disapproved of many of the policies of President Andrew Jackson, which led to his defeat in the 1834 election for the House. The defeat prompted Crockett to leave Tennessee for Texas. Famously, he died there in 1836 at the Battle of the Alamo.

22. “Go, go, go” sorts : TYPE AS
The Type A and Type B personality theory originated in the fifties. Back then, individuals were labelled as Type A in order to emphasize a perceived increased risk of heart disease. Type A personality types are so called “stress junkies”, whereas Type B types are relaxed and laid back. But, there doesn’t seem to be much scientific evidence to support the linkage between the Type A personality and heart problems.

26. Kitchen gadget brand : OXO
The OXO line of kitchen utensils is designed to be ergonomically superior to the average kitchen tool. The intended user of OXO products is someone who doesn’t have the normal range of motion or strength in the hands e.g. someone suffering from arthritis.

Victor Hugo was a French poet and playwright, known in his native country mainly for his poetry. However, outside of France he is perhaps more closely associated with his novels, such as “Les Misérables” and “The Hunchback of Notre-Dame”.

29. Start of a playground rhyme : EENY

36. Kind of soup … or a hint to the answers to the five starred clues : SPLIT PEA
When peas are dried, the skin can be removed and the seed naturally “splits” into two pieces called cotyledons. These cotyledons would have formed the first two leaves of the pea plant had it been allowed to germinate.

37. Many an island in the Bahamas : CAY
A “key” (also “cay”) is a low island offshore, as in the Florida Keys for example. Our term in English comes from the Spanish “cayo” meaning “shoal, reef”.

The Bahamas is a group of islands in the Atlantic Ocean, lying in the same island chain as Cuba and Hispaniola. The Bahamas was a British colony for many years but became independent in 1973, although it retains membership in the British Commonwealth.

38. Good card in blackjack : ACE
The game of “twenty-one” was first referred to in a book by Cervantes, the author famous for writing “Don Quixote”. He called the game “ventiuna” (Spanish for “twenty-one”). Cervantes wrote his story just after the year 1600, so the game has been around at least since then. Twenty-one came to the US but it wasn’t all that popular so bonus payments were introduced to create more interest. One of the more attractive bonuses was a ten-to-one payout to a player who was dealt an ace of spades and a black jack. This bonus led to the game adopting the moniker “Blackjack”.

39. ___ ipsa loquitur : RES
The literal translation of the legal term “res ipsa loquitur” is “the thing speaks for itself”. It refers to situations when there is an injury, and the nature of the injury is such that one can assume that negligence had to have taken place.

41. Christian word of exultation : HOSANNA
“Hosanna” is derived from Hebrew, probably from the term “hoshi’ah-nna” meaning “save, we pray”.

42. Word on a biblical wall : MENE
In the Book of Daniel, there is the story of the words “Mene, Mene, Tekel u-Pharson” being written mysteriously on the walls of the royal place. This story is the origin of the phrase “the writing’s on the wall”.

51. Homes, to José : CASAS
A house (casa) is a residence (residencia) in Spanish speaking locales.

52. “The ___ is out there” (catchphrase on “The X-Files”) : TRUTH
“The X-Files” is a very successful science fiction show that aired on the Fox network from 1993 to 2002. The stars of the show are David Duchovney (playing Fox Mulder) and the very talented Gillian Anderson (playing Dana Scully). By the time the series ended, it was the longest running sci-fi show in US broadcast history.

55. Destination for many a music download : IPOD
The iPod is Apple’s signature line of portable media players. It first hit the market in 2001 in the form of a hard drive-based device now known as the iPod Classic. Later models all use flash memory, allowing a smaller form factor.

57. Holidays in Hanoi : TETS
The full name for the New Year holiday in Vietnam is Tet Nguyen Dan, meaning “Feast of the First Morning”. Tet usually falls on the same day as Chinese New Year.