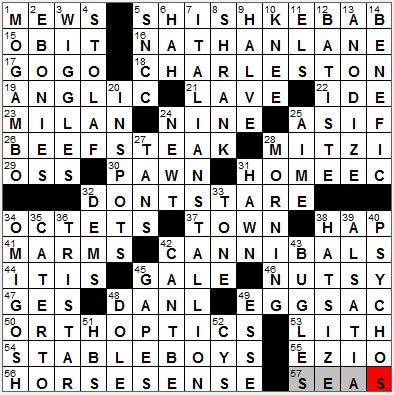 
Today’s Wiki-est, Amazonian Googlies
5. Bazaar dish : SHISH KEBAB
The name “kebab” covers a wide variety of meat dishes that originated in Persia. In the West, we usually use “kebab” when talking about shish kebab, which is meat (often lamb) served on a skewer.

15. End notes? : OBIT
“Obituary” comes from the Latin “obituaris”, originally the word for the record of a death of a person, although the literal meaning is “pertaining to death”.

16. “The Birdcage” drag queen player : NATHAN LANE
Nathan Lane is a wonderful actor, perhaps most associated with musical theater. Famous roles include Albert in “The Birdcage” and Max in “The Producers”.

“The Birdcage” is a very entertaining movie from 1996, an English-language adaptation of the Franco-Italian film “La Cage aux Folles”. The movie has an exceptionally strong cast that includes Robin Williams, Nathan Lane, Gene Hackman and Hank Azaria.

17. Kind of boots popular in the ’60s : GO-GO
The original go-go boot from the sixties comes to the knee and has a low heel. Prior to the sixties, boots really weren’t worn much by women other than as protection against bad weather. Now they are a fashion statement.

18. State capital with Yeager Airport : CHARLESTON
The local airport for Charleston, West Virginia opened in 1947 as Kanawaha Airport. The name was changed to Yeager Airport in 1985, to honor the famed test pilot, Chuck Yeager, who was born nearby.

19. Old English : ANGLIC
The Old English language is usually referred to as Anglo-Saxon, but I guess it can also be called Anglic.

22. Chemical ending : -IDE
In chemistry, when a metal combines with a non-metal, the non-metal is often given the suffix -ide as in iron sulfide, for example.

23. Prospero’s dukedom : MILAN
William Shakespeare’s “The Tempest” tells the story of Prospero, who was removed from the throne of Milan and banished to a deserted island along with his daughter, Miranda. Prospero learns sorcery on the island, and eventually conjures up a tempest that drives those who usurped his throne onto the shores of the island (in particular his own brother, Antonio).

24. West Coast ZIP starter : NINE
ZIP codes were introduced in 1963. The acronym ZIP stands for Zone Improvement Plan, a name indicating that mail travels more efficiently when the codes are included in the postal address.

28. Actress Gaynor : MITZI
Mitzi Gaynor’s most famous role has to be Ensign Nellie Forbush in the movie adaptation of the musical “South Pacific”. It is Gaynor that sings the song “I’m Gonna Wash That Man Right Outta My Hair”.

29. “Cloak and Dagger” org. : OSS
The Office of Strategic Services (OSS) was formed during WWII in order to carry out espionage behind enemy lines. A few years after the end of the war the OSS functions were taken up by a new group, the Central Intelligence Agency, chartered by the National Security Act of 1947.

30. Least powerful member of the board? : PAWN
It is believed that the game of chess originated in northwest India, evolving from a 6th-century game called “caturanga”, a Sanskrit word meaning “four divisions”. These four (military) divisions were represented in the game:

37. Hamlet’s cousin : TOWN
A hamlet is a small village, especially one without a church apparently.

38. Luck, old-style : HAP
Our word “hap” means chance or fortune. It turns up combined in words like “haphazard” and even “happen”. “Happen” originally meant to “occur by hap, by chance”.

41. Quaint ladies with buns, often : MARMS
“Marm” is short for “schoolmarm”, a quaint term for a female teacher.

42. Ones who may get you into hot water? : CANNIBALS
The term “cannibalism” was first coined by the Spanish, working from the name of the Carib people of the Lesser Antilles. The Spanish explorers of the Caribbean believed that the Carib people ate human flesh for food, but apparently this was untrue (although there was a war ritual that involved some chewing of an enemy’s flesh). The practice has been noted throughout history, in many parts of the world. In fact, Fiji in the South Pacific was once known as “Cannibal Isles”.

47. Some washers and dryers : GES
GE still makes an awful lot of household appliances. The division of GE that is responsible for the business is headquartered in Louisville, Kentucky … in Appliance Park. The park covers about 1,000 acres and even has its own ZIP code.

48. Twain’s “celebrated” frog : DAN’L
“The Celebrated Jumping Frog of Calaveras County” is a short story by Mark Twain, first published in 1865. It was this publication that launched Twain’s career as a writer as it brought him national attention. The title character is a frog that’s given the name “Dan’l Webster”.

49. Thing spun by a spider : EGG SAC
Female spiders lay thousands of eggs at one time in an egg sac that make from the silk that they spin. The egg sac can be carried by the mother, or perhaps attached to her web.

50. Field of vision? : ORTHOPTICS
Orhoptics deals with the treatment of poor eye movement and coordination.

55. Opera star Pinza : EZIO
Ezio Pinza was an opera singer from Italy. He performed for many years with the Metropolitan Opera in New York before retiring from the Met in 1948. He then launched a career on Broadway and in Hollywood.

Down
1. 1953 film classic with a Swahili title : MOGAMBO
Ava Gardner starred with Clark Gable in the African Safari movie “Mogambo”, released in 1953.

3. Emulates a hula dancer : WIGGLES
Hula is the name of the Polynesian dance. The chant or song that the dance illustrates, that’s known as the mele.

5. Grp. organizing ’60s sit-ins : SNCC
The Student Nonviolent Coordinating Committee (SNCC) was an organization that was very active in the Civil Rights Movement of the sixties. Apart from organizing protest events, the SNCC did a lot of work driving voter registration throughout the southern states.

7. Master of Disaster’s ring rival : ITALIAN STALLION
In the “Rocky” series of films, Rocky Balboa was given the ringname “The Italian Stallion”. His first real opponent was Apollo Creed, known in the ring as “The Master of Disaster”.

12. Fine, soft, sheer fabric : BATISTE
Batiste is an extremely soft and lightweight fabric, made of cotton, wool or polyester.

13. Coat by electrolytic action : ANODIZE
Anodizing is an electrolytic technique used to thicken the naturally existing oxide layer on a piece of metal. The layer is grown by passing a current through the metal in an electrolytic solution. The metal acts as an anode in the circuit, hence the name of the technique.

Sir Bedevere: What makes you think she’s a witch?
Peasant 3: Well, she turned me into a newt!
Sir Bedevere: A newt?
Peasant 3: [meekly after a long pause] … I got better.
Crowd: [shouts] Burn her anyway!

31. Best Supporting Actress for “Cactus Flower” : HAWN
I remember watching the ditsy Goldie Hawn character on “Rowan & Martin’s Laugh-In”. It was a great performance, convincing everyone that she was the stereotypical dumb blonde. Well, what a career she carved out for herself!

“Cactus Flower” is a farce written for the stage that played on Broadway for many years before being adapted for the silver screen and released in 1969. The play by Abe Burrows was itself based on a French play with the same name, just in French: “Fleur de cactus”. The movie has a great cast, led by Walter Matthau, Ingrid Bergman and Goldie Hawn. Hawn won an Oscar for her performance.

33. Cosmetology concern : TONE
Cosmetology is the art of using cosmetics. Not my forte …

35. Mollycoddle : CATER TO
Back in the mid-1700s, a “mollycoddle” was an insult, used to imply that a man was weak and effeminate.

36. Studio with a Pegasus logo : TRISTAR
TriStar is a subsidiary of Columbia Pictures, founded in 1982 as Nova Pictures. The company logo features Pegasus, the winged horse.

38. Bowler’s number : HAT SIZE
I think a bowler hat is called a derby here in the US. It was first produced in 1849 in London by hatmakers Thomas and William Bowler, hence the name. The alternative name of “derby” comes from the tradition of wearing bowler hats at the Derby horse race (a major race held annually in England).

39. Ancient French region : ALSATIA
Alsatia is the Latin name for the region in France known as Alsace. Alsace is home to Strasbourg, a beautiful city that I had the privilege to visit some years ago. Strasbourg is home to many international organizations, including the European Court of Human Rights.

48. James who was known as the Pineapple King : DOLE
James Dole lent his name to today’s Dole Food Company. James Dole was known as the Pineapple King, as he developed the pineapple industry in Hawaii and founded the Hawaiian Pineapple Company, the forerunner to the Dole Food Company. Dole might have had some help on the way, as he was cousin to Sanford B, Dole, President of the Republic of Hawaii from 1894 to 1900.

52. Composer Coleman and others : CYS
Cy Coleman was a composer and jazz pianist.