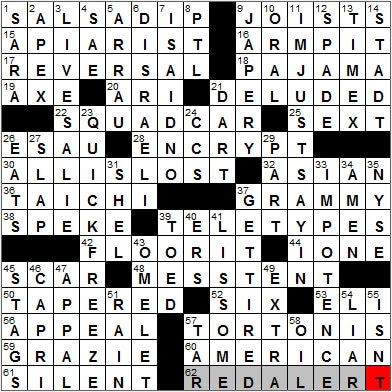 9. Building supports : JOISTS
In a building, a joist is a supporting member running horizontally to support a ceiling or floor.

15. One who works with combs : APIARIST
An apiary is an area where bees are kept. The Latin word for “bee” is “apis”.

16. Secret target : ARMPIT
Secret is an antiperspirant/deodorant made by Proctor & Gamble, first introduced in 1956 as a cream that was applied with the fingers (ick!). There followed a roll-on version in 1958, a spray in 1964 and the solid stick in 1978.

18. Kind of pants : PAJAMA
Our word “pajamas” comes to us from the Indian subcontinent, where “pai jamahs” were loose fitting pants tied at the waist and worn at night by locals and ultimately by the Europeans living there. And “pajamas” is another of those words that I had to learn to spell differently when I came to America. In the British Isles the spelling is “pyjamas”.

25. Have a heated phone exchange? : SEXT
“Sexting” (a portmanteau of “sex” and “texting”) is the sending of explicit dialog and images between cell phones. The term “sexting” was first coined by the UK’s “Sunday Telegraph Magazine” in a 2005 article. Apparently the practice is “rampant” among teens and young adults. Whatever happened to dinner and a movie …?

26. Old Testament outdoorsman : ESAU
Esau was the twin brother of Jacob, the founder of the Israelites. When their mother, Rebekah, gave birth to the twins “the first emerged red and hairy all over (Esau), with his heel grasped by the hand of the second to come out (Jacob)”. As Esau was the first born, he was entitled to inherit his father’s wealth (it was his “birthright”). Instead, Esau sold his birthright to Jacob for the price of a “mess of pottage” (a meal of lentils).

32. With 60-Across, Michelle Kwan or Michelle Wie : ASIAN
(60. See 32-Across : AMERICAN)
Michelle Kwan is perhaps the most successful American figure skater in history.

Michelle Wie is an American golfer on the LPGA Tour. She began playing golf at the age of four and was the youngest player ever to qualify for an LPGA tour event. Wie turned pro just before her 16th birthday …

37. Record achievement : GRAMMY
The first Grammy Awards Ceremony was held in 1959 and focused on recognizing outstanding achievement in the recording industry. The idea of a Grammy Award came up when recording executives were working on the Hollywood Walk of Fame project in the fifties. These executives concluded that there were many people in the recording industry deserving of accolades but who would probably never make it to the Walk of Fame. As a result, they founded the National Academy of Recording Arts and Sciences. The Academy considered naming the award the “Eddies” after Thomas Edison, but then opted for “Grammy” after Edison’s invention, the gramophone.

38. John ___, English explorer who named Lake Victoria : SPEKE
John Hanning Speke was an explorer and an officer in the British Indian Army. Speke was the first European to visit Lake Victoria, and so found the source of the River Nile.

39. Fax forerunners : TELETYPES
TTY is an acronym for a teletype writer, a device that is used at either end of a telephone line when one or both conversing parties is deaf. The teletype writer passes written messages to and fro between each of the terminals.

Edward Bulwer-Lytton was an English politician and writer. Among his writings, he came up with some phrases that have endured, such as:

53. TV title lawyer Stone : ELI
“Eli Stone” was a comedy drama on ABC that ran for a year and a half, finishing up in 2009. Eli Stone was played by Jonny Lee Miller. Miller is English actor, an ex-husband of Anglina Jolie. I saw him recently play Mr. Knightly in the latest BBC adaptation of Jane Austen’s “Emma”, the best version of “Emma” that I have seen (and I think I’ve seen them all!).

57. Rum-flavored desserts : TORTONIS
Biscuit Tortini is an ice cream dessert made with eggs and heavy cream and usually enhanced with a couple of teaspoons of rum. “Tortoni” was apparently an 18th century owner of an Italian café in Paris.

59. “Prego” preceder : GRAZIE
“Prego” literally means “I pray” in Italian, but it is usually translated into English as “you’re welcome” when it is used in response to a “thank you” (“grazie”, in Italian).

Down
1. Actress Rue of “Rules of Engagement” : SARA
The actress Sara Rue is best known for roles in the TV shows “Popular” and “Less Then Perfect”. Rue is also a spokesperson for Jenny Craig that we see in television commercials every so often.

5. Pianist Claudio : ARRAU
Claudio Arrau was a greatly respected Chilean pianist who performed for much of the twentieth century until his death in 1991. He left Chile to study in Germany where he lived for many years, having married a German opera singer. During WWII, Arrau and his family left Germany and settled in the US and lived out his days in New York City.

6. Powerful friend of Queen Victoria : DISRAELI
Benjamin Disraeli was the Prime Minister of Britain for a few months in 1868 and again from 1874 to 1880. Disraeli enjoyed a particularly warm relationship with Queen Victoria, partly because they both shared an intense dislike for Disraeli’s political rival, William Gladstone.

8. Scandalous 1980s inits. : PTL
“The PTL Club” was a daily television show hosted by TV evangelists Jim and Tammy Faye Bakker. PTL is short for both “Praise the Lord” and “People that Love”. The show ended its run of over ten years in 1987 when it was revealed that Jim Bakker was involvement in financial and sexual scandals. Bakker served 5 years in jail, part of an 18-year sentence.

13. Durable ticker? : TIMEX
The Timex Group, the manufacturer of watches, evolved from the Waterbury Clock Company that was founded in 1854 in Waterbury, Connecticut. The company achieved tremendous success in the early sixties largely due to an innovative marketing campaign. Advertisements featured the memorable tagline “Timex – Takes a licking and keeps on ticking”. In 1962, one out of every three watches sold in the US was a Timex.

24. Mails a dupe : CCS
I wonder do the kids of today know that “cc” stands for carbon copy, and do they have any idea what a carbon copy was? Do you remember how messy carbon paper was to handle?

31. Author Silverstein : SHEL
Author Shel Silverstein had a varied career and did a lot more than write books. He was a poet, composer, cartoonist and screenwriter among other things. One of his successful children’s book is “The Giving Tree”, which was first published in 1964. It tells of a young boy who has a special relationship with a tree in a forest. The message of the book seems to be that the tree provides the little boy with everything he needs.

35. Where Loews is “L” : NYSE
The roots of the New York Stock Exchange (NYSE) go back to 1792 when a group of 24 stock brokers set up the New York Stock & Exchange Board. They did so in an agreement signed under a buttonwood tree outside 68 Wall Street. That document became known as the Buttonwood Agreement.

The Loews Corporation is a holding company with interests in varied industries. Loews has majority interest in the likes of CNA Financial Corporation, Loews Hotel and Diamond Offshore Drilling.

39. Drove diagonally : TOED
To toe is to drive in a nail diagonally with a hammer.

41. Easily bent : LISSOME
“Lissome” is such a lovely word, meaning easily bent and supple. It is a variation of “lithesome”.

46. Kind of pants : CAPRI
Capri pants were first made popular on the island of Capri, apparently. They were invented in Europe in 1948, but only became popular in the US in the sixties. Mary Tyler Moore often wore Capri pants on “The Dick Van Dyke Show” and to some extent she sparked a fashion trend. After a lull in the seventies and eighties there was a resurgence in sales after Uma Thurman wore them (and danced in them) in “Pulp Fiction”. Can’t stand them myself …

47. Dismay, in Dover : APPAL
You know, I’ve been living in America since 1983, and it’s only now that I discover that I’ve been spelling “appall” the wrong way. I learned the spelling “appal” back home in Ireland. I seem to be fighting a losing battle with this language difference!

54. One guilty of pseudologia : LIAR
“Pseudologia” is a term used by psychiatrists for “pathological lying”.