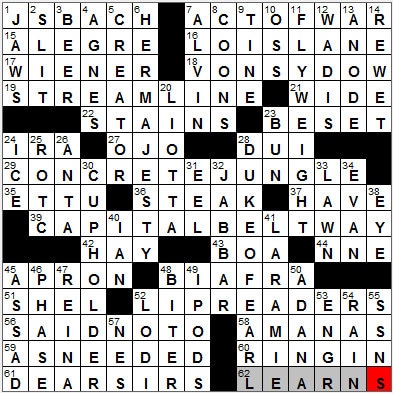 
Today’s Wiki-est, Amazonian Googlies
Across
1. Musical great whose grave went unmarked for nearly 150 years : JS BACH
Like so many of the great composers, the extent of Bach’s contribution to the repertoire wasn’t fully recognized until long after his passing. I think that Johann Sebastian Bach was the greatest composer of the Baroque period, and is ranked by many as the greatest classical composer of all time.

Johann Sebastian Bach died when he was 65-years-old, in 1750. He was buried in Old St. John’s Cemetery in Leipzig, and his grave went unmarked until 1894. At that time his coffin was located, removed and buried in a vault within the church. The church was destroyed in an Allied bombing raid during WWII, and so after the war the remains had to be recovered and taken to the Church of St. Thomas in Leipzig.

15. Pôrto ___, Brazil : ALEGRE
Porto Alegre is the capital of the state of Rio Grande do Sul in southern Brazil. The city was founded in 1772 by immigrants from the Azores, and later received a big influx of immigrants from Germany, Italy and Poland. Most of the residents of Porto Alegre today are descendants of those Europeans.

16. One whose crush was caped : LOIS LANE
Lois Lane has been the love interest of Superman/Clark Kent since the comic series was first published in 1938. Lois and Clark both work for the big newspaper in the city of Metropolis called “The Daily Planet”. The couple finally got hitched in the comics (and on television’s “Lois and Clark”) in 1996. But never mind all that … one has to wonder what the crossword is like in “The Daily Planet” …

17. Frank : WIENER
What we call a wiener in this country is known as a Vienna sausage in Germany. It was first produced by a butcher from Frankfurt who was living in Vienna, hence the name “Wiener”, German for “of Vienna”. Paradoxically, the same sausage is called a Frankfurter in Vienna, as it was created by someone from Frankfurt. It’s all very confusing …

18. Player of the evil Blofeld in “Never Say Never Again” : VON SYDOW
Max von Sydow is a Swedish actor, noted for his appearances in movies filmed in various European languages, everything from English and Norwegian to Danish and Spanish.

22. All targets : STAINS
All is a laundry detergent made by Sun Products from Wilton, Connecticut.

28. What a weaver may be guilty of, briefly : DUI
In some states, there is no longer a legal difference between a DWI (Driving While Intoxicated) and a DUI (Driving Under the Influence). Other states retain that difference, where by definition a DUI is a lesser offence than a DWI.

35. Words of betrayal : ET TU
It was Shakespeare who came up with the words “Et tu, Brute?” (And you, Brutus?), in his play “Julius Caesar” although the phrase was around long before he penned his drama. It’s not known what Julius Caesar actually said just before he was assassinated on the steps of the Senate in Rome.

36. Cheese ___ : STEAK
The cheesesteak sandwich was apparently introduced by Pat and Harry Olivieri and first sold in the thirties at their hot dog stand in South Philadelphia. Pat opened up his own restaurant with a menu centered on the popular sandwich, and you can go eat there to this day. It’s Pat’s King of Steaks, and my guess is everyone knows it in South Philly.

39. 495 : CAPITAL BELTWAY
The phrase “inside the Beltway” is used to refer to the infrastructure and politics of Washington, D.C. The Beltway in this case is Interstate 495, also known as the Capital Beltway.

43. One often seen in drag : BOA
The etymology of the term “drag”, as used in the transvestite world, seems to be unclear. It perhaps relates to the tendency of a transvestite’s skirts to drag along the ground in days of old (although why they just didn’t hitch up their skirts is beyond me!).

45. Stage part : APRON
The apron of a stage (if it has one) is that part which projects out into the audience.

48. One side in a 1960s civil war : BIAFRA
The Republic of Biafra was a Nigerian state that seceded in 1967 helping to spark a bloody civil war. Biafra agreed to a ceasefire just two-and-a-half years later and was reunited with Nigeria. That was after about a million civilians had died directly from the war and from terrible famine.

51. Record producer Talmy : SHEL
Shel Talmy was an American record producer who made a name for himself in the UK. In London he worked with the likes of The Who, The Kinks and Cat Stevens.

58. Some dishwashers : AMANAS
The Amana Corporation takes its name from the location of its original headquarters, in Middle Amana, Iowa.

7. All-Star Dark of the 1950s Giants : ALVIN
Alvin Dark is a retired shortstop and manager in Major League Baseball. He was named Rookie of the Year in 1948 while playing for the Boston Braves. Born in 1922, he is the oldest living manager of a post-season winning team.

8. Masked scavengers : COONS
The raccoon is native to North America. In captivity, raccoons can live to over 20 years of age, but in the wild they only live two or three years. The main causes for the shorter lifespan are hunting and road traffic.

10. “Inglourious Basterds” org. : OSS
The Office of Strategic Services (OSS) was formed during WWII in order to carry out espionage behind enemy lines. A few years after the end of the war the OSS functions were taken up by a new group, the Central Intelligence Agency, chartered by the National Security Act of 1947.

I tried hard to enjoy the 2009 movie “Inglourious Basterds“, but I find the violence in a Quentin Tarantino film so very hard to take. However, it got good reviews, so maybe you shouldn’t let me put you off.

11. Boxing class : FLYWEIGHT
Flyweight boxers weigh in at between 108 and 112 pounds.

12. Relatives of arroyos : WADIS
“Wadi” is an Arabic term referring to a valley, or perhaps a (mostly) dry riverbed. In English we might call this a wash, or in Spanish an “arroyo”.

13. Part of an ignitron : ANODE
An ignitron is a high-current rectifier, an apparatus for converting AC current into DC.

24. With 3-Down, Bud product : ICE
(3. See 24-Down : BEER)
Ice beer is a type of lager that has undergone a process called fractional freezing. This means that the beer has been chilled to the point that ice crystals form. The ice is frozen water, and can be filtered off. This lowers the water content in the beer, hence raising the concentration of alcohol.

25. Coll. elective : ROTC
The Reserve Officers’ Training Corps (ROTC) is a training program for officers based in colleges all around the US. The ROTC program was established in 1862 when as a condition of receiving a land-grant to create colleges, the federal government required that military tactics be a part of the new school’s curriculum.

26. Broadway acronym : ANTA
The American National Theater and Academy (ANTA) is a not-for-profit producer and training organization. It was set up in 1935 to be the official national theater of the United States, but today its main focus is the National Theater Conservatory at the Denver Center for the Performing Arts.

31. Shocker, perhaps : EEL
Electrophorus electricus is the biological name for the electric eel. Despite its name, the electric “eel” isn’t an eel at all, but rather what is called a knifefish, a fish with an elongated body and related to the catfish. The electric eel has three pairs of organs along its abdomen, each capable of generating an electric discharge. The shock can go as high as 500 volts with 1 ampere of current (that’s 500 watts), and that could perhaps kill a human.

41. North Platte feeder : LARAMIE
The Laramie River flows through Colorado and Wyoming, emptying into the North Platte River. The Laramie is named for the French-Canadian fur trader Jacques La Ramee. His companions gave it his name when he was found dead on the river in the 1820s, his bodied riddled with arrows.

45. Name of father-and-son world leaders : ASSAD
Dr. Bashar al-Assad is the current President of the Syrian Arab Republic, and is the son of the former President, Hafez al-Assad, whom he replaced in 2001. President Assad is a medical doctor, speaks fluent English and conversational French. Assad was studying ophthalmology in London when he met his wife, an Englishwoman.

47. Palacio resident : REINA
In Spanish, a queen (reina) lives in a place (palacio).

49. They may help people tune out conversations : IPODS
The iPod is Apple’s signature line of portable media players. It first hit the market in 2001 in the form of a hard drive-based device now known as the iPod Classic. Later models all use flash memory, allowing a smaller form factor.

50. Turkish city or province : ADANA
Adana is the fifth most populous city in Turkey.

52. California wine locale : LODI
Lodi, California may not be as well known a wine producer as Sonoma and Napa counties, but has been given the moniker “Zinfandel Capital of the World”.

55. ID theft targets : SSNS
The main purpose of a Social Security Number (SSN) is to track individuals for the purposes of taxation although, given its ubiquitous use, it is looking more and more like an “identity number” to me. The social security number system was introduced in 1936. Prior to 1986, an SSN was required only for persons with substantial income, so many children under 14 had no number assigned. There was concern that a lot of people were claiming children as dependents on their tax returns who did not exist, so from 1986 onwards it was a requirement to get a SSN for any dependents over the ago of 5. Sure enough, in the following year’s returns, seven million dependents “disappeared”.