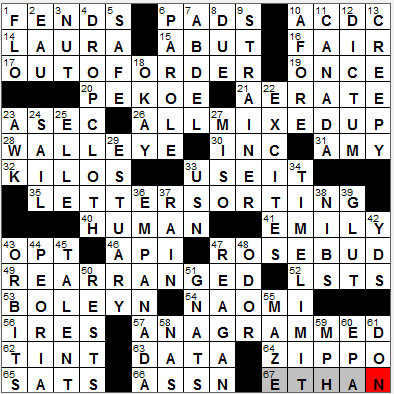 CROSSWORD SETTER: Patrick Merrell
THEME: LETTER SORTING … each of the theme answers is an anagram of its clue:


Today’s Wiki-est, Amazonian Googlies
Across
10. Kind of converter : AC/DC
If you have a laptop with an external power supply, then that big “block” is an AC/DC converter. It converts the AC current you get from a wall socket into the DC current that is used by the laptop.

14. Opinionated Dr. ___ : LAURA
According to Dr. Laura Schlessinger herself, her radio show “preaches, teaches, and nags about morals, values and ethics.”

16. Like a pro rata division, say : FAIR
“Pro rata” is a Latin phrase meaning “in proportion”.

28. Game fish in northern lakes and streams : WALLEYE
Walleye is freshwater fish native to Canada and the northern US. The walleye takes its name from its distinctive eyes. The eyes reflect light, rather like those of a cat, creating a phenomenon of “eyeshine”. The walleye’s eyes are well adapted for hunting for food in turbid waters, but makes them a more visible prey to anglers that hunt for them at nighttime.

30. Co. follower, sometimes : INC
When a company “incorporates”, one of the main advantages is that personal assets of the owners and officers are protected from any liability incurred by the company itself.

31. Girl’s name meaning “loved” : AMY
The name “Amy” is often an anglicized version of the French name “Aimée”, which translates to “loved”.

32. They’re not as heavy as stones : KILOS
We’ve used pounds and stones in Ireland for all my life. However, they no longer have any “official” status in the country, as we’ve made the conversion to the metric system. Having said that, many folks still tend to measure body weight in stones and pounds. One stone is equal to fourteen pounds.

52. D-Day refuges for the wounded, for short : LSTS
LST stands for Landing Ship, Tank. LSTs were the large vessels used mainly in WWII that had doors at either ends from which tanks and other vehicles could roll off and onto beaches. The design concept persists to this day in the huge fleet of commercial roll-on/roll-off ferries, all inspired by the LST.

53. House of Tudor woman : BOLEYN
Anne Boleyn was the second wife of Henry VIII of England. She was judged to be guilty of high treason after about a thousand days of marriage to Henry, accused of adultery and incest (probably trumped up charges). She was executed, but perhaps her legacy lived on in her only child, as she reigned for almost 45, very prosperous years as Queen Elizabeth I.

54. Watts of “21 Grams” : NAOMI
Naomi Watts was born in the UK and moved to Australia when she was 14 years of age. It was in Australia that she got her break in television and movies. Probably her most acclaimed role was in the 2003 film “21 Grams” with Sean Penn and Benicio del Toro. Watts is best friends with fellow Australian actress Nicole Kidman.

The 2003 movie called “21 Grams” takes its name from some pseudo-scientific work that was done by a Dr. Om McDougall in 1901. He weighed six patients in a TB hospital who were close to death, placing their beds on an industrial scale. His data showed that each patient lost an average of 21 grams at the moment of death, which he postulated was the weight loss as the soul left the human body. However, his results have never been reproduced.

64. Lighter choice : ZIPPO
The first Zippo lighter was made in 1933, in Bradford, Pennsylvania. The name “Zippo” was simply a word invented by the company founder, George Blaisdell, as he liked the word “zipper”. You can buy one today for $12.95, or if you want the solid gold model … for $8,675.95.

Today the standardized test for admission to colleges is known as the SAT Reasoning Test, but it used to be called the Scholastic Aptitude Test and Scholastic Assessment Test, which led to the acronym SAT.

67. A Coen brother : ETHAN
I think it’s great to see two brothers working together and being so successful. Joel and Ethan Coen are two movie producers and directors who both live in New York City. They do love the movie-making business, and even married “insiders”. Ethan’s wife is film editor Tricia Cooke, and Joel is married to one of my favorite actresses, the lovely Frances McDormand.

Down
1. Rapper ___ Rida : FLO
Rapper Tramar Dillard is better known as (but not by me!) rapper Flo Rida. As you might have guessed, Flo Rida was born in the state of Florida.

2. French word that sounds like a letter of the alphabet : EAU
“Eau” is the French word for “water”.

4. Painter’s appurtenance : DROP CLOTH
An appurtenance is an accessory, a piece of equipment for a specific task.

6. Release, in a way : PAROLE
The term “parole” is a French word that we use in English, with the French “parole” meaning “word, speech”. Of particular interest is the French phrase “parole d’honneur” which translates as “word of honor”. In the early 1600s we started using “parole” to mean a promise by a prisoner of war not to escape, as in the prisoner giving his “word of honor” not to run off. Over time, parole has come to mean conditional release of a prisoner before he or she has served the full term of a sentence.

7. Egypt’s Gamal ___ Nasser : ABDEL
Gamal Abdel Nasser was the second president of Egypt, from 1956 until he died in 1970. He stood alongside Muhammad Naguib, Egypt’s first president, during the Egyptian Revolution of 1952 that overthrew the ruling monarchy of Egypt and Sudan. Nasser was an advocate of Pan-Arabism, an ideology promoting unification of Arab peoples and countries. President Nasser went so far as forming the United Arab Republic (UAR), a union between Egypt and Syria that started in 1958, but fell apart in 1961 when Syria withdrew.

12. Authoritative pronouncement : DICTUM
“Dictum” is a legal term, describing a statement by a court as part of a judgment.

25. Magazine that serialized Simone de Beauvoir’s 1967 “La femme rompue” : ELLE
“Elle” magazine was founded in 1945 in France and today has the biggest circulation of any fashion magazine in the world. “Elle” is the French word for “she”.

Simone de Beauvoir was a French philosopher and writer. She wrote a treatise in 1949 called “The Second Sex” that discussed the oppression of women, which became an inspiration for the modern feminist movement. She is also known for the long-term relationship she had with fellow philosopher and writer Jean-Paul Sartre.

27. Sendai seasoning : MISO
Miso is the name of the seasoning that makes the soup. Basic miso seasoning is made by fermenting rice, barley and soybeans with salt and a fungus (!), to produce a paste. The paste can be added to stock to make miso soup, or perhaps to flavor tofu.

Sendai is a city in Japan that was badly damaged in the 9.0 earthquake of 2011 that caused such a devastating tsunami.

29. Chesapeake Bay, e.g. : ESTUARY
Chesapeake Bay is on the Atlantic coast and is surrounded by the states of Maryland and Virginia. It is the largest estuary in the whole country, with over 150 rivers and streams draining into it.

33. Seal’s grp. : USN
SEAL is an acronym used by the US Navy’s SEa, Air and Land teams. The SEALs were born out of the Navy’s special warfare groups from WWII, like the Underwater Demolition Teams and the Motor Torpedo Boat Squadrons. The Navy SEAL unit was established soon after President Kennedy’s speech in which he announced the plan to put a man on the moon, as in the same speech the president allocated $100m of funding to strengthen special operations forces. The Navy used some of this money to set up guerrilla and counter-guerrilla units, which soon became the SEALs.

36. Savory turnover from south of the border : EMPANADA
An empanada is a dish made by folding pastry around cooked meat and vegetables. To me it looks very similar to a dish I grew up with called a Cornish pasty.

38. Penpoints : NIBS
“Nib” is a Scottish variant of the Old English word “neb”, with both meaning the beak of a bird. This usage of “nib” as a beak dates back to the 14th century, with “nib” meaning the tip of a pen or quill coming a little later, in the early 1600s.

42. Two of these make a fathom: Abbr. : YDS
Our word “fathom” comes from the Old English word used to describe the length of the outstretched arms. Today a fathom is equal to six feet.

44. Average Town, U.S.A. : PEORIA
The phrase, “Will it play in Peoria?” is used to mean, “Will it appeal to the mainstream?” It is believed the expression originated as a corruption of, “We shall play in Peoria”, a line used by some actors in the 1890 novel “Five Hundred Dollars” by Horatio Alger, Jr.

47. The 40th since 1789 : REAGAN
Ronald Reagan started out his political career as a member of the Democratic Party, but switched to the Republicans in the early fifties. He served as Governor of California for eight years, and vied unsuccessfully for the nomination for US President on two occasions. He finally succeeded in 1980 and defeated President Jimmy Carter and became the 40th US President in 1981.

58. “Illmatic” rapper : NAS
Rapper Nas used to go by another stage name, Nasty Nas, and before that by his real name, Nasir bin Olu Dara Jones. He released “Illmatic”, his first album, in 1994. Not my cup of tea, I would say …

60. Cleanup org. : EPA
The Environmental Protection Agency (EPA) was set up during the Nixon administration, and began operation at the end of 1970.