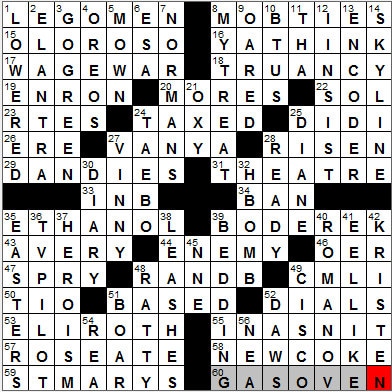 
Today’s Wiki-est, Amazonian Googlies
1. Ones really attached to their surroundings : LEGO MEN
Lego is manufactured by Lego Group, a privately held company headquartered in Billund, Denmark. The company was founded by a carpenter called Ole Kirk Christiansen in 1934, and the now-famous plastic interlocking blocks were introduced in 1949. They were originally sold under the name “Automatic Binding Bricks”, but I think today’s “Lego” is easier to remember! The name “Lego” comes from the Danish term “leg godt” meaning “play well”.

15. Wine whose name means “fragrant” : OLOROSO
“Oloroso” is the Spanish word for “scented, fragrant”. It is used to describe a sherry that is usually dark and nutty, characteristics brought on by oxidative aging.

18. Cutting crime? : TRUANCY
“Truant” is such a lovely word. We have been using it to describe someone who wanders from an appointed place (like someone Absent Without Leave from an Air Force Base) since the mid-1400s. Prior to that a truant was a beggar or a vagabond.

19. Company in 2002 headlines : ENRON
After all the trials following the exposure of fraud at Enron, several of the key players ended up in jail. Andrew Fastow was the Chief Financial Officer. He plea-bargained and received ten years without parole, and became the key witness in the trials of others. Even Fastow’s wife was involved, and was sentenced to one year for helping her husband hide money. Jeffrey Skilling (ex-CEO) was sentenced to 24 years and 4 months. Kenneth Lay (CEO) died in 2006 after he had been found guilty and before he could be sentenced. The accounting firm Arthur Andersen was found guilty of obstruction of justice for shredding thousands of pertinent documents and deleting emails and files (a decision that the Supreme Court later overturned on a technicality). But still, Arthur Andersen collapsed under the weight of the scandal and 85,000 people lost their jobs (despite only a handful being directly involved with Enron).

20. Practices : MORES
Mores are the accepted customs and practices of a particular group. “Mores” is the plural of the Latin word “mos” which means “custom”.

22. Step on the scale : SOL
The solfa syllables are: do, re, mi, fa, sol, la & ti. The solfa scale was developed from a six-note ascending scale created by Guido of Arezzo in the 11th century. He used the first verse of a Latin hymn to name the syllables of the scale:

The “ut” in this scale was later changed to “do”, as “do” is a more “open ended” sound, and “si” was added (the initials of “Sancte Iohannes”) to complete the seven-note scale. Later again, “si” was changed to “ti” so that each syllable began with a unique letter.

23. GPS calculations: Abbr. : RTES
GPS stands for Global Positioning System. The modern GPS system that we use today was built by the military who received the massive funding needed because of fears during the Cold War of the use of Intercontinental Ballistic Missiles. We civilians, all round the world, owe a lot to President Ronald Reagan because he directed the military to make GPS technology available to the public for the common good. He was moved to do so after the Soviet Union shot down KAL flight 007 carrying 269 people, just because it accidentally strayed into Soviet airspace.

25. “Rugrats” mom : DIDI
“Rugrats” is a cartoon show that aired on Nickelodeon.

27. Title relative in a classic Russian play : VANYA
Anton Chekhov’s play “Uncle Vanya” was published in 1897. It is not really an “original” work, in the sense that it is a reworking of a play he wrote and published a decade earlier called “The Wood Demon”.

33. Like Shostakovich’s Symphony No. 2 : IN B
Dmitri Shostakovich was Russian composer, producing works in the Soviet period. He had a difficult relationship with the Communist Party, twice being officially denounced.

35. The Model T was designed to run on it : ETHANOL
The Ford Model T was the first really affordable car that was offered for sale, and it was produced from 1908 to 1927. It was the Model T that ushered in the era of assembly line production, which greatly cut down the cost of manufacture. The engine was designed to run on petrol, kerosene or ethanol.

43. Fisher with an eponymous concert hall : AVERY
Avery Fisher was an audio engineer who made major contributions in the field of sound reproduction. He donated over $10 million to the New York Philharmonic in 1973, and since then the Lincoln Center facility used by the orchestra has been named Avery Fisher Hall.

48. Domino’s delivery? : R AND B
Fats Domino was born and raised in New Orleans, with Creole as his first language. He made into the big time in 1949 when he recorded an early rock and roll record called “The Fat Man”. That record sold over a million copies, the first rock and roll record to achieve that milestone.

49. Year Otto I became king of the Lombards : CMLI
Otto I the Great, ruled the Holy Roman Empire in the 10th century.

Toledo is a city in central Spain.

53. He played Sgt. Donny Donowitz in “Inglourious Basterds” : ELI ROTH
Eli Roth is one of a group of directors of horror movies known quite graphically as “The Splat Pack”. I can’t stand “splat” movies and avoid them as best I can. Roth is also famous for playing Donny Donowitz in the Quentin Tarantino movie “Inglourious Basterds”, a good film I thought, if you close your eyes during the gruesome bits.

57. Optimistic : ROSEATE
Something roseate is “rose colored”, like rose colored glass, and hence also refers to something that is optimistic, perhaps overly so.

Down
2. Civic or Corolla competitor : ELANTRA
The Elantra is a compact car made by Hyundai of South Korea.

4. They come in a Triple Double variety : OREOS
The Oreo cookie was the biggest seller in the 20th century, and almost 500 billion have been produced since they were introduced in 1912 by Nabisco. In those early days, the creme filling was made with pork fat, but today vegetable oils are used instead. If you take a bite out of an Oreo sold outside of America you might notice a difference from the homegrown cookie, as coconut oil is added to give a different taste.

7. 11th-century invaders : NORMANS
The Norman Conquest of England started in 1066 when William, Duke of Normandy defeated King Harold II of England at the Battle of Hastings. William was crowned King William I of England, and was of course known as William the Conqueror.

9. Like a trireme : OARED
Triremes were galleys used in the Mediterranean by a number of cultures, including the Ancient Greeks and Romans. The trireme was so called because there were three rows of oars on each side of the vessel. The term “trireme” comes from the Latin “tres remi” meaning “three-oar”.

10. Furnace meas. : BTUS
In the world of heating, ventilation and air conditioning, the power of a heating or cooling unit can be measured in British Thermal Units. This dated unit is basically the amount of energy required to heat a pound of water so that the water’s temperature increases by one degree Fahrenheit.

21. Moronic beginning? : OXY-
The word “oxymoron” is in itself an oxymoron, as it is derived from the Greek words “Oxys” and “moros” meaning “sharp” and “stupid”.

24. Cardio workout option : TAE BO
Tae Bo isn’t an ancient martial art, but was developed as a form of aerobic exercise in the 1990s. It was introduced by taekwondo expert Billy Blanks who gave it the name Tae Bo, a melding of taekwondo and boxing.

25. Actress Kruger of “Unknown” : DIANE
Diane Kruger is a German actress and former model. She played Helen of Sparta in the epic film “Troy”, released in 2004.

27. Cousin of film : VINNY
“My Cousin Vinny” is a really fun film from 1992 starring Joe Pesci and Marisa Tomei. Would you believe that in 2008, the American Bar Association rated “My Cousin Vinny” as the #3 Greatest Legal Movie of all time, after “To Kill a Mockingbird” and “12 Angry Man”.

30. Frank account : DIARY
Anne Frank has to be one of the most famous victims of the Holocaust. This is largely because the story of this young girl lives on in her widely published diary, and in adaptations of the diary for stage and screen. Anne Frank was a German until she lost her nationality in 1941 when the Nazis came to power. By this time, she was living with her family in Amsterdam, as the Franks chose to flee Germany in 1933. When the Germans occupied the Netherlands, the family went into hiding in the attic of Otto Frank’s office building (Otto was Anne’s father). There the family hid for two whole years, until they were betrayed. The family was split up, and Anne and her sister died from typhus in a concentration camp in 1945.

32. U.S.S.R.’s Big Ivan, e.g. : H-BOMB
There are two classes of nuclear weapons, both of which get the energy for the explosion from nuclear reactions. The first nuclear bombs developed, called atomic bombs (A-bombs), use fission reactions. Uranium nuclei are split into smaller nuclei with the release of an awful lot of energy in the process. The second class of nuclear weapons are fusion bombs. These devices are called thermonuclear weapons or hydrogen bombs (H-bombs). In a fusion reaction, the nuclei of hydrogen isotopes are fused together to form bigger nuclei, with the release of even greater amounts of energy.

“Big Ivan” is a nickname for most powerful nuclear weapon that has ever been detonated. It was exploded by the Soviet Union in a test in 1961, and yielded the equivalent of 50 megatons of TNT.

40. Nicholas II, e.g. : ROMANOV
The last ruler of Imperial Russia was Tsar Nicholas II. Famously, the Tsar and his family were murdered in the basement of a house in Yekaterinburg, Russia by members of the Bolshevik secret police in 1918. The Tsar’s youngest daughter was 16-year-old Anastasia, and although it is certain that she died with her family, rumors of her escape have persisted for years. The rumors grew with the help of numerous women who claimed to be Anastasia, but DNA testing has proven that all claims were false. In 2009, DNA testing finally proved that the remains of all of the Tsar’s immediate family have been found and identified.

49. “Welcome to the human network” sloganeer : CISCO
Cisco is a company that I really admire. Headquartered in San Jose, California, Cisco develops and sells products and services in the communications sector. The name “Cisco” was taken from the name of the city, San Francisco.

54. Actor Stephen : REA
Stephen Rea is an Irish actor, whose most famous role was that of the “retired” IRA man in the brilliant 1992 film “The Crying Game”. He also starred in the chilling movie “Stuck”, a 2007 film that is based on a true story about a woman who commits a hit and run on a homeless man. The woman leaves the scene of the crime with the victim still “stuck” in her windshield. The woman leaves the man to die in her garage. Chilling, eh? But as I said, a true story …

56. Granting grp. : NEA
The National Endowment for the Arts (NEA) is an agency funded by the federal government that offers support and financing for artistic projects. It was created by an Act of Congress in 1965. Between 1965 and 2008, the NEA awarded over $4 billion to the arts, with Congress authorizing around $170 million annually through the eighties and much of the nineties. That funding was cut to less than $100 million in the late nineties due to pressure from conservatives concerned about the use of funds, but it is now back over the $150 million mark.