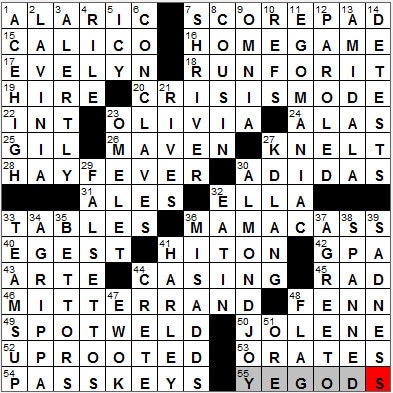 
Today’s Wiki-est, Amazonian Googlies
1. Visigoth king who sacked Rome : ALARIC
Alaric I was a Germanic leader, King of the Visigoths from 395-410 AD. Early in his life, Alaric served as a mercenary in the service of the Roman Empire, but such a career didn’t settle well with him. When he became King of the Visigoths, Alaric mounted a campaign to seek new kingdoms and was successful in invading Greece and Italy. His eventual sacking of Rome marked the end of the great Roman Empire.

15. Black, yellow and white, say : CALICO
Domestic cats with a white coat and patches of brown and black are called calico cats in this country. In Ireland, and the rest of the world I think, such cats are called tortoiseshell-and-white. “Calico” is not a breed of cat, simply a coloring.

17. Crabtree & ___, purveyor of skin care products : EVELYN
Crabtree & Evelyn is an American company that sells body and home products. It is owned by a Malaysian company, one that’s big into palm and rubber tree plantations.

23. Pig of children’s lit : OLIVIA
Olivia is a pig featured in a series of children’s books that is written and illustrated by Ian Falconer. The character was inspired by Falconer’s niece, also named Olivia.

25. “CSI” forensic scientist Grissom : GIL
I’m told that the TV show “CSI” gets a lot of razzing by law enforcement professionals for its unrealistic portrayal of the procedures and science of criminal investigation. I don’t care though, as I just think it’s fun television. The original “CSI” set in Las Vegas seems to have “gone off the boil”, but the addition of Sela Ward to the cast of “CSI: NY” has really, really raised the level of the sister show centered around New York City.

26. Yiddish for “connoisseur” : MAVEN
I’ve always loved the word “maven”, another word for an expert. Maven comes into English from the Yiddish “meyvn”, someone who appreciates and is a connoisseur.

30. Parent company of Reebok : ADIDAS
The brand name “Adidas” dates back to when Adolf “Adi” Dassler started making his own sports shoes in his mother’s laundry room in Bavaria after returning from WWI. With his brother, Adi founded Dassler shoes. The companies big break came in 1936 at the Berlin Olympics when Adi persuaded American sprinter Jesse Owens to use his shoes, and with the success of Jesse Owens came success for the fledgling shoe company. After WWII the brothers split, acrimoniously. Adi’s brother, Ru-dolf Da-ssler, formed “Ruda” shoes (later to become Puma), and Adi Das-sler formed “Adidas”.

32. Poet ___ Wheeler Wilcox : ELLA
Ella Wheeler Wilcox was an author and poet from Wisconsin. Her most famous poem is “Solitude”, noted for the oft-quoted line “Laugh, and the world laughs with you; Weep, and you weep alone.”

36. Pop singer born Ellen Naomi Cohen : MAMA CASS
Cass Elliot was one of the four singers in the Mamas and the Papas, the sensational group from the sixties. She was performing sold-out concerts in London in 1974 when she was found dead one morning, having had a heart attack. She was only 32 years old. Eerily, she died in the same flat (on loan from Harry Nilsson) in which the Who’s drummer, Keith Moon, would die just four years later.

46. Longest-serving French president : MITTERRAND
François Mitterrand was the 21st President of France, serving from 1981 to 1995. There was some controversy after his term ended, as it was revealed that for much of the time he was in office he suffered from prostate cancer and falsified his personal medical records to hide the fact from the public. He died from the disease just six months after he handed over the presidency to Jacques Chirac.

48. “Twin Peaks” actress Sherilyn : FENN
Sherilyn Fenn was the actress who played Audrey Horne on “Twin Peaks” in the nineties.

50. #1 Dolly Parton country hit with the lyric “I’m beggin’ of you, please don’t take my man” : JOLENE
I must admit that I am not a big fan of country music, but I do like the 1974 hit “Jolene” written and performed by Dolly Parton. Dolly Parton tells the story that the song was inspired by a red-headed bank teller who was frequently flirting with her husband.

Down
2. Second wife of Aeneas : LAVINIA
In Roman mythology, Lavinia was the last wife of Aeneas, the hero of Virgil’s epic poem, “The Aeneid”.

“The Aeneid” is Virgil’s epic poem that tells of the journey of Aeneas, a Trojan who traveled to Italy to become the ancestor of all Romans.

6. Private meetings : CONCLAVES
Our use of the word “conclave” as a private assembly comes from its original use with reference to the papal conclave, a meeting of the College of Cardinals to elect a new Pope.

7. McGovern’s 1972 running mate : SHRIVER
Sargent Shriver was the running mate of George McGovern, the Democratic nominee for US President in the 1972 race. Shriver was a member of the Kennedy clan, as he was married to Eunice Kennedy, sister to President John F. Kennedy.

8. “The Country ___” (1936 Oscar-winning Disney short) : COUSIN
“The Country Cousin” is a cartoon short film from RKO, released in 1936. The film was produced by Walt Disney, and won the Academy Award for Best Animated Short Film.

9. In ___ paratus : OMNIA
“In omnia paratus” is Latin for “ready for anything”. It serves as the motto of the 18th Infantry Regiment of the US Army.

12. Removed from the can? : PAROLED
The term “parole” is a French word that we use in English, with the French “parole” meaning “word, speech”. Of particular interest is the French phrase “parole d’honneur” which translates as “word of honor”. In the early 1600s we started using “parole” to mean a promise by a prisoner of war not to escape, as in the prisoner giving his “word of honor” not to run off. Over time, parole has come to mean conditional release of a prisoner before he or she has served the full term of a sentence.

13. Queen who becomes a senator in the “Star Wars” saga : AMIDALA
In the “Star Wars” universe, Padmé Amidala is the Queen of the planet Naboo. Played very ably by Natalie Portman, Padmé becomes the secret wife of Anakin Skywalker, later revealed to be Darth Vader. As such, Padmé is also the mother of Luke Skywalker and his sister, Princess Leia Organa.

21. Tears apart : RIVES
To rive is to tear apart, a word that we’ve been using since about 1300, from the Old Norse word “rifa”, also meaning to tear apart.

23. Egg foo yung, essentially : OMELET
Egg foo yung is a dish served in Chinese restaurants, and is basically an omelet. It probably takes its name from a flower called the Fu Yung.

27. 1992 Grammy winner for “Constant Craving” : KD LANG
k.d. lang is the stage name of Kathryn Dawn Lang, a Canadian singer and songwriter. Beyond her performing career, she is a noted activist focused on animal rights, gay rights, and human rights in Tibet.

30. Product once pitched with the line “Sometimes you feel like a nut” : ALMOND JOY
I think my favorite candy growing up was an Almond Joy (although in my part of the world it had a slightly different formulation and was called a Bounty Bar

34. Victorious fleet commander at Actium : AGRIPPA
The Battle of Actium was fought between the forces of Octavian, leader of the Roman Republic, and the combined forces of Mark Anthony and Cleopatra. The Emperor’s fleet was commanded by Marcus Vipsanius Agrippa. The victory helped to consolidate Octavian’s standing in Rome, and soon after he was given the title of Augustus, and became the first Roman Emperor.

41. Heavy cycle : HARLEY
The Harley-Davidson motorcycle company was started up in the very early 1900s by two childhood friends, William Harley and Arthur Davidson, . Their first design was in effect an engine hooked up to a pedal bicycle, but the 116 cc cylinder capacity simply couldn’t generate enough power to get up the hills of their native city of Milwaukee. The pair came up with a redesigned model that had a cylinder capacity of 405 cc, which the partners built in a shed at the back of Davidson’s house. In 1906 they built their first factory, located where the company’s headquarters is to this day, on Juneau Avenue in Milwaukee, Wisconsin.

44. El Greco’s birthplace : CRETE
“El Greco” (“the Greek”, in Spanish) was the nickname of the artist whose real name was Domenikos Theotokopoulos. El Greco was born in Crete in 1541, and moved to Venice to study art when he was in his early twenties. A few years later he moved to the city of Toledo in central Spain, where he lived and worked for the rest of his life.

47. Furry denizen of Endor : EWOK
The Ewoks are creatures that live on the moon of Endor, first appearing in “Star Wars Episode VI: Return of the Jedi”. They’re the cute and cuddly guys that look like teddy bears.

51. Sudbury Basin export : ORE
The Sudbuy Basin is a huge basin in Ontario, Canada, about 40 miles long and 20 miles wide. It was formed when a meteoroid crashed into the Earth almost two million years ago. As a result of the impact, the area is rich in mineral deposits.