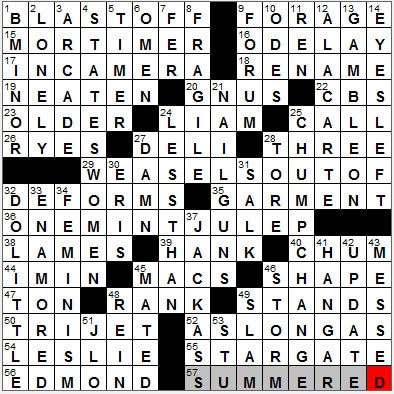 
Today’s Wiki-est, Amazonian Googlies
Across
15. ___ Brewster, beleaguered nephew in “Arsenic and Old Lace” : MORTIMER
I suppose that most famously “Arsenic and Old Lace” is a Frank Capra film, released in 1944. The movie was based on a 1939 stage play by Joseph Kesselring. The film stars Cary Grant as a completely madcap and frantic Mortimer Brewster. Grant was only the fourth choice for the role, after Bob Hope, Jack Benny and Ronald Reagan. That’s quite an eclectic mix of actors …

17. How some legal conversations are held : IN CAMERA
“In camera” is a legal term meaning “in private”. The literal translation from Latin is “in a chamber”.

20. African migrators : GNUS
A gnu is also known as a wildebeest, an antelope native to Africa. Wildebeest is actually the Dutch word for “wild beast”.

22. “The Amazing Race” network : CBS
I am not a huge fan of reality television, but I do watch “The Amazing Race” (usually while writing posts for this blog on my laptop!). I love to travel, and enjoy seeing the teams traverse the globe. The show’s host is Phil Keoghan. From his accent, I always thought that Keoghan was from the Boston area. He’s actually from New Zealand! Shows you how much I know about American accents …

24. Neeson of “Taken” : LIAM
“Taken” is a fabulous thriller movie released in 2008. It stars Liam Neeson as kind of an older James Bond type, and he is great in the role. I just heard the wonderful news that “Taken II” has started filming.

26. Some distillery products : RYES
For whiskey to be labelled “rye” in the US, it has to be distilled from at least 51% rye grain. In Canada however, a drink called rye whiskey sometimes contains no rye at all.

29. Dodges, as an obligation : WEASELS OUT OF
To weasel out of something is to back away from a prior commitment. The association of “weasels” with the concept of “not being trusted” might have arisen from the behavior in which a weasel sucks out the contents of an egg while leaving the shell virtually intact.

36. R&B “drinking song” covered by Ray Charles : ONE MINT JULEP
In the forties and fifties a lot of R&B composers came out with quite a few drinking songs. Included in the list were “One Scotch, One Bourbon”, “Fat Back and Corn Likker” and “One Mint Julep”.

Ray Charles came up with his stage name by dropping his family name from his real moniker, Ray Charles Robinson. Ray’s life was a wild ride, well represented in the excellent biopic called “Ray” released in 2004 and starring Jamie Foxx in the title role. Ray was married twice, and fathered 12 children with nine different women. As I said, a wild ride …

40. Buddyroo : CHUM
Our word “chum” is slang that originated in the universities of England in the late 1600s. “Chum” was originally written as “cham”, and was short for “chamber-mate”.

50. The DC-10 was one : TRIJET
The McDonnell Douglas DC-10 is a very recognizable passenger aircraft, with one engine under either wing and a third incorporated into the base of the vertical stabilizer at the rear of the plane.

54. “Gone With the Wind” actor Howard : LESLIE
English actor Leslie Howard‘s most famous role was Ashley Wilkes in the 1939 movie “Gone With the Wind”. Howard was very active in WWII, acting in and producing anti-Nazi propaganda films. Howard was on a commercial flight that was shot down in 1942 by Luftwaffe aircraft. Because of Howard’s significant role in the war effort, conspiracy theorists to this day believe that Howard was the sole target in the attack.

55. 1994 sci-fi film about an alien artifact : STARGATE
The “Stargate” movie, released in 1994, was a really fun film I thought. It turned into huge television, book and video game franchise, but nothing matched up to the original.

56. Controversial one-act play by Mamet : EDMOND
“Edmond” by David Mamet is a one-act play, but one that has 23 separate scenes. The dialogue features a lot of racial slurs, creating quite a bit of controversy.

Down
1. Bach’s “Mass in ___” : B MINOR
Perhaps the most famous mass in classical music is J. S. Bach’s “Mass in B minor”, fittingly completed just before he died. It was one of the last of Bach’s compositions, although much of the music was composed earlier in his life.

5. Proctor’s need : TIMER
A “proctor” is a supervisor, especially of an examination in a school, or perhaps of a dormitory. The word “proctor” originated in the late 1500s, a contraction of the word “procurator”, the name given to an official agent of a church.

7. “___-de-Lance” (debut of Nero Wolfe) : FER
“Fer-de-Lance” is a novel by Rex Stout, the first of his books to feature the famous detective Nero Wolfe.

Nero Wolfe is a fictional detective and the hero of many stories published by author Rex Stout. There are 33 Nero Wolfe novels for you to read, and 39 short stories. There are also movie adaptations of two of the novels: ” Meet Nero Wolfe” (1936) which features a young Rita Hayworth, and “The League of Frightened Men” (1937). One of Wolfe’s endearing traits is his love of good food and beer, so he is a pretty rotund character.

12. Without sides, you might say : A LA CARTE
“Carte” is a word sometimes used in French for a menu. Menu items that are “à la carte” are priced and ordered separately, as opposed to “table d’hôte” which is a fixed price menu with limited choice.

30. Ninth-largest body known to orbit the sun : ERIS
In Greek mythology, Eris is the goddess of strife and discord. The name “Eris” is derived from the Greek word for strife, and translates into Latin as “Discordia”. In Greek her counterpart is Harmonia, and in the world of the Roman gods, Concordia. The largest dwarf planet in our solar system is called Eris, named after the goddess.

Jonas Salk was an American medical researcher, famous for developing the first safe polio vaccine. In the fifties, especially after the 1952 epidemic, polio was the biggest health fear in the US because it killed thousands, left even more with disabilities and most of the victims were children. The situation was dire and the authorities immediately quarantined the family of any polio victim, and that quarantine was so strict that in many cases the families were not even permitted to attend the funeral of a family member who died from the disease.

32. Doctor in Hugh Lofting tales : DOLITTLE
I must have read all the “Doctor Dolittle” books when I was growing up. They were written by the English novelist Hugh Lofting. Doctor Dolittle was of course the man who “talked to the animals”.

34. Doctrine associated with Betty Friedan : FEMINISM
Betty Friedan was a leading activist in the American Women’s Movement. She was the first president of the National Organization for Women (NOW), and organized the Women’s Strike for Equality in 1970. She also authored the book “The Feminine Mystique”, first published in 1963.

41. Craft store? : HANGAR
“Hangar” is a French word for “shed”. The French first started using the term for a “shed for airplanes” in the very early 1900s.

45. Out of the game, in chess : MATED
In the game of chess, when the king is under immediate threat of capture, it is said to be “in check”. If the king cannot escape from check, then the game ends in “checkmate” and the player in check loses. In the original Sanskrit game of chess, the king could actually be captured. Then a rule was introduced requiring that a warning be given if capture was imminent (today we announce “check!”) so that an accidental, early ending to the game doesn’t occur.

51. 2001 album featuring “Love Don’t Cost a Thing” : J.LO
J.Lo is the nickname of singer and actress Jennifer Lopez. J.Lo is also the title of her second studio album, released in 2001.

53. ___ Redman, hero of Stephen King’s “The Stand” : STU
Stephen King is a remarkably successful author, having sold over 350 million copies of his books, many of which have been made into hit movies. I’ve tried reading two or three, but I really don’t do horror …