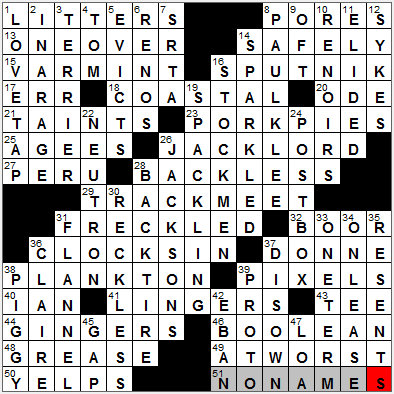 CROSSWORD SETTER: Joe Krozel
THEME: All the Ks … there is a diagonal made up of 7 letter Ks that almost bisects the grid from going from the southwest to northeast.
COMPLETION TIME: 20m 33s
ANSWERS I MISSED: 0


Today’s Wiki-est, Amazonian Googlies
Across
1. Many viviparous births : LITTERS
An animal that is viviparous gives birth to young that are born “live”, having developed in the mother’s body. All mammals are viviparous.

8. Where many beads are formed : PORES
Beads of sweat form in pores in the skin.

15. Coyote, say, to a Western rancher : VARMINT
“Varmint” is an informal variant of “vermin”, something or someone that is undesirable or obnoxious.

16. Subject of the 2001 book subtitled “The Shock of the Century” : SPUTNIK
The Soviet Union launched the Sputnik satellite towards the end of 1957, a development that shocked the establishment in the US. Within months, President Eisenhower made his move, creating the Advanced Research Projects Agency (ARPA, now DARPA) and the National Aeronautics and Space Administration (NASA).

23. Toppers popular with jazzmen : PORK PIES
The pork pie hat originated in the mid-1800s. It is round, usually made of felt, and has a flat top. When first introduced it was a woman’s hat, but then men grabbed hold of it …

25. 1958 Pulitzer-winning novelist and family : AGEES
James Agee was a noted American film critic. He wrote an autobiographical novel “A Death in the Family” that won him his Pulitzer in 1958, albeit posthumously.

26. His character had the signature line “Book ’em, Danno” : JACK LORD
Jack Lord was the stage name of actor John Ryan. He was famous for playing Steve McGarrett on television’s “Hawaii Five-O”, and for playing Felix Leiter in the first James Bond movie, “Dr. No”. He was also offered the part of Captain Kirk in the “Star Trek” TV show, a part that of course eventually went to William Shatner.

27. Territory on a Risk board : PERU
Risk is a fabulous board game, first sold in France in 1957. It was invented by a very successful French director of short films called Albert Lamorisse. He called his new game “La Conquête du Monde”, which translates into English as “The Conquest of the World”. A game of Risk is a must during the holidays in our house …

37. “Nature’s lay idiot, I taught thee to love” penner : DONNE
John Donne is one of England’s most celebrated poets, active early in the 17th century. He spent much of his life in poverty, and even had a short stint in prison for having married his wife without procuring the appropriate permissions. His wife might have regretted that he was released, as she then bore him 12 children in 16 years, passing away a few days after the twelfth child was born.

38. Sea food : PLANKTON
Plankton are tiny organisms that drift in the oceans, as well as in bodies of fresh water. The term comes from the Greek “planktos”, a word meaning “errant”, implying a wanderer or a drifter.

39. Points of view? : PIXELS
A pixel is a dot, the base element that goes to make up a digital image.

40. “Chariots of Fire” co-star Charleson : IAN
“Chariots of Fire” is British film released in 1981. The movie is based on the true story of two athletes training for and participating in the shorter running events in the 1924 Paris Olympics.

44. Choices for snaps : GINGERS
“Ginger snap cookies” are known as “ginger nut biscuits” back in Ireland where I come from.

48. ___ monkey : GREASE
“Grease monkey” is a slang term for a mechanic, a term we’ve been using since the late twenties.

Down
1. Slight show of affection : LOVE TAP
Apparently a “love tap” is an affectionate slap on the back of the head.

4. Petty recording : TOM
The “Petty” that is famous for “recording”, is Tom Petty.

The singer-songwriter Tom Petty first became interested in rock and roll music when he met Elvis Presley at ten-years-old. Later he was inspired to get into a band when he saw The Beatles on “The Ed Sullivan Show”. Pretty cool role models, I’d say …

6. “___ Most Wanted” (“best-of” compilation of a popular TV cop show) : RENO’S
“Reno 911!” is what nowadays is called a “mockumentary”, a documentary-style comedy that parodies the television show “COPS”. I am afraid I don’t watch either as they’re not my cup of tea.

7. Miss hitting a piñata?: Abbr. : SRTA
Today piñatas are usually made from cardboard that is brightly decorated with papier-mâché. Piñatas originated in Mexico, probably among the Aztecs or Mayans. Traditionally a piñata was made out of a clay pot, adorned with feathers and ribbons and filled with small treasures. During religious ceremonies the clay pots would be suspended and broken open so that the contents would spill out onto the ground at the feet of a god as an offering.

8. Bauhaus artist and teacher : PAUL KLEE
The literal translation to the term “Bauhaus” is “House of Building”. It was a school (meaning education establishment) that operated from 1919 to 1933. It became famous for its approach to design across many disciplines, everything from art to typography.

The artist Paul Klee was born in Switzerland, but studied art in Munich in Germany. You can see many of his works in the San Francisco Museum of Modern Art and, if you get to Bern in Switzerland, even more of them at the Zentrum Paul Klee that was opened in 2005.

9. “___ I had heard of Lucy Gray”: Wordsworth : OFT
“Lucy Gray” is a poem written by William Wordsworth in 1798. It tells of a young girl who headed out into a storm one evening, and was never seen again.

10. “La Loge” and “La Grenouillère” : RENOIRS
Pierre-Auguste Renoir was a French painter, very much at the forefront of the Impressionist movement. Renoir was a prolific artist, with several thousand works attributed to him. The largest collection of Renoirs is actually in the United States. You can see 181 of his paintings at the Barnes Foundation just outside Philadelphia.

11. Skipped over : ELIDED
To elide is to pass over, omit or slur a syllable when speaking.

12. General George at Gettysburg : SYKES
George Sykes was a career officer in the US Army, fighting for the Union during the Civil War. He fought in the First and Second Battles of Bull Run, and the Battle of Gettysburg.

19. Job for some wall fixers : SPACKLING
Spackling paste is a hole-filling product used to repair surface defects in wood, drywall and plaster. “Spackle” is actually a brand name, but we tend to use it as a generic term.

22. Deuterium has one : NEUTRON
Deuterium is a naturally occurring isotope of hydrogen. An atom of hydrogen contains one electron and a nucleus with one proton. Deuterium also has one electron but the nucleus contains one proton and one neutron. Two atoms of hydrogen combines with one atom of oxygen to make water, as we all know. Two atoms of deuterium combine with one atom of oxygen to make what is commonly called “heavy water”, a compound that’s highly prized in the nuclear power industry.

24. London letter getter : POST BOX
A “post box” is what we call a mailbox on the other side of the Atlantic.

26. Twenties : JACKSONS
The 20-dollar bill is called a “Jackson” as it bears the portrait of President Andrew Jackson on the front side of the bill. Over one-fifth of all notes printed today are 20-dollar bills, and the average life of a “Jackson” is a little over 2 years, after which it is replaced due to wear.

31. Muleta material : FLANNEL
The “muleta” is the red flannel cloth that a matador uses towards the end of a bull fight, instead of a cape. The muleta serves to distract the bull and also to hide the sword that is used for the kill. The term “matador” is only used in English, and translates aptly enough as “killer”.

36. Danes featured in films : CLAIRE
Claire Daines is an actress from New York City, known these days for playing the title role in HBO’s “Temple Grandin”.

42. Israel’s first U.N. delegate : EBAN
Abba Eban was an Israeli diplomat and politician, born Aubrey Solomon Meir Eban in Cape Town, South Africa. While working at the United Nations after WWII he changed his name to “Abba”, the Hebrew word for “father”, reportedly as he could see himself as the father of the nation of Israel.

47. Mauna ___ : LOA
Mauna Loa on the “big island” of Hawaii is the largest volcano on the planet (in terms of volume, not height). The name “Mauna Loa” is Hawaiian for “Long Mountain”.