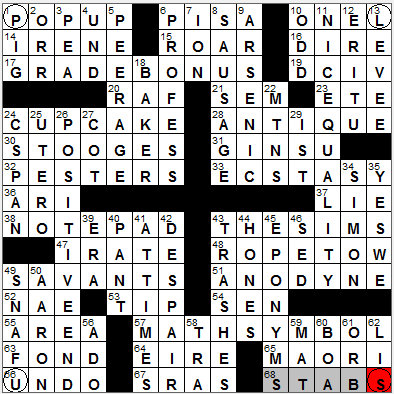 CROSSWORD SETTER: Ben Fish
THEME: PLUS … There is a blurb (note) accompanying this crossword, “Two hints for 17- and 57-Across and 11- and 26-Down appear somewhere in this puzzle”. The hints are the big PLUS sign at the center of the grid, and the letters P-L-U-S circled in the corners of the grid. All the theme answer are uses for a “+” sign:


Today’s Wiki-est, Amazonian Googlies
Across
6. Site of some Galileo experiments : PISA
Galileo Galilei may be the most famous son of the city of Pisa in Italy, considered by many to have been the father of modern science. In the world of physics, he postulated that objects of different masses would fall at the same rate provided they did so in a vacuum (so there was no air resistance). There is a story that he dropped two balls of different masses from the top of the Leaning Tower of Pisa to demonstrate this, but this probably never happened. Centuries later, Astronaut David Scott performed Galileo’s proposed experiment when he dropped a hammer and feather on the moon during the Apollo 15 mission and we all saw them hit the moon surface, at exactly the same time.

14. Dutch princess who’s the daughter of Queen Juliana : IRENE
Princess Irene is the second child of the late Prince Bernhard and Queen Juliana of the Netherlands. Princess Irene created a great deal of turmoil in her homeland when she converted from Protestantism to Roman Catholicism in order to marry Prince Carlos Hugo of Bourbon-Parma. Such was the outcry that no one from the Dutch Royal Family attended her wedding, and she lost her right of succession to the throne. The couple settled in Madrid, but divorced 17 years later. While they were married Princess Irena never once returned to the Netherlands.

20. Org. with a targetlike mark on its flag : RAF
The Royal Air Force (RAF) is the oldest independent air force in the world (i.e. the first air force to become independent of army or navy forces). The RAF was formed during WWI on April 1, 1918, a composite of two earlier forces, the Royal Flying Corps (part of the Army) and the Royal Naval Air Service. The RAF’s “finest hour” has to be the Battle of Britain when the vastly outnumbered British fighters fought off the might of the Luftwaffe causing Hitler to delay his plan to cross the English Channel. This outcome prompted Winston Churchill to utter these memorable words:

23. Time for a pique-nique, maybe : ETE
One might spend the summer (été) having picnics (pique-niques) in France.

28. Ming jar, e.g. : ANTIQUE
The Ming Dynasty lasted in China from 1368 to 1644. The Ming Dynasty oversaw tremendous innovation in so many areas, including the manufacture of ceramics. Late in the Ming period, a shift towards a market economy in China led to the export of porcelain on an unprecedented scale, perhaps explaining why we tend to hear more about Ming vases than we do about porcelain from any other Chinese dynasty.

30. Second bananas : STOOGES
In the 1950s “banana” was slang for a comedian, especially one in a burlesque show. The top-billed comic was the “top banana” and below him came the “second banana”.

31. Kind of knife : GINSU
Ginsu knives are more famous for their hard-sell television ads than they are for their efficacy in the kitchen. The Ginsu phenomenon took off in the seventies when two brothers found a set of knives called “Eversharp”, manufactured in Ohio. The brothers changed the brand name to something more exotic, and Japanese in particular, (Ginsu) and then produced ads that made references to Japanese martial arts. I think they made a fortune …

33. Seventh heaven : ECSTASY
In the cosmology associated with some religious traditions, the universe is said to be made up of Seven Heavens. The highest of these is the “seventh heaven”.

36. N.L. West team, on scoreboards : ARI
The Arizona Diamondbacks joined Major League Baseball’s National League in 1998. By winning the World Series in 2001 the Diamondbacks became the fastest expansion team to do so in Major League history.

43. Best-selling PC game released in 2000 : THE SIMS
“SimCity” is a very clever computer game. Players build and grow cities and societies by creating the conditions necessary for people (the Sims) to move in and thrive. “SimCity” was launched in 1989, and to this day it is consistently ranked as one of the greatest computer games of all time.

49. Learned ones : SAVANTS
A savant is a learned person. Although “savant” can also be short for “idiot savant”.


The term “idiot savant” is French, and literally means “learned idiot” … not very nice, huh? Nowadays we use the term savant syndrome to describe a very specific condition in which an individual displays extensive expertise in one area in contrast with overall behavioral limitations. I suppose the archetypal savant was played by Dustin Hoffman in the fictional movie, 1988’s “Rain Man“.

51. Analgesic : ANODYNE
Something that is “anodyne” is analgesic, capable of removing pain. “Anodyne” comes from the Greek “an-” meaning “without” and “odyne” meaning “pain”.

54. Upper body: Abbr. : SEN
The Senate is the upper body of Congress.

64. Home for Samuel Beckett : EIRE
An Irishman I may be, but I have yet to come away from a Samuel Beckett play feeling satisfied that I spent my time well. Of course, I am in the minority, as his play “Waiting for Godot” was once voted the most significant English language play of the 20th century. Maybe I will try again one day …

65. Language known to native speakers as “te reo” : MAORI
The Māori are the indigenous people of New Zealand. They are eastern Polynesian in origin and began arriving in New Zealand relatively recently, starting some time in the late 13th century. The word “māori” simply means “normal”, distinguishing the mortal human being from spiritual entities.

7. ___ exchange : ION
Ion exchange is a chemical process, often used in the purification of drinking water and the softening of household water, although there are many other uses. One version of the technique involves passing a liquid over a resin in a cartridge. “Bad” ions in the liquid are exchanged for “good” ions from the resin, so the resin cartridge collects the contaminants and the treated liquid passes out of the cartridge. The process is reversible, so the cartridge can be “back-washed” and reused.

8. Link in the food chain? : SAUSAGE
Link sausages are so called as they can come in chains, with each sausage being a link in that chain.

9. #33 on a table : ARSENIC
Dmitri Mendeleev was a Russian chemist. When he classified elements according to their chemical properties he noticed patterns, and was able to group elements into his famous 1869 Periodic Table. So powerful was his table that he actually predicted the properties of some elements that had not even been discovered back in 1869. Appropriately enough, element number 101, mendelevium, was named after Mendeleev.

12. Baritone piece sung by Renato : ERI TU
The aria “Eri tu” is from Verdi’s opera “Un ballo in maschera” (A Masked Ball). The opera tells the story of the assassination of King Gustav III of Sweden during a masked ball.

13. New Orleans sight : LEVEE
A levee is an artificial bank, usually made of earth, running along the length of a river. It is designed to hold back the river water at a time of potential flooding. “Levee” is the French word for “raised”, and is an American term that originated in French-speaking New Orleans around 1720.

25. “In ___,” Nirvana album : UTERO
“In utero” is a Latin term meaning “in the uterus”. The Latin “uterus” translates as both “womb” and “belly”. The Latin word was derived from the Greek “hystera” also meaning womb, which gives us the words “hysterectomy”, and “hysterical”.

Nirvana is a rock band, formed in Washington in 1987 by Kurt Cobaine and Krist Novoselic. The band effectively disbanded in 1994 after Cobaine committed suicide.

Kurt Cobaine was famous as the lead singer of the band Nirvana. Cobaine was constantly in the spotlight for the last few years of his short life. The media was fascinated with his marriage to fellow rock star Courtney Love, and continually reported on Cobaine’s heroin addiction. He finally succumbed to the pressure and committed suicide by inflicting a gunshot wound to his head in 1994, at only 27 years of age.

27. Prison staple : COT
Our word “cot”, meaning a small bed, comes from the Hindi “khat”, the word for a couch or hammock.

34. One who says a lot in a game : SIMON
“Simon says” is a kids’ game. The idea is for the players of the game to obey the “controller” who gives instructions. But, the players should only obey when the controller uses the words, “Simon says …”. The game has very old roots, with a Latin version that uses the words “Cicero dicit fac hoc” (Cicero says do this).

35. “___ can” (campaign slogan) : YES WE
“Yes We Can” was a chant adopted by the Obama team during the successful 2008 presidential campaign. The actual slogan for the campaign was, “Change we can believe in”.

45. Curie, Kelvin and Fermi : EPONYMS
An eponym is a name for something derived from the name of a person.

The curie is a unit of radioactivity, named after Marie and Pierre Curie. The kelvin is a unit of measurement for temperature, named after William Thomson, 1st Baron Kelvin. The unit of distance called a fermi is pretty small, one quadrillionth of a meter, and is named after Enrico Fermi.

49. Major mess : SNAFU
SNAFU is an acronym standing for Situation Normal: All Fouled Up (well, that’s the “polite” version!). As you might imagine, the term developed in the US Army, during WWII.

50. Sorkin who wrote “The Social Network” : AARON
“The Social Network” provides fascinating insight into the history of the Facebook website, a highly recommended movie. The film’s screenplay was written by Aaron Sorkin, who is also famous for writing the play “A Few Good Men”, and one of my favorite screenplays “Charlie Wilson’s War”. And of course, he wrote all the best scripts for television’s “The West Wing”.

56. Shakespearean stir : ADO
“Much Ado About Nothing” is a favorite of mine, a play of course by William Shakespeare. It is a comedic tale of two pairs of lovers with lots of mistaken identities and double meanings. I once saw it performed in the fabulous Globe Theatre in London … by an all-female cast!

60. Flapper wrapper : BOA
Flappers were the so-called new breed of young women of the twenties. The flappers wore their hair short (with ringlets), dressed in short skirts, and generally rebelled against the accepted norms of the time. The term “flapper” comes from the 1920 movie “The Flapper” starring Olive Thomas as a young woman who lived the more liberal lifestyle that was emerging at that time.

62. French flower : LIS
“Lys” (also “lis”) is the French word for “lily”, as in fleur-de-lys, the heraldic symbol often associated with the French monarchy.