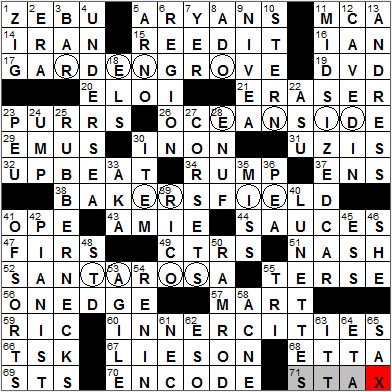 CROSSWORD SETTER: Peter A. Collins
THEME: INNER CITIES … each of the themed answers is the name of a city, with a second city’s name “inside” the the first, called out by four circled letters:


Today’s Wiki-est, Amazonian Googlies
Across
1. Humped ox : ZEBU
Zebu cattle are most often seen on the Indian subcontinent. They’re the sub-species with the fatty hump on their shoulders, droopy ears and large dewlap (flap of skin under the neck).

11. Longtime Elton John label : MCA
Elton John’s real name is Reginald Dwight. He was knighted in 1998, not for his music but for his charitable work. He founded his own Elton John AIDS Foundation back in 1992.

16. “Atonement” author McEwan : IAN
Ian McEwan is an English novelist with a track record of writing well-received novels. His most famous work at the moment I would say is “Atonement” which has benefited from the success of the fabulous movie adaptation released in 2007.

Reno, Nevada was named in honor of Major General Jesse Lee Reno, a Union officer killed in the Civil War. The city has a famous “Reno Arch”, a structure that stands over the main street, erected in 1926 to promote an exposition planned for the following year. After the expo, the city council decided to keep the arch and held a competition to decide what wording should be displayed, and the winner was “The Biggest Little City in the World”.

19. Something that’s burned : DVD
The acronym DVD doesn’t actually stand for anything these days, although it originally was short for Digital Video Disk. The use of the word “video” was dropped as DVDs are no longer limited to storing video content.

20. Morlock’s counterpart in science fiction : ELOI
In the 1895 novel by H. G. Wells “The Time Machine”, there were two races that the hero encountered in his travels into the future. The Eloi are the beautiful people that live on the planet’s surface, while the Morlocks are a race of cannibals living underground who use the Eloi as food.

Enid, Oklahoma takes its name from the old railroad station around which the city developed. Back in 1889, that train stop was called Skeleton Station. An official who didn’t like the name changed it to Enid Station, using a character from Alfred Lord Tennyson’s “Idylls of the King”. Maybe if he hadn’t changed the name, the city of Enid would now be called Skeleton!

29. Flightless flock : EMUS
The emu has had a tough time in Australia since man settled there. There was even an “Emu War” in Western Australia in 1932 when migrating emus competed with livestock for water and food. Soldiers were sent in and used machine guns in an unsuccessful attempt to drive off the emus. The emus were clever, breaking their usual formation and adopting guerrilla tactics, operating as smaller units. After 50 days of “war”, the military withdrew. Subsequent requests for military help for the farmers were ignored. The emus had emerged victorious …

31. Israeli arms : UZIS
The first Uzi sub-machine gun was designed in the late 1940s, by Major Uziel Gal, who gave his name to the gun.

38. California State University campus site : BAKERSFIELD (ERIE)
The city of Bakersfield, California was founded in 1869, named after a Colonel Thomas Baker, and in fact at one point the city was known simply as Baker’s Field.

Erie is a city in the very north of Pennsylvania, right on the southern shore of Lake Erie. The city takes its name from the Erie Native American tribe that resided in the area.

41. “Ere Heaven shall ___ her portals …”: Byron : OPE
George Gordon Byron, known simply as “Lord Byron”, was an English poet active in the early 1800s. He was equally as famous for his poetry as he was for the wild excesses in his personal life. He lived much of that life outside of England, and fought for revolutionaries in both Italy and Greece. Lord Byron died from a fever contracted while fighting for the Greeks against the Ottomans.

51. Part of rock’s CSNY : NASH
The supergroup Crosby, Stills & Nash (CSN) is made up of David Crosby, Stephen Stills and Graham Nash. The band can grow to “CSNY” when the trio is joined by Neil Young. Fans have been known to call the act C, S, N and sometimes Y, a play on the expression that names all the vowels, “A, E, I, O, U and sometimes Y”.

The city of Taos, New Mexico is named for the Native American village nearby called Taos Pueblo.

59. Ocasek of the Cars : RIC
Ric Ocasek is an American musician of Czech heritage, and was the lead vocalist of the rock band, the Cars.

68. “At Last” singer James : ETTA
Etta James is best known for her beautiful rendition of the song “At Last”. Sadly, as she discloses in her autobiography, James has lived a life ravaged by drug addiction, leading to numerous legal and health problems.

70. Obfuscate, in a way : ENCODE
“To obfuscate” is to make something unclear, a word derived from the Latin “obfuscare” meaning “to darken”.

71. Pringles alternative : STAX
Stax is a brand name of potato snack made by Lay’s. Stax are similar to its famous competitor, Pringles.

Down
2. Prohibition ___ : ERA
The 18th Amendment to the US Constitution was a great victory for the temperance movement, and in 1919 ushered in the Prohibition era. Highly unpopular, Prohibition was repealed in 1933 by the 21st Amendment.

5. View from the Leaning Tower : ARNO
Pisa is right on the Italian coast, sitting at the mouth of the River Arno, and is famous for its Leaning Tower. The tower is actually the campanile (bell tower) of the city’s cathedral, and it has been leaning since it was completed in 1173. Just shows you how important good foundations are …

13. Ursula of “The Blue Max” : ANDRESS
The actor Ursula Andress was quite the sex symbol in the sixties, famously playing Honey Ryder in the first James Bond movie, “Dr. No”. Andress was born in Switzerland and is fluent in English, French, Italian, German and her native Swiss-German.

18. Trains to Wrigley : ELS
The famous ballpark that is home to the Chicago Cubs was built in 1914. Back then it was known as Weegham Park, before becoming Cubs Park when the Cubs arrived in 1920. It was given the name Wrigley Field in 1926, after the owner William Wrigley, Jr. of chewing gum fame.

The Chicago “L” is the second largest rapid transit system in the US, with the New York City Subway being the largest. The “L” is also the second oldest, again with the New York Subway system having the honor of being around the longest. Note that the official nickname for the system is the “L” (originally short for “elevated railroad”), although the term “El” is also in common use (especially in crosswords as “ELS”). The L is managed by the Chicago Transit Authority (CTA).

22. Sch. in Jonesboro : ASU
The city of Jonesboro, Arkansas is home to Arkansas State University (ASU).

23. Little, in Lyon : PEU
The city of Lyon in France, is also known as Lyons in English.

35. The Rolling Stones’ “___ You” : MISS
Even though Mick Jagger and Keith Richards have been the driving force behind the Rolling Stones for decades, they didn’t start the group. The band was the idea of guitarist and harmonica player Brian Jones, and it was he who invited Richards and Jagger to join, as well as Ian Stewart, Bill Wyman and Charlie Watts to make an original lineup of six. Jones called the band “Rollin’ Stone” back then in 1962, named for the song by Muddy Waters. Jones was the leader, manager and decision maker for the first few years until songs written by Richards and Jagger became hits and he started to lose artistic control. In 1967, Jones was arrested for drug possession, and again in 1968. When his trouble with the law prevented him from getting a US work visa, Jones wasn’t able to accompany the Stones on a 1969 US tour. That was the last straw, it seems, and Jones and the Stones parted company. Famously, one month later, Jones was found dead, at the bottom of his swimming pool.

39. Puerto ___ : RICO
Puerto Rico is located in the northeastern Caribbean (in the Atlantic Ocean), east of the Dominican Republic. The name “Puerto Rico” is Spanish for “rich port”. The locals often call their island Borinquen, the Spanish form of “Boriken”, the original name used by the natives, .

40. Ornamental crescents : LUNETTES
“Lunette” is the French word for “little moon”, and is used in the world of architecture to describe a half-moon shaped space in a wall. Lunettes are often seen above doors.

42. One who deals in rags? : PIANIST
Ragtime music was at the height of it popularity in the early 1900s. The genre takes its name from its characteristic “ragged” rhythms. The most famous ragtime composer was Scott Joplin, who had a big hit with his “Maple Leaf Rag” when it was published in 1899. Ragtime fell out of favor around 1917 when the public turned to jazz, and then had a resurgence in the forties when jazz musicians started to include ragtime tunes in their repertoires. But it was the 1973 movie “The Sting” that brought the true revival, as the hit soundtrack included numerous ragtime tunes by Scott Joplin, including the celebrated melody “The Entertainer”, originally published in 1902.

50. Flintlock accessory : RAMROD
A ramrod is a “stick” that is inserted into the barrel of an older firearm in order to pack the bullet or ball up against the charge of gunpowder.

54. Kidney secretion : RENIN
Renin is the enzyme in the body that regulates arterial blood pressure. It is also known as angiotensinogenase, and is secreted by the kidneys.

61. Japanese supercomputer maker : NEC
NEC is the name that the Nippon Electric Company chose for itself outside of Japan after a re-branding exercise in 1983.

62. That, in Tabasco : ESO
Tabasco is one of Mexico’s 31 states, and is located in the very southeast of the country.

63. Cousin ___ of 1960s TV : ITT
In the television sitcom “The Addams Family”, the family had a frequent visitor called Cousin Itt. Itt is a short man, with long hair that runs from his head to the floor. Itt was played by Italian actor Felix Silla.

64. H : ETA
Eta is the seventh letter of the Greek alphabet, and is a forerunner of our Latin character “H”.

65. Coltrane blew it : SAX
Ravi Coltrane is a jazz saxophonist from Long Island, New York. Ravi is the son of tenor saxophonist John Coltrane and jazz pianist Alice Coltrane. His parents named him after the marvelous sitar player Ravi Shankar.