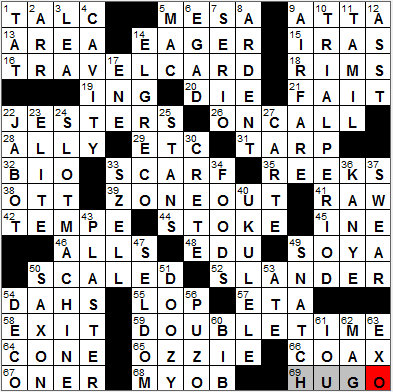 CROSSWORD SETTER: Susan Gelfand
THEME: DOUBLE TIME … each of the theme answers is made up of two words, each of which can be paired with the word TIME:

1. It gets patted on the bottom : TALC
Talc is a mineral, actually hydrated magnesium silicate. Talcum powder is composed of loose talc, although these days “baby powder” can also be corn starch.

5. Tableland : MESA
“Mesa” is the Spanish for “table” and is of course is how we get the name “mesa”, a geographic feature.

Ira Gershwin was the lyricist who worked with his brother George to create such American classics as the songs “I got Rhythm” and “Someone to Watch Over Me”, and the opera “Porgy and Bess”. After his brother died, Ira continued to create great music, working with the likes of Jerome Kern and Kurt Weill.

Ira Glass is a well respected presenter on American Public Radio, most noted for his show “This American Life”. I was interested to learn that one of my favorite composers, Philip Glass, is Ira’s first cousin.

18. Basketball hoops : RIMS
Basketball truly is an American sport. It was created in 1891 by a James Naismith at the YMCA in Springfield, Massachusetts. His goal was to create something active and interesting for his students in the gym. The first “hoops” were actually peach baskets, with the bottoms of the baskets intact. When you got the ball in the “net”, you had to clamber up and get it back out again to continue the game!

19. Gerund’s finish : -ING
A gerund is a form of a verb that can be used as a noun. For example, the gerund of the verb “to act” is “acting”, as in the sentence, “We really enjoyed the acting”.

21. ___ accompli : FAIT
Fait accompli is a French term, literally translating as “accomplished fact”. It is used in English to mean “a done deal”.

29. End-of-list abbr. : ETC
Et alii (et al.) is the equivalent of et cetera (etc.), with et cetera being used in place of a list of objects, and et alii used for a list of names.

31. Diamond cover : TARP
Originally, tarpaulins were made from canvas covered in tar that rendered the material waterproof. The name tarpaulin comes from “tar” and “palling”, with “pall” meaning “heavy cloth covering”.

45. Suffix with brigand : -INE
A brigandine is a type of body armour from the Middle Ages. It is a cloth jacket in essence, with small metal plates riveted to the fabric. Basically a brigandine is a precursor to our modern flak jacket.

48. Alternative to .com or .org : .EDU
A domain name is basically the address of a website on the Internet. Not too long ago I moved this website to a new address (from puzzle.paxient.com to NYTCrossword.com). Like in the real world, one pays for an address. I now own (well rent!) both of the addresses used for this blog, but choose to “do business”, publish the blog, at the more memorable address … NYTCrossword.com. It’s sort of like preferring to have a Park Avenue address instead of one on say Elm Street. In the Internet world, the address is intended to indicate what type of activity goes on at a particular address. So an address with “.com” implies a “company” website, a “.org” implies a non-profit website and “.edu” implies an education website. But, in reality anyone can rent whatever address they want, as it just goes to the highest bidder. Most folks remember “.com” addresses, so they are the most popular. “.com” is meant to imply a “business address” as I say, but it can even be used to chat about crosswords!

49. Bean type : SOYA
What are known as soybeans here in the US are called soya beans in most other English-speaking countries. So, I drink soy milk here in America, but when I am over in Ireland I drink “soya milk”.

54. Counterparts of dits : DAHS
Dahs and dits are the sound equivalents of dashes and dots in Morse Code.

Samuel Morse was a very accomplished and reputable painter (he was engaged to paint a portrait of President John Adams, for example). In 1825 he was in Washington working on a commissioned painting when he received a one-line letter by horse messenger telling him that his wife was ill. He left immediately for his home in New Haven, Connecticut but by the time he arrived she had already died and had been buried. This single event spurred him to move from painting to the development of a rapid means of long distance communication, leading to the single-wire telegraph and Morse code.

57. Greek H : ETA
Eta is the seventh letter of the Greek alphabet, and is a forerunner of our Latin character “H”.

64. Dairy Queen purchase : CONE
Soft serve ice cream was developed by John McCullough in 1938, and he was able to get his new dessert carried by a local ice cream store in Illinois. The store owner and McCullough were so swamped with sales that they opened a store specifically built around the product in Joliet, Illinois, and this was the first Dairy Queen outlet. There are now over 5,700 Dairy Queen franchises in 19 countries. We’ve even got one in Ireland …

67. Lollapalooza : ONER
A lollapalooza is something outstanding, one of a kind.

69. Novelist Victor : HUGO
Victor Hugo was a French poet and playwright, known in his native country mainly for his poetry. However, outside of France he is perhaps more closely associated with his novels, such as “Les Misérables” and “The Hunchback of Notre-Dame”.

Down
1. Bit of body art, for short : TAT
The word “tattoo” was first used in English in the writings of the famous English explorer Captain Cook. In his descriptions of the indelible marks adorning the skin of Polynesian natives, he anglicized the Tahitian word “tatau” into our “tattoo”.

5. Apple on a table : MAC
Mac is short for Macintosh, the line of computers from Apple Inc. The first Mac was introduced in 1984, and I remember someone showing me one at work in those early days of personal computing. There was a piece of white plastic connected to the main computer by a cord, and I was amazed when the guy showed me that it controlled where the cursor was on the screen. My colleague told me that this lump of plastic was called “a mouse” …

7. Prefix with comic : SERIO-
Something described as “seriocomic” has both serious and comical elements, but generally the comic side predominates.

9. Expedia calculation : AIR FARE
Expedia is one of the largest Internet-based travel companies, and has a site where you can book airline tickets and reserve hotel rooms and rental cars. I use Expedia a lot because I am an AARP member, and the AARP Travel website is powered by the Expedia search engine. In my travels I’ve found by comparison shopping that the AARP Travel site usually has the best prices for hotel rooms.

11. Indian tongue : TAMIL
Tamil is the main language spoken by the Tamil people of the subcontinent of India. Tamil is described as one of the greatest and oldest classical languages in the world, with Tamil literature having been around for over 2,000 years.

14. Artist born in 30-Down : EL GRECO
“El Greco” (“the Greek”, in Spanish) was the nickname of the artist whose real name was Domenikos Theotokopoulos. El Greco was born in Crete in 1541, and moved to Venice to study art when he was in his early twenties. A few years later he moved to the city of Toledo in central Spain, where he lived and worked for the rest of his life.

22. Frilly neckwear : JABOT
A jabot is a very ornate clothing accessory worn around the neck. Jabots were often made from lace, and were originally worn by upper class males around the mid-1600s, with women adopting the style in the late 1800s. Jabots are still worn today in some official costumes. For example, some of our female Supreme Court justices might be seen wearing jabots.

23. Type of type : ELITE
The type size know as elite, or twelve pitch, has twelve characters to the linear inch.

25. Nixon aide Maurice : STANS
Maurice Stans was Secretary of Commerce in the Nixon administration. He resigned from the cabinet to head up the finance committee of Richard Nixon’s reelection campaign. Famously, money raised by this committee was used to finance the Watergate crimes.

27. ___ blanche : CARTE
“Carte blanche” was imported from French in the early 1700s when it was used to mean “blank paper” (in French it means “white paper”). Later in the century the term came to mean “full discretionary power”, which is how we use the word today.

30. Minotaur’s home : CRETE
Crete is the largest of all the Greek islands. It figures prominently in Greek mythology, for example as the birthplace of Zeus and home to the Minotaur slayed by Theseus. It was also from Crete that Icarus and Daedalus escaped using wings that they constructed for themselves.

36. Rapper West : KANYE
Kanye West is a rap singer from Atlanta, Georgia. That’s all I know …

40. Luau instrument : UKULELE
The ukulele originated in the 1800s, and mimicked a small guitar brought to the Hawaiian Islands by Portuguese immigrants.

50. Anglo-___ : SAXON
Germanic tribes invaded Great Britain from the early 5th century, and created the nation that we now call England. The Anglo-Saxons, as they came to be called, held sway in the country until 1066, the year of the Norman Conquest. The Anglo-Saxons were descendants of three Germanic tribes:

54. Art ___ : DECO
Art Deco is the name given to a style of design and architecture of the 1920s, which actually had its roots in Belgium and then spread throughout Europe before arriving in North America. Celebrated examples of art deco architecture are the magnificent Chrysler Building in New York City completed in 1930, and the GE Building that sits in the middle of Rockefeller Center also in New York City, with the address of “30 Rock”.

56. “The Godfather” author : PUZO
The novelist and screenwriter Mario Puzo, was best known for his book “The Godfather”, which he also co-adapted for the big screen. His name is less associated with some very famous screenplays that he wrote, including “Earthquake”, “Superman” and “Superman II”.

60. Drool catcher : BIB
The word “bib” comes form the Latin “bibere” meaning “to drink”, as does our word “imbibe”. So, maybe it’s less about spilling the food, and more about soaking up the booze …

“Cosmopolitan” magazine was first published way back in 1886! It started out life as a family magazine, then a literary publication, and took it’s present form as a women’s magazine in the sixties.