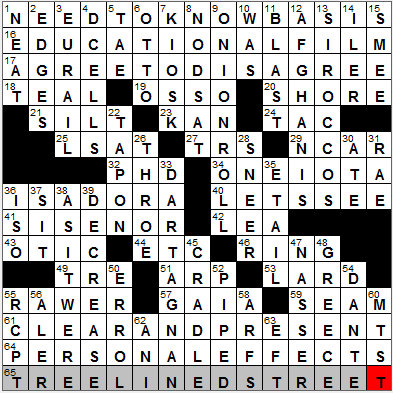 
Today’s Wiki-est, Amazonian Googlies
Across
18. Cousin of a canvasback : TEAL
The beautiful color of teal takes it name from the duck called a “teal”, which has dark, greenish-blue (teal) markings on its head and wings.

The canvasback is a species of duck found here in North America. The name “canvasback” comes from the fact that the duck’s back is canvas in color, oddly enough …

23. Agricultural Hall of Fame locale: Abbr. : KAN
The National Agriculture Center and Hall of Fame was chartered in 1960 by the US Congress, and is located in Bonner Springs, Kansas.

24. Certain X or O : TAC
When I was growing up in Ireland, we played “noughts and crosses” … our name for tic-tac-toe.

25. It includes an analytical reasoning sect. : LSAT
The Law School Admission Test (LSAT) has been around since 1948.

27. ___-80 (old computer) : TRS
The TRS-80 was a model of computer sold by the Tandy Corporation through the company’s Radio Shack outlets. Back in 1977, the “big three” of personal computers were Apple, Commodore and Tandy. Well, at least Apple is still around …

29. Nascar Hall of Fame locale: Abbr. : N CAR
The NASCAR Hall of Fame opened its doors relatively recently, in 2010. It is located in Charlotte, North Carolina.

32. A good defense may result in it, briefly : PHD
PhD is an abbreviation for “philosphiae doctor”, Latin for “teacher of philosophy”.

34. A wee bit : ONE IOTA
Iota is the ninth letter in the Greek alphabet. We use it to portray something very small, as it is the smallest of all the Greek letters.

The English actress Vanessa Redgrave is part of a predominant acting family. Her father was the great Michael Redgrave, and her sister the accomplished Lynn Redgrave. Vanessa’s daughter was Natasha Richardson, the actress and wife of Liam Neeson who died after a skiing accident in 2009.

44. “And that sort of thing”: Abbr. : ETC
Et alii (et al.) is the equivalent of et cetera (etc.), with et cetera being used in place of a list of objects, and et alii used for a list of names.

46. Evidence of some growth : RING
Growth rings can be seen in a horizontal cross section of a tree trunk. These rings are caused by the change in rate of a growth of a tree that comes with the seasons, so the rings are more easily discerned in trees that grow in regions with marked seasonal changes.

51. “Configuration” artist : ARP
Hans Arp was a French artist, renowned for his work with torn and pasted paper, although that wasn’t the only medium he used. He was the son of a French mother and German father, and spoke both languages fluently. When he was speaking German, he gave his name as Hans Arp, but when speaking French, he called himself Jean Arp. Both Hans and Jean translate into English as John.

53. Enrich : LARD
“To lard” a speech or a written work perhaps, is to embellish it.

57. Earth as an organism : GAIA
In ancient Greek religion, Gaia was the Earth goddess, the mother of everything. The Roman equivalent was the goddess Terra.

61. Like real danger : CLEAR AND PRESENT
The term “clear and present danger” originated in a judicial opinion handed down by Justice Oliver Wendell Holmes, Jr. The case he decided concerned the right of the government to regulate speech against the draft during WWI. As I understand it, he stated that the government had a right to regulate speech in circumstances when there was a clear and present danger that the US Congress had a responsibility to prevent.

Down
3. Continental pass provider : EURAIL
In my days as a student, the way to backpack around Europe was using a Europass. Nowadays that is known as a Eurail pass. The Eurail pass gives you access to most trains (and some shipping lines) right across the continent.

5. South Korea’s Roh ___ Woo : TAE
Roh Tae Woo was the President of South Korea from 1988 to 1993. Although Roh had a military pedigree and basically forced his way into office, his rule is noted for advancing the cause of democracy in the country. However, after his term was up, Roh was convicted of treason, mutiny and corruption and was sentenced to 22½ years in jail. He was later pardoned by President Kim Young-sam.

6. Cartoon busman Mann : OTTO
Otto Mann drives the school bus on “The Simpsons”. He is voiced by Harry Shearer. Otto is a Germanic character, and his name is a play on the Ottoman Empire. Whenever Bart sees him, he greets him with “Otto, man!”

12. Kandahar cash : AFGHANIS
The Afghani is the official currency of Afghanistan.

Kandahar is the second largest city in Afghanistan, and is located in the south of the country. Kandahar was founded in the 4th century BC by Alexander the Great, when he named the city Alexandria.

13. Dust-laden winds : SIROCCOS
The siroccos are strong winds that originate in the Sahara Desert and blow across the north of the African continent over the Mediterranean and into Southern Europe.

14. Soprano player Robert : ILER
The actor Robert Iler’s most famous role was that of A.J., son of mob leader Tony Soprano in HBO’s “The Sopranos”. Apparently Iler’s screen persona has spilled over into his personal life, as he was arrested for armed robbery of two tourists in 2001 (and pleaded guilty to a lesser charge).

15. Hook accompanier : SMEE
In J. M. Barrie’s play and novel about Peter Pan, Smee is one of Captain Hook’s pirates and is his right-hand man. He is described by Barrie as being “Irish” and “a man who stabbed without offence”. Nice guy!

26. Painful struggle : THROE
Our contemporary word “throe”, meaning a spasm of pain, has been around since the early 1600s. It is a different spelling of the word “throwe” that had been around since around 1200 AD and which meant pain, particularly a pang of childbirth or the agony of death. Pain, from cradle to grave …

31. Movie heroine Norma ___ Webster : RAE
“Norma Rae” is a 1979 movie starring Sally Field as Norma Rae Webster in a tale of union activities in a textile factory in Alabama. The film is based on the true story of Crystal Lee Sutton told in a 1975 book called “Crystal Lee, a Woman of Inheritance”.

33. Dumas hero : D’ARTAGNAN
The “Three Musketeers” were Athos, Porthos and Aramis, and their young protégé was D’Artagnan. A musketeer was an infantry soldier who was equipped with a musket. Paradxically, Alexander Dumas’ “Three Musketeers” really didn’t use their muskets, and were better known for their prowess with their swords.

35. Some cashless commerce : ETAIL
“Etail” is the term used these days for online shopping. It is often compared to regular shopping in the “real world” by juxtaposing it with a “brick and mortar” store.

47. Six-Day War figure : NASSER
The Six-Day War took place from June 5th to June 10th, 1967, and was fought between Israel and its neighbors Egypt, Jordan and Syria. By the time the ceasefire was signed, Israel had seized huge swaths of land formerly controlled by Arab states, namely the Gaza Strip, the Sinai Peninsula, the West Bank of the Jordan River and the Golan Heights. The overall territory under the control of Israel grew by a factor of three in just six days.

Gamal Abdel Nasser was the second president of Egypt, from 1956 until he died in 1970. He had stood alongside Muhammad Naguib, Egypt’s first president, during the Egyptian Revolution of 1952 which overthrew the ruling monarchy of Egypt and Sudan. Nasser was an advocate of Pan-Arabism, an ideology promoting unification of Arab peoples and countries. President Nasser went so far as forming the United Arab Republic (UAR), a union between Egypt and Syria that started in 1958, but fell apart in 1961 when Syria withdrew.

48. Attic locale : GREECE
Greece is divided into 13 peripheries, regional administrative divisions. The capital of Greece, Athens, is located in the periphery of Attica.

50. Owl in Harry Potter tales : ERROL
Errol is one of the magical creatures from the “Harry Potter” series of books by J. K. Rowling. Errol is a Great Grey Owl that delivers the mail for the Weasley family. He is old and prone to accidents so often needs help from other owls.

54. He met Charon in the underworld : DANTE
The River Styx in Greek mythology was the river that formed the boundary between the Earth and the Underworld (or Hades). The souls of the newly dead had to cross the River Styx in a ferryboat piloted by Charon. Traditionally, a coin would be placed in the mouths of the dead “to pay the ferryman”.

The Toronto Blue Jays, founded in 1977, is the only baseball team outside the US to win a World Series, doing so in 1992 and 1993. And now that the Montreal Expos have relocated to Washington, the Blue Jays are the only Major League Baseball team headquartered outside of the US.

The Tampa Bay Rays is a relatively “young” franchise, being formed in 1998. They are apparently still working on building the team, as the Rays have finished in last place in the Eastern Division of the American League in almost every season so far.

58. Boxer rebellion cries? : ARFS
The boxer breed of dog (one of my favorites!) originated in Germany. My first dog was a boxer/Labrador mix, a beautiful animal. Our current family dog is a boxer/pug mix, another gorgeous creature.

62. Black bird : ANI
The tropical bird called the ani is related to the cuckoo, although it doesn’t go around robbing other birds’ nests like a cuckoo does!

63. Young pond dweller : EFT
Newts wouldn’t be my favorite animals. They are found all over the world, living on land or in water depending on the species, but always associated with water even if it is only for breeding. Newts metamorphose through three distinct developmental stages during their lives. They start off as larvae in water, fertilized eggs that often cling to aquatic plants, unlike the eggs of frogs and toads which float freely. The eggs hatch into tadpoles, the first developmental form of the newt. After living some months as tadpoles swimming around in the water, they undergo another metamorphosis, sprouting legs and replacing their external gills with lungs. At this juvenile stage they are known as efts, and leave the water to live on land. A more gradual transition takes place then, as the eft takes on the lizard-like appearance of the adult newt.