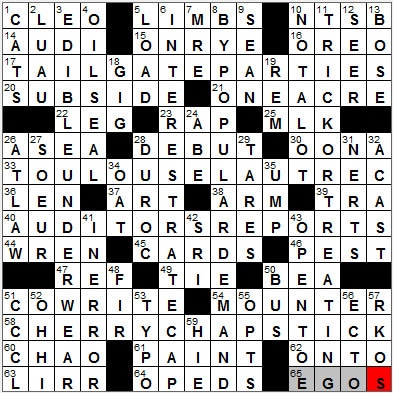 
Today’s Wiki-est, Amazonian Googlies
Across
1. Lethally poisoned ruler, familiarly : CLEO
The asp is a venomous snake found in the Nile region of Africa. It is so venomous that the asp was used in ancient Egypt and Greece as a means of execution. Cleopatra observed such executions noting that the venom brought on sleepiness without any painful spasms. When the great queen opted to commit suicide, the asp was therefore her chosen method.

10. Pipeline accident investigator: Abbr. : NTSB
The National Transportation Safety Board is responsible for the investigation of major accidents involving transportation. Included in this broad definition is the transportation of fluids in pipelines. The organization is independent in that it has no ties to other government agencies or departments so that its investigations can be viewed as “impartial”. The NTSB also earns a little money for the US as it hires out its investigation teams to countries who don’t have the necessary resources available on their own soil.

14. Saab competitor : AUDI
The Audi name has an interesting history. The Horch company was founded by August Horch in 1909, but soon after, Horch was forced out of his own business. He set up a new company and continued to use his own name as a brand. The old company sued him for using the Horch name so a meeting was held to choose something new. Horch’s young son was studying Latin in the room where the meeting was taking place. He pointed out that “Horch” was German for “hear”, and he suggested “Audi” instead, the Latin for “listen”. Don’t hear … just listen …

16. Item in a “lick race” : OREO
The Oreo was the biggest selling cookie in the 20th century, and almost 500 billion of them have been produced since they were introduced in 1912 by Nabisco. In those early days the creme filling was made with pork fat, but today vegetable oils are used instead. If you take a bite out of an Oreo sold outside of America you might notice a difference from the homegrown cookie, as coconut oil is added to give a different taste.

25. Jan. honoree : MLK
I remember listening to the full text of Dr. Martin Luther King, Jr’s “I have a dream …” speech not long after I moved to this country. I think I am man enough to admit that my eyes misted up as I listened to the words. I also recall thinking how lucky I was to have been invited to live in this great country, which was facing up to some of the sins of its past.

I have a dream that one day this nation will rise up and live out the true meaning of its creed: “We hold these truths to be self-evident: that all men are created equal.”

28. Introduction : DEBUT
“Début” is a French word meaning “first appearance”. It was originally used to describe the first stroke in a game of billiards, before entering the language in a more general sense.

30. Princess ___ (Disney duck) : OONA
Princess Oona is one of the ducks appearing in stories about “Donald Duck”. Created in 1994, Oona lives in a cave and is usually proclaiming her interest in Donald, romantically that is …

33. Capturer of fin-de-siècle Paris : TOULOUSE-LAUTREC
The celebrated French painter Henri de Toulouse-Lautrec came from an aristocratic family. This breeding may have made life comfortable for him, but it was the source of his famous disabilities. He had congenital conditions that resulted from the inbreeding that was a tradition in his family (Henri’s parents were first cousins).

39. ___ poco (soon, in Sorrento) : TRA
Sorrento is a small town on the Italian coast, overlooking the Bay of Naples. It is an extremely popular tourist destination.

58. It can make for fruity kisses : CHERRY CHAPSTICK
ChapStick is a brand name of lip balm owned by Pfizer, although it is so popular that the term tends to be used generically. ChapStick was invented way back in the 1880s by a Dr. Charles Browne Fleet in Lynchburg, Virginia.

60. Elaine ___, first female Asian-American cabinet member : CHAO
When President George W. Bush appointed Elaine Chao as Secretary of Labor, he made a bit of history as Chao then became the first Chinese American in history to hold a cabinet post. It turned out that Chao became the only cabinet member to hold her post for President Bush’s full eight years in office. In 1993, Chao married Mitch McConnell, the Republican Leader of the US Senate.

Down
2. Occasion to use a cooking pit : LUAU
Nowadays the word “luau” denotes almost any kind of party on the Hawaiian Islands, but to the purist a luau is a feast that always includes a serving of “poi”, the bulbous underground stems of taro baked with coconut milk.

3. Tasteful bedclothes? : EDIBLE UNDERWEAR
When the inventors of edible underwear applied for a patent in the mid-seventies for “candy pants”. their application was denied. The Patent Office deemed that “candy” and “pants” were mutually exclusive ideas. The inventors persisted, won a patent and then made a lot of money by selling edible underwear from their food manufacturing plant in Chicago. Ugh …!

7. Field fare, briefly : MRE
The Meal, Ready-to-Eat (MRE) comes in a lightweight package, easier to tote around. It replaced the more cumbersome Meal, Combat, Individual (MCI) in 1981, a meal-in-a-can. In turn, the MCI had replaced the C-ration in 1958, a less sophisticated meal-in-a-can with a more limited choice.

9. Parker who was one of the original faces at Facebook : SEAN
Sean Parker came to national attention in 1998 as co-founder of Napster, the file-sharing service for music that created such a fuss in the recording industry. He started to advise the founders of Facebook in 2004, and became the company’s first president later that year. If you watch the very entertaining movie about Facebook called “The Social Network” you’ll see Parker played by Justin Timberlake. Parker comes across as a real ass in the film.

11. Activity of some ghosts : TRICK OR TREATING
The practice of trick or treating originated in Ireland and Britain back in the Middle Ages, when it was known as “souling”. Poor people would wander from door-to-door on November 1st (All Souls Day) seeking food in return for prayers for the dead.

13. Giant in audio equipment : BOSE
Bose Corporation was founded in 1964 by Amar G. Bose, and is a company that specializes in manufacture of audio equipment.

19. Dreamer’s activity : REM
REM is an acronym standing for Rapid Eye Movement sleep. REM sleep takes up 20-25% of the sleeping hours and is the period associated with one’s most vivid dreams.

24. Old ___ (Civil War eagle mascot) : ABE
Old Abe was a bald eagle, the mascot of the 8th Wisconsin Volunteer Infantry Regiment during the Civil War. The regiment named their mascot for President Abraham Lincoln, even though Old Abe was actually a “she” eagle. She was carried into battle and was famous for flapping her wings and screaming during the fighting. Even though Old Abe died in a fire in the Wisconsin State Capitol after the war, her memory lives on. Old Abe appears on the insignia of the US Army’s 101st Airborne Division, and gives the unit the nickname the “Screaming Eagles”.

26. Counselor-___ : AT-LAW
I find the terms used for professionals in the world of law very confusing! I think that an “attorney” is someone who is legally empowered to represent another person or entity. A “lawyer” is someone who has been trained in the law and can give legal advise. “Counselor-at-law” is an older term that was used in some states where there was a distinction between the attorney who prepared a case, and a counselor who argued that same case in court.

28. Hardy red hog : DUROC
A Duroc is a breed of domestic pig, red in color and with a large frame, and a tendency to be quite aggressive. The breed originated in New England and supposedly takes its name from a thoroughbred stallion that was famous around 1800.

29. Weight factors : TARES
“Tare” is the weight of a container, deducted from the gross weight to determine the net weight, the weight of the container’s contents.

31. Quaint complaint : NERTS
“Nerts” is a slang term, a corruption of “nuts!” and has the same meaning.

Sri is a title of respect for a male in India.

56. Prefix with -morph : ECTO-
Back in the forties, the American psychologist William Herbert postulated that a person’s temperament could be associated with body-type. This theory has largely been debunked, but his classification of the population into three body-types is still used today:

57. Bygone theaters : RKOS
The RKO Pictures studio was formed when RCA (RADIO Corporation of America) bought the KEITH-Albee-ORPHEUM theaters (and Joe Kennedy’s Film Booking Offices of America). The RKO acronym then comes from the words “Radio”, “Keith” and “Orpheum”.