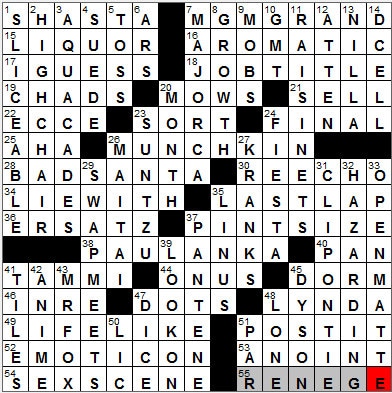 
Today’s Wiki-est, Amazonian Googlies
Across
1. California river, county or mountain : SHASTA
The origin of the name “Shasta” seems to be unclear. It may have come from the Russian “tchastal” meaning “white, clean, pure”, a name given to the volcanic peak by early Russian immigrants.

7. Vegas Strip hotel : MGM GRAND
MGM Grand is the name given to a chain of hotel resorts and casinos, most famously the MGM Grand in Las Vegas. The MGM Grand Las Vegas was the largest hotel in the world when it opened in 1993, and is now second largest (behind the Venetian, also in Las Vegas).

16. Redolent : AROMATIC
Something that is redolent is aromatic, emits a fragrance. Redolent is an Old French word.

19. Waste of an election? : CHADS
We are all familiar with “hanging chads” after the famous Florida election recounts of 2000. A chad is any piece of paper punched out from a larger sheet. So, those round bits of paper we’ve all dropped over the floor when emptying a hole punch, they’re chads.

26. Peewee : MUNCHKIN
“Munchkin” is a word that we use quite commonly these days, usually to describe a young child. The first Munchkins were characters created by L. Frank Baum in his book “The Wonderful Wizard of Oz”, published in 1900.

28. 2003 movie involving Christmas Eve robberies : BAD SANTA
“Bad Santa” is a black comedy, not one I really enjoyed, starring Billy Bob Thornton as the not-so-nice Santa Claus. If you want to see an unrated version of the film, you can just buy the DVD and watch the special feature called “Badder Santa”.

36. Counterfeit : ERSATZ
Something described as “ersatz” is a copy, and usually not a good one. “Ersatz” comes from the German verb “ersetzen” meaning “to replace”.

38. Co-writer of Michael Jackson’s posthumous hit “This Is It” : PAUL ANKA
The song “This Is It” was released after the death of Michael Jackson, amid some degree of controversy. Jackson co-wrote the song with Paul Anka way back in 1983 and recorded it with Anka as a duet, although the song was never released. The Jackson family found a recording of the song in Michael’s effects after he died, and they added vocals from the rest of the Jackson brothers and some instrumentation. When they announced their intention to release the revamped song, Anka claimed that Jackson had stolen the recording from his studio, so after a dispute the Jackson estate agreed to pay Anka 50% of the money made from the song.

41. “Your Precious Love” duet singer Terrell : TAMMI
Tammi Terrell was a soul singer, associated with the Motown sound. She achieved fame when record producers teamed her up with Marvin Gaye in 1967, with the duo producing a string of hits together. Sadly, just a few months after the partnership was formed, Terri Terrell collapsed on stage one day, falling into Marvin Gaye’s arms. She was diagnosed with a malignant brain tumor, from which despite treatment she never recovered. Gaye and Terrell continued working together for another couple of years, and in 1969 produced their famous hit “The Onion Song”. A few months later, Tammi Tirrell passed away, at 24 years of age.

Linda Byrd Johnson Robb is the eldest of President Johnson’s two daughters. While living in the White House, Lynda dated the actor George Hamilton. The pair became one of the first couples outside of the President and First Lady to be afforded Secret Service protection, largely due to concerns following the assassination of President Kennedy.

51. Office attachment : POST-IT
The phenominal success of the Post-it note relies on the unique “low-tack” adhesive on the back of the paper. The adhesive was developed as far back as 1968 by Dr. Spencer Silver of 3M. He tried to promote the value of the low-tack properties of the material, both within and without 3M, but had no success. Five years later, a colleague at 3M used the glue to hold his bookmark in place in his hymnal at church, and from there came up with the idea of the Post-it note.

52. It often includes a colon : EMOTICON
An emoticon is a glyph created using text characters, usually to represent facial features, and usually oriented sideways. The emoticon is designed to indicate emotion or attitude. The classic example is the smiley face 🙂

54. R-rated element : SEX SCENE
The Motion Picture Association of America’s (MPAA) film-rating system is purely voluntary and is not backed by any law. Movie theaters agree to abide by the rules that come with the MPAA ratings in exchange for access to new movies.

55. Card table error : RENEGE
To renege on something is to back out of it. It’s a word commonly used in card games like bridge and whist. A renege is when a player doesn’t follow suit, even though there may be a card of the suit led in his/her hand.

3. Pool exhibitions : AQUACADES
An aquacade is an exhibition of swimming and diving etc, usually set to music. One of the most famous examples of the genre was Billy Rose’s Aquacade that was first produced in 1937. The star line up included Johnny Weissmuller and a very young Esther Williams.

4. It’s blue in an old song : SUEDE
“Blue Suede Shoes” was written and first recorded by Carl Perkins, in 1955. The idea for the song was given to him by Johnny Cash. Cash had been serving with the military in Germany and there met an airman who referred to his military regulation air shoes as “blue suede shoes”. The idea was reinforced when Perkins heard a young man who was dancing say to his partner, “Don’t step on my suede shoes”. Perkins version of the song was very, very successful, actually “going gold” in sales. Elvis Presley’s version of course did even better.

6. “___ Grammatica” (classic work on Latin) : ARS
“Ars Grammatica” is an overview of Latin grammar, the most famous edition of which was written by Aelius Donatus.

7. Island where Rafael Nadal was born : MAJORCA
Rafael Nadal is a Spanish tennis player, noted for his expertise on clay courts, earning him the nickname “The King of Clay”.

10. Setting for BBC reports, in brief : GMT
Greenwich Mean Time is the time at the Prime Meridian, the meridian that runs through Greenwich in London.

11. Movie box set? : RAISINETS
Raisinets are chocolate-covered raisins produced by Nestlé. They are often sold in boxes in movie theaters.

12. “Tuesday ___” (Count Basie tune) : AT TEN
“Count” Basie’s real given name was “William”. Count Basie perhaps picked up his love for the piano from his mother who played, and gave him his first lessons. Later, his mother paid for professional lessons for her son. Basie’s first paying job as a musician was in a movie theater, where he learned to improvise a suitable accompaniment for the silent movies that were being shown.

13. Nabisco brand : NILLA
As one might expect, Nilla is a shortened from of “vanilla”. However, you won’t find any vanilla in Nilla cookies or wafers. They always been flavored with vanillin, synthetic vanilla. Is nothing sacred …?

23. He wrote “All war is deception” : SUN TZU
“The Art of War” is the famous military treatise written by Sun Tzu, a Chinese general from the 6th century BC. I’ve even seen the principles from this book applied to modern business!

24. ___ Bowl : FIESTA
The Fiesta Bowl is a college football bowl game played every year at the University of Phoenix Stadium in Arizona.

33. Filming process for multiple aspect ratios : OPEN MATTE
In the days before widescreen televisions, many movie producers opted to record their films in the 4:3 aspect ratio that suited TV screens. The aspect ratio has to be changed for projection in the widescreen format in a movie theater, and this is achieved using the “open matte” technique. Quite simply the top and bottom of the picture is matted out, in the projector, and I guess one hopes there’s nothing important going on in those parts of the image!

35. Second pope, following St. Peter : LINUS
There is some uncertainty about who was the actual second Pope, after Saint Peter. Some sources indicate that it was Pope Saint Linus, and others Pope Clement I.

37. Procter & Gamble hair-care line : PANTENE
The hair care product line called Pantene was introduced in the late 40s in Europe, but has been owned by Proctor & Gamble since the 80s. The name “Pantene” was chosen as one of the main ingredients was the alcohol called panthenol.

42. Style on Japanese screens : ANIME
Anime is animation in the style of Japanese Manga comic books.

The Japanese word “manga” means “whimsical pictures”, and is an apt term to describe the Japanese style of comic book. Manga publications are more diverse than American comic books, and have a larger audience. Manga cover many subjects including romance, sports, mystery, business, horror, and mystery.

Roald Dahl’s name is Norwegian. Dahl’s parents were from Norway, although Dahl himself was Welsh. Dahl became one of the most successful authors of the twentieth century, and a couple of his most famous titles are “James and the Giant Peach” and “Charlie and the Chocolate Factory”.

45. James who invented the Dual Cyclone vacuum cleaner : DYSON
Dyson vacuum cleaners do not use a bag to collect dust. James Dyson invented the first vacuum cleaner to use cyclonic separation in 1979, frustrated at the poor performance of his regular vacuum cleaner. As Dyson cleaners do not use bags, they don’t have to deal with collection bags that are blocked with fine dust particles, even after emptying. Cyclonic separation uses high speed spinning of the dust-containing air so that the dust particles are thrown out of the airflow into a collection bin. We should buy one …