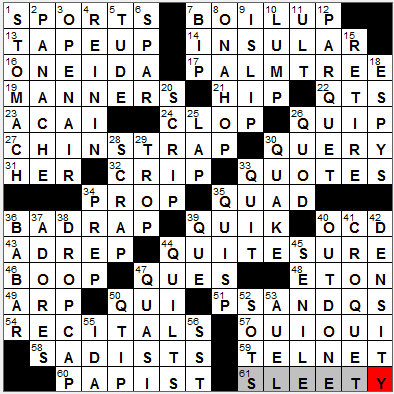 CROSSWORD SETTER: Brendan Emmett Quigley & Ian Livengood,
THEME: Mind your PS AND QS … there are two diagonal lines, one of Ps and the other of Qs, running across the grid:
51A. Good behavior … or a hint to two lines of letters in this puzzle : PS AND QS
COMPLETION TIME: 13m 02s
ANSWERS I MISSED: 0


Today’s Wiki-est, Amazonian Googlies
Across
1. Crew and others : SPORTS
Crew is another name for competitive team rowing. The narrow boat used is called a “shell”.

16. County of Utica, N.Y. : ONEIDA
Today, Utica in New York is known as “Second Chance City” due to the recent influx of refugees from war-torn parts of the world, and from Bosnia in particular. These immigrants have helped to revitalize the area and reverse a trend of population loss.

21. Cool : HIP
The slang term “hep” meaning “cool” has the same meaning as the later, derivative term “hip”. The origins of “hep” seem unclear, but it was adopted by jazz musicians of the early 1900s.

23. Berry used as a dietary supplement : ACAI
Açaí is a palm tree native to Central and South America. The fruit has become very popular in recent years as its juice is a very fashionable addition to juice mixes and smoothies.

27. It’s snapped on a gridiron : CHIN STRAP
We never used the word “gridiron” when I was growing up (meaning a grill used for cooking food over an open fire). So, maybe I am excused for finding out fairly recently that a football field gridiron is so called because the layout of yard lines over the field looks like a gridiron used in cooking!

31. Stevie Wonder’s “I Was Made to Love ___” : HER
The great musician Stevie Wonder signed up with Motown Records when he was just 11-years-old. He has been remarkably loyal to the label and is still recording with Motown some 50 years later. The level of Stevie Wonder’s success is illustrated by his 22 Grammy Awards, the most Grammys awarded to a male solo artist. Wonder was born 6 weeks prematurely, and incomplete development of blood vessels in his eyes caused the retinas to detach leaving him blind soon after birth. He recorded a hit single called “I Was Made to Love Her” in 1967, and one of his co-writers was his mother, Lula Mae Hardaway.

32. Blood’s counterpart : CRIP
The Crips are a street gang here in the US, with origins in Los Angeles going back to 1969. It is believed that the Crips have up to 35,000 members today across the country, and there is even a presence in the US military, both here and abroad. The main rivals of the Crips are the Bloods.

35. Thigh muscle, informally : QUAD
The quadriceps femoris is the muscle group at the front of the thigh. It is the strongest muscle in the human body, and is also the leanest. The “quads” are actually a group of four muscles in the upper leg, hence the use of the prefix “quad-”.

39. Classic Nestlé brand : QUIK
Nestlé Quik was introduced in 1948, and is a flavored, powdered milk drink. It was sold in Europe as “Nesquik”, and that brand name replaced “Quik” here in the US in 1999. The Nesquik mascot is the Quik Bunny. The Quik Bunny had a large “Q” on a collar around his neck, and with the brand name change this “Q” became an “N”, and he is now known as the Nesquik Bunny.

40. Neat freak’s condition, e.g., for short : OCD
Obsessive-compulsive disorder (OCD) is the fourth most commonly diagnosed mental disorder, making it about as common as asthma.

43. Madison Ave. figure : AD REP
Madison Avenue became the center of advertising in the US in the twenties, and serves as the backdrop to the great TV drama “Mad Men”. There aren’t many advertising agencies left on Madison Avenue these days though, as most have moved to other parts of New York City.

46. Betty ___ : BOOP
Betty Boop made her first appearance on the screen in 1930, in a cartoon called “Dizzy Dishes”. Her character was modeled on the the It-girl, the sexy Clara Bow of movie fame. Back then Betty Boop was a sexy poodle, and it wasn’t until 1932 that she morphed into completely human form. Betty was quite the risqué figure, but her vampish ways only lasted a few years. When the Production Code of 1934 came into force, Betty started to dress more modestly, and toned down her behavior.

48. It has boys aged 13 to 18 : ETON
The world-famous Eton College is just a brisk walk from Windsor Castle, which itself is just outside London. Eton is noted for producing many British leaders, including David Cameron who took power in the last UK general election. The list of Old Etonians also includes Princes William and Harry, the Duke of Wellington, George Orwell, and the creator of James Bond, Ian Fleming (as well as 007 himself, in the Fleming novels).

49. He said “Art is a fruit that grows in man, like a fruit on a plant” : ARP
Hans Arp was a French artist, renowned for his work with torn and pasted paper, although that wasn’t the only medium he used. He was the son of a French mother and German father, and spoke both languages fluently. When he was speaking German, he gave his name as Hans Arp, but when speaking French, he called himself Jean Arp. Both Hans and Jean translate into English as John. His 1937 abstract work in bronze called “En Songe” can be seen at Le Musée d’Art Moderne de Saint-Étienne in France.

51. Good behavior … or a hint to two lines of letters in this puzzle : PS AND QS
There isn’t really a clear derivation of the phrase “mind your Ps and Qs”, an expression meaning “mind your manners”, or “mind your language”. One story that I like is that it originated in the wonderful pubs of England. Innkeepers would watch how much their thirsty patrons consumed, recording each pint (P) and quart (Q) that was downed on a board using Ps and Qs as shorthand. The more rowdy drinkers would be asked to “mind their Ps and Qs”.

54. Some Carnegie Hall performances : RECITALS
The prestigious Carnegie Hall in midtown Manhattan opened for business in 1891. It was named after the philanthropist Andrew Carnegie, who provided the funds for construction.

60. One not with the Church of England : PAPIST
The pejorative term “papist” was first used in the days of the Reformation in England, use by some in Henry VIII’s Church of England to refer to supporters of the Catholic Church (and the Pope, in particular).

2. Flamboyance : PANACHE
Someone exhibiting panache is showing dash and verve, and perhaps has a swagger. “Panache” is a French word used for a plume of feathers, especially one in a hat.

7. Marcel Marceau character : BIP
Marcel Marceau was the most famous mime of all time, a native of Strasbourg in France. Marceau made a cameo appearance in Mel Brooks’s “Silent Movie”, playing himself. In the scene, Mel Brooks is asking Marceau to appear in his movie (a question asked silently of course, in subtitles), and Marceau turns to the camera and speaks the only word in the whole film, “Non!” (French for “No!”). The mime speaks! Brilliant …

12. Decorative floor : PARQUET
Parquetry is a geometric pattern using pieces of wood. It is often seen in flooring, but also in some items of furniture.

18. Awards show for athletes : ESPYS
The ESPY Awards are a creation of the ESPN sports television network. One difference with similarly named awards in the entertainment industry is that ESPY winners are chosen solely based on viewer votes.

20. Money substitute : SCRIP
Scrip isn’t legal tender, but operates just like currency in specific applications. It is in effect a form of credit. Originally the word “scrip” was used for a certificate giving one the right to receive something, often shares of a stock. “Scrip” is probably short for (sub)script(ion) receipt.

26. Q.E.D. part : QUOD
Q.E.D. is used at the end of a mathematical proof or a philosophical argument. The acronym stands for the Latin “quod erat demonstrandum” meaning “that which was to be demonstrated”.

29. St. Pete ball field, with “the” : TROP
Tropicana Field is home to the Tampa Bay Rays of Major League Baseball.

35. Cereal with a propeller-headed mascot : QUISP
Quisp is a breakfast cereal from Quaker Oats. It was sold from 1965 until the late ‘70s. Incredibly, Quisp regained its popularity with the rise in the use of the Internet. It was relaunched in 2001 as the “first Internet cereal”.

36. “Histoire de ___,” first in a popular series of children’s books : BABAR
Babar the Elephant originated in France, a creation of Jean de Brunhoff in 1931. The first book was “Histoire de Babar”, a book so successful it was translated into English two years later for publication in Britain and the US. Jean de Brunhoff wrote six more Babar stories before he died in 1937, and then his son Laurent continued his father’s work.

39. Canadian prov. : QUE
The name “Quebec” comes from an Algonquin word “kebec” meaning “where the river narrows”. This referred to the area around Quebec City where the St. Lawrence River narrows as it flows through a gap lined by steep cliffs.

41. Low-stakes game? : CROQUET
The very genteel game of croquet is played on lawns all over the world. It’s the game where mallets are used to hit wooden balls through hoops embedded in the grass. The name “croquet” is from French dialect and means “hockey stick”. The game originated in Brittany in France, and was popularized in Ireland in the 1830s.

50. Wax remover : Q-TIP
Cotton swabs were originally marketed under the name “Baby Gays”, but this was changed in 1926 to “Q-Tip”, with the Q standing for “quality”.

53. Jean who wrote “The Shelters of Stone” : AUEL
As Jean Auel prepared her first book in the “Earth’s Children” series, she did a lot of research about the Ice Age, the setting for her stories. She went as far as taking a survival course in cold conditions, learning to build an ice cave and how to make fire, tan leather and knap stone.

55. The Gem State: Abbr. : IDA
Idaho has the nickname the Gem State, mainly because almost every known gemstone has been found there.

56. Display at the Intrepid Sea-Air-Space Museum, for short : SST
The most famous warship to bear the name USS Intrepid was an aircraft carrier launched during WWII and decommissioned in 1974. The Intrepid was the first US carrier to launch planes with steam catapults, and she was also a recovery ship for two NASA space missions: one Mercury flight and one Gemini flight. You can go see the Intrepid now in New York City where she is the base for the Intrepid Sea-Air-Space Museum. You can even see a retired British Airways Concorde at the museum.

The most famous Supersonic Transport (SST) was the Concorde, a plane that’s no longer flying. Concorde had that famous “droop nose”. The nose was moved to the horizontal position during flight to create the optimum aerodynamic shape thereby reducing drag, and was lowered during taxi, takeoff and landing, so that the pilot had better visibility. The need for the droop nose was driven largely by the delta-shaped wings. The delta wing necessitates a higher angle of attack at takeoff and landing than conventional wing designs, so the pilot needed the nose lowered so that he or she could see the ground.