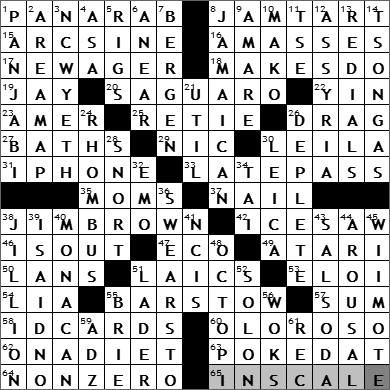 
Today’s Wiki-est, Amazonian Googlies
Across
1. Like some nationalism : PAN-ARAB
Pan-Arabism is the concept of uniting all the peoples and countries of the Arab world, from the west of Africa across the north of the continent to the eastern extremes of the Middle East.

17. Crystal-rubbing type : NEW AGER
The New Age Movement is a western philosophy with roots that date back to the early 1800s. The movement focuses on achieving the highest human potential as an individual and embraces many traditionally eastern spiritual practices, but eschews all religious doctrines. New Age music is composed with the intent of supporting this philosophy. It tends to be very minimalistic, very tonal and harmonic. It is often used as a backdrop for relaxation or meditation.

19. The great Gatsby : JAY
“The Great Gatsby” is the 1925 novel by F. Scott Fitzgerald that tells of the prosperous life of Jay Gatsby during the Roaring 20s, the Jazz Age. Gatsby develops an obsessive love for Daisy Fay Buchanan, a girl he met while serving during WWI, and meets again some years later after he has improved his social standing.

20. Tall bloomer with candelabra-shaped branches : SAGUARO
The saguaro is a beautiful cactus, native to the Sonoran Desert in Arizona and in Sonora, Mexico. If you ever get a chance to visit the Saguaro National Park in southern Arizona, I thoroughly recommend it.

23. A.M.A. member?: Abbr. : AMER
The American Medical Association was founded in 1847, at the Academy of Natural Sciences in Philadelphia. The first female member was allowed to join in 1868, but the first African American members weren’t admitted until one hundred years later, in 1968.

25. Fix, as a bowline : RETIE
As an ex-sailor, I have a thing about knots, and the bowline … it’s one of my favorites. It’s the simple but effective loop knot, the one that’s made by “the frog coming out of the pond, going around the tree, and going back into the pond”.

26. What some performers lip-sync in : DRAG
The etymology of the term “drag”, as used in the transvestite world, seems to be unclear. It perhaps relates to the tendency of a transvestite’s skirts to drag along the ground in days of old (although why they just didn’t hitch up their skirts is beyond me!).

29. Córdoba’s land: Abbr. : NIC
There were two conquistadors from Spain with the name Francisco Hernández de Córdoba. One was the first European to explore the Yucatán Peninsula, and the other founded Nicaragua. Nicaragua’s currency is the córdoba, named in his memory.

38. Footballer who co-starred in “The Dirty Dozen” : JIM BROWN
Jim Brown is a former American football star, a running back for the Cleveland Browns in the late fifties and early sixties. As well as being one of the most respected athletes the country has known, he made a great career for himself as an actor. It was while he was filming “The Dirty Dozen”, he announced his retirement from football.

49. Breakout company : ATARI
Breakout is an arcade game developed by Atari and released in 1976. It is like a souped up version of the original video game, “Pong”.

At one point Atari was the fastest growing company in US history, but it never really recovered from the video game crash of 1983.

50. Telecom hookups : LANS
You may have a Local Area Network (LAN) in your house. If you’ve got a PC and a router or switch, likely attached to some modem, then you have a LAN.

51. Flock members : LAICS
Something that is laic (or laical) is something relating to the laity, those members of the church who are not clergy. The term “laic” ultimately comes from the Greek “laikos” meaning “of the people”.

53. Frugivorous creatures of sci-fi : ELOI
Someone or something that is frugivorous is a fruit-eater.

In the 1895 novel by H. G. Wells “The Time Machine”, there were two races that he encountered in his travels into the future. The Eloi are the beautiful people that live on the planet’s surface, while the Morlocks are a race of cannibals living underground who use the Eloi as food.

55. Soprano Josephine : BARSTOW
Josephine Barstow is a soprano from England, and a Dame (the DBE kind), a Dame of the British Empire.

60. Amontillado’s darker relative : OLOROSO
Amontillado is a variety of sherry produced in the Montilla region of Spain. The name Amontillado is sometimes used today as a generic name for any sherry that has a color between a fino (the palest and driest sherry) and an oloroso (darker and sweeter).

Down
1. Most-spoken language in Pakistan : PANJABI
“Panjabi” is a variant spelling of “Punjabi”. Punjabi is the language spoken mainly in the Punjab region of northwestern India and Pakistan.

3. “Mowing” painter, 1907 : NC WYETH
Newell Convers Wyeth, known as N.C. Wyeth, was an American artist and an illustrator. He is actually best known for his illustrations of the Scribner Classics.

7. Norway’s second-largest city : BERGEN
Bergen is the second largest city in Norway, located on the coast at the very west of the country. The city was the first to be occupied by Germany during WWII, falling on the first day of the German invasion of Norway.

8. Many a dreaded native? : JAMAICAN
Dreadlocks are matted coils of hair nowadays usually formed intentionally, although if one lets hair grow out without grooming it naturally forms twisted and matted dreadlocks. The hairstyle is associated with the Rastafarian movement in which the term “dread” is a very positive one, meaning “fear of the Lord”.

10. “Shortfin” or “longfin” fish : MAKO
The shortfin mako shark can appear on restaurant menus, and as a result the species is dying out in some parts of the world. The mako gets its own back sometimes though, and attacks on humans are not unknown. And the shark in Ernest Hemingway’s “The Old Man and the Sea”, that’s a mako.

11. 24th Russian letter : TSE
The Cyrillic alphabet is a writing system that dates back to the First Bulgarian Empire in the 10th century AD. Cyrillic is the alphabet used in Slavic languages, including Russian. When Bulgaria was admitted to the European Union in 2007, Cyrillic became the third official language of the EU, alongside the Latin and Greek alphabets.

12. Old Fertile Crescent land : ASSYRIA
Assyria was an ancient kingdom located on the Upper Tigris river in Mesopotamia (modern-day Iraq), named for it’s capital city of Assur. According to the Bible, of the original Twelve Tribes of Israel, Ten Tribes “disappeared” when the Kingdom of Israel was destroyed by the Assyrians in 720 BCE.

14. Whom Kerry succeeded in the U.S. Senate : TSONGAS
Paul Tsongas was a US senator for the state of Massachusetts. He made an unsuccessful run for the Democratic nomination for US President in 1992, losing out to Governor Bill Clinton.

24. Yellow feature of Brazil’s flag : RHOMBUS
The current Brazilian flag features a starry sky on a blue disc. The pattern of the stars was the one seen over the city of Rio de Janeiro just four days before the flag’s design was officially adopted on November 19, 1889.

30. Big name in lenses : LEICA
Leica is a German optics company, famous for production of lenses and cameras. The 1913 Leica was the first practical camera that could use 35mm film, a size chosen because it was already the standard for film used in motion pictures.

32. Alternative style to goth : EMO
The musical genre of “emo” originated in Washington D.C. in the 80s, and takes its name from “emotional hardcore”. Not my cup of tea …

34. ___ sabaki (martial arts movement) : TAI
Tai sabaki is a movement of the whole body, a term that is used in several martial arts from Japan, including judo and karate.

38. Imaginary number? : JILLION
A “jillion” is just a big, big number, nothing definite.

40. Dweller around Port Hercules : MONACAN
Port Hercules is the only deep-water port in the tiny Principality of Monaco. If you saw the James Bond movie “Golden Eye”, you might remember the scene where Pierce Brosnan tries to stop the theft of a hi-tech helicopter. That scene was filmed in Port Hercules.

41. Show with a “Los Angeles” spinoff : NCIS
NCIS is the Naval Criminal Investigative Service, which investigates crimes in the U.S. Navy and Marine Corps. The service gives its name to the CBS TV show “NCIS”, a spin-off drama from “JAG” in which the main “NCIS” characters were first introduced. The big star in “NCIS” is Mark Harmon.

43. Stain-removing stuff : SAL SODA
Sodium carbonate is a well known as a water softener sold for use in laundry, and is variously described as Sal Soda, Washing Soda and Soda Crystals.

45. Modern-day video game controller : WIIMOTE
“Wiimote” is an alternative name for the Wii Remote, the controller for the Nintendo Wii gaming console.

48. Ink jet producers? : OCTOPI
Octopuses and squid both have the ability to release a dark pigment into the water as a means of escape. The dark pigment is called cephalopod ink (the squid and octopus belong to the class cephalopod). The dark color is caused by melanin, the same constituent that acts as a pigment in human skin.

51. Dockworker : LADER
The verb “lade” meaning “to load” comes from an Old English word “hladan”. Lade also used to mean “to draw water”, and gave us our word “ladle”. So, lade and ladle, are close cousins.

52. One of the Seven Sages of Greece : SOLON
Solon was an Athenian statesman and lawmaker in Ancient Greece. He gave his name to our contemporary word “solon” meaning “a wise lawmaker”.

55. Cracker topper : BRIE
Brie is a soft cheese, named after the French province of Brie where it originated.

56. Vessels seen over fires : WOKS
Wok is a Cantonese word, the name of the frying pan now used in many Asian cuisines.

59. Shop dresser : ADZ
An adze (also adz), while similar to an axe, is different in that the blade of an adze is set at right angles to the tool’s shaft. The blade of an axe is set in line with the shaft.