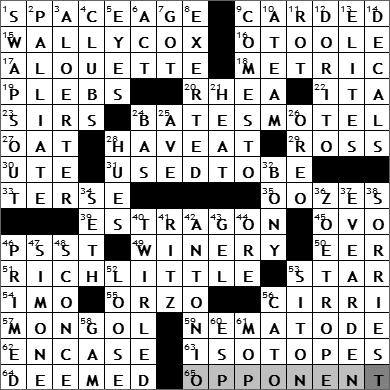 15. Voicer of Underdog on TV : WALLY COX
Wally Cox was a comedian and actor, the voice behind the cartoon character “Underdog”, and the star of the show “Mister Peepers”. He was a great friend of Marlon Brando, and apparently when Brando died, some of Cox’s ashes were mixed with his and were scattered in Death Valley and Tahiti.

16. Voicer of Ego in “Ratatouille” : O’TOOLE
“Ratatouille” is a 2007 animated film produced by Pixar. The hero of the piece is Remy, a rat whose ambition is to become a chef. Remy was voiced by stand-up comedian Patton Oswalt. The veteran actor Peter O’Toole voiced the character Anton Ego, a restaurant critic.

17. Children’s song that’s based on an old work song melody : ALOUETTE
The French-Canadian children’s song starts with, “Alouette, gentille alouette …” “Alouette” is the French word for a bird, the “lark”. The song is actually pretty gruesome, even though it was used to teach children the names of body parts. The origin of the song lies in the French colonists penchant for eating larks, which they considered to be game birds. So in the song, the singer tells the lark that he/she will pluck off one-by-one the lark’s head, nose, eyes, wings and tail.

19. The unwashed : PLEBS
Pleb is probably short for “plebeian”, the name given to someone of the common class in ancient Rome (as opposed to a Patrician, one of the elite).

20. She hid Zeus from Cronus : RHEA
In Greek mythology Rhea was one of the Titans. She was the sister and husband of Cronus, and together they had six children, the last of which was Zeus. Cronus swallowed all of his children as soon as they were born, except for Zeus, who Rhea managed to hide from her husband.

24. Chilly shower setting? : BATES MOTEL
Bates Motel and house were constructed on the backlot of Universal Studios for the 1960 movie “Psycho”. They are still standing, and for me are the highlight of the backlot tour.

27. Kind of milk : OAT
Oat milk is one of the alternatives to cow’s milk, and is lactose free.

30. Subject of a museum in eastern Colorado : UTE
The Ute are a group of American Indian tribes that now reside in Utah and Colorado. The Ute were not a unified people as such, but rather a loose association of nomadic groups.

39. Misanthrope who says “We are all born mad. Some remain so” : ESTRAGON
Estragon is one of the two protagonists in Samuel Beckett’s play, “Waiting for Godot”.

An Irishman I may be, but I have sat through so many Samuel Beckett plays (the Irish dramatist) and I have yet to come away feeling satisfied that I spent my time well. Of course, I am in the minority, as his play “Waiting for Godot” was once voted the most significant English language play of the 20th century. Maybe I will try again one day …

51. Great ape? : RICH LITTLE
Rich Little is a Canadian-born impersonator, known as “The Man of a Thousand Voices”. He lives in Las Vegas, and there was sworn in as a US citizen just a few years ago, in 2008.

55. Literally, “barley” : ORZO
Orzo is pasta that has been formed into granular shapes, much like barley. And indeed, “orzo” is the Italian word for “barley”.

59. Wheatworm, e.g. : NEMATODE
A wheatworm is a parasite on wheat, and is very destructive.

Down
2. Ease : PALLIATE
To “palliate” is to relieve the symptoms of a disease or disorder, without effecting any form of a cure. “Palliate” comes from the Latin “palliatus” meaning “cloaked”.

11. Gobbledygook : ROT
“Gobbledygook” is pompous, officious talk. The term is the invention of a US Congressman, Maury Maverick from Texas. He said he wanted to come up with a word that is imitative of a turkey.

12. Tasty triangle : DORITO
Doritos are a brand of flavored tortilla chips launched in 1964. The name “Doritos” means “little bits of gold” in Spanish.

14. They might provide coverage for racecars : DECALS
A decal is a decorative sticker, short for “decalcomania”. The term is derived from the French “décalquer”, the practice of tracing a pattern from paper onto glass or perhaps porcelain.

21. Track meet event : HEAT
The term “heat”, meaning a qualifying race, dates back to the 1660s. Originally a heat was a run given to a horse to prepare it for a race, to “heat” it up.

25. Mediterranean or Baltic: Abbr. : AVE
Mediterranean and Baltic Avenues are the least landed-upon properties in the game of Monopoly.

34. Biblical 912-year-old : SETH
According to the Bible, Seth was the third son of Adam and Eve, coming after Cain and Abel.

36. Spinning device giving the illusion of motion : ZOETROPE
A zoetrope is a drum-like device with a series of images on the inside, and slits through which the images can be viewed. As the drum is rotated, the images appear to move when viewed through the slits.

37. Principal player in “Grease” : EVE ARDEN
Eve Arden’s most famous role early in her career was playing the high school teacher in the 1950’s radio and television show “Our Miss Brooks”. Years later she played the Principal of Rydell High School in the movies “Grease” (great!) and “Grease 2” (terrible!).

41. Brand of munchables : RITZ
I’ve always liked Ritz crackers. They’ve been around since 1934 when they were introduced by Nabisco. The name Ritz was chosen because the marketing folks felt that the association with Ritz-Carlton would evoke images of wealth and the high life.

42. Composer Vivaldi : ANTONIO
Antonio Vivaldi was one of the great composers of the Baroque period. He achieved  fame and success within in his own lifetime, notoriety that faded soon after he died. His music has reemerged in recent decades, and I am sure everyone is familiar with at least part of his most famous composition, his violin concerto called “The Four Seasons”.

47. She had a 1959 hit with “I Loves You, Porgy” : SIMONE
Nina Simone was the stage name of Eunice Waymon. She was very much associated with jazz music, although she really wanted to be a classical musician early in her career, inspired by a love for the music of Bach.

48. Wall fixture : SCONCE
A sconce is a light fixture that today uses electric bulbs, but in the past used candles and torches. The defining feature of a sconce is that it is supported by a wall and does not have a base that stands on the ground. Usually the light is indirect, projected upwards towards the ceiling.

52. Laissez-faire : LOOSE
Laissez-faire is a French term that we use to describe non-interference in the affairs of others. The literal translation is “to let to allow”.

56. Foe of Caesar : CATO
Cato the Younger was a politician in the late Roman Republic, noted for his moral integrity. He is also remembered for an extended conflict with Julius Caesar.

58. What a floozy might show off : GAM
The American slang term “gams” is used for a woman’s legs, but the term goes back to the 18th century “gamb” meaning the leg of an animal on a coat of arms.