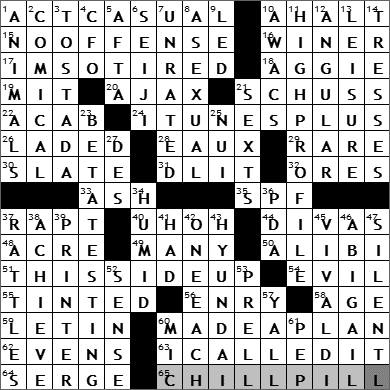 16. Jason who directed 2011’s “Arthur” : WINER
Jason Winer is the director of the 2011 remake of the classic 1981 movie “Arthur”. In the new version, Dudley Moore’s title role is played by the wacky English comic Russell Brand. Jennifer Garner is the love interest, taking on the role played by Liza Minnelli in the original. And, in a nice twist, the role of the manservant previously played by Sir John Gielgud, is portrayed by the fabulous Helen Mirren.

17. Beatles song with a complaining title : I’M SO TIRED
“I’m So Tired” is a track written and sung by John Lennon, from “The White Album” recorded by the Beatles. Lennon wrote the song while suffering from insomnia in India, at a Transcendental Meditation retreat.

18. Utah State athlete : AGGIE
Utah State University in Logan, Utah is one of the many schools that calls its sports teams the “Aggies”.

19. I. M. Pei’s alma mater, for short : MIT
I. M. Pei (full name: Ieoh Ming Pei) is an exceptional American architect, born in China. Of his many wonderful works, my favorite is the renovation of the Louvre in Paris, especially the Glass Pyramid in the courtyard.

20. War hero who killed himself with a onetime rival’s sword : AJAX
As described in Homer’s “Iliad”, Hector was a Trojan prince and a great fighter. During the war with the Greeks, in order avoid a bloody battle, Hector challenges any one of the Greek warriors to a duel. Ajax is chosen by the Greeks, and the two fight for an entire day before they declare a stalemate.

21. Rapid descent on skis : SCHUSS
A schuss is a very fast run downhill, not taking any turns to slow the pace of the descent. “Schuss” is a German word for “shot”.

24. Where purchases cost 69¢, 99¢ or $1.29 : ITUNES PLUS
Much of the music sold over the Internet is encrypted to control access, in a process known as “digital rights management” (DRM). DRM is designed to prevent copyright infringement. Apple now offers a lot of music that is free of DRM, under arrangements negotiated with producers. This DRM-free offering is marketed under the name iTunes Plus.

31. Honorary deg. for many a writer : DLIT
The degree of D. Lit (or more commonly D. Litt) is known as Doctor of Letters, or Doctor of Literature.

33. End of a flick? : ASH
One might flick the ash off the end of one’s cigarette. I think that’s it.

35. Letters at the beach : SPF
In theory, the Sun Protection Factor (SPF) is a calibrated measure of the effectiveness of a sunscreen in protecting the skin from the harmful UV rays of the sun. The idea is that if you wear a lotion with say SPF 20, then it will take 20 times as much UV radiation to cause the skin to burn if using lotion, than without it. I say, just stay out of the sun …

44. Some stars : DIVAS
“Diva” comes to us from Latin, via Italian. “Diva” is the feminine form of “divus” meaning “divine one”. It is used in Italy to mean goddess, or fine lady, and especially is applied to the prima donna in an opera. We often use the term to describe a singer with a big ego.

48. Plot segment : ACRE
At one time, an acre was defined as the amount of land a yoke of oxen could plow in a day. Eventually, this was more precisely delineated as a strip of land one furlong long (660 feet) and one chain wide (66 feet). The word “furlong” is actually derived from the Old English words meaning “furrow long”, the length of the furrow plowed by the oxen.

50. Cover : ALIBI
“Alibi” is the Latin word for “elsewhere”, as in I claim that I was “elsewhere” when the crime was committed … I have an “alibi”.

64. Suit material : SERGE
Serge is a type of twill fabric with diagonal ridges on both sides. The name “serge” comes from the Greek word for “silken”.

6. Conductor Ozawa : SEIJI
Seiji Ozawa is most famous for his work as music director of the Boston symphony Orchestra, although he is also the principal conductor of the Vienna State Opera. He is renowned for wearing a white turtleneck under his dress suit when he conducts, rather than the traditional starched shirt and white tie.

10. ___ plane : AWACS
When the British developed radar in WWII, they also came up with an airborne system that they actually deployed during the war. In 1944 the US Navy commissioned a similar system, and so launched the first American Airborne Early Warning (AEW) system, also before the war was over. The more modern term for the technology is Airborne Warning and Control System, or AWACS for short.

21. Titillating transmissions : SEXTS
“Sexting” (a portmanteau of “sex” and “texting”) is the sending of explicit dialog and perhaps images, between cell phones. The term “sexting” was first coined by the UK’s “Sunday Telegraph Magazine” in a 2005 article. Apparently the practice is “rampant” among teens and young adults. Whatever happened to dinner and a movie?

23. One stage of development : BETA TESTING
In the world of software development, the first tested issue of a new program is usually called the “alpha” version. Expected to have a lot of bugs that need to be fixed, the alpha release is usually distributed to a small number of testers. After reported bugs have been eliminated, the refined version is called a “beta” and is released to a wider audience, but with the program clearly labeled as “beta”. The users generally check functionality and report further bugs that are encountered. The beta version feeds into a release candidate, the version that is tested just prior to the software being sold into the market, bug-free. Yeah, right …

25. Rapa ___ (Easter Island) : NUI
Rapa Nui is the Polynesian name for what we are more likely to call Easter Island. The European name was given to the island by the Dutch explorer Jacob Roggeveen, who came across it on Easter Sunday in the year 1722. Easter Island is inhabited, and is a location that is remarkably distant from neighboring civilization. The nearest inhabited island is Pitcairn Island, almost 1300 miles away.

36. Smartphone, e.g., for short : PDA
A device like perhaps an iPhone or Treo, can be termed a Personal Digital Assistant (PDA).

45. Composer known as the Red Priest : VIVALDI
Antonio Vivaldi was one of the great composers of the Baroque period. He achieved fame and success within in his own lifetime, notoriety that faded soon after he died. His music has reemerged in recent decades and I am sure everyone is familiar with at least part of his most famous composition, the violin concerto called “The Four Seasons”. He was nicknamed “The Red Priest” because he was indeed a priest, and he had red hair.

46. First name of two first ladies : ABIGAIL
Abigail Adams had a unique distinction being married to John Adams. She was the first Second Lady of the US, and became the second First Lady!

Abigail Fillmore, wife of President Millard Fillmore, died of pneumonia just 26 days after she and her husband left the White House. She had the shortest post-Presidential life of any First Lady in the country’s history.

53. Old “Go from flat to fluffy” sloganeer : PRELL
Prell was introduced by Proctor & Gamble in 1947, and was originally a clear, green concentrate sold in a tube (like toothpaste).