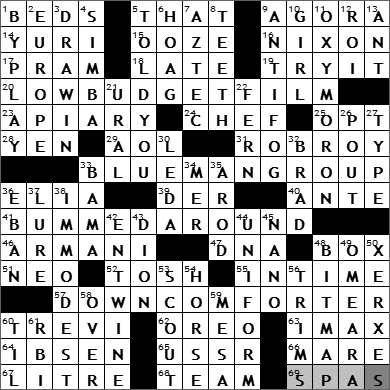 CROSSWORD SETTER: Doug Peterson, Angela Olson Halsted
THEME: Sad Synonyms … each of the theme answers starts with a synonym of the word “sad”:


Today’s Wiki-est, Amazonian Googlies
Across
9. Ancient marketplace : AGORA
In early Greece the agora was a place of assembly. Often the assemblies held there were quite formal, perhaps for the reading of a proclamation. Later in Greek history, things became less formal as the agora evolved into a market place. Our contemporary word “agoraphobia” comes from these agorae, in the sense that a sufferer has a fear of open spaces, a fear of “public meeting places”.

14. Cosmonaut Gagarin : YURI
Yuri Gagarin became the first man in space when his spacecraft, Vostok I, made one orbit of the Earth in 1961. Sadly, Gagarin died only seven years later, in a plane crash.

16. He once placed a “long-distance call” to Aldrin and Armstrong : NIXON
I’ve visited the Richard Nixon Presidential Library a couple of times, and for me the most moving exhibit on display is a framed memo written for the President just before the first moon landing in 1969. The text defined what President Nixon would have to do in the event that Aldrin and Armstrong were not able to take off from the moon. It was planned that he would address the nation. The first words chosen for his address were:

Fate has ordained that the men who went to the moon to explore in peace will stay on the moon to rest in peace.

These brave men, Neil Armstrong and Edwin Aldrin, know that there is no hope for their recovery …

The instructions at the end of the memo read:

AFTER THE PRESIDENT’S STATEMENT, AT THE POINT WHEN NASA ENDS COMMUNICATIONS WITH THE MEN:

A clergyman should adopt the same procedure as a burial at sea, commending their souls to “the deepest of the deep,” concluding with the Lord’s Prayer.

17. Stroller to Soho : PRAM
Another word used in the UK that’s rarely used over here is “pram”, which in my day was the most common term for what is/was called a baby carriage in the US. “Pram” is short for “perambulator”.

18. Like the White Rabbit : LATE
The White Rabbit is the first character that Alice meets from Wonderland, in the famous children’s tale by Lewis Carroll. When Alice sees him, he is running by saying “Oh dear! Oh dear! I shall be too late!” and then she follows him down the rabbit hole.

23. Place getting a lot of buzz? : APIARY
An apiary is an area where bees are kept. The Latin word for “bee” is “apis”.

28. Hankering : YEN
The word “yen”, meaning “urge”, has been around in English since the very early 1900s. It comes from the earlier word “yin” imported from Chinese. ”Yin” was used in English to describe an intense craving for opium!

31. Drink named after a Scottish hero : ROB ROY
Rob Roy’s full name was Robert Roy McGregor, itself an Anglicization of the Scottish Raibeart Ruadh. He gave his name to the famous cocktail, a relative of the Manhattan, made with Scotch instead of bourbon.

33. Unusually chromatic performance ensemble : BLUE MAN GROUP
I had the pleasure of seeing the Blue Man Group perform live in Las Vegas a few years ago, and I thoroughly recommend the show. The group was formed by three men in 1987 in New York City, focusing on playing PVC instruments while wearing fabulous blue makeup. The show is much more elaborate these days, but the PVC percussion instruments still feature prominently.

36. Director Kazan : ELIA
Elia Kazan won Oscars for best director in 1948 for “Gentleman’s Agreement” and in 1955 for “On The Waterfront”. In 1999, he was given an Academy Lifetime Achievement Award.

39. “___ Rosenkavalier” : DER
“Der Rosenkavalier” is a comic opera composed by Richard Strauss, with the title translating as “The Knight of the Rose”.

46. Valentino rival : ARMANI
Giorgio Armani is an Italian fashion designer and founder of the company that bears his name since 1975. Although Armani is famous for his menswear, the company makes everything from jewelry to perfume.

47. Crime scene evidence : DNA
Forensic scientists use DNA, usually taken from blood, semen, skin, saliva or hair follicles. Often DNA left at a crime scene can be used to identify a perpetrator of a crime, in a process called genetic fingerprinting.

48. Engage in pugilism : BOX
“Pugilism”, another word for “boxing”, comes from the Latin “pugil” meaning “boxer”. In turn, “pugil” derives from “pugnus”, the word for “fist”.

51. Prefix with conservative : NEO-
By definition, a neoconservative supports the use of American power and military to bring democracy, liberty, equality and human rights to other countries.

60. “Three Coins in the Fountain” fountain : TREVI
The Trevi Fountain is a huge fountain in Rome, the largest constructed in the Baroque style. The tradition is that if one throws a coin in the fountain, one is guaranteed a return visit to the city one day. Tourists throw in an amazing 3,000 euros (over $4,000) every day. The money is collected and is used to stock a supermarket for the needy of the city.

62. McFlurry flavor : OREO
The McFlurry is the ice cream dessert from McDonald’s. Would you believe that it is mixed on a machine with the mixing blade then doubling as a spoon with which one eats it?

63. Movie format for a big date? : IMAX
The IMAX Corporation, which is behind the IMAX film format, is a Canadian company. The impetus for developing the system came after Expo ’67 in Montreal. Back then large format screenings were accomplished using multiple projectors with multiple screens, with images basically stitched together. The team behind the IMAX technology set out to simplify things and developed a single-camera, single-projector system.

64. “Peer Gynt” writer : IBSEN
Henrik Ibsen’s play “Peer Gynt” is based on a Scandinavian fairy tale “Per Gynt”. The incidental music to the play, written by Edvard Grieg, is some of the most approachable classical music every written, at least in my humble opinion …

65. Country with a hammer-and-sickle flag, for short : USSR
The Soviet flag has three symbols:

69. Resorts : SPAS
The word “spa” migrated into English from Belgium, as Spa is the name of a health resort there. The name “Spa” comes from the Walloon word “espa” meaning “spring, fountain”.

Down
2. The Continent : EUROPE
People living in the British Isles, often refer to mainland Europe as “the Continent”.

4. Swahili for “lion” : SIMBA
Simba is the main character in the Disney animated feature, “The Lion King”. “Simba” is the Swahili word for “lion”.

6. Romance novelist Tami : HOAG
Tami Hoag is a novelist best known for writing romances and thrillers. She is a prolific writer, and once had five consecutive titles on the New York Times bestsellers list, all in a 20-month period.

7. Early Mexican : AZTEC
The Aztec people of Central America dominated the region in the 14th – 16th centuries. Two traits of the Aztec people are oft cited today. They built some magnificent pyramids, and they also engaged in human sacrifice. The two traits were linked in a way … for the consecration of the Great Pyramid of Tenochtitlan, 84,400 prisoners were sacrificed over a period of four days.

11. Military intelligence, e.g., according to George Carlin : OXYMORON
The word “oxymoron” is in itself an oxymoron, as it is derived from the Greek words “Oxys” and “moros” meaning “sharp” and “stupid”.

13. Grasshopper’s partner in an old fable : ANT
“The Ant and the Grasshopper” is one of Aesop’s fables.

Aesop lived in Ancient Greece, probably around the sixth century BC. Supposedly he was born a slave, somehow became a free man, but then met with a sorry end. He was sent to the city of Delphi on a diplomatic mission but instead insulted the Delphians. He was tried on a trumped-up charge of stealing from a temple, sentenced to death and was thrown off a cliff.

21. Caspian Sea feeder : URAL
The Ural River rises in the Ural Mountains in Russia, and flows for half its length through Russian territory until it crosses the border into Kazakhstan, finally emptying into the Caspian Sea.

30. Mother of Castor and Pollux : LEDA
In Greek mythology, Leda was the beautiful Queen of Sparta who was seduced by Zeus, in the form of a swan. She produced two eggs from the union. One egg hatched into the beautiful Helen, later to be known as Helen of Troy over whom the Trojan War was fought. The other egg hatched into the twins Castor and Pollux. Castor and Pollux had different fathers in the myth. Pollux was the son of Zeus, so was immortal, while Castor was the son of Leda’s earthly husband, and so was a mortal man.

32. Country music’s Paisley : BRAD
Brad Paisley is a country singer whose music has some rock influences.

33. The Crimson Tide, familiarly : BAMA
The athletic teams of the University of Alabama are nicknamed the Crimson Tide, a reference to the team colors, crimson and white.

35. Longtime Yankee third baseman, informally : A-ROD
Poor old Alex Rodriguez earned more nicknames than just A-Rod. He has been called “the Cooler” by some players as there is a perception that teams go cold when he joins them, and hot when he leaves. He has also been called “A-Fraud” by teammates because of another perception, that he is over-demanding.

36. Israel’s Abba : EBAN
Abba Eban was an Israeli diplomat and politician, born Aubrey Solomon Meir Eban in Cape Town, South Africa. While working at the United Nations after WWII he changed his name to “Abba”, the Hebrew word for “father”, reportedly as he could see himself as the father of the nation of Israel.

43. The Belmonts’ frontman, in 1950s music : DION
Perhaps the biggest hits for Dion and the Belmonts were “A Teenager in Love” and “The Wanderer”.

45. Modern running companion? : NANO
The iPod Nano is the successor to the iPod Mini, and was introduced to the market at the end of 2005. There have five versions of the Nano to date and the current Nano as well as playing tunes is an FM player, records voice memos, and even has a pedometer!

49. Mark who was the 1998 P.G.A. Player of the Year : O’MEARA
Mark O’Meara is an American golfer from Goldsboro, North Carolina. He is known as one of the American players who competes in international tournaments more than most, and has a reputation as a real gentleman all around the world.

The Battle of Thermopylae took place in 480 BC, fought between the Persian Empire of Xerxes and an alliance of Greek city-states led by Sparta. The Greeks chose the narrow pass of Thermopylae to make a stand against the advancing Persian army, as there they could minimize the advantage that the Persians had with their vast number of soldiers. The pass of Thermopylae was so narrow that only one chariot could pass through at a time. Famously, the greatly outnumbered Spartan forces held this pass with hand-to-hand combat for two full days, until a local resident showed the Persians a way around the pass so that the Greek army could be attacked and annihilated from the rear.

54. Contender in the Belmont : HORSE
The Belmont Stakes is a horse race held in June each year, at Belmont Park racetrack in Elmont, New York. The Belmont is the last of the US Triple Crown races, following the Kentucky Derby and the Preakness.

59. Maricopa County city : MESA
The city of Mesa, Arizona is in effect a suburb of Phoenix.