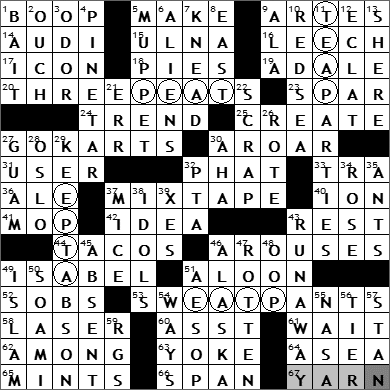 CROSSWORD SETTER: Joseph Samulak
THEME: MIX TAPE … all the theme answers contain four letters that are circled in the grid. The four letters are the same as those in the word TAPE, but he order is given a MIX:

20A. 1990s runnings of the Bulls? : THREE-PEATS
37A. Homemade music compilation … or a hint to the circled letters : MIXTAPE
53A. Some gymwear : SWEATPANTS
11D. Groups battling big government : TEA PARTIES
29D. Watch : KEEP TABS ON

1. Betty of comics : BOOP
Betty Boop made her first appearance on the screen in 1930, in a cartoon called “Dizzy Dishes”. Her character was modeled on the the It-girl, the sexy Clara Bow of movie fame. Back then Betty Boop was a sexy poodle, and it wasn’t until 1932 that she morphed into completely human form. Betty was quite the risqué figure, but her vampish ways only lasted a few years. When the Production Code of 1934 came into force, Betty started to dress more modestly, and toned down her behavior.

14. Car whose logo has four rings : AUDI
The Audi name has an interesting history. The Horch company was founded by August Horch in 1909, but soon after, Horch was forced out of his own business. He set up a new company and continued to use his own name as a brand. The old company sued him for using the Horch name so a meeting was held to choose something new. Horch’s young son was studying Latin in the room where the meeting was taking place. He pointed out that “Horch” was German for “hear”, and he suggested “Audi” instead, the Latin for “listen”. Don’t hear … just listen …

17. Che Guevara or Lady Gaga : ICON
Ernesto “Che” Guevara was born in Argentina, and in 1948 started to study medicine at the University of Buenos Aries. While at school he satisfied his need to “see the world” by taking two long journeys around South America, the story of which are told in Guevara’s memoir later published as “The Motorcycle Diaries”. While travelling, Guevara was moved by the plight of the people he saw and their working conditions and what he viewed as capitalistic exploitation. In Mexico City he met brothers Raul and Fidel Castro and was persuaded to join their cause, the overthrow of the US-backed government in Cuba. He rose to second-in-command among the Cuban insurgents, and when Castro came to power Guevara was influential in repelling the Bay of Pigs Invasion and bringing Soviet nuclear missiles to the island. Guevara left Cuba in 1965 to continue his work as a revolutionary. He was captured by Bolivian forces in 1967, and was executed. Fidel Castro led the public mourning of Guevara’s death, and soon the revolutionary was an icon for many left-wing movements around the world.

I’ve seen Lady Gaga interviewed on television a few times, and she sure is “unique”. Her music is of course out of my league, but she does know how to put on a show.

18. Desserts akin to cobblers : PIES
The dessert called “cobbler” originated in colonial America when settlers invented it as a substitute for suet pudding as they didn’t have the necessary ingredients to make the more traditional dish. Instead, they stewed fruit and covered it with a layer of uncooked scones or biscuits, creating a surface that resembled a “cobbled” street, hence the name.

20. 1990s runnings of the Bulls? : THREE-PEATS
A “three-peat” is the winning of a sports championship three seasons in a row.

36. Word after ginger or brown : ALE
The brand most closely associated with ginger ale is Canada Dry. “Canada Dry Pale Ginger Ale” was first formulated in 1904 by a Canadian chemist called John McLoughlin from Ontario, Canada. Prohibition helped sales of the drink as it was particularly effective in masking the taste of illegally-produced homemade liquor.

49. Queen who financed Columbus, to the Spanish : ISABEL
Queen Isabella I of Castile was recognized as a formidable soveriegn, and was perceived as a joint ruler with her husband, King Ferdinand II of Aragon. The pair united their two kingdoms in a move that heralded the unification of Spain.

51. Crazy as ___ : A LOON
The slang term “loon” for a deranged person probably comes from the loud cry of the bird, the loon (which dives), but is also influenced by the word “lunatic”.

63. Harness for oxen : YOKE
A yoke is that wooden beam used between a pair of oxen so that they are forced to work together.

Down
4. Application to improve a batter’s grip : PINE TAR
Pine tar is applied to the handles of baseball bats as it is a sticky substance and improves the batter’s grip. In a 1983 game, the Yankees manager Billy Martin protested a home run hit by George Brett of the Royals because the pine tar on his bat extended beyond the regulation 18 inches. The home run was later allowed as it was determined that the 18-inch rule was in place for economic reasons, and had nothing to do with competitive advantage. If pine tar gets on a baseball it renders it unusable for play, and baseballs cost money!

5. Bert or Ernie : MUPPET
I’ve always believed that the “Sesame Street” characters Bert and Ernie were named after two roles played in the Christmas classic “It’s a Wonderful Life”. In the movie, the policeman’s name is Bert, and his taxi-driving buddy is named Ernie. However, the “Sesame Street” folks have stated that the use of the same names is just a coincidence.

10. One end of the Suez Canal : RED SEA
The Red Sea (sometimes called the Arabian Gulf) is a stretch of water lying between Africa and Asia. The Gulf of Suez (and the Suez Canal) lies to north, and the Gulf of Aden to the south.

11. Groups battling big government : TEA PARTIES
The Tea Party Caucus in the US Congress is chaired by Minnesota Representative Michele Bachmann. The stated focus for the caucus is fiscal responsibility and limited government, while adhering to the groups interpretation of the US Constitution. Top contributors to the caucus are health professionals, retirees, the real estate industry and oil and gas interests.

12. Brilliance : ECLAT
Éclat can mean a brilliant show of success, or the applause or accolade that one receives. The word derives from the French “éclater” meaning “to splinter, burst out”.

13. ___ Khan (“The Jungle Book” tiger) : SHERE
In Rudyard Kipling’s “Jungle Book”, he calls his regal tiger character “Shere Khan”. Kipling chose this name as he had met an Afghan Prince in his travels called “Sher Shah Suri”, meaning “The Lion or Tiger King”.

27. U.S. territory in W.W. II fighting : GUAM
Guam is a US territory in the western Pacific Ocean, the largest of the Mariana Islands. Guam is also the first territory in the United States to see the sun rise on any particular day. As such, it has adopted the motto, “Where America’s day begins”. During WWII, the US territory of Guam was occupied by the Japanese for 31 months until it was liberated in the Battle of Guam in July 1944. Of the 18,000 Japanese men holding the island, only 485 surrendered, so almost all perished in the invasion. One Japanese sergeant hid out on the island for an incredible 28 years, finally surrendering in 1972!

28. Norway’s capital : OSLO
Oslo is an ancient city, founded around 1048. The medieval city was destroyed by fire in 1624 and was rebuilt by the Danish-Norwegian King Christian IV and renamed Christiana. In 1877, there was an official change of the name’s spelling to Kristiana, and then more recently in 1925 the name was restored to the original Oslo. Things have gone full circle, as the center of Oslo, the area that would have been contained by the original medieval walls, has recently been renamed Christiana.

30. “Eureka!” : AHA
Eureka translates from Greek as “I have found it”. The word is usually associated with Archimedes,  uttered as he stepped into his bath one day. His discovery was that the volume of water that was displaced was equal to that of the object (presumably his foot) that had been submerged. He used this fact to determine the volume of a crown, something he needed to determine if it was made of pure gold or was a forgery.

34. Kennedy matriarch : ROSE
Rose Fitzgerald Kennedy was the mother of President John F. Kennedy, and eight other children.She lived to a very ripe old age, passing away in 1995 when she was 104 years old.

35. Tidbits for aardvarks : ANTS
The aardvark is the oddest looking of creatures, a nocturnal burrowing animal, native to Africa. The name “aardvark” is Afrikaans for “earth pig”, although it is not in fact related to the pig. Aardvarks are noted, among other things, for their unique teeth. Their teeth have no enamel and wear away quite readily, but continuously regrow.

49. Ayatollah’s faith : ISLAM
An Ayatollah is a high-ranking cleric in the Muslim faith, roughly equivalent to a Bishop or a Cardinal in the Roman Catholic tradition, or to a Chief Rabbi in Judaism.

51. “The Fox and the Grapes” storyteller : AESOP
Aesop lived in Ancient Greece, probably around the sixth century BC. Supposedly he was born a slave, somehow became a free man, but then met with a sorry end. He was sent to the city of Delphi on a diplomatic mission but instead insulted the Delphians. He was tried on a trumped-up charge of stealing from a temple, sentenced to death and was thrown off a cliff.