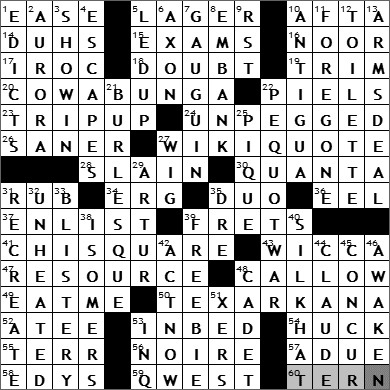 
Today’s Wiki-est, Amazonian Googlies
Across
1. Adroitness : EASE
The French for “to the right” is “à droit”, from which we get our word “adroit”. The original meaning of “adroit” was “rightly, properly”, but it has come to mean dexterous and skillful.

5. 22-Across product : LAGER
Lager is so called because of the tradition of cold storing the beer during fermentation. “Lager” is the German word for “storage”.

16. Queen with a degree from Princeton : NOOR
Queen Noor is the widow of King Hussein of Jordan. Queen Noor was born Lisa Halaby in Washington, D.C., the daughter of Najeeb Halaby. Her father was appointed by President Kennedy as the head of the Federal Aviation Administration, and later became the CEO of PanAm. Lisa Halaby met King Hussein in 1977, while working on the design of Jordan’s Queen Alia Airport. The airport was named after King Hussein’s third wife who had been killed that year in a helicopter crash. Halaby and the King married the next year, in 1978.

17. ___-Z : IROC
The IROC-Z is a model of Camaro, introduced in 1978. The IROC-Z takes its name from the famous stock car race, the International Race of Champions.

20. “Gnarly waves, dude!” : COWABUNGA
“Cowabunga” is an exclamation adopted by surfers in the sixties. The original use of “cowabunga” was on television, a catchphrase of Chief Thunderhead in “The Howdy Doody Show” in the fifties. The term got even more exposure in the nineties when it was adopted by the “Teenage Mutant Ninja Turtles”.

22. Pabst brand : PIELS
The Piels Brewery in Brooklyn was founded by the three Piels brothers back in 1883. It must have been a great place to work, because Piels employees were apparently guaranteed cold beer on tap 24 hours a day by virtue of their union contract.

24. Like some exchange rates : UNPEGGED
When an exchange rate is unpegged, this means that the currencies in question float freely on the market, with the rate of exchange being determined by demand for one currency over another. A government might choose to peg its currency with another, fixing the exchange rate. The US dollar is often chosen as the currency to which others are pegged.

27. Where to get a citation while surfing : WIKIQUOTE
Wikiquote is a sister project to the famous Wikipedia. As one would expect from the name, Wikiquote is a vast reference of quotations.

31. Hang-up : RUB
The oft-quoted phrase “there’s the rub”, comes from Hamlet’s famous “To be or not to be” soliloquy:

A “rub” is a difficulty or obstruction. The usage predates Shakespeare, and comes from the game of lawn bowls, in which a rub is a fault in the bowling surface.

34. Watt-hour fraction : ERG
An erg is a unit of energy, or mechanical work. “Erg” comes from the Greek word “ergon”, meaning “work”.

36. You might get a charge out of it : EEL
Electrophorus electricus is the biological name for the electric eel. Despite its name, the electric “eel” isn’t an eel at all, but rather what is called a knifefish, a fish with an elongated body and related to the catfish. The electric eel has three pairs of organs along its abdomen, each capable of generating an electric discharge. The shock can go as high as 500 volts with 1 ampere of current (that’s 500 watts), and that could perhaps kill a human.

39. They’re lined up on a neck : FRETS
A fret is a metal strip embedded in the neck of a stringed instrument like a guitar. The fingers press on the frets, shortening the strings, and changing the note played by the strings. The note increases by one semitone as the the fingers shorten each string by one fret.

41. Kind of test associated with the null hypothesis : CHI-SQUARE
Chi-square tests are used in the world of statistics. That’s all I know!

48. Wet behind the ears : CALLOW
“Callow” means “immature”. The word derives from the Old English “calu”, meaning “bare” and “bald”. The usage relates to young birds that lack feathers.

Someone who is “wet behind the ears” is young and immature. The expression is thought to derive from the fact that newborns enter the world covered with amniotic fluid. Perhaps the area behind the ears is the last to dry off.

49. Directive obeyed by Alice : EAT ME
In Lewis Carroll’s “Alice’s Adventures in Wonderland”, Alice follows the white rabbit down a rabbit hole and finds a bottle labelled “DRINK ME”. When she drinks the contents, it causes her to shrink. She also sees a cake adorned with the words “EAT ME”, and when she does so she grows so big she finds it hard to stand up. After eating the cake, she says the famous words, “Curiouser and curiouser”.

50. City where “Smokey and the Bandit” begins : TEXARKANA
Texarkana is the name given to the twin cities of Texarkana, Texas and Texarkana, Arkansas that sit either side of the state line between Texas and Arkansas. The name of “Texarkana” was given when the settlement was founded at the junction of two railroads in 1873. Back then, it was believed that the new city would be not only on the borders of Texas (TEX) and Arkansas (ARK) but also on the border of Louisiana (ANA), giving the city its name. The Louisiana state line was eventually set about 30 miles away, but the -ANA suffix was retained.

“Smokey and the Bandit” is a 1977 comedy action film starring Burt Reynolds as “the Bandit” and Jackie Gleason as “Smokey Bear”.

54. Pap’s son, in literature : HUCK
“The Adventures of Huckleberry Finn” by Mark Twain was first published in 1884, not here in the US but rather in England. The original launch planned for the US had to be delayed until 1885, because some rascal had defaced the plate for one of the illustrations, making an obscene joke. Once the problem was spotted a new plate had to made, and 30,000 copies already printed had to be reworked to cover up the obscenity.

58. Brand that has Dibs : EDY’S
Dreyers’ ice cream sells its products under the name Dreyers in the Western United States, and Edy’s in the Eastern states. The company’s founders were William Dryer and Joseph Edy.

2. Polar region phenomenon : AURORA
The spectacular aurora phenomenon is seen lighting up the night sky at both poles of the earth (the Aurora Borealis in the north, and the Aurora Australis in the south). The eerie effect is caused by charged particles colliding with atoms at high latitudes.

6. Impulse carrier : AXON
A nerve cell is more correctly called a neuron, and the long nerve fiber that is part of the neuron is called the axon.

7. Van Gogh threatened him with a razor blade : GAUGUIN
Gauguin visited Van Gogh in Arles in 1888. While there, the two argued quite violently, with Van Gogh eventually threatening his friend with a razor blade. In a panic, Van Gogh fled the house and made his way to a local brothel. Famously, that night he cut off his own left ear.

10. St. John’s is its capital : ANTIGUA
Antigua is an island in the West Indies, and is the main island of the country of Antigua and Barbuda. These twin islands take their names from the Spanish for “ancient” and “bearded”.

12. Grooming routine : TOILETTE
A French person when dressing is said to be attending to her “toilette”.

21. Tom Stoppard’s “Travesties,” e.g. : BURLESQUE
Sir Tom Stoppard is a British playwright, his most famous work probably being “Rosencrantz and Guildenstern Are Dead” (which I saw years ago, and slept through!). He also writes screenplays, and was co-writer for the 1998 movie “Shakespeare in Love”.

22. Chief Sassacus led one side in it : PEQUOT WAR
The Pequot War was fought between the Pequot tribe and an alliance of European colonies and other American Indian tribes, from 1634 to 1638.

25. Nettle : PIQUE
Our word “pique” meaning a “fit of ill feeling” is a French word meaning a “prick, sting, irritation”.

29. Pianist Schnabel : ARTUR
Artur Schnabel was a classical pianist from Austria, best known for his recording of Beethoven’s piano sonatas.

35. Producer for 50 Cent, familiarly : DRE
Dr. Dre is the stage name of rapper Andre Romelle Young. He is perhaps as well known for his own singing career as he is for producing records and starting the careers of others such Snoop Dog, Eminem and 50 Cent.

Rap star 50 Cent’s real name is Curtis James Jackson III, and is from South Jamaica in Queens, New York. 50 Cent had a rough life starting out, first dealing drugs at the age of 12. He dropped his illegal activities to pursue a rap career, but still fell victim to an assailant who pumped nine bullets into him. The alleged shooter was himself shot three weeks later, and died. 50 Cent’s alleged attacker was a bodyguard and close friend of Mike Tyson.

38. Atomically related compounds : ISOMERS
In the world of chemistry, isomers are two compounds with same chemical properties and the same atomic constituents, but with a slightly different arrangement of the atoms relative to each other.

39. Prize in Cracker Jacks, e.g. : FREEBIE
Cracker Jack snack food was introduced to the public at the 1893 Chicago World Fair. It didn’t get the name “Cracker Jack” until a few years later when someone declared to the producers that the candied snack was “crackerjack!”. Prizes were introduced into each box starting in 1912.

44. Rains in a studio : CLAUDE
Claude Rains was an English actor, famous for playing some classic roles on the Hollywood screen. His most recognized part has to be that of Captain Renault in 1942’s “Casablanca”.

51. MTV generation : XERS
The term Generation X originated in the UK, the name of a book by Jane Deverson. Her book detailed the results of a study of British youths in 1964, contrasting their lifestyle to those of previous generations. It was Canadian author Douglas Coupland who was responsible for popularizing the term, with his more successful publication “Generation X: Tales for an Accelerated Culture”. By the latest accepted definition, Gen-Xers were born between 1961 and 1981.