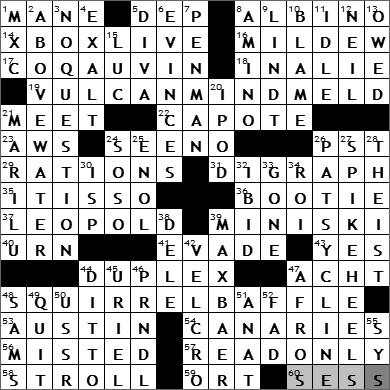 17. French chef’s specialty : COQ AU VIN
The French word “coq” actually means rooster, but a more tender bird is usually chosen for the classic French dish “coq au vin”. The most common wine used for the “vin” is burgundy, but sometimes another red wine is chosen, and you can also find on a menu “coq au Champagne” and “coq au Riesling”.

19. Sharing of thoughts on a TV show? : VULCAN MIND MELD
Mr. Spock was the first to show us the Vulcan mind meld, on the original “Star Trek” series. Vulcans have the ability to meld with the minds of other Vulcans, and indeed humans, in order to see what what’s “going on” in the other individual’s mind.

22. He said Beat literature “isn’t writing at all – it’s typing” : CAPOTE
Jack Kerouac and Allen Ginsberg were part of the Beat Generation, American writers who embraced the beat culture of the fifties. The term “Beat Generation” was coined by Karouac back in 1948, describing the youth of the day who had been “beaten down” and who were refusing to conform to the social norms of the time. The beatniks of the fifties, were to morph into the hippies of the sixties.

The larger than life Truman Capote was a celebrated author and comedian. He is perhaps most associated with his novella “Breakfast at Tiffany’s” and his true crime novel “In Cold Blood”. Truman Capote grew up in Monroeville, Alabama. There he met, and became lifelong friends with, fellow novelist Harper Lee. Capote was the inspiration for the character “Dill” in Lee’s celebrated work “To Kill a Mocking Bird”. In turn, Harper Lee was the inspiration for the character “Idabel” in Capote’s “Other Voices, Other Rooms”.

Local solar time was replaced with standard time zones with the increasing use of rail travel and telecommunications, as the variations in local solar times became very inconvenient. Time zones in the US vary in hourly increments, but in some parts of the world a 30-minute or even 15-minute difference can apply.

37. One of three Belgian kings : LEOPOLD
There have been three kings of Belgium named Leopold. Leopold I was the first king of the Belgians after the country gained independence from the Netherlands in 1831. He was an uncle of Queen Victoria of the UK. Leopold II is most associated with the harsh Belgian regime responsible for the deaths of millions of people in the Congo Free State in Africa. Leopold III reigned from 1934-1951. He was a controversial character during WWII and faced a charge of treason after the war from which he was exonerated. Leopold III succumbed to political pressure and abdicated in 1951.

48. Bird feeder protector : SQUIRREL BAFFLE
A squirrel baffle is a device designed to deter squirrels and other small mammals from climbing up the pole supporting a bird feeder.

53. Powers on one’s screen? : AUSTIN
The character of Austin Powers was created by the actor who plays him, Mike Myers. Apparently Myers came up with the idea for Powers while listening to the Burt Bacharach song “The Look of Love”.

Down
5. She may try an agent : DIVA
“Diva” comes to us from Latin, via Italian. “Diva” is the feminine form of “divus” meaning “divine one”. It is used in Italy to mean goddess, or fine lady, and especially is applied to the prima donna in an opera. We often use the term to describe a singer with a big ego.

8. Essential acid : AMINO
Amino acids are essential to life in many ways, not least of which is their use as the building blocks of proteins.

9. Luxury Swiss chocolatier : LINDT
The delicious Swiss chocolate sold under the Lindt brand name has its origins in a small confectionery store in Zurich in the 1840s. Lindt purchased our local chocolate company here in San Francisco, Ghirardelli, back in 1998.

15. 19-season N.H.L.’er Robitaille : LUC
Luc Robitaille is a retired professional hockey player, mostly known for his career with the Los Angeles Kings. He holds the record as the highest-scoring left winger in the history of the NHL.

20. Touch, e.g. : IPOD
The iPod Touch is a portable media player, personal digital assistant and gaming console with a WiFi capability. Essentially I think it’s a stripped-down version of an iPhone.

21. Player of Elaine on “Taxi” : MARILU
As an actress, Marilu Henner’s most celebrated role was as Elaine O’Connor Nardo on “Taxi”. Henner has a condition called a Superior Autobiographical Memory. This means that she can recall information and events that took place on every day of her life, starting from a very early age.

25. Form of pyruvic acid : ENOL
Pyruvic acid is an intermediate in the metabolic processes in the human body.

26. “Sentimentally Yours” singer : PATSY CLINE
Patsy Cline was a country music singer, who managed to cross over into the world of pop music where she enjoyed great success. Cline is one of a long list of musical legends who died in plane crashes. Cline was 30 years old when was killed in 1963, in a Piper Comanche plane piloted by her manager Randy Hughes. Hughes and Cline decided to make that last flight despite warnings of inclement weather, and it was a severe storm that brought down the plane in a forest outside Camden, Tennessee.

30. DSL purveyor : ISP
An Internet Service Provider (ISP) is just what its name indicates, a company that provides its customers with access to the Internet. One way that ISPs differentiate themselves from each other is in the way that the end users are connected to the ISPs network. So, there are cable ISPs, DSL ISPs, dial-up ISPs and satellite ISPs. I’d go with cable if I were you, if it’s available in your area …

32. Sourcing abbr. : IBID
Ibid. is short for the Latin word “ibidem” and is typically found in footnotes and bibliographies. Ibid. is used to refer the reader to the prior citation, instead of giving the same information (title, author etc.) all over again.

38. Get out of a sentence? : DELE
Dele is the editorial instruction to delete something from a document, and is often written in red.

39. Heavyweight champ before James J. Braddock : MAX BAER
Max Baer was an American Heavyweight Champion of the World in the thirties. He held the title for 364 days, and then went into the ring after hardly training at all against the well-prepared James J. Braddock. Braddock was a huge underdog, and yet emerged victorious after 15 rounds (Braddock is the subject of the 2005 movie “Cinderella Man”). By the way, Baer’s son is Max Baer, Jr., the actor who played Jethro on “The Beverly Hillbillies”.

42. Option for sneakers : VELCRO
The hook-and-loop fastener we now call Velcro was invented in 1941 by Georges de Mestral, a Swiss engineer. He noticed that the seeds of the burdock plant (burrs or burs) stuck to his clothes. Under the microscope he found hooks on the burrs, grabbing hold of loops in his clothing. After years of development, he came up with a way of simulating the natural hook using man-made materials.

44. “Put me down, too” : DITTO
“Ditto” was originally used in Italian (from Tuscan dialect) to avoid repetition of the names of months in a series of dates. It’s just another wonderful import from that lovely land …

45. Angel of the south wind : URIEL
Uriel is one of the archangels in Jewish and Christian traditions.

46. Shifting letters : PRNDL
That would be Park, Reverse, Neutral, Drive and Low.

50. Erstwhile empire, in brief : USSR
The former Soviet Union was created in 1922, not long after the Russian Revolution of 1917 that overthrew the Tsar. The new Soviet Union was roughly equivalent geographically to the old Russian Empire, and was comprised of fifteen Soviet Socialist Republics.