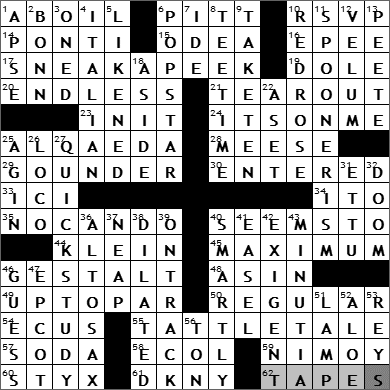 6. The Panthers of the N.C.A.A. : PITT
The University of Pittsburgh chose its nickname for its sporting teams in 1909, and claims that it was the first team in the country to adopt the name “Panthers”.

14. “Doctor Zhivago” producer : PONTI
The Italian film producer Carlo Ponti was not quite as famous as his celebrity wife, Sophia Loren. Ponti met Loren as a contestant in a beauty contest he was judging in 1950. Back then she was a budding young actress still using her real name, Sofia Lazzaro. The two married in 1957 even though divorce was illegal at the time in Italy, so Ponti was still married to his first wife.

15. Drama halls : ODEA
In Ancient Greece, an odeon was like a small theater, with “odeon” literally meaning a “building for musical competition”. Odea were used in both Greece and Rome, for entertainments such as musical shows and poetry readings.

16. Electric weapon : EPEE
The French word for sword is épée. In competitive fencing the épée is connected to system that records an electrical signal when legal contact is made on an opponent’s body.

19. Charity allotment : DOLE
The word “dole”, meaning “financial relief”, originated as the Old English word “dal”, the state of sharing, giving out. Our term “on the dole”, relating to institutional relief, dates back to the twenties.

25. Fundamentalist group : AL-QAEDA
Osama bin Laden founded his militant Islamist group called al-Qaeda in the late eighties. “Al-Qaeda” translates as “the base”, and can refer to a military base, and was originally the name of a training camp set up for mujaheddin fighters opposing Russians occupying Afghanistan.

28. “With Reagan” writer : MEESE
Ed Meese was born in Oakland, California, just down the road here, and spent 24 years in the office of the Treasurer of Alameda County, the county in which I live. After military service he earned himself a law degree at UC Berkeley. Later, as Chief of Staff for President Reagan, he was instrumental in a famous decision to crack down on student protesters at Berkeley which resulted in one protester dying and a two-week occupation of the city by the California National Guard.

44. Name on some underwear : KLEIN
Calvin Klein is an American fashion designer, born in the Bronx in New York City. Klein’s biography entitled “Obsession”, takes its name from one of the most famous brands in his line of fragrances.

46. It exceeds the sum of its parts : GESTALT
Gestalt is a German word meaning “shape”. The principles of gestaltism were developed in Germany in the early 1900s. One of the main tenets is that “the whole is greater than the sum of the parts”.

54. Currency dropped during the French Revolution : ECUS
The ecu was an Old French coin. When introduced in 1640 it was worth three livres (an older coin, called a “pound” in English). The word “ecu” comes from the Latin “scutum” meaning “shield”. The original ecu used to have a coat of arms on it, a shield.

55. Scorned kid brother, maybe : TATTLE-TALE
A tattle-tale is someone who tells tales, not a nice person. Fels-Naptha soap brand first used the term to describe a gray tinge that was left after laundering whites, the idea being that the gray indicated that the laundress (yes, it was the wives who were blamed back then!) was using an inferior laundry soap to wash the man’s white shirts. Fels-Naptha claimed that “white shirts, meant happy husbands”. Oh boy …

57. Fizz ingredient : SODA
A cocktail known as a Fizz includes by definition lemon or lime juice, and carbonated water. The most popular of the genre is the Gin Fizz, made from 3 parts gin, 2 parts lemon juice, 1 part sugar syrup and 5 parts soda water.

59. Player of a stoic crew member : NIMOY
Leonard Nimoy played the logical Mr. Spock on the original “Star Trek” television series. He has to be the most popular character on the show, and keeps popping up in “Star Trek” spin offs to this day. Nimoy first worked alongside William Shatner (Captain Kirk) in an episode of “The Man from U.N.C.L.E.” (I loved that show!), with Nimoy playing a bad guy, and Shatner an U.N.C.L.E. recruit.

60. Gods swear by it : STYX
In Greek mythology, gods would swear oaths on the River Styx, meaning that such an oath was binding.

The River Styx in Greek mythology was the river that formed the boundary between the Earth and the Underworld (also called Hades). The souls of the newly dead had to cross the River Styx in a ferryboat piloted by Charon. Traditionally, a coin would be placed in the mouths of the dead “to pay the ferryman”.

61. Inits. on some underwear : DKNY
Donna Karan is an American fashion designer, creator of the DKNY clothing label. She was raised in the fashion industry, as her mother was a model and her stepfather a tailor.

Down
1. Religious recession? : APSE
The apse of a church or cathedral is a semicircular recess in an outer wall, usually with a half-dome as a roof, and often where there resides an altar. Originally, apses were used as burial places for the clergy and also for storage of important relics.

2. Bygone European capital : BONN
After WWII, Bonn was chosen as the capital of West Germany, a choice promoted by Chancellor Konrad Adenauer who was from the area. After German reunification, the capital was moved to Berlin.

6. Prince, e.g. : POP STAR
The singer Prince was born in Minneapolis, and he lives there to this day. He took his name from his father, a jazz musician who used the stage name Prince Rogers.

7. Periodic table suffix : -IDE
I don’t think the suffix -ide is found in the Periodic Table of the Elements. In chemistry, when a metal combines with a non-metal, the non-metal is often the suffix -ide as in iron sulfide, for example.

11. Trump the jack, e.g. : SPOONERISM
If “trump the jack” is a spoonerism then the speaker meant to say “jump the track”.

Spoonerisms are errors in speech in which letters or sounds are switched from one word to another. Famous examples are, “Three cheers for our queer old dean” (dear old Queen … Victoria) and “Is it kisstomary to cuss the bride?” (customary to kiss). Spoonerisms are named after an Oxford don, William Archibald Spooner, who was notorious for his tendency to pepper his speech with “spoonerisms”.

13. Most successful U.S. black golfer before Woods : PEETE
Calvin Peete was the most successful African American golfer on the PGA tour before Tiger Woods hit the circuit. Peete played on the Ryder Cup teams of 1983 and 1985.

18. Obiter dictum : ASIDE
“Obiter dictum” is Latin for something “said by the way”. The term can be used in law to describe a statement made in the opinion of a court that doesn’t form a necessary part of the decision. Obiter dicta may be included for illustration, perhaps as examples to support the decision.

26. Gonzo : LOCO
Something “gonzo” is bizarre or unconventional. The term might perhaps come from the Italian “gonzo” meaning “rude, sottish”.

31. Senate censure : ET TU
Shakespeare used the words “Et tu, Brute?” (And you, Brutus?) in his play “Julius Caesar”, but the phrase was around long before he penned his drama. It’s not known what Julius Caesar’s actual last words were just before he was assassinated on the steps of the Senate in Rome.

37. Opposite of spring, tidewise : NEAP
Tides of course are caused by the gravitational pull of the moon on the oceans. At neap tide, the smaller gravitational effect of the sun cancels out some of the moon’s effect. At spring tides, the sun and the moon’s gravities act in concert causing more extreme movement of the oceans.

42. Pressing : EXIGENT
Something exigent is urgent.

47. Future World setting : EPCOT
EPCOT Center (now just called Epcot) is the theme park beside Walt Disney World in Florida. EPCOT is an acronym for Experimental Prototype Community of Tomorrow, and is a representation of the future as envisioned by Walt Disney. Walt Disney actually wanted to build a living community for 20,000 residents at EPCOT, but he passed away before that vision could be realized.

52. Natural soother : ALOE
Aloe vera has a number of names that are descriptive of its efficacy as a medicine. These include the First Aid plant, Wand of Heaven, Silent Healer and Miracle Plant.

53. Curious George’s creators : REYS
Curious George is a character in a series of children’s books written by Hans Augusto and Margaret Rey. The couple wrote the original stories in Paris, taking the manuscripts with them as they fled from the city ahead of the German invasion, in 1940.