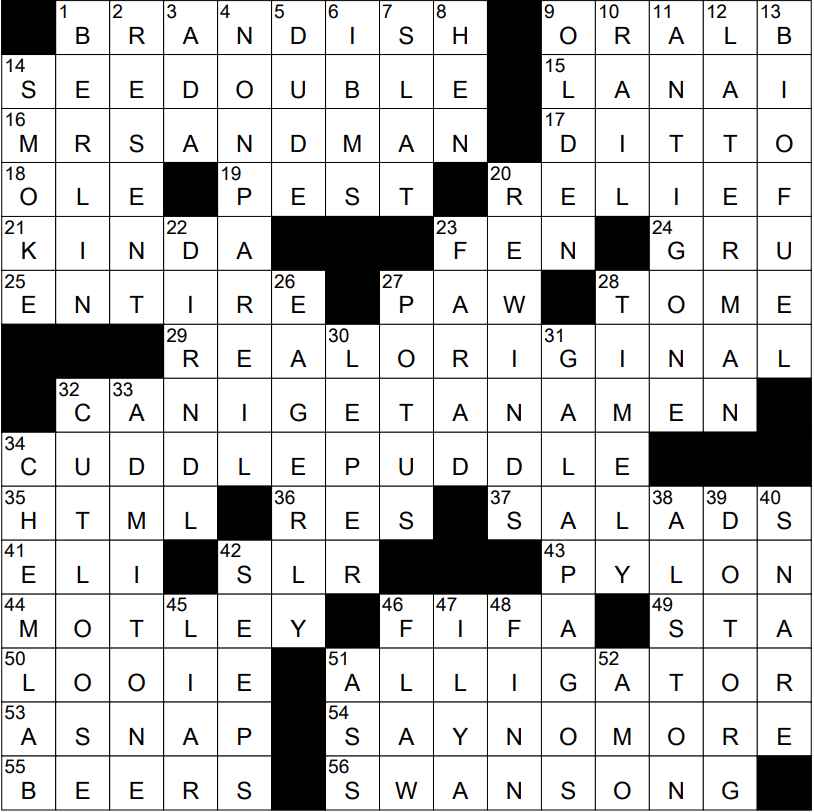 Constructed by: Ashton Anderson & James Mulhern
Edited by: Will Shortz

9 Maker of some replacement heads : ORAL-B

Marmaduke is the title character in a newspaper comic strip that has been drawn by Brad Anderson since 1954. Marmaduke is a Great Dane, and the pet dog of the Winslow family.

“Pylon” can be used as another word for “traffic cone”.

The first toothpaste in a tube was introduced by Johnson & Johnson, in 1889. Back then, toothpaste tubes were made from tin, zinc or lead.

Something described as “nonpareil” has no equal, is a paragon. “Nonpareil” was an Old French word meaning “not equal”.

6 Watson and others : IBMS

The traditional dress worn by females in Austria and southern Germany is called a “dirndl”. The dirndl originated as a hard-wearing dress worn by domestic workers in Austria in the 1800s. It was adopted as a fashionable item worn by upper classes in the 1870s.

The SI unit of capacitance is the farad, a unit that is named after the physicist Michael Faraday.

31 Setting for Melville’s “The Encantadas” : GALAPAGOS

Herman Melville mined his own experiences when writing his novels. Melville sailed from New Bedford, Massachusetts in 1841 on a whaler heading into the Pacific Ocean (a source for “Moby-Dick”). Melville ended up deserting his ship 18 months later and lived with natives on a South Pacific Island for three weeks (a source for “Typee”). He picked up another whaler and headed for Hawaii, where he joined the crew of a US navy frigate that was bound for Boston (a source for “Omoo”).

38 Charles ___, artist whose bust of M.L.K. Jr. was the first image of an African American displayed at the White House : ALSTON

Charles Alston was an artist from Charlotte, North Carolina who was active during the Harlem Renaissance of the 1920s. Some of Alston’s most famous works are murals, notably those at the Harlem Hospital and the American Museum of Natural History in New York City, the Golden State Mutual Headquarters in Los Angeles.

In music, an ostinato is a piece of melody or a rhythmic pattern that frequently recurs in a piece. A favorite work in the classical repertoire that makes particular use of the ostinato form is Ravel’s “Bolero”.

51 Something of your neighbor’s not to covet, per the Ten Commandments : ASS

The Te-Amo brand of cigars have been made in the San Andres Valley in the state of Veracruz, Mexico since 1963.