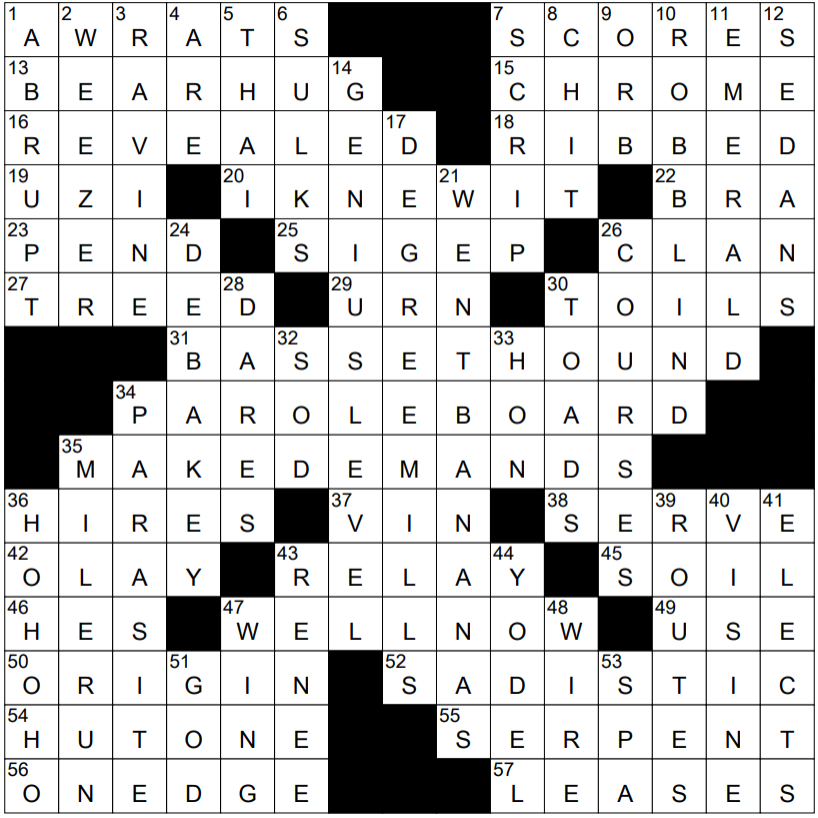 The verb “to twill” means to weave a cloth (called “twill”) that has a pattern of diagonal parallel ribs.

In the Roman Catholic tradition, “Limbo” is a place where souls can remain who cannot enter heaven. For example, infants who have not been baptized are said to reside in Limbo. Limbo is said to be located on the border of Hell. The name was chosen during the Middle Ages from the Latin “limbo” meaning “ornamental border to a fringe”. We use the phrase “in limbo” in contemporary English to mean “in a state of uncertainty”.

The Sigma Phi Epsilon fraternity was founded in 1901 in Richmond, Virginia and is sometimes known as “SigEp”.

34 Group of commuters? : PAROLE BOARD

“He’s So Fine” is a great little song that was released by the Chiffons in 1962. Famously, the owners of the rights to the song sued George Harrison in 1971, claiming that he was guilty of plagiarizing “He’s So Fine” in writing his hit “My Sweet Lord”. Harrison was found guilty of “subconscious” plagiarism. In a strange twist, the Chiffons recorded a version of “My Sweet Lord” a year before the case was decided.

“He’s So Shy” was a hit in 1980 for the Pointer Sisters. Although the title is reminiscent of the 1963 hit for the Chiffons called “He’s So Fine”, there is no relationship between the two numbers.

52 Callous to an extreme : SADISTIC

The Gorgons were feared female creatures of Greek mythology. They were three sisters who had hair made up of living snakes. Anyone who looked at their faces would be turned to stone instantly.

2 Band with the lyrics “When I was younger, I used to go and tip cows for fun, yeah / Actually, I didn’t do that ’cause I didn’t want the cow to be sad” : WEEZER

Weezer is an alternative rock band formed in LA in 1992. Apparently, Weezer’s music might be described as “emo” (emotional hardcore).

A chit is a note or a short letter. The term tends to be used these days in the sense of an amount owed (as in a poker game). The word used to be “chitty”, which is now obsolete but was closer to the original Hindi term. I feel a tad obsolete myself, because when we are at school we would be excused from class if we had a “chitty”.

The “warts” on the skin of a toad have no relation to the viral infection that can occur on human skin. A toad’s warts are colored bumps that are believed to help the animal blend more effectively into its environment.

Visine is a brand of eye drops made by Johnson & Johnson that are advertised to “get the red out”. The red in the eye is reduced because Visine contains tetrahydrozoline hydrochloride, a vasoconstrictor. The blood vessels creating the redness constrict when Visine is applied, and you “get the red out” as the blood is “squeezed” away from the surface of the eye.

Renée Taylor is perhaps best known for playing Fran Drescher’s mother in the sitcom “The Nanny”.